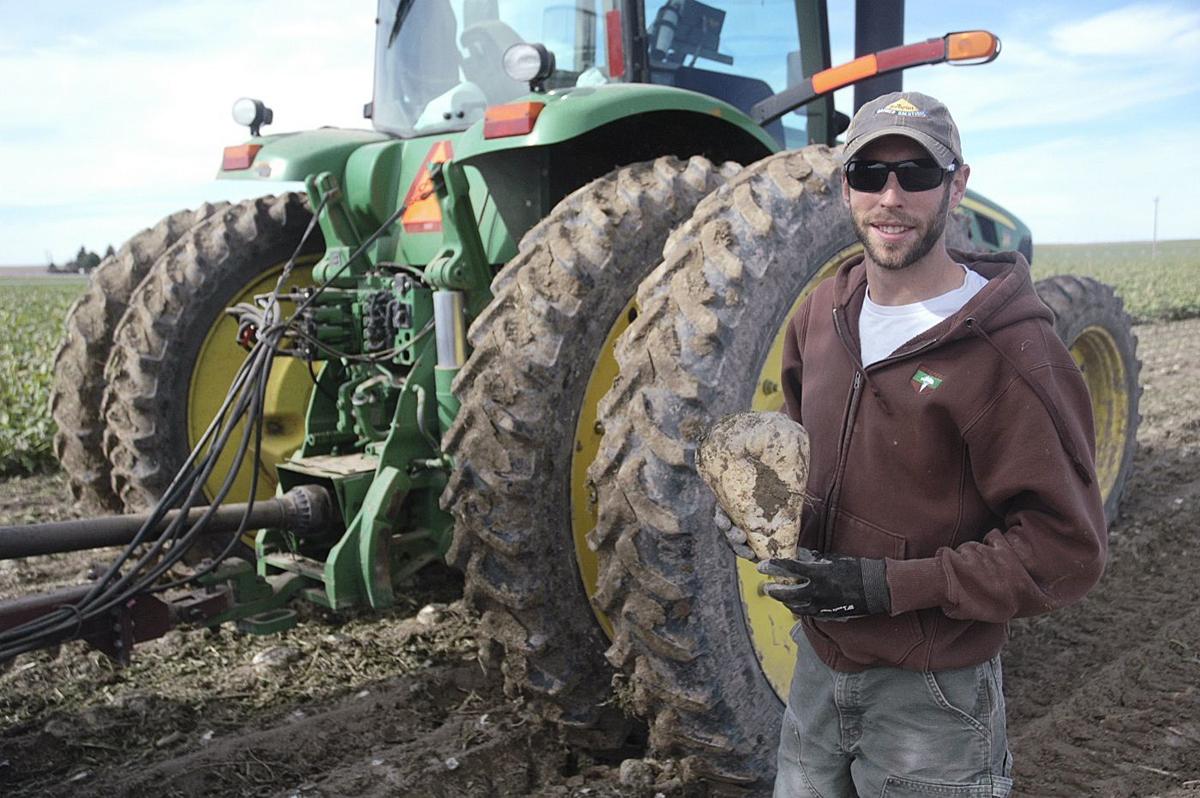 Wesley Pahl shows off an especially large sugar beet harvested Oct. 7 in Aberdeen, Idaho. The Pahl family believes their yields are strong, but sugar levels are low this season. 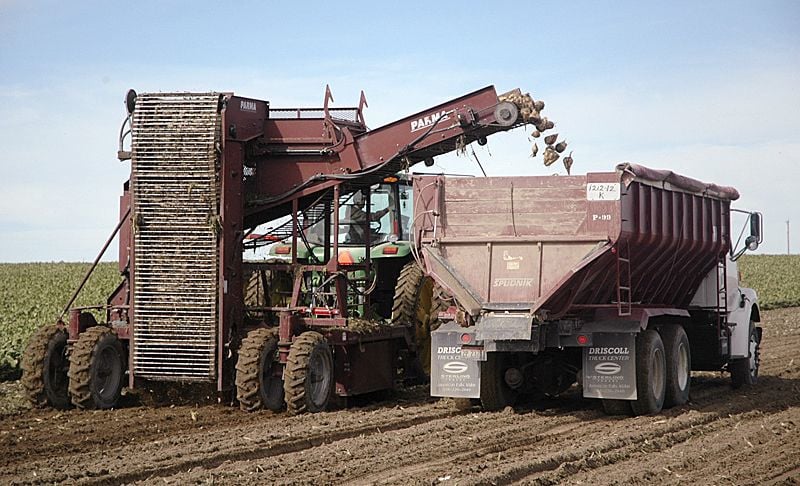 Sugar beets are harvested Oct. 7 at Pahl Farms in Aberdeen, Idaho. Grower Jeff Pahl believes his yields are strong, but sugar levels are a bit low in this year's crop.

Wesley Pahl shows off an especially large sugar beet harvested Oct. 7 in Aberdeen, Idaho. The Pahl family believes their yields are strong, but sugar levels are low this season.

Sugar beets are harvested Oct. 7 at Pahl Farms in Aberdeen, Idaho. Grower Jeff Pahl believes his yields are strong, but sugar levels are a bit low in this year's crop.

Aberdeen area growers had early harvest from Sept. 17-21. Rather than shutting down for the standard two-week period prior to their general harvest, they resumed digging on Sept. 30, due to a shortage of canal water.

Beet growers need moist soil to facilitate unearthing beets without breaking off the tops. Predominately, growers with fields served only by canal water took advantage of the early start, though some have opted to gamble on timely rain to moisten fields and allow more time for cool, fall weather to elevate low sugar levels.

“The primary purpose of doing (harvest) a little bit early was because there wasn’t going to be water in the canal to get their beets out at the normal time,” said Steve Howser, general manager of Aberdeen-Springfield Canal Co. “They irrigated pretty heavily on the last week to 10 days we had water in the canal in hopes that the moisture would hold as long as possible.”

Grower Dwight Horsch dug one field early, unable to access well water. Through Oct. 8, Horsch was about halfway through his sugar beet harvest, concerned leaving them in the field for too long would elevate the risk of them freezing in the ground.

Though Amalgamated Sugar Co. had it’s most widespread sugar beet replant in history this spring due to late frost, Horsch believes he’s now digging one of his top three yielding crops, at more than 40 tons per acre. His tonnage is still slightly less than last year, when Idaho growers had a record crop.

Though a hot summer helped the replanted beets catch up, Horsch acknowledged, “Part of the reason we got low sugars is they’re young beets.”

His sugar levels have come in at about 14 percent this year, compared with 17-18 percent last fall. Though sugar prices have also been low, Horsch believes the strong yields will give him a profitable crop.

Aberdeen grower Jeff Pahl believes his tons per acre will be in the upper 30s to low 40s, which could put this fall’s crop slightly ahead of the crop he produced last season. Pahl, who started harvesting on Oct. 8, worries about low sugars and hopes a recent turn toward cool weather will raise them a bit.

George Schroeder, a Treasure Valley crop consultant with Amalgamated Sugar, said growers in his region started harvesting beets on Oct. 8. Companywide, he said, beets are averaging about 35.5 tons per acre, down about a half ton from last season. He’s heard sugar levels in eastern Idaho have been down by at least a point.

Hundreds of sugar beet acres in his service area had foliage damaged by an early September hail storm, which left the plants to focus on regrowing leaves rather than accumulating sugars. He said those growers will wait until the end of the month to harvest, hoping to recover tonnage and sugar content.