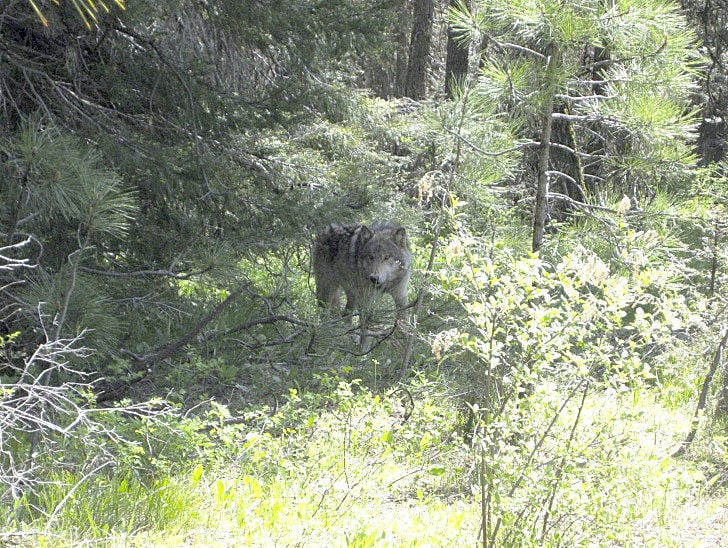 The state's wolf population grew for a ninth straight year in 2017, but the geographical distribution of breeding pairs shrank. 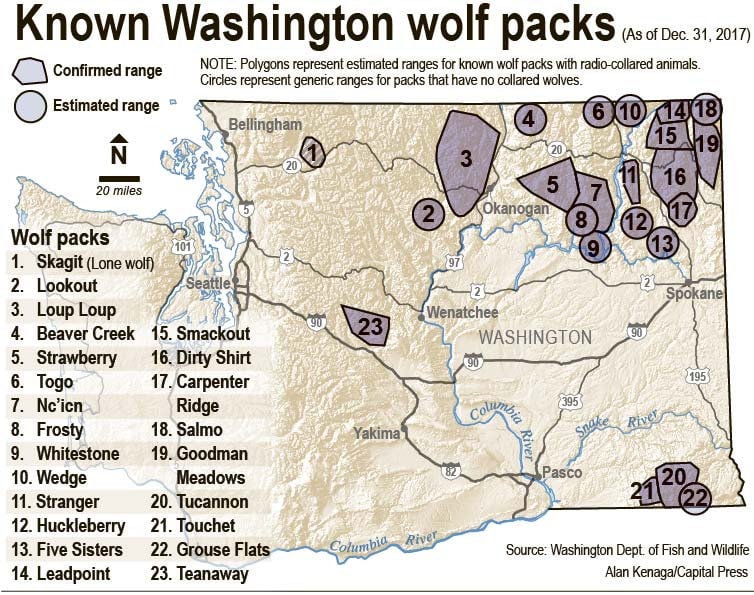 The state's wolf population grew for a ninth straight year in 2017, but the geographical distribution of breeding pairs shrank.

Washington’s wolf population grew for a ninth straight year in 2017, but the predators were more concentrated than ever in four northeast counties, and the state actually lost ground by the standard it measures recovery.

Wildlife managers counted 14 breeding pairs at the end of 2017, compared to 10 the year before. But the geographical distribution of reproducing packs, the prime recovery goal, shrank.

Wolves will remain a protected species statewide until all three recovery zones have at least four breeding pairs. Eastern Washington reached that threshold in 2011.

The new figures, presented Saturday to the Fish and Wildlife Commission, show that wolves aren’t spreading out, and that northeast Washington is left with more and more wolves while statewide recovery is still years away, said Scott Nielsen, president of the Cattle Producers of Washington.

“It is our worst nightmare coming true,” he said. “What we were concerned would happen is happening.”

Fish and Wildlife counted 122 wolves, up from 115 at the end of 2016. About 80 percent of the wolves are in Ferry, Okanogan, Pend Oreille and Stevens counties.

“We are absolutely saturated up here,” said Nielsen, a Stevens County rancher. “What’s not fair is we’re going to have to bear the brunt of this in northeast Washington while the wolves decide to disperse.”

The 6 percent growth last year was low compared to recent years. Over the previous three years, the population grew by at least 27 percent. The growth in 2017 occurred in Eastern Washington. The number of wolves in the North Cascades declined slightly.

Fish and Wildlife wolf specialist Ben Maletzke said Monday the department remains confident that wolves will spread out. Wolfpacks are running out of room in the northeast, he said.

“The territories are kind of filled in,” Maletzke said. “We aren’t going to see much more of a ramp-up in northeast Washington. I think there will be a leveling out, and we’ll see more in the North Cascades.”

Fish and Wildlife said it expects to have a complete annual report finished by March 30.

“I don’t consider it a step backward by any means,” he said.

Maletzke noted that a male wolf has been roaming in eastern Skagit County, the state’s first confirmed wolf in Western Washington in decades. Wildlife biologists trapped and put a radio collar on the animal last year. So far, biologists have not seen him with a mate, but he is staying in the area.

Maletzke also noted that the North Cascades had three wolfpacks, the same as in 2016. They could produce pups this year, he said.

Fish and Wildlife confirmed in 2017 that wolves attacked and killed at least eight cattle, one fewer than the year before.

Nielsen said the number downplays the effect wolves have had on ranchers. In some cases, too little remains of a cow or calf to positively identify the predator. An untallied number of cattle are never found, and some ranchers have left wolf territory, he said.

“The more wolves we have, the more conflicts we have,” Nielsen said. “I believe it is worse than ever.”

Conservation Northwest Executive Director Mitch Friedman said in a statement that he was happy to see the population continue to grow and that the number of breeding pairs increased.

“We are disappointed that more wolfpacks have not yet become established in Washington’s North and South Cascades, despite quality habitat available in those areas,” he said. “It’s our hope that in 2018 we’ll see further expansion of wolves into the South Cascades and Western Washington, and the progress towards state recovery goals such confirmations would bring.”

Washington lawmakers this month directed Fish and Wildlife to study moving wolves from northeast Washington to unoccupied territories to the west. The study could take more than a year. Legislators have rejected proposals to take wolves in northeast Washington off the state-protected species list, giving wildlife managers more flexibility to limit the population in the region while leaving the recovery plan in place elsewhere. Wolves are not federally protected in the eastern one-third of the state, but are in the western two-thirds.