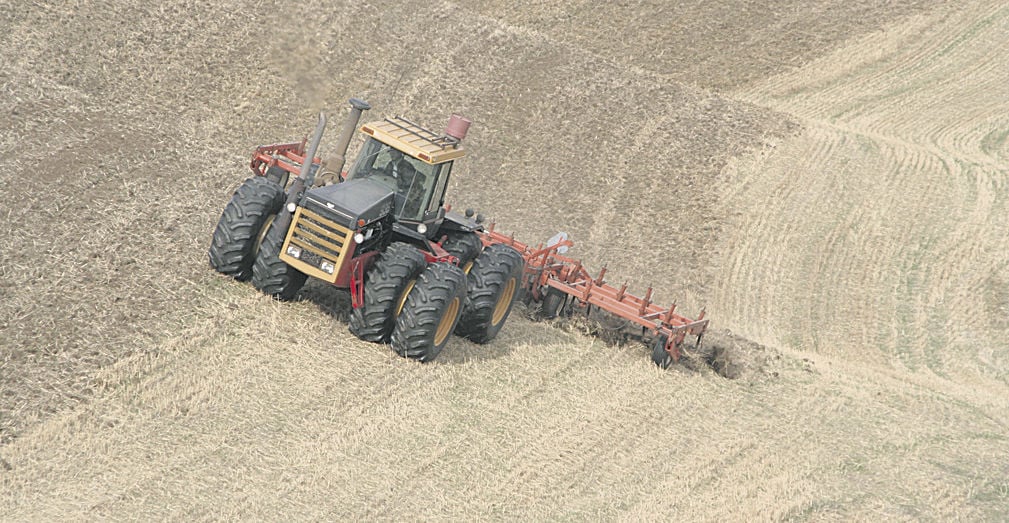 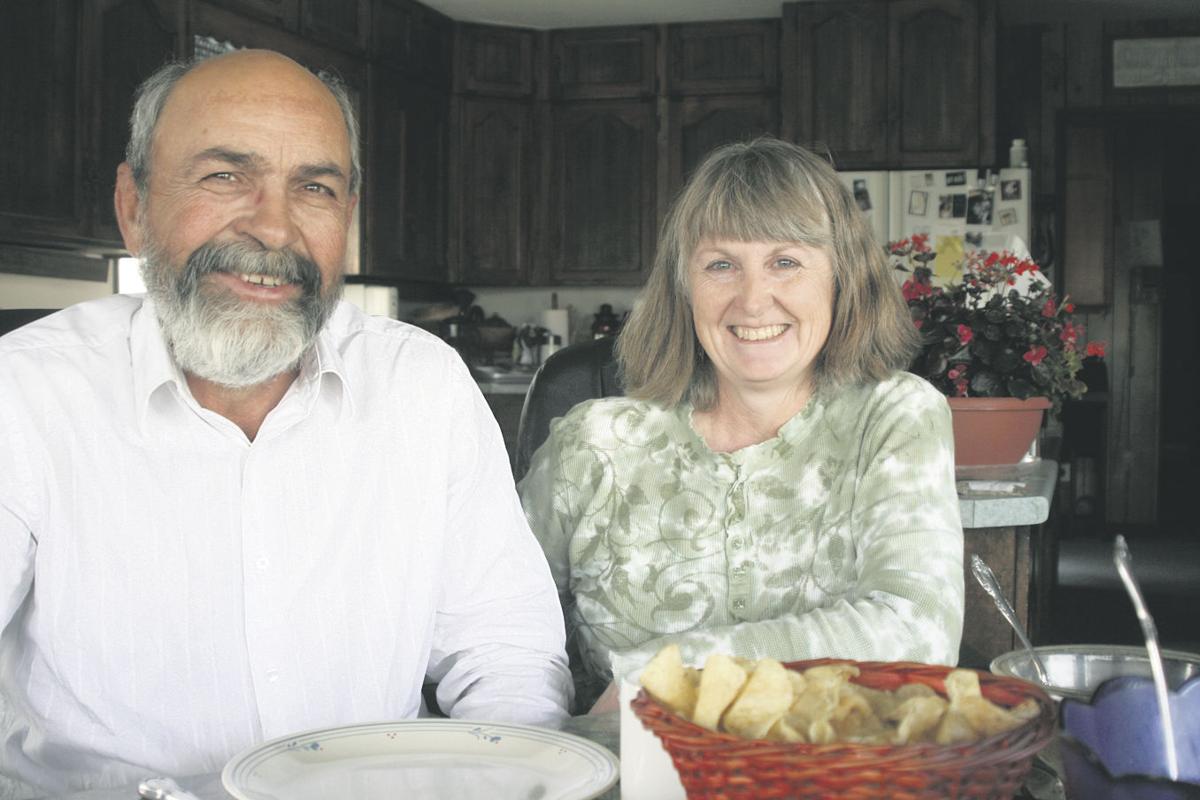 Dan Wheat/Capital Press Steve and Dianne Appel eat lunch in their farmhouse recently. He says she has been a vital support in his 37 years in the Farm Bureau. 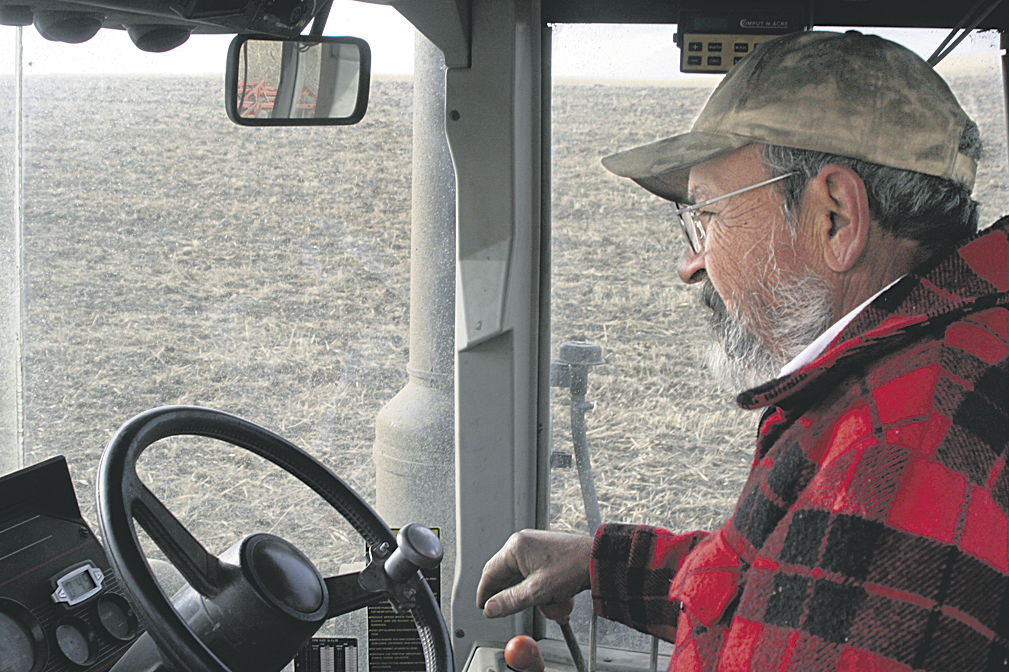 Dan Wheat/Capital Press Steve Appel at the controls of his 1986 Versatile tractor prepares to take a lap chiseling, breaking up wheat stubble on his 1,930-acre farm. 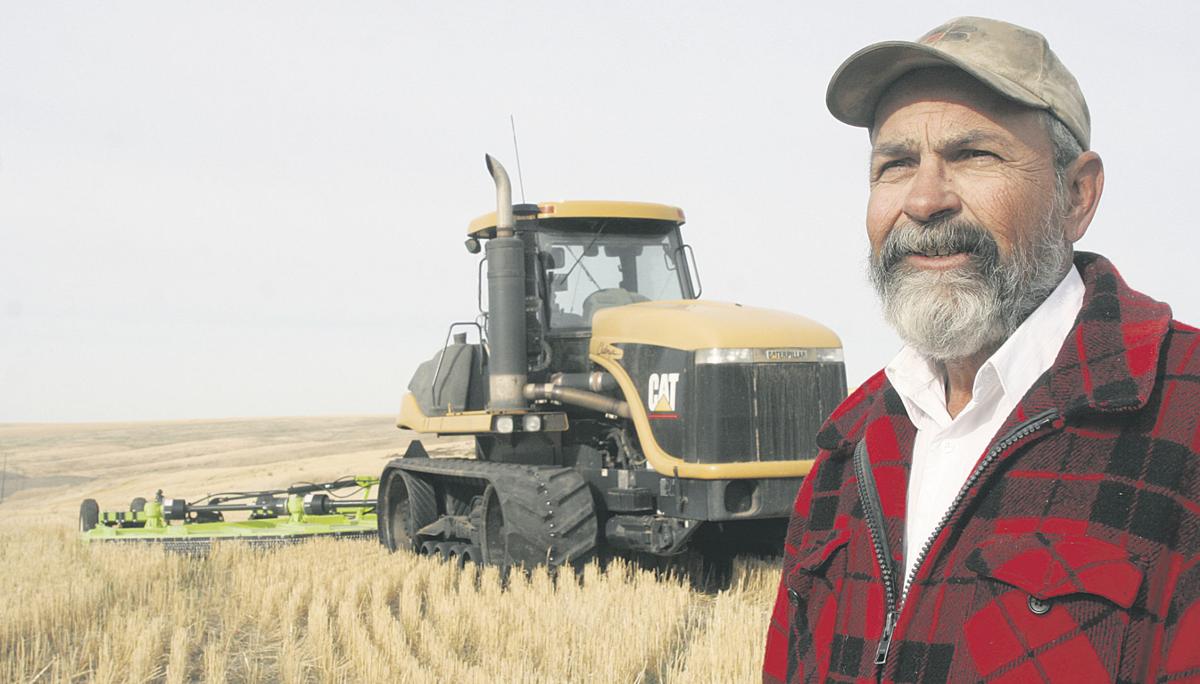 Dan Wheat/Capital Press Steve Appel stands next to one of his main workhorses, a Cat Challenger, on Oct. 26 in a field near Dusty, Wash. Appel is retiring after 17 years as president of Washington Farm Bureau.

Dan Wheat/Capital Press Steve and Dianne Appel eat lunch in their farmhouse recently. He says she has been a vital support in his 37 years in the Farm Bureau.

Dan Wheat/Capital Press Steve Appel at the controls of his 1986 Versatile tractor prepares to take a lap chiseling, breaking up wheat stubble on his 1,930-acre farm.

Dan Wheat/Capital Press Steve Appel stands next to one of his main workhorses, a Cat Challenger, on Oct. 26 in a field near Dusty, Wash. Appel is retiring after 17 years as president of Washington Farm Bureau.

Dusty, Wash., appears as not much more than a grain elevator, store and a few houses, a wide spot on Highway 26 as it weaves through the hills of Palouse wheat country.

While a small town, one of its sons has cut a big swath in the Farm Bureau world.

Steve Appel, 59, who likes to call himself "a dirt farmer from Dusty," is retiring after 17 years as president of the Washington Farm Bureau at its annual convention next week. He will remain active in the organization, though, as he has for 37 years. It's in his blood.

He's been president longer than any of his predecessors and served as vice president of the American Farm Bureau Federation during seven of those years. He's traveled abroad working on foreign market access and met Cuban dictator Fidel Castro and President George W. Bush, but he said he's most content back home in the rolling wheat fields of Dusty.

Farm Bureau staffers say he will be missed and that he's leaving mighty big shoes to fill. He's known as a detail man, good at developing and building support for policies. He's personable and persistent, they say.

"He's done an outstanding job leading the Washington Farm Bureau," said Bob Stallman, president of the American Farm Bureau Federation. "And as vice president at the national level, he helped me do my job."

Appel chaired policy development for Stallman, and was "adept" at gaining grassroots support and accomplishing goals.

"He is very family-oriented and how you treat your family and what you believe about family is core to the kind of character a person has," he said.

The Washington Farm Bureau has "an excellent staff and good programs" and Appel did a lot of leadership development so there's good people ready to step up, Stallman said.

Several people may run for state president at next week's convention in Yakima.

Appel grows wheat and barley on a farm four miles north of Dusty, where he grew up. It was started by his great-uncle, Frank Scholz, in 1920. Scholz was a teenager when his family, from Knoxville, Tenn., settled at Dusty to be near other German settlers.

Seventh in a Catholic family of nine children, Appel grew up in the 1950s and '60s helping on the farm and remembers combines pulled by tractors.

Connie Young, lifelong neighbor at the next farm two miles away, was Connie Mader when they were growing up. Their families were friends. The Appel and Mader children rode the school bus together, 45 minutes each way, to and from Colfax.

"Steve's always been a good neighbor. He was the big brother I didn't have," she said. "He made a dune buggy and gave me a fast ride I'll never forget."

Now a bookkeeper at Dusty Farm Co-op, Young said the community is glad Appel was Farm Bureau president. "He's been a very good voice for agriculture," she said.

"Sometimes you know someone well and think they shouldn't be in there, but Steve's one that should be. He's a good guy," said Dick McNeilly, another lifelong neighbor.

Appel's parents were 4-H Club leaders and all their children were members. Appel also joined Future Farmers of America, now called FFA. He's a fan of both and says they prepared him more for his future than high school football.

"How often do you need to know how to tackle people? But speaking in front of people is something I had to do all of my life," he said.

Appel met and married his wife, Dianne, while they both attended Washington State University. He received his bachelor's degree in agronomy in 1974. He went into partnership with his father, Don, on the farm and that fall joined Farm Bureau. His dad was a member but not active.

In FFA, Appel enjoyed the "nuts and bolts" of parliamentary rules and running meetings efficiently. That skill and appeal quickly promoted him at Farm Bureau. He was a county and state convention delegate, on the state Young Farmer and Rancher Committee and, in his second year, parliamentarian at the state convention.

Appel enjoyed policy development and liked that Farm Bureau is a grass-roots organization where policy starts at the local level and moves up.

"We needed a builder who could see the future. That's where Steve did his best work, deciding the direction and getting us there," he said. "Most importantly, he reached out to the grass roots and got people active. The organization was poised to take off after that."

Membership grew from 7,000 to 41,000 during his tenure without a single membership drive, Batts said.

People joined because the Farm Bureau identified issues, provided leadership and got things done, he said.

Members were trained in activism, to go home and make calls and send e-mails to legislators and members of Congress.

"We matured as a political force in Washington during his time, and the best part of that is we've been able to improve the business and regulatory climate for farmers across the state," said John Stuhlmiller, Washington Farm Bureau director of government relations.

An example, he said, was in the 1990s when the state Department of Natural Resources wanted farmers and forest owners to improve roads, in some cases at a cost of $10,000 a mile, or abandon them. The Okanogan County Farm Bureau, inspired by Appel, held two meetings in opposition, each attended by 1,000 people, that ultimately led to legislation preventing the change.

Other wins, Stuhlmiller said, were the Columbia River Program in 2006, moving the state forward in finding new water sources. And more recently, two years of negotiations at the Ruckelshaus Center to improve agricultural activities in critical habitat areas, allowing counties to opt out of some state Growth Management Act mandates.

The Washington Farm Bureau has championed private property rights and started one of the largest trade association health care plans in 2000.

Appel supported Stallman for national president in 2000 and became vice president a year later. They shared an interest in improving foreign market access.

A highlight for Appel was having the Washington Farm Bureau host the American Farm Bureau Federation national convention in Seattle in 2010. It was the first time the convention had been there in 50 years.

One of his biggest disappointments, Appel said, is the lack of immigration reform or a workable guestworker program.

"I testified before Congress on an H-2A reform bill in probably my second year as president (in 1995)," he said. "I listened to congressmen say they would get it fixed. We're still talking about it today. Not a darn thing has been done. It's become a political football."

Appel also is concerned about the threat to animal agriculture from the Humane Society of the United States and like-minded organizations. "Most of the claims they make are not based on a generalized reality," he said. "They find one bad player and play it over and over again and try to paint all of animal agriculture with the same brush."

Appel is "quietly dynamic" and patient with people, pulling them along, Batts said. "When he spots someone who would be good in a particular Farm Bureau role he goes about doing whatever to get them there."

Appel has been dedicated and put a lot of time, thought and effort into his job, with a lot of traveling as a non-salaried volunteer, Stuhlmiller said.

"His easy-going manner and plain farmer speak enabled him to get our message out," he said.

"We didn't always see eye-to-eye, but if something needed attention he always gave it. Not everyone has done that," Farrens said.

"Both Steve and I are old school. I call it the Farm Bureau way. As officers, we sometimes didn't agree with Farm Bureau policy but we stuck with it because that's what we were elected to do. He never went off and did his own thing," Farrens said.

"His patience sometimes astounds me because I wouldn't have the patience with some people that he does. He always made time. I think that's why he's been elected 17 times," he said.

Dianne said he relates to people of all walks of life and communicates so that they understand an issue and what needs to be done.

A leader has to be a cheerleader, Appel said. A key to success is maintaining active members. "You have to convince them they can make a difference if they just engage," he said.

Appel credits the support and activity of members, staff and Dianne, saying she probably has been his strongest supporters.