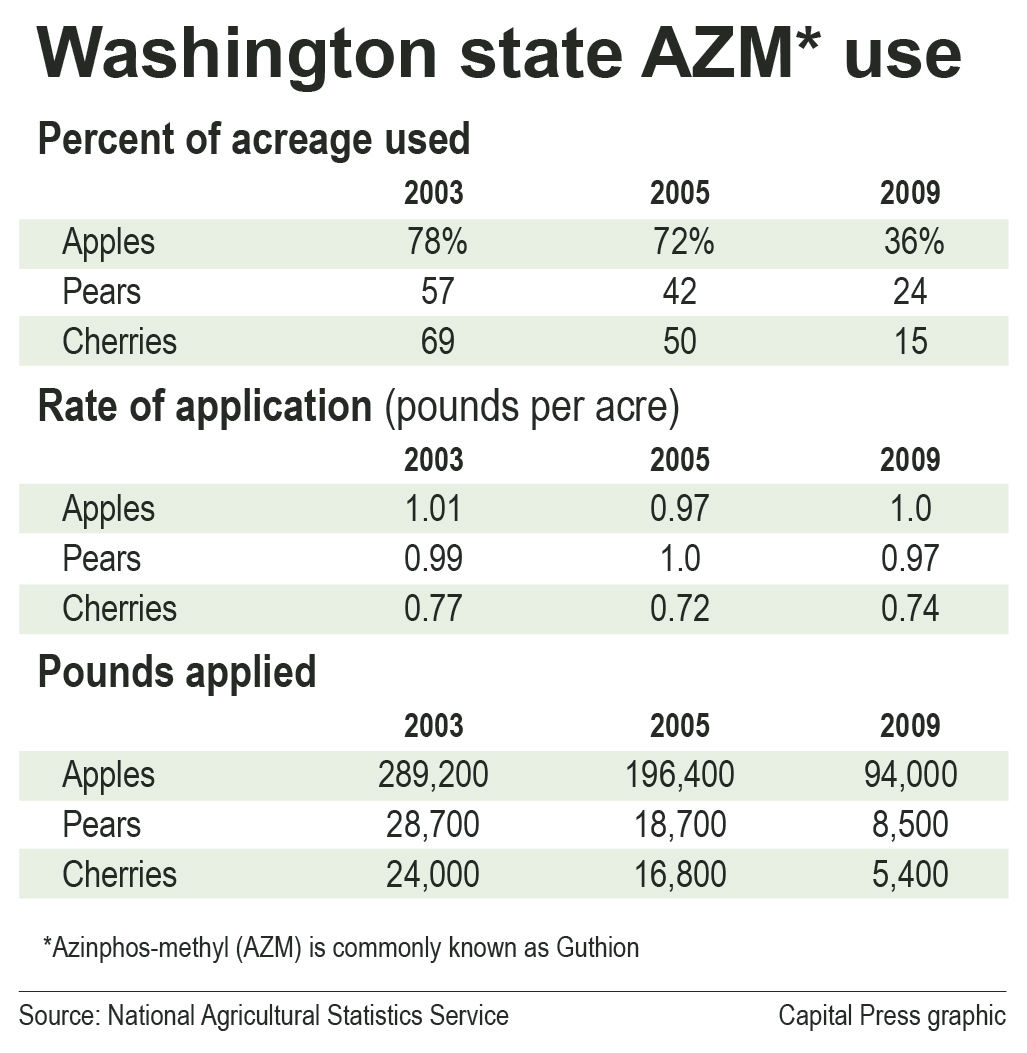 The latest federal statistics show Washington orchardists are using a lot less of a key pesticide than they did five years ago, but a tree fruit specialist says it comes at a price.

About 94,000 pounds of azinphos-methyl, also known by the initials AZM and the trade name Guthion, were applied to 36 percent of Washington's apple acreage in 2009, according to the National Agricultural Statistics Service.

The pesticide is primarily used to combat codling moth on apples, pears and cherries. It is being banned in 2012 by the federal Environmental Protection Agency because of potential health risks to farmworkers.

"So we are seeing a resurgence of insect and mite problems we haven't seen since the 1950s and 1960s," he said.

"We've added five or seven new products, each with unique attributes and toxicities to beneficial organisms," Smith said. "So we have to work out entirely new ways of timing and rates and applications to regain the integrated pest management we've developed over the years."

"We're still doing pretty good. It's not a meltdown situation but it's causing us issues and time and effort and money," he said.

In June 2006, the EPA announced it would ban the use of AZM on several crops and on tree fruit in 2010. The ban was postponed to Sept. 30, 2012, to give the tree fruit industry more time to make the transition.

Environmental groups have long called for the ban, saying AZM is toxic, derived from nerve poisons and asserting it threatens farmworkers' health. The agricultural industry says it's safe if used properly and has been needed to fight pests that, if found in fruit, can shut down markets.

"That's a 50 percent drop and it was roughly 50 percent before that (from 2003 to 2005)," said Kirk Mayer, manager of the Washington Growers Clearing House Association in Wenatchee, commenting on the 2009 numbers. "It's very good news."

WSU and the Washington Tree Fruit Research Commission have operated the tree fruit pesticide transition program for about four years to help growers move from AZM and other organophosphates to less toxic "softer" pesticides.

A state program monitoring blood of pesticide applicators is in its seventh year and has not yet shown even one industrial insurance claim related to handling organo-phosphates, Mayer said.

Smith said foreign countries are more comfortable with residues of older pesticides on fruit than residues of new ones.

"We have to prove residues of new safe products are actually safe so it creates issues with exports and drives sales desks and orchard managers half crazy," he said.

Some 5 percent of the public demands elimination of AZM and some 80 percent goes along, he said. When it is gone, attention will turn to something else, he said.

"By nature pesticides are toxic to something and are intended to be," Smith said. "So they are all expendable in the search for absolute safety that we seem to seek as a society."