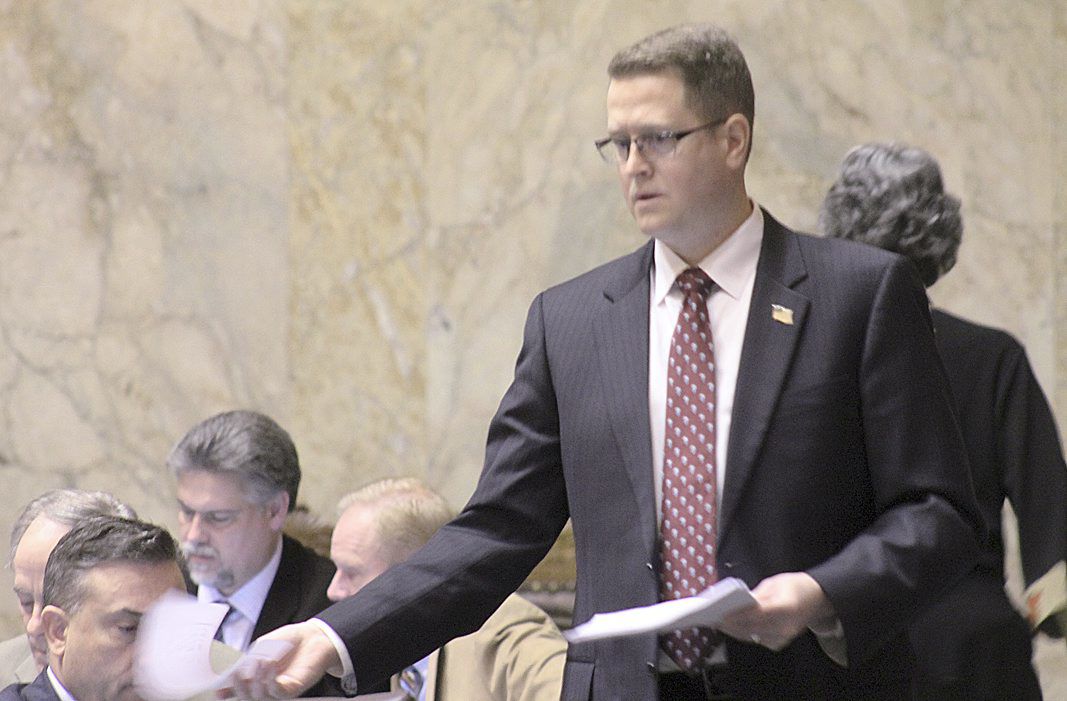 Don Jenkins/Capital Press Spokane Republican Matt Shea passes out papers March 5 on the floor of the Washington state House. He says Eastern Washington would be strong economically on its own. 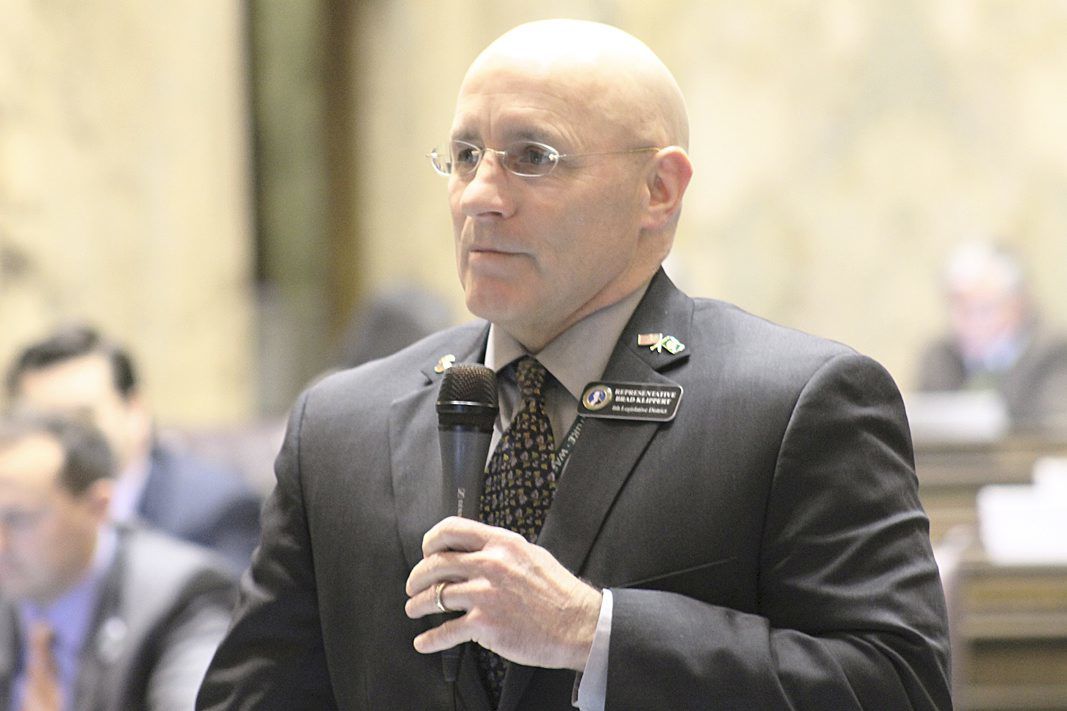 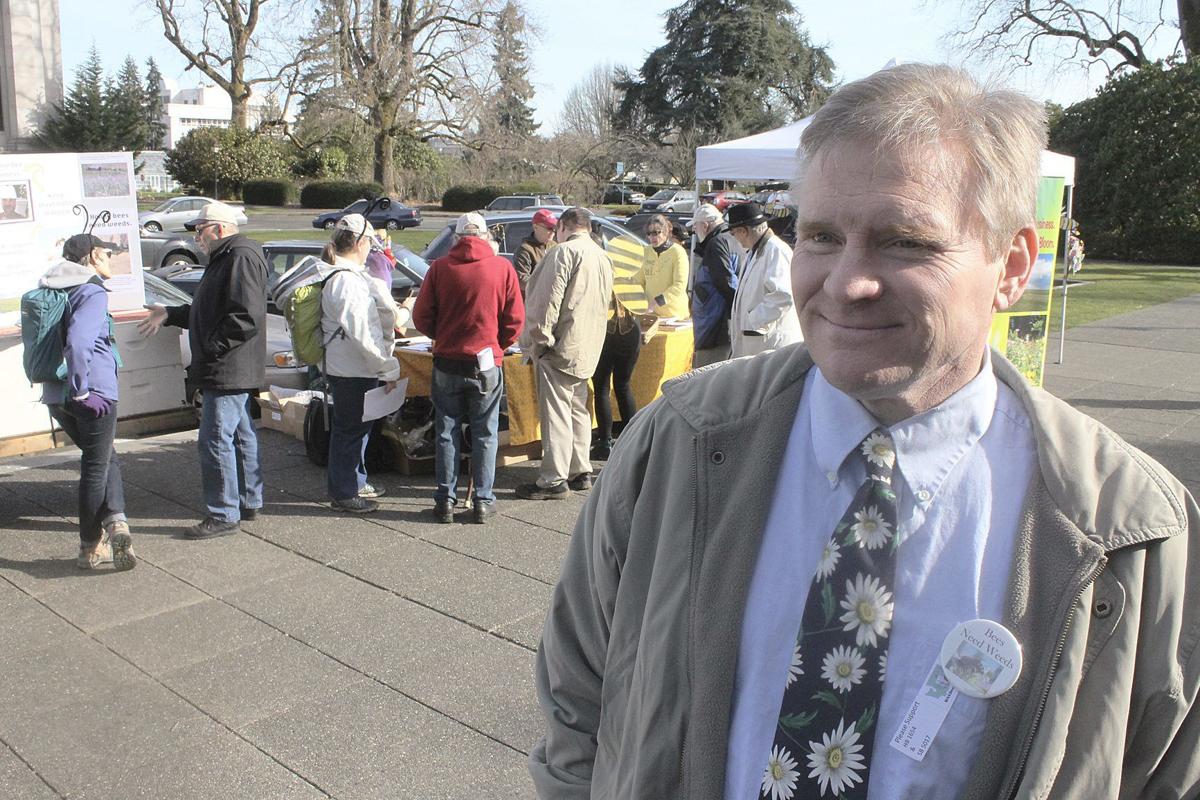 Don Jenkins/Capital Press Central Washington beekeeper Tim Hiatt stands March 5 on the Capitol Campus in Olympia for Honeybee Awareness Day. Even beekeepers view issues differently depending on which side of the mountains they're on, he says. 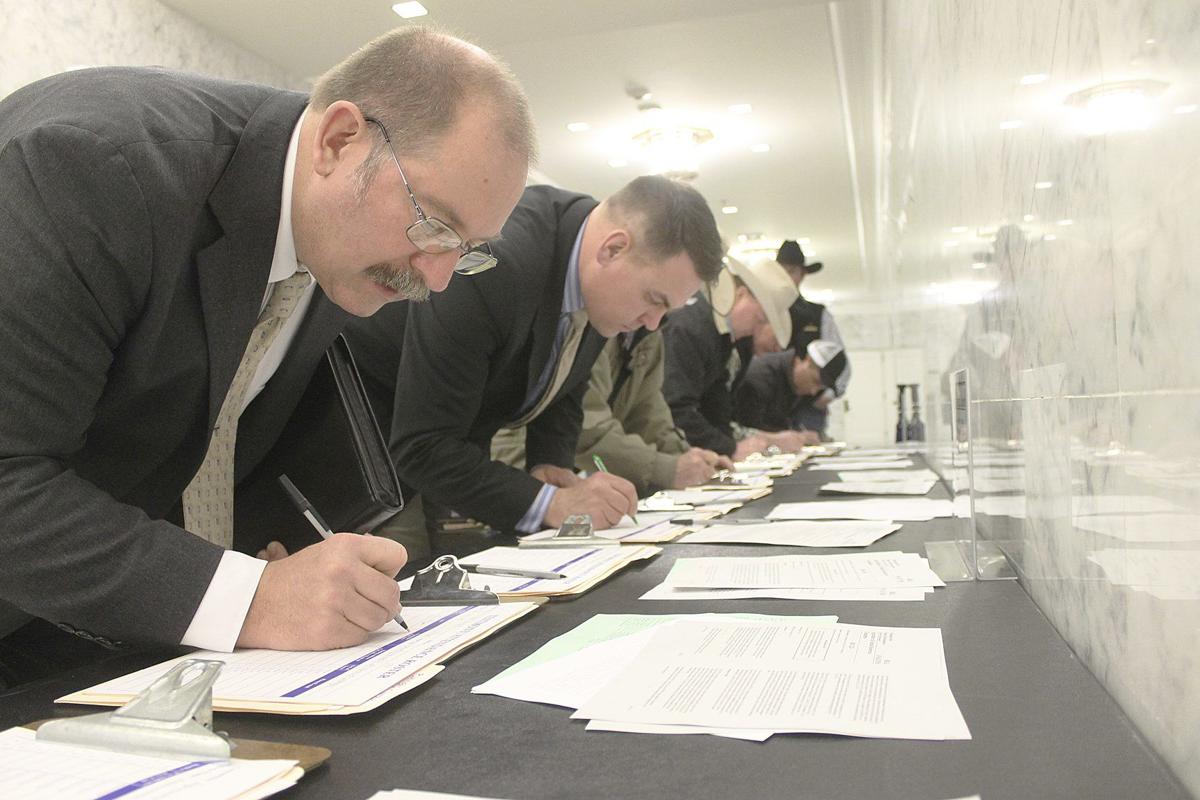 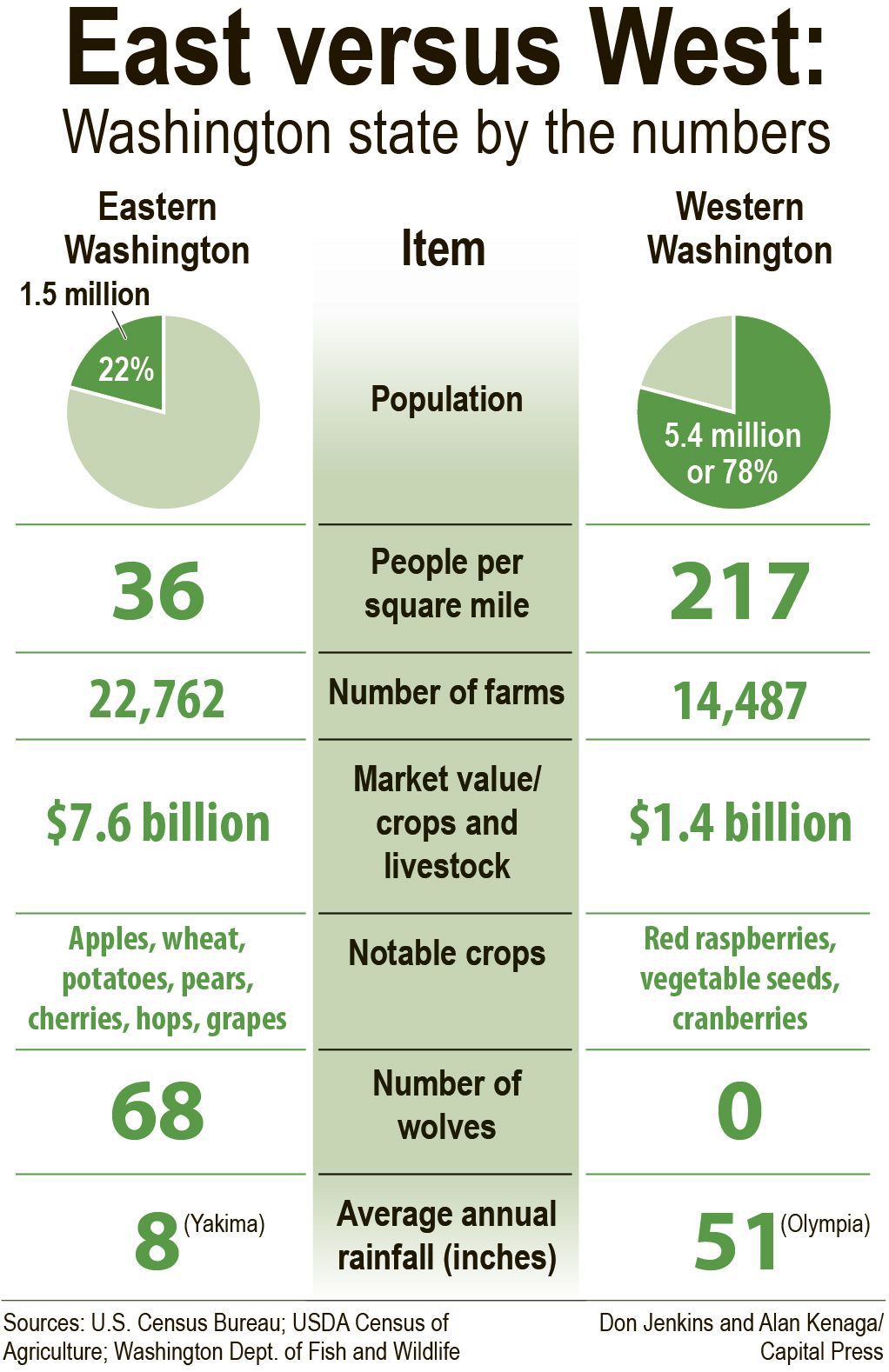 Don Jenkins/Capital Press Spokane Republican Matt Shea passes out papers March 5 on the floor of the Washington state House. He says Eastern Washington would be strong economically on its own.

Don Jenkins/Capital Press Central Washington beekeeper Tim Hiatt stands March 5 on the Capitol Campus in Olympia for Honeybee Awareness Day. Even beekeepers view issues differently depending on which side of the mountains they're on, he says.

OLYMPIA — Residents of Eastern Washington are frustrated with the more populous Westside of the state. And nowhere was that frustration more prominent than one day last month in the Capitol. On the docket were cougars and wolves, two hot-button issues that split the state right down the center of the Cascade Range.

In one hearing, Eastside ranchers were asking senators to loosen the state’s law against using hounds to chase cougars and keep the predators away from livestock.

In another hearing, an Eastside county commissioner told legislators that his constituents were fed up with wolves.

They continue to attack cattle and sheep, costing ranchers tens of thousands of dollars. All the while wolves remain protected under state and federal endangered species laws that draw most of their support from Westside groups and individuals.

In the weeks since, lawmakers have agreed to take a close look at the wolf problem. The hounds, however, will remain on the leash.

For the day, Eastern Washington was 1 for 2. Not bad, considering the Westside’s population — and representation in the Capitol — is more than three times as large as the Eastside’s.

The state’s longstanding east-west divide has popped up several times this legislative session, and it usually involved agriculture. Divisive issues such as wolves, cougars, trails and even honeybees have all surfaced this session in the state Capitol.

It’s not surprising, or new. The issues change, but the division between Eastern and Western Washington — sometimes called the Cascade Curtain — predates statehood. As the pioneers debated how best to divvy up the Oregon Territory into states, they argued about East versus West.

More than 125 years later, some Eastside lawmakers want a re-do.

Kennewick Rep. Brad Klippert and Spokane Valley Rep. Matt Shea both introduced bills this year to study carving out a 51st state on the Eastside.

Shea said he was taking up the challenge of liberal pundits who opine the poorer Eastside holds back the Westside’s progressive agenda.

If set free, the Eastside, with its orchards, farms, ranches and minerals, would be economically strong, Shea said.

“Give us a chance to prove the naysayers wrong,” he argues.

Klippert complains the Westside has imposed such issues as gay marriage, recreational marijuana and gun control on the Eastside. For him, the last straw was the Seattle City Council dropping Columbus Day in favor of Indigenous Peoples Day.

“I have nothing against indigenous people, but that’s a rewriting of the history book,” he said.

“We constantly have to live by their principles and values, and I’m tired of it, and so are a lot of people,” Klippert said.

Neither Shea’s bill nor Klippert’s bill got a hearing.

Klippert said he won’t give up. “I’ll stand by this plan as long as I’m an elected official.”

The Eastside has clout in Olympia. Senate Majority Leader Mark Schoesler is a Ritzville farmer. But many state policies are determined by the governor and other statewide officeholders, elected Supreme Court justices or statewide ballot measures and initiatives promoted by Westside interests.

“But when it’s one of those issues that involves both sides of the state, it’s a lost cause for this side of the state,” he said.

For example, the ban on using hounds to hunt cougars was passed by initiative in 1996. Since then, lawmakers have eased the ban, but only for limited times in a few places.

Klickitat County Rancher Neil Kayser said the hound ban is an example of a Westside policy “trickling over the hill (and) we have to deal with it.”

“People on the Eastside are good stewards of the land, but we have to use the land,” he said. “If we were poor stewards … we wouldn’t be in business.”

Kayser said he’d be for splitting the state.

“Don’t get me wrong, there are good people on the Westside,” he said. “We just have a different lifestyle and view on things.”

“What happened to that concept — One Washington — on the wolf issue?” asks Stevens County Commissioner Wes McCart. Ranchers in that northeastern Washington county have for years been dealing with wolf packs that attack their livestock.

McCart has pressed lawmakers to recognize that when it comes to wolves not all “stakeholders” have as much at stake.

“I think we have two categories of stakeholders: Those who want wolves and those who are living with wolves,” he told a House committee in February.

In an interview, McCart said he wished people on the Westside would “take the time to put themselves in the shoes of other folks.”

McCart has spoken in favor of taking a look at splitting the state. “It’s unfortunate we would ever have to have that conversation,” he said.

In 2005, a Senate committee held the last legislative hearing on dividing the state. The committee’s chairman, a Puyallup Democrat, said he wouldn’t move the bill along, but he wanted to give Eastside county commissioners a chance to air their grievances.

“We may entertain this bill every year,” said the chairman, Jim Kastama.

“We’re about as serious as we can get about this bill,” he said.

For Honeybee Awareness Day at the Capitol this month, Grant County beekeeper Tim Hiatt wore a tie, befitting someone on a business trip.

Hiatt is not a backyard beekeeper. He has 12,000 hives that pollinate California almonds in late winter before returning to Washington to pollinate tree fruit. His customers and neighbors are farmers. He’s not joining the push to ban pesticides to save bees, a position that has support among some Westside beekeepers who don’t provide pollinating services.

“For beekeepers, there’s a huge divide between east and west,” Hiatt said.

“I get frustrated with folks like the Sierra Club who want to clamp down on pesticide use,” Hiatt said. “I guess it’s a constant source of frustration. Those who want to restrict agriculture like to eat.”

Branden Spencer, the Adams County rancher, said he felt the east-west divide in January at a meeting in Tumwater of the State Parks Commission.

The commission voted to charge agricultural producers to drive on state recreational trails that bisect their farms and ranches. Spencer has miles of trails crossing his land. Permits will come with conditions to prevent producers from getting in the way of hikers, cyclists and equestrians.

Spencer said parks commissioners didn’t “grasp how desolate the area we live in is.”

Before there was an east-west divide, there was a north-south divide, which was decisive in setting the Washington-Oregon border.

In 1851 and 1852, Oregon Territory residents north of the Columbia River held conventions to draw up a petition to ask Congress for their own territory. At the time the Oregon Territory included what would become the states of Washington, Oregon, Idaho and parts of Montana and Wyoming.

Northerners complained that reaching a judge took longer than traveling from Missouri to Massachusetts.

“There is now about three thousand souls North of the Columbia,” according to the petition. “They have raised a large amount of produce, wheat, oats, potatoes, onions, etc. for exportation, but with the many abuses of their rights and neglected condition in their civil immunities as Citizens, it is impossible for them to prosper in commerce or advance one step in the improvement of Roads & Highways.”

Congress granted the petition and in 1853 broke up the Oregon Territory and formed the Washington Territory from the northern half. That settled the north-south divide. The east-west divide became an issue as Oregon sought to become a state.

A delegate to Oregon’s constitutional convention in 1857, Charles Megis of Wasco County, proposed setting the boundary at the Cascades, freeing up the east to form its own state, according to a history posted on the Oregon Secretary of State’s website.

Megis argued that it’s a “fixed fact in political science, the great natural boundaries are to be observed.” Invoking the image of a mythological demon, Megis said domination by the more populous Westside would be “hanging over us like an incubus.”

Megis said it would be tough, but the east could stand on its own. “Our country...is bordering upon Indians; danger hangs over us, but we shall try to take care of ourselves.”

The west wouldn’t have it. A Western Oregon delegate and future U.S. senator, Delazon Smith, responded: “If we are hemmed in between these ranges of mountains here, with every acre of available lands appropriated what avail it, sir? Nothing! We are left to struggle as best we may.”

Klippert’s idea is to combine the western halves of Washington and Oregon into one state and the eastern halves into another state.

His legislation would have established a bi-state task force to study the economic and governmental implications of redrawing boundaries to unite regions that are described in the bill as “remarkably conspicuous.”

Shea proposed appointing a task force to look at cutting Washington in two, leaving Oregon out of it.

His bill’s preamble was reminiscent of the settlers’ 1852 appeal to Congress:

Population growth played a defining role in Washington’s history even before statehood.

By the time Washington became the 42nd state in 1889, the transcontinental railroad had bypassed Walla Walla, shutting down its growth. By a vote of the people, Olympia was picked as the state capital over Yakima and Ellensburg.

So it was to Olympia that ranchers went in February to talk about cougars.

The bill eventually died in the Senate, lost in the crush of other legislation.

Kreps was quick to acknowledge that three Westside Democrats on the natural resources committee voted to recommend the Senate pass the bill. “My hat’s off to them. They actually understand the economics we were talking about,” he said.

Still, he made the drive over the Cascade Range for nothing.

His thoughts on splitting the state: “I’m all for it.”