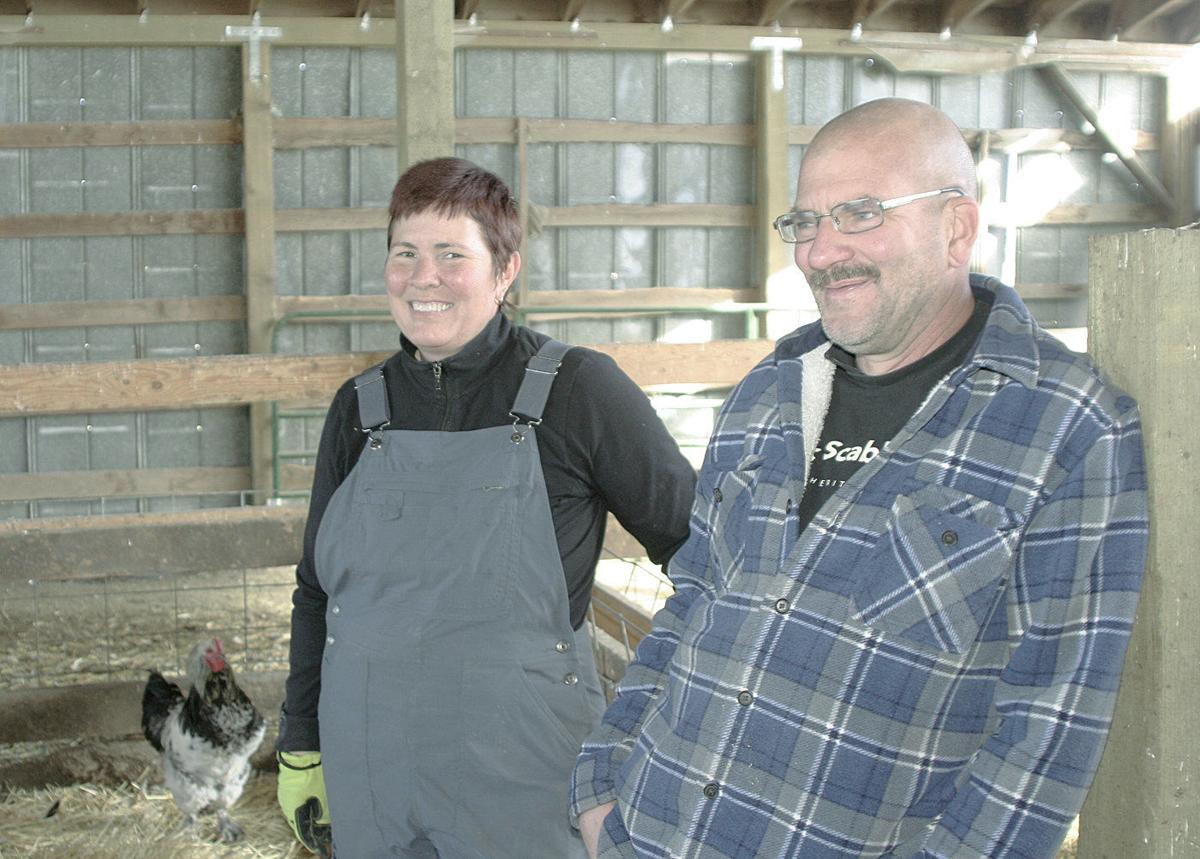 Jill and Paul Knittel in their barn Oct. 26 near Davenport, Wash. 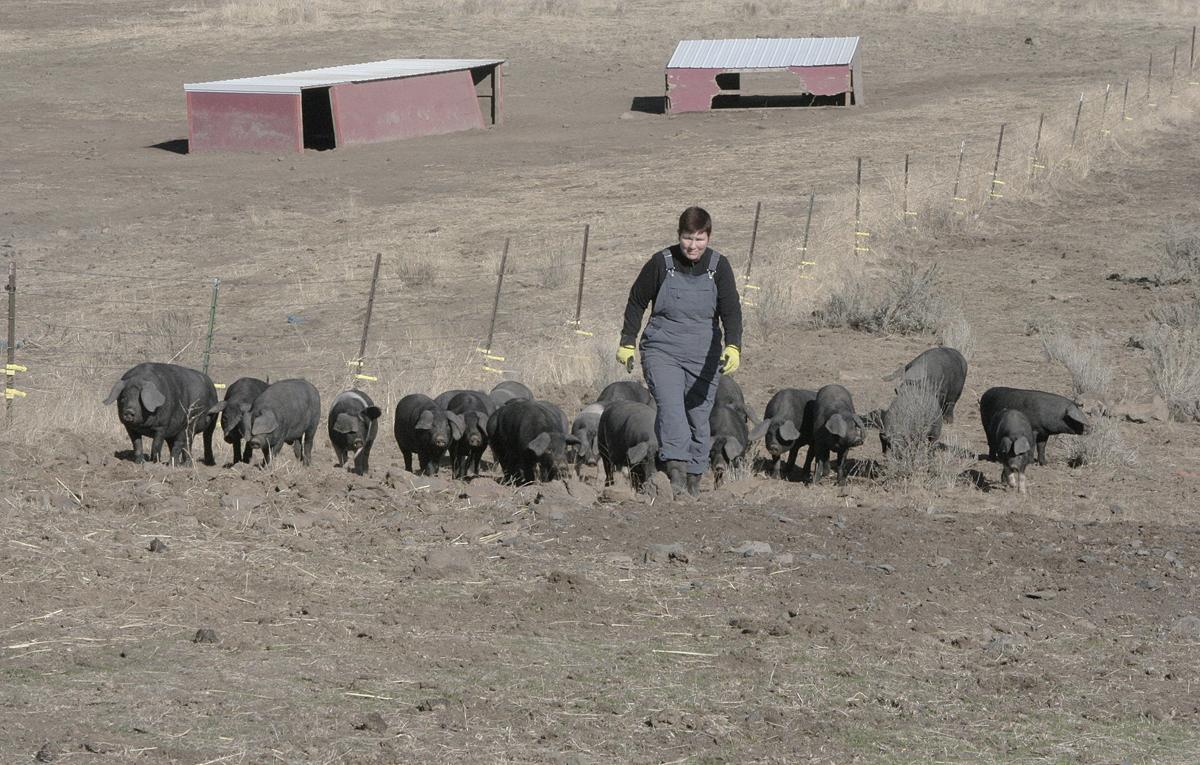 Jill Knittel leads a group of hogs on the farm she runs with her husband near Davenport, Wash. 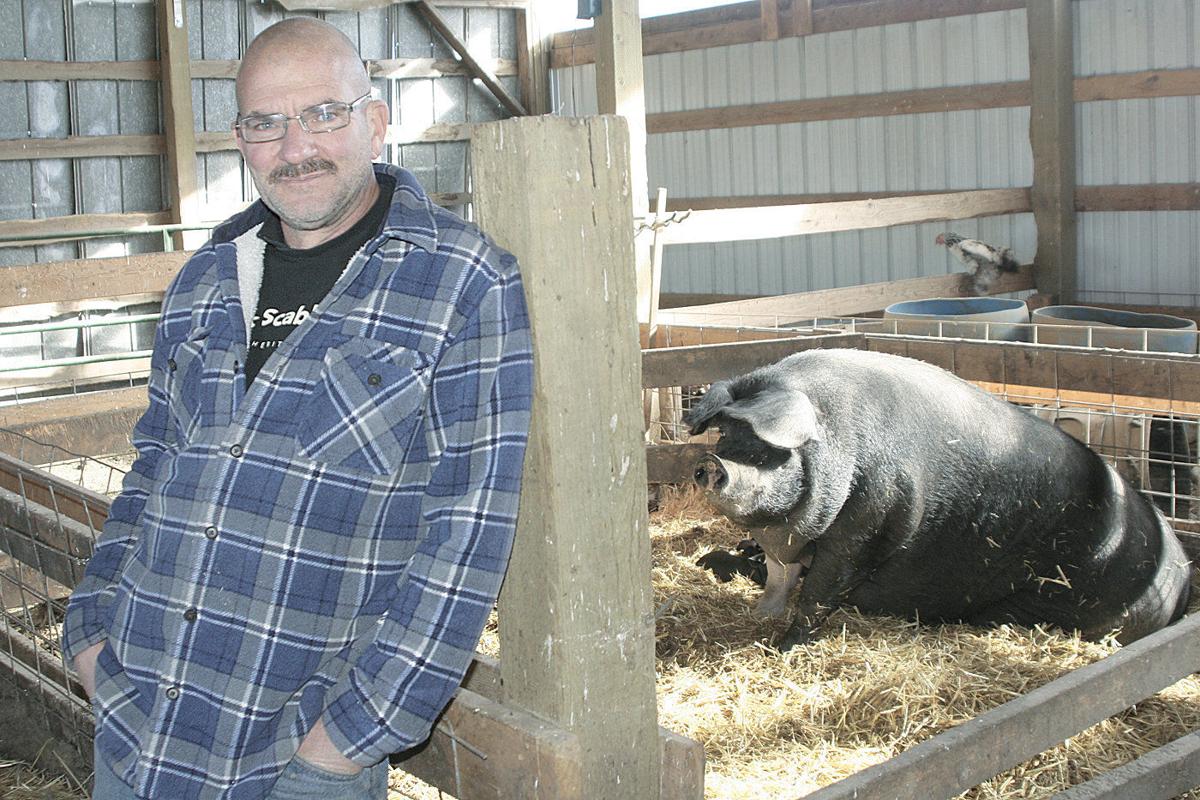 Paul Knittel on the farm he runs with his wife near Davenport, Wash.

Jill and Paul Knittel in their barn Oct. 26 near Davenport, Wash.

Jill Knittel leads a group of hogs on the farm she runs with her husband near Davenport, Wash.

Paul Knittel on the farm he runs with his wife near Davenport, Wash.

DAVENPORT, Wash. — Usually Jill and Paul Knittel’s hogs are swarming them by now.

Jill is calling to about 20 hogs farther out in a pen, a bucket of feed raised.

But it’s particularly windy on this fall morning, and the hogs don’t hear her.

Jill finally walks to the hogs and gets their attention, and they’re following close behind her as she walks back to the spot where she and her husband will feed them.

The Knittels raise Large Black Hogs, a heritage breed, on their farm near Davenport, Wash.

Paul retired from the Navy, serving from 1979 to 1996. Jill served from 1987 to 1992. Paul worked in the engine room as a machinist’s mate, while Jill navigated as a quartermaster.

They met while stationed at Pearl Harbor, when Jill’s car broke down and Paul was able to fix it. They married 40 days after they met, and are going on 28 years together. They have two children, Katarina, 18, and Jon, 16.

The couple has always been interested in farming, keeping a small horse farm in Chehalis for nine years before Paul’s job took them to Utah for a few years.

When they returned to Washington six years ago, they knew they wanted to farm, and came across the land that became the 550-acre Scabland Farm. They now raise 60 hogs, plus horses and goats.

They did not use any military programs to start the farm.

The taxes on the land had been deferred, but the Knittels were required to keep livestock on the property.

Jill had wanted a pig farm since she was 10 years old, growing up in West Seattle.

“And all of a sudden, here I was in my 40s going, ‘You know what? Let’s raise pigs,” she remembered with a laugh.

Paul grew up on a farm in Aumsville, Ore., and his father was a meatcutter.

Paul said he believes pigs require a bit more involvement than raising cattle. Throw cattle some hay and water, and that’s it, he said.

The irregular hours and the work ethic developed in the Navy helped train them for the farm.

“There are some days that are easy, you just do feeding and whatever and nothing goes wrong,” Jill said. “And when it gets crazy, working crazy long hours in the Navy was good. Because no matter how bad it gets here, we still go to bed at some point.”

Paul Knittel maintains a day job as a Grand Coulee Dam power plant operator. The couple hopes the farm will break even this year.

They sell hogs at a Wenatchee farmers’ market, through the LINC Foods Cooperative in Spokane, to individual customers and to restaurants in Seattle.

Jill hopes to get into several more restaurants, to the point where it makes up the majority of their sales.

The Knittels have a fan in Paul Shewchuk, executive chef at the Fairmont Olympic Hotel in Seattle. Shewchuk started using a hog a month over the summer, incorporating the entire animal into his menu, including prosciutto, salami, head cheeses, pork chops and the fat.

“Their fat content on their animals is insane — I’ve actually never worked with a pig that had so much fat on it,” Shewchuk said.

Chefs like fat because it provides flavor and richness, Shewchuk said.

Shewchuk hopes to see the farm become sustainable for the Knittels, and hopes to support them in building a foundation.

“I look forward to when they come and drop a pig off,” he said. “That conversation we have, that’s the most important part to me. The pig’s great, but it’s that interaction between chef and farmer. I hope they never lose that.”

Jill believes veterans are a natural fit to take over when farmers retire.

“In the morning or at night, after we’ve done all our chores and all the animals are peacefully eating, you get a good feeling from that and just a sense of accomplishment,” she said. “Even though you have to do the same thing 12 hours later, there’s something very satisfying. Much more than an office job.”