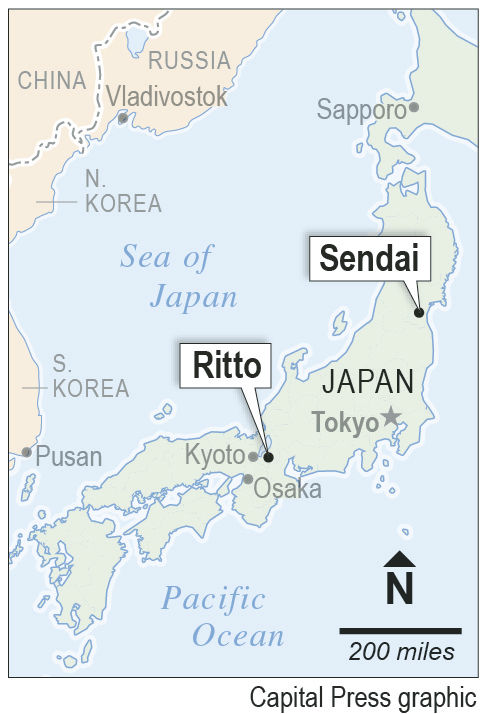 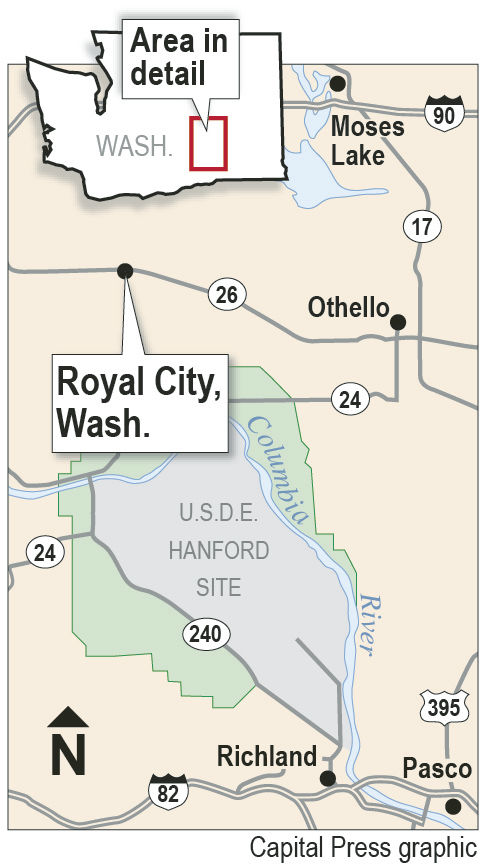 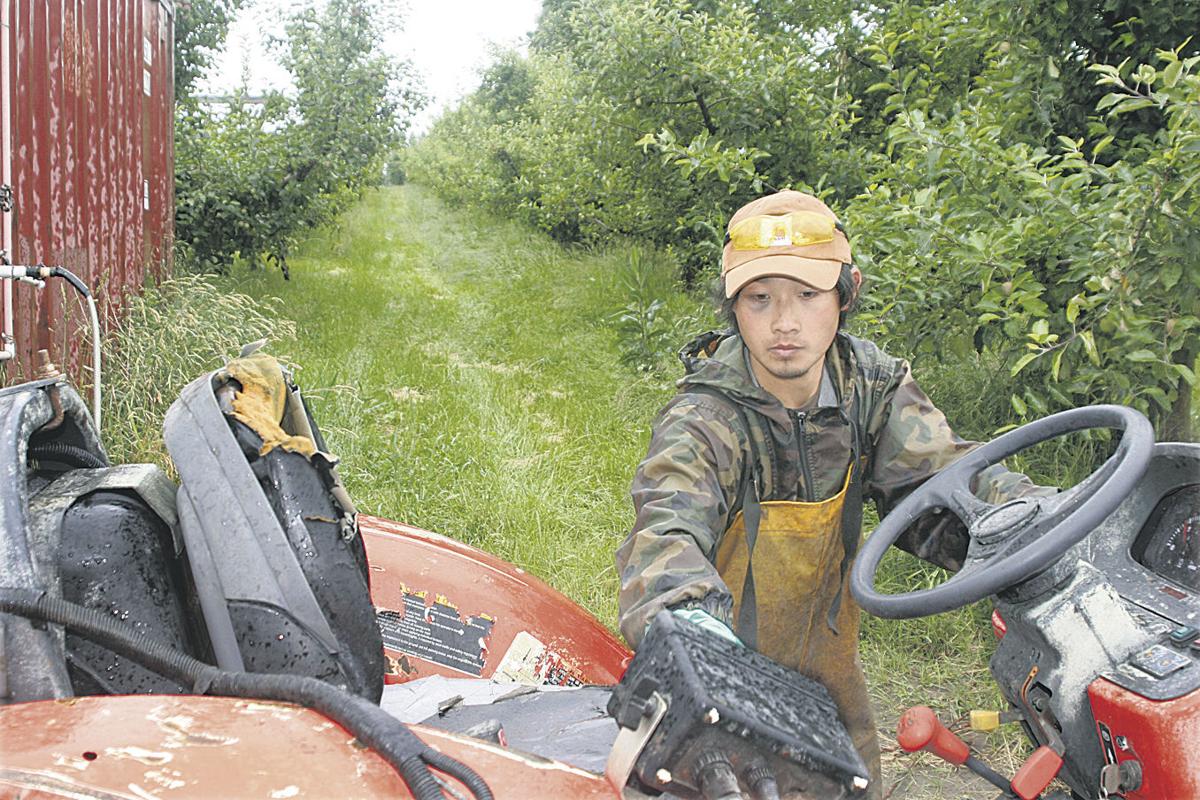 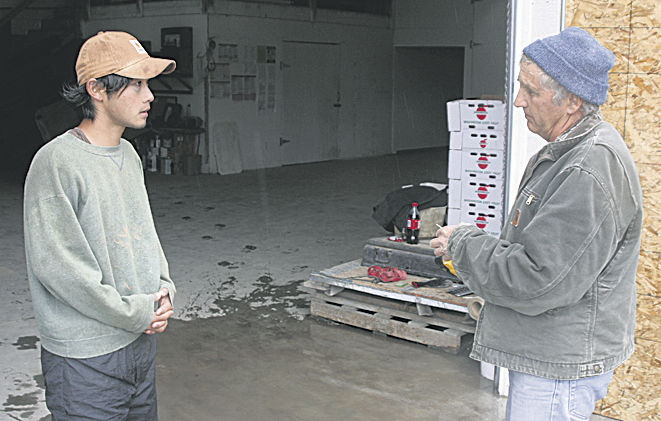 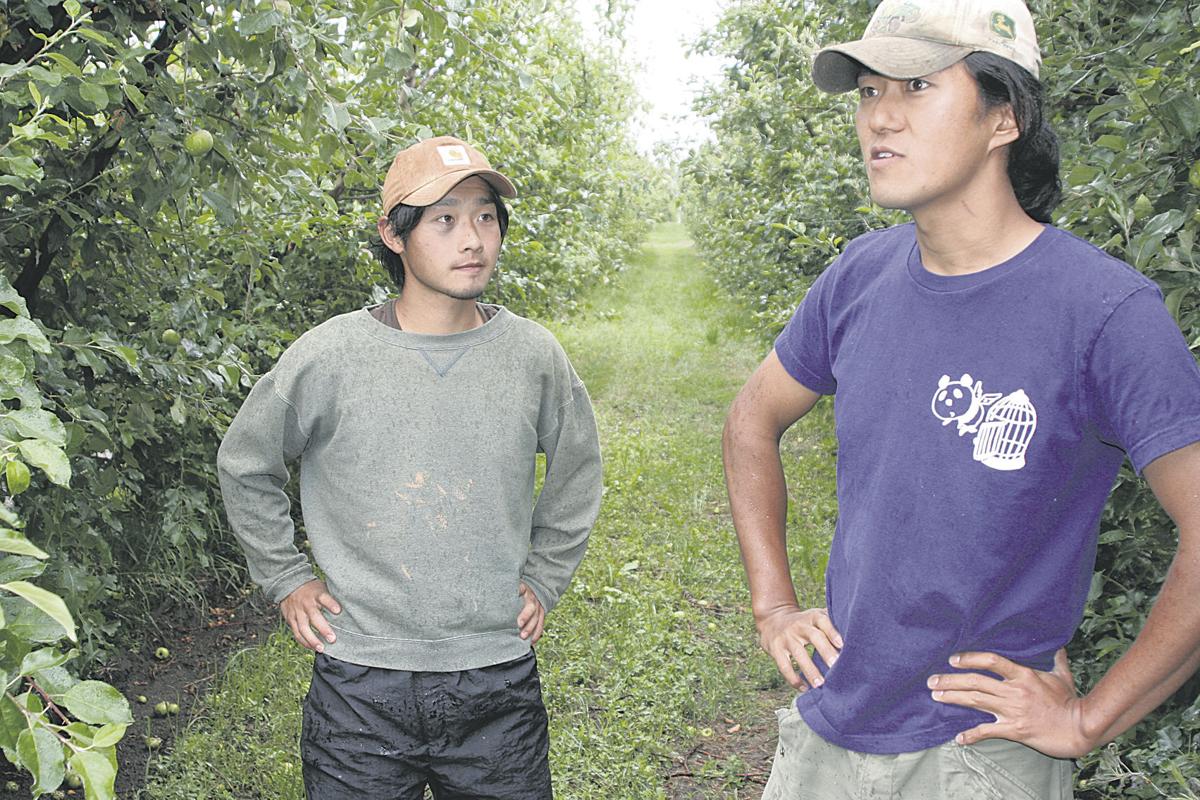 Matthew Weaver/Capital Press Japanese agricultural trainee Shota Yuki, left, looks to Mao Nakai in a row of fruit trees on the Tonnemaker Hill Farm in Royal City, Wash., the morning of June 26. The two trainees overlapped for a month on the farm. Nakai left later in the day for further English and agricultural education in management and marketing in Davis, Calif.

Matthew Weaver/Capital Press Japanese agricultural trainee Shota Yuki, left, looks to Mao Nakai in a row of fruit trees on the Tonnemaker Hill Farm in Royal City, Wash., the morning of June 26. The two trainees overlapped for a month on the farm. Nakai left later in the day for further English and agricultural education in management and marketing in Davis, Calif.

Generations of aspiring farmers get hands-on experience in American fields

It was a view unlike any he had ever seen in his homeland. Japan has many buildings but not much flat land, Nakai said.

"Japan is a very small country," he said, adding with a laugh, "So this view? No."

Though the view may be different, the knowledge Nakai has gained during the past year working on a U.S. farm will help him when he returns to his family's 1,000-year-old rice farm near the Japanese city of Ritto.

Growing up, he also met others when they returned to Japan after participating in the program.

"I saw the trainees before USA and after USA," he said. "Big change."

Japanese trainees, whose ages range from 19 to 30, arrive at Big Bend Community College in Moses Lake, Wash., each March for nine weeks of English and agriculture classes at the community college.

Then they are assigned to farms for 14 months of on-the-job training. Afterward, they go to the University of California-Davis for another nine weeks to continue their training in English and agriculture, this time focusing on marketing and management.

The U.S. farms range from sprawling cattle ranches to small vegetable farms. During the past several years, organic farms have been especially popular among the trainees, operations coordinator Asher Ramras said.

Nakai has spent 13 months working on the organic Tonnemaker Hill Farm in Royal City, Wash. He hopes to start growing fruits and vegetables such as peaches, tomatoes, squash and pumpkins when he returns to Japan.

For the past month, Nakai has shared quarters on the farm with Shota Yuki, who will replace him on the Tonnemaker farm. Yuki, 23, is from Sendai, an agricultural area in northern Japan that was hit by an earthquake last year. His father operates an apple, peach and cherry orchard, which he hopes to take over when he returns.

Tak Yoshinaga, a representative of the exchange council, said about 800 U.S. farms have hosted more than 5,000 Japanese trainees during the program's 46 years. An average of 30 to 40 U.S. farms participate each year, he said.

Trainees this year have been placed on 42 farms in locations stretching from Hawaii to Maine.

The program is one of roughly a dozen agricultural exchange programs in the United States, according to Christopher Barden, vice president of the Worldwide Farmers Exchange. In his program, which is based in Berkeley, Calif., 50 to 75 U.S. farmers host 200 to 300 young farmers from 46 countries each year.

Barden emphasized the experience is similar to an internship. Farmers need to be willing to train the young people, he said.

"We expect one of our hosts to treat the young person who comes as they would a relative," he said.

Host farmers provide housing and pay the trainees. In Barden's program, it can range from $1,100 to $3,500 a month depending on the living situation, whether meals are included and the trainee's experience. Some farmers prefer to put their trainee on the payroll while others provide a monthly stipend.

Ramras said farmers can choose between a fixed monthly rate of about $1,500 or hourly, typically at the state's minimum wage.

Yoshinaga sees growing interest among would-be Japanese trainees. The number has increased from 30 several years ago to 64 this year, producing a call for more host farms.

Yoshinaga believes more young Japanese are turning to agriculture because of the weak economy and a lack of jobs.

About 60 percent of trainees have a background in farming when they start, Yoshinaga estimated, and a similar percentage elect to remain in agriculture upon returning to Japan.

"The value of the program that comes across the strongest is building connections and partners with farmers," Ramras said.

"It's good to know both sides," Yoshinaga said.

Part of the family

Leda Langley of Vashon Island, Wash., has participated in the Japanese program for five years on her 7-acre organic farm, where she raises nursery plants and row crops.

"We really like that most of them have already completed a four-year agricultural degree or are in the middle of completing that degree," she said. "We also learn things from them. The Japanese have a much higher idea of quality control."

Kole Tonnemaker, a partner in Tonnemaker Hill Farm with his brother Kurt, has participated in the trainee program for 10 years.

He says he's had to discuss the difference in food value with just about every trainee.

In the United States, he said, food is cheap and succeeding as a farmer requires a balance between production and quality, while Japanese consumers are more oriented toward quality and not as concerned about price.

"Anybody that wants to get involved with the program needs to realize they're going to come at it from a different perspective," he said.

Bruce Talbott typically hosts two Japanese students in addition to interns from other parts of the world on his 400-acre peach, winegrape and pear operation in Palisade, Colo. He's participated in the Japanese program six years.

"There's a fraternity of fruit growers," he said. "When people really care about fruit and produce, I really like to work with them."

"We really want people to be part of the family," Langley said, noting trainees will often return to visit after their official stay.

Before arriving in the U.S., Nakai thought he might be able to rely on body language to understand his hosts. Now, though, he thinks differently.

"Language is very important," he said. "We are the same animal, but sometimes misunderstand, confused."

"Most of these young people have conversational English," he said, noting it takes time to get used to some of the technical terms.

Trainees in Barden's program need to have enough English to be safe, he said. "They have to be able to understand, 'No, don't mix those two chemicals together,' or 'That is a power takeoff on a tractor, do not get near that.'"

Farmers must be willing to take the time to communicate, he said.

"They are here to learn," he said. "Communication is paramount."

Langley recommends having charts and lists printed out so everyone has one to look at for the day's chores.

Talbott uses some interpreters, but said communication can come down to sign language.

"You have to have some patience and flexibility," he said.

Nakai said he would advise future trainees to be honest with their hosts and maintain a smile.

Japanese trainees are often quiet, he said, and suggested making time to speak with them. For most, the program is the first time they will ever meet an American or regularly speak English, he said. The training helps to expand both their knowledge and their world view.

"For that, this program is very good," he said.

Nakai said Tonnemaker was a good boss, an example Nakai hopes to emulate in Japan.

"I learned a great deal in a very short time," he said.

"This farm, we can do anything," he said.

Here are some of the programs providing opportunities for U.S. farmers to host agricultural students from abroad: