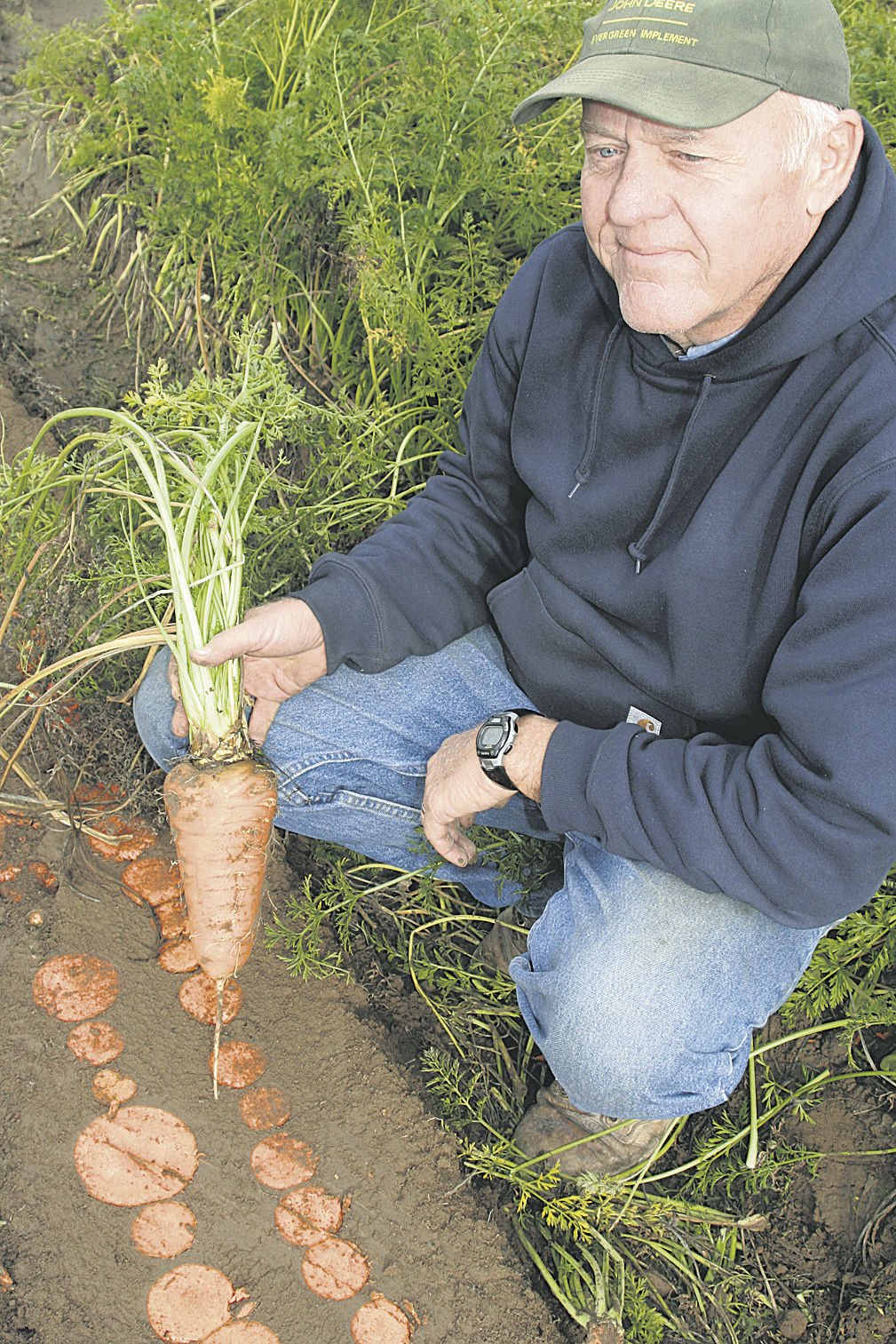 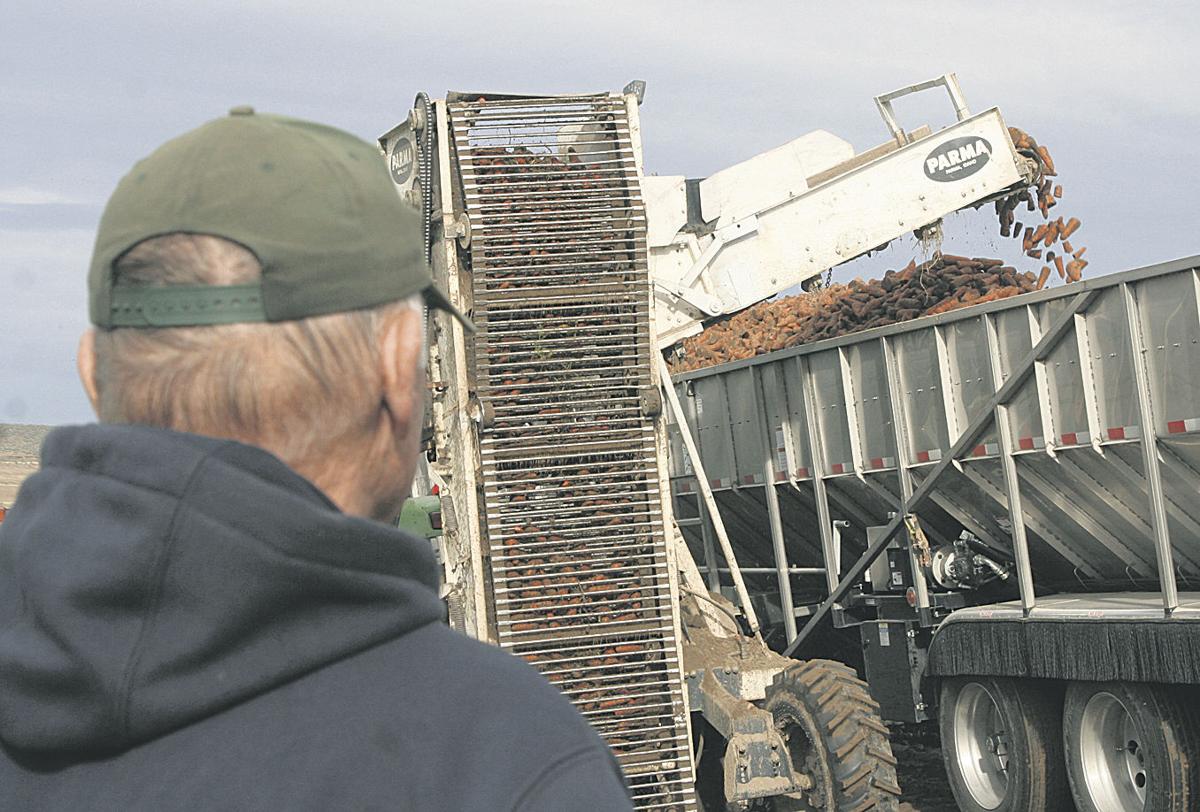 Dan Wheat/Capital Press Paul Bergeson watches carrots dumping into a truck from the digger. He's harvesting about 800 acres and 25,000 tons of processing carrots this year, up from 500 acres and 16,000 tons. Washington tops the nation with 3,400 acres and 130,700 tons. 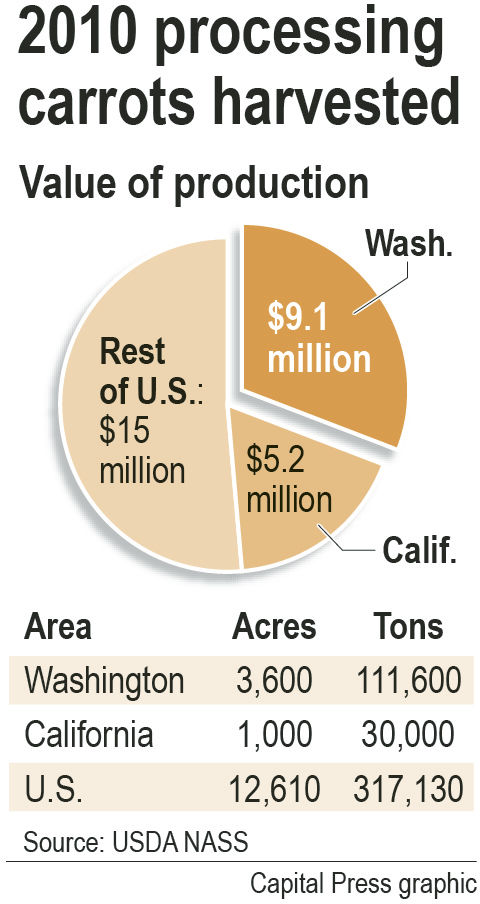 Dan Wheat/Capital Press Paul Bergeson watches carrots dumping into a truck from the digger. He's harvesting about 800 acres and 25,000 tons of processing carrots this year, up from 500 acres and 16,000 tons. Washington tops the nation with 3,400 acres and 130,700 tons.

ROYAL CITY, Wash. -- Orange chunks stick out of the freshly turned dirt where the machines have been.

It's sunny and at 65 degrees is unseasonably warm for Nov. 5. A sweet carrot aroma fills the air. Above the field, some 120 miles to the west, the snowy hump of Mount Rainier graces the horizon.

For Paul Bergeson this is a really good day in his month-plus-long harvest of processing carrots. He's seen plenty of cool, rainy days and been shut down when fields get too muddy or frozen.

Bergeson, 59, farms with his sons, Chad, 35, and Ian, 29, between Royal City and Othello. Onions, apples and carrots are their main crops.

But these aren't carrots you see in the fresh produce section of your store. They are the Red Core Chantenay variety that grow up to 6 to 8 inches in diameter and processors prefer for slicing and dicing for things like soups, TV dinners, bags of frozen vegetables and crinkle cut for restaurants.

"Anything smaller than an inch-and-a-half isn't payable for us," Bergeson said. "People look at these and think they would be woody. They are surprised that they taste good."

Washington is the top processing carrot state in the nation at 3,400 acres and 130,700 tons valued at $10.3 million in 2011, according to the National Agricultural Statistics Service. Grant, Benton, Franklin and Klickitat counties are the main growing areas.

Wisconsin is second, California is third and Minnesota fourth among producing states.

Bergeson got into processing carrots in 1980 as a replacement for sugar beets.

The season starts with planting in late March or early April. The right amount of water is critical during growing season and so is keeping blight and nematodes under control.

The shredder cuts the green fern tops, shreds them and casts them to the side.

The crowner has a roller that pushes down taller carrots, evening tops before a large spinning drum of disc blades slices off the greenish tops. It leaves a flat bed as smooth as a pool table and dotted with orange carrot tops that look like saucers.

Crowning in the field saves that step in the processing plant.

The third machine is the digger. Discs spin at an angle as they're pushed into the ground straddling carrots, lifting them and the dirt around them. Carrots are sifted out in a conveyor system that ends with carrots shooting into trucks running along side the digger.

Bergeson harvests about 600 tons a day. He hopes to average more than 30 tons per acre this year and finish at about 25,000 tons.

He makes about $70 to $80 a ton and, as with any crop, watches his costs to maintain profits. Sales are contracted in advance with processors. He sells to Quincy Foods, Twin City Foods in Ellensburg and Smith Frozen Foods in Weston, Ore.

Bergeson hopes to be done with harvest by Thanksgiving.

He has a lot to dig. He planted more than 800 acres, up from his normal 500, because other growers dropped out when they couldn't find enough fields to rent.

Harvest usually starts about Oct. 10 and finishes in mid-November. Twice he's gone into December. His latest was Dec. 3, 2008. The crop was late due to a cool spring and yield was up so harvest took longer and the ground wasn't frozen yet.