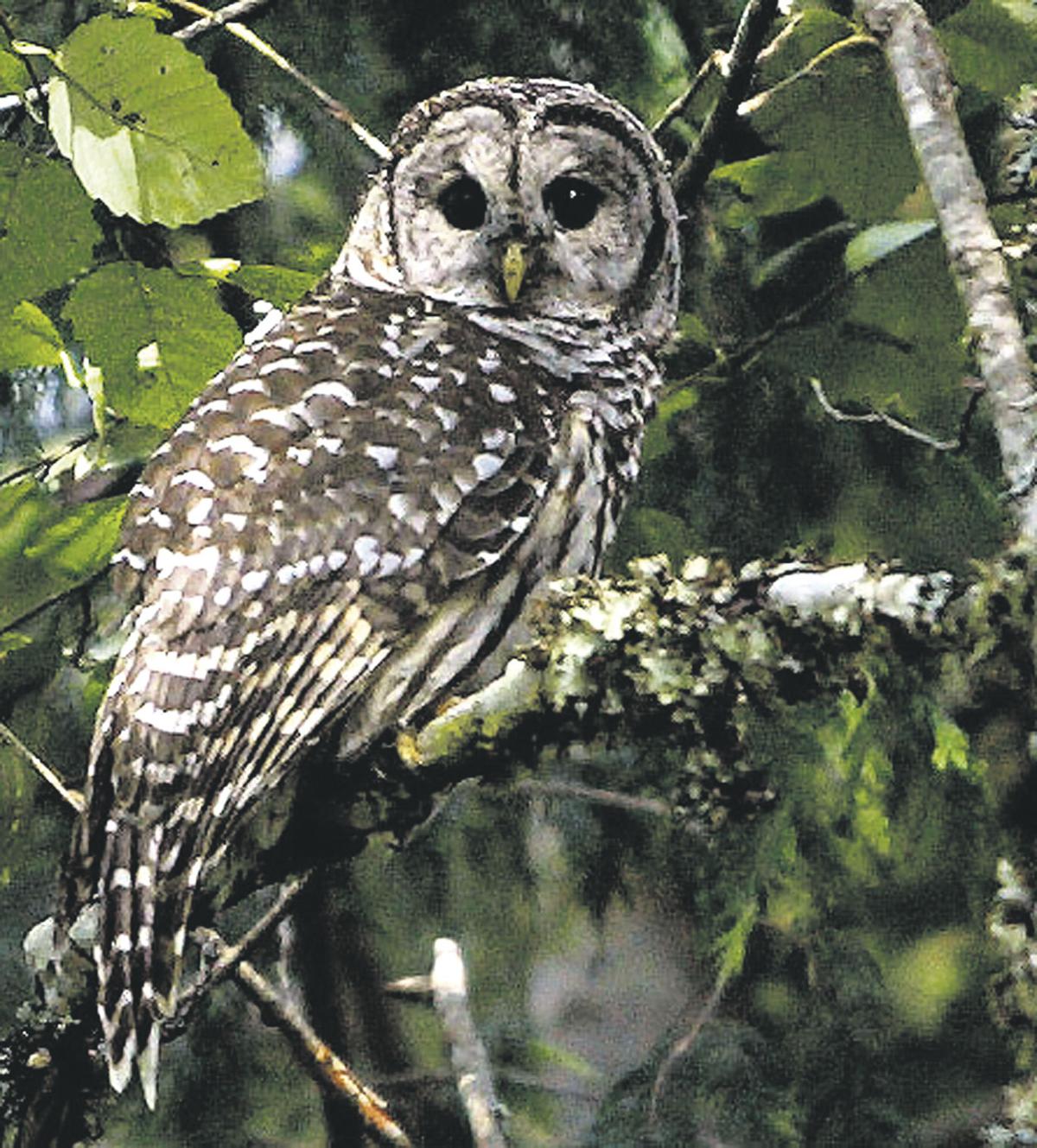 Barred owl ** FILE ** A barred owl is shown in a wilderness area Sept. 23, 2004 near Index, Wash. With the decline of northern spotted owls at a crisis point, a group of scientists is urging the government to consider experiments that include killing some of these barred owls that have invaded spotted owl territory from British Columbia to California. (AP Photo/The Herald, Barton Glasser, File) 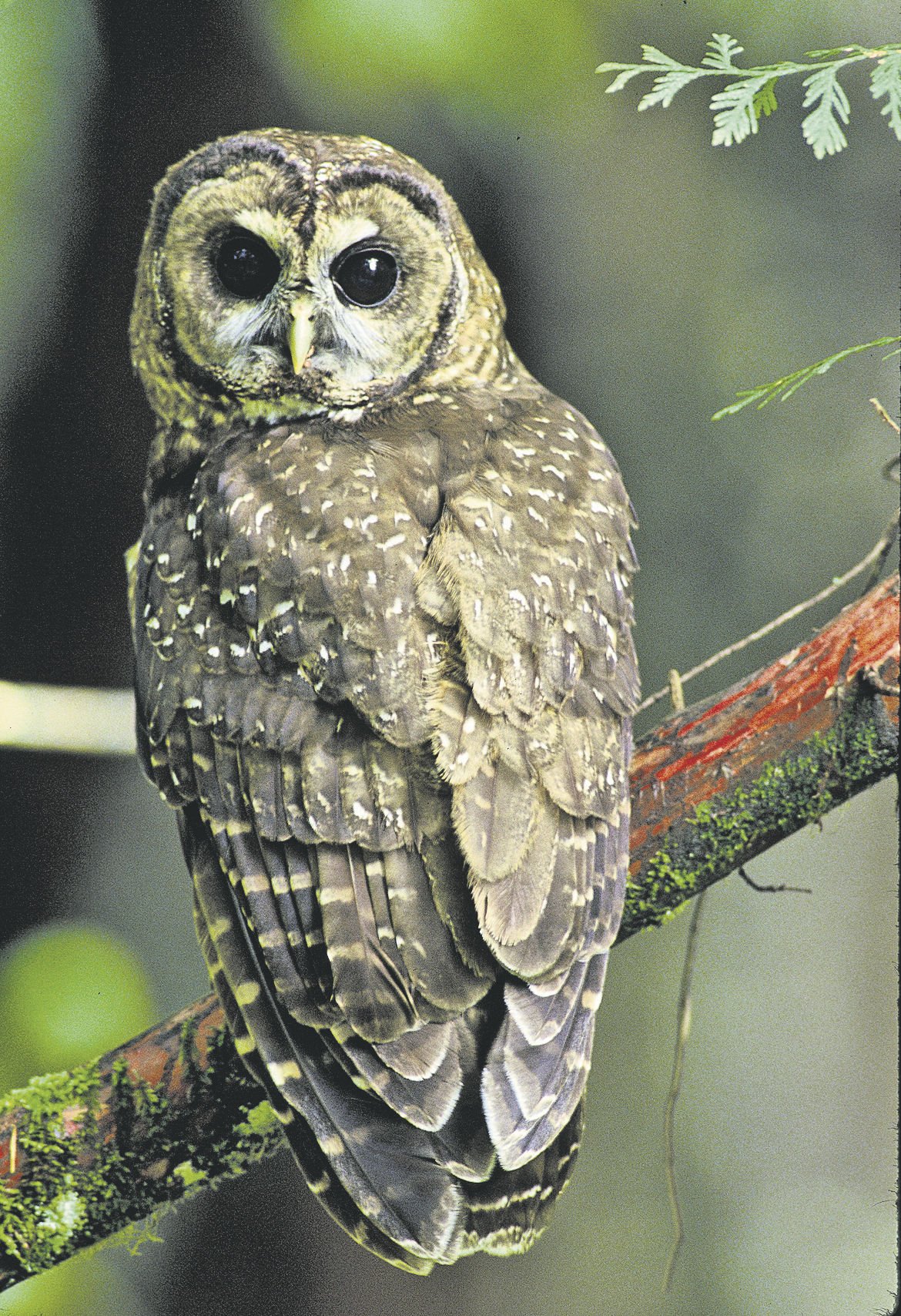 Barred owl ** FILE ** A barred owl is shown in a wilderness area Sept. 23, 2004 near Index, Wash. With the decline of northern spotted owls at a crisis point, a group of scientists is urging the government to consider experiments that include killing some of these barred owls that have invaded spotted owl territory from British Columbia to California. (AP Photo/The Herald, Barton Glasser, File)

Federal firepower may be needed to defend the northern spotted owl against a larger, more aggressive adversary.

The U.S. Fish and Wildlife wants to study the possibility of shooting or trapping barred owls, a hardier species of bird that's muscling in on the threatened owl's habitat.

"It could keep it from ever being able to recover," said Phil Carroll, a spokesman for the agency.

When Endangered Species Act protection was extended to the spotted owl in 1990, human-caused habitat loss was seen as the main danger to the bird's survival. Barred owls were regarded as a "considerable concern."

They've since continued to crowd out the threatened species and are now viewed as a "significant threat," according to the Fish and Wildlife Service.

Not only do barred owls take over habitat and food sources, but they scare spotted owls enough to stop them from calling out to each other.

That makes it harder for federal biologists to detect spotted owls, potentially preventing the government from identifying and protecting important habitat.

If spotted owls have difficulties finding each other in the woods, that may affect mating and reproduction as well.

Due to its tolerance for a range of habitats and food sources, the barred owl can expand its population more easily than the spotted owl, a pickier eater with very specific habitat needs.

At the same time, barred owls' size and temperament intimidate spotted owls, which aren't able to fend off the intruders, Carroll said.

"Spotted owls are very benign, while barred owls are not," he said. "They've been seen attacking spotted owls."

It's possible that humans contributed to the barred owl's spread to the West from its traditional habitat in the eastern parts of North America.

Wildfire suppression may have reduced the size of non-forested gaps in the central part of the continent, allowing the birds to cross prairies that previously halted their westward movement.

"It's still being discussed if it's an invasive species that came here as the result of human activity, or just a natural migration," Carroll said.

As part of the proposed experiment, scientists with the Fish and Wildlife Service have recommended that barred owls be removed from three sites in the Oregon's Coast Range and Klamath Mountains and Washington's Wenatchee National Forest.

The exact sites and methods of removal haven't been determined, Carroll said. "These are all things we're going to look at in the environmental impact statement."

The agency will conduct a full environmental study of the removal experiment and has reached out to avian and environmental groups that are likely to have opinions on the matter, he said.

If the experiment confirms that barred owl removal is needed to protect spotted owls, the agency may conduct further studies to see if removal should become a long-term management strategy, Carroll said.

The Fish and Wildlife Service uses a similar approach to help the threatened snowy plover along the West coast, killing avian predators like ravens and jays along beaches, he said.

Don McIvor, science coordinator for Audubon Washington, a state affiliate of the National Audubon Society, said difficult choices sometimes need to be made when managing for endangered species habitat.

"We're between a rock and a hard place," he said.

Although some avian groups may come out against the removal experiment, McIvor said, saving an entire population justifies the sacrifice of individual birds.

The Fish and Wildlife Service's plan to first study the effectiveness of removal is a wise step, he said. "I think it's a logical way to proceed."