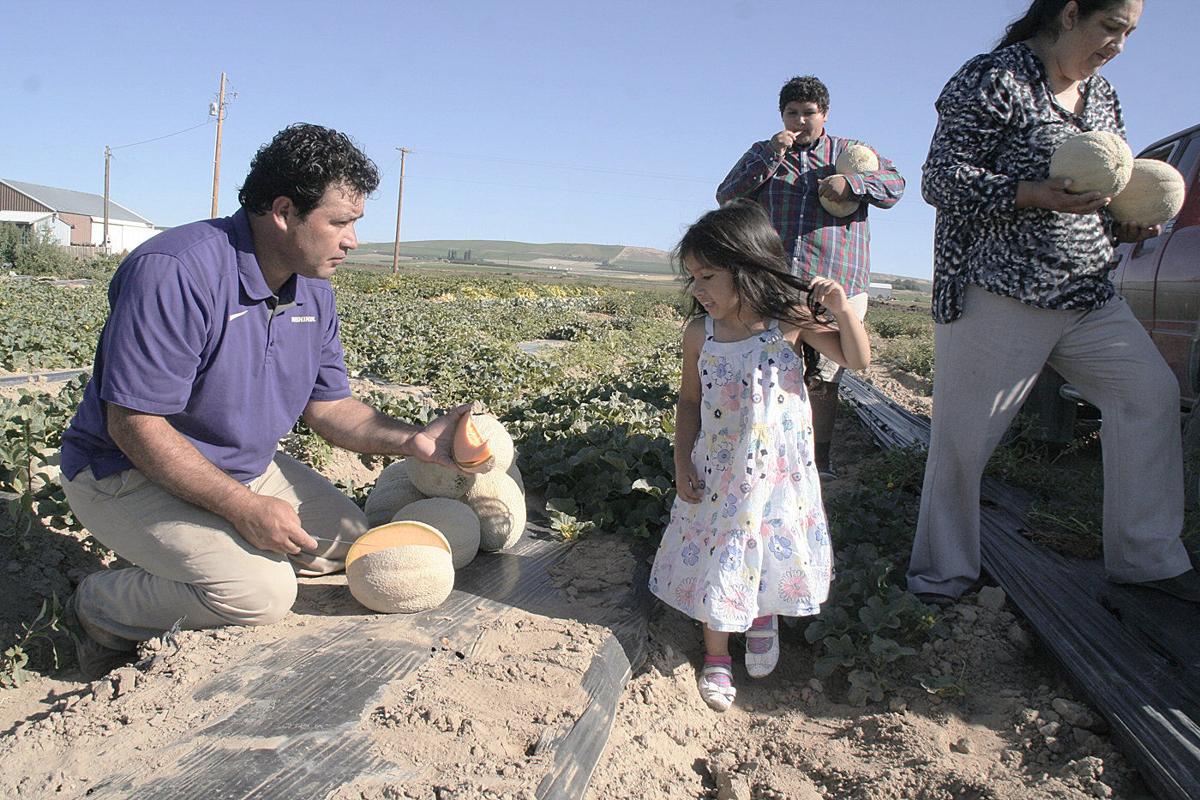 Dan Wheat/Capital Press Santos Guadarrama offers a slice of cantaloupe to his daughter, Emily, 4, as his wife, Zenaida, and son, Benjamin, carry melons to the truck at their farm near Royal City, Wash., July 25. They supply farmers' markets in Wenatchee and Moses Lake. 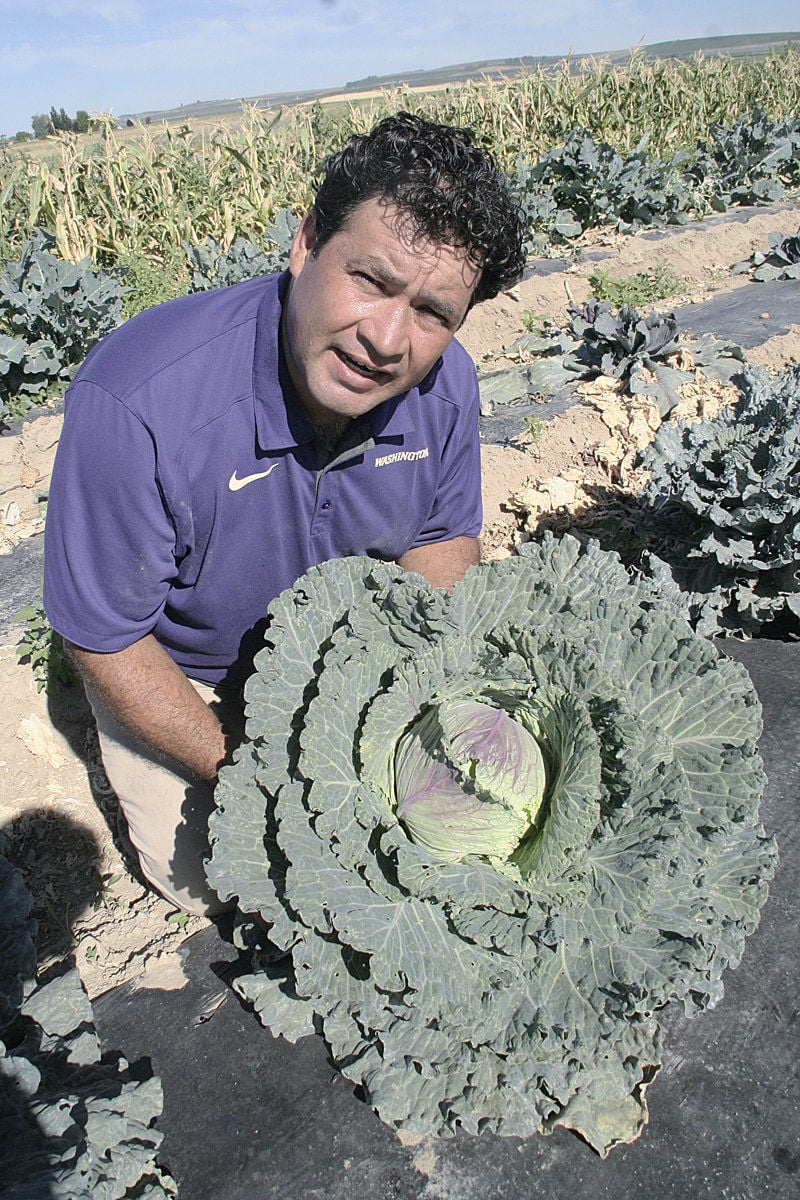 Dan Wheat/Capital PressSantos Guadarrama with a cabbage that does well in heat. He grows many different vegetables.

Dan Wheat/Capital Press Santos Guadarrama offers a slice of cantaloupe to his daughter, Emily, 4, as his wife, Zenaida, and son, Benjamin, carry melons to the truck at their farm near Royal City, Wash., July 25. They supply farmers' markets in Wenatchee and Moses Lake.

Dan Wheat/Capital PressSantos Guadarrama with a cabbage that does well in heat. He grows many different vegetables.

The day would peak at 99 degrees and it was already in the mid-80s at 9 a.m. as his family helped him load the melons into a bin in the back of his pickup.

“I usually try to get things done before it gets hot but it’s not going to happen today (July 25),” said Guadarrama, 46, as he drove the pickup into the field.

Guadarrama began working at Ike and Alice Parker’s farm a few miles north of Royal City in 1990. In 1997, he inherited their produce business, bought a small portion of their land and continued growing vegetables. He grows on about 8 acres.

It’s been a family affair. His wife, their seven children and at times his brothers and their families have helped.

“We thought of using our name but it’s hard for people to say it and write it. Folks called us the people from Royal, so we decided to call our business Royal Produce,” he said.

The season starts in February when they germinate seeds in a greenhouse. Later, he moves the young plants into the field, covering the more vulnerable ones with Agribon, a light, porous fabric to protect them from frost, wind, hail and rain.

This year, they began using composted, pelletized manure, yard compost and organic liquid fertilizer as they transition to organic production.

Guadarrama once also worked construction but for some time has focused solely on the farm.

“It’s not lucrative in any way, but it pays the bills. It fits our family. There’s freedom, which is the thing I value the most,” he said.

He’s his own boss and can chart his own course.

The Guadarramas grew up in Villa Guerrero, a small village south of Mexico City. His father grew and sold vegetables.

“When I was a little kid, I helped him and I hated it,” Guadarrama said.

He learned about flowers because the people in Villa Guerrero who made more money, including Zenaida’s parents, raised and sold flowers.

Guadarrama managed a couple of greenhouses of roses for a company but decided it wouldn’t be enough to support a family.

He and Zenaida crossed the U.S.-Mexican border illegally in 1989. He worked in construction in California and then at an orchard near Royal City before hiring on at the Parkers’.

Their children were all born in the U.S. and therefore are U.S. citizens. The Guadarramas were able to pay a fine and become legal, permanent residents when their oldest child, who now works in nursing in Portland, reached 21 years of age, five years ago.

They are working toward U.S. citizenship.

Guadarrama says today he might not cross the border illegally but that back then conditions were different and he was seeking the best for his family.

It’s human nature to seek the best for one’s family, he said. Besides the fine, they paid another price, not being able to visit their parents in Mexico for 22 years.