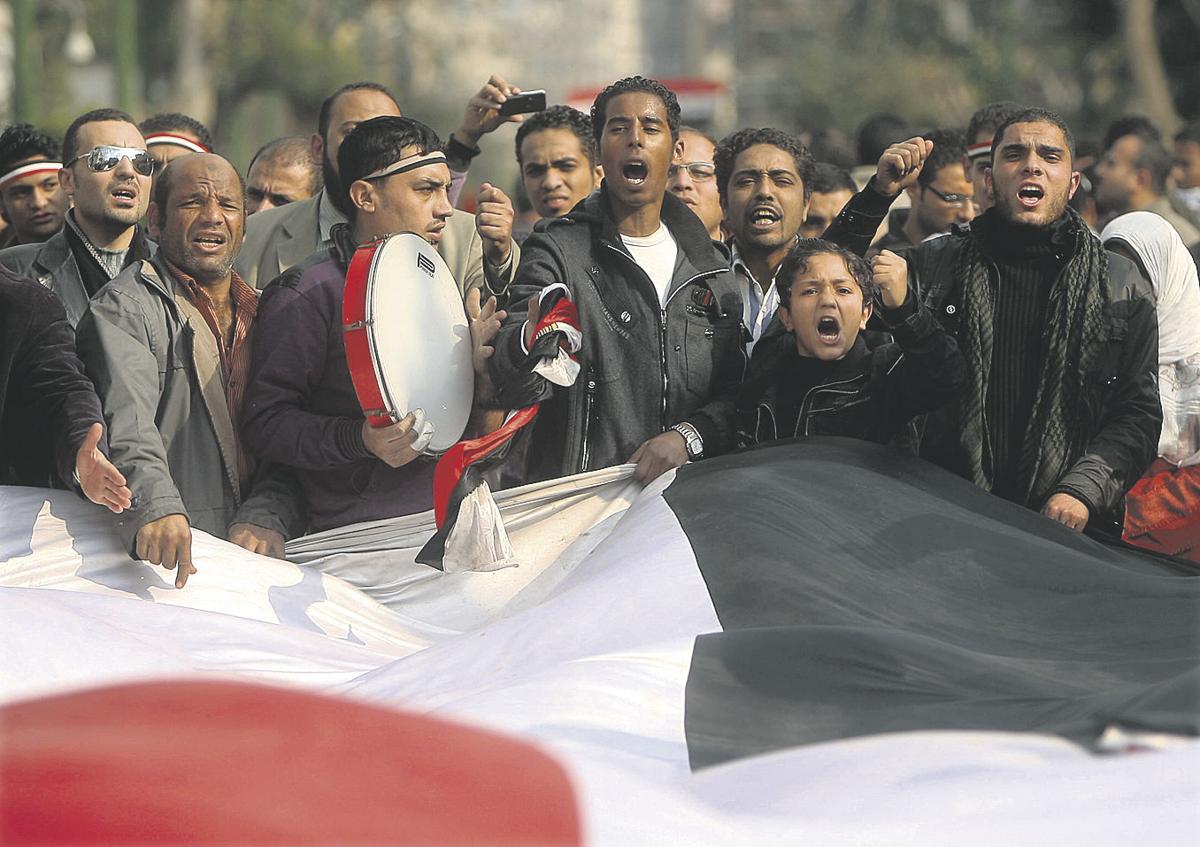 Ahmed Ali/Associated Press Egyptian protesters wave a banner in front of the Egyptian Parliament in Cairo, Egypt, on Feb. 9. Around 2,000 protesters waved flags outside the parliament, located several blocks from Tahrir Square. 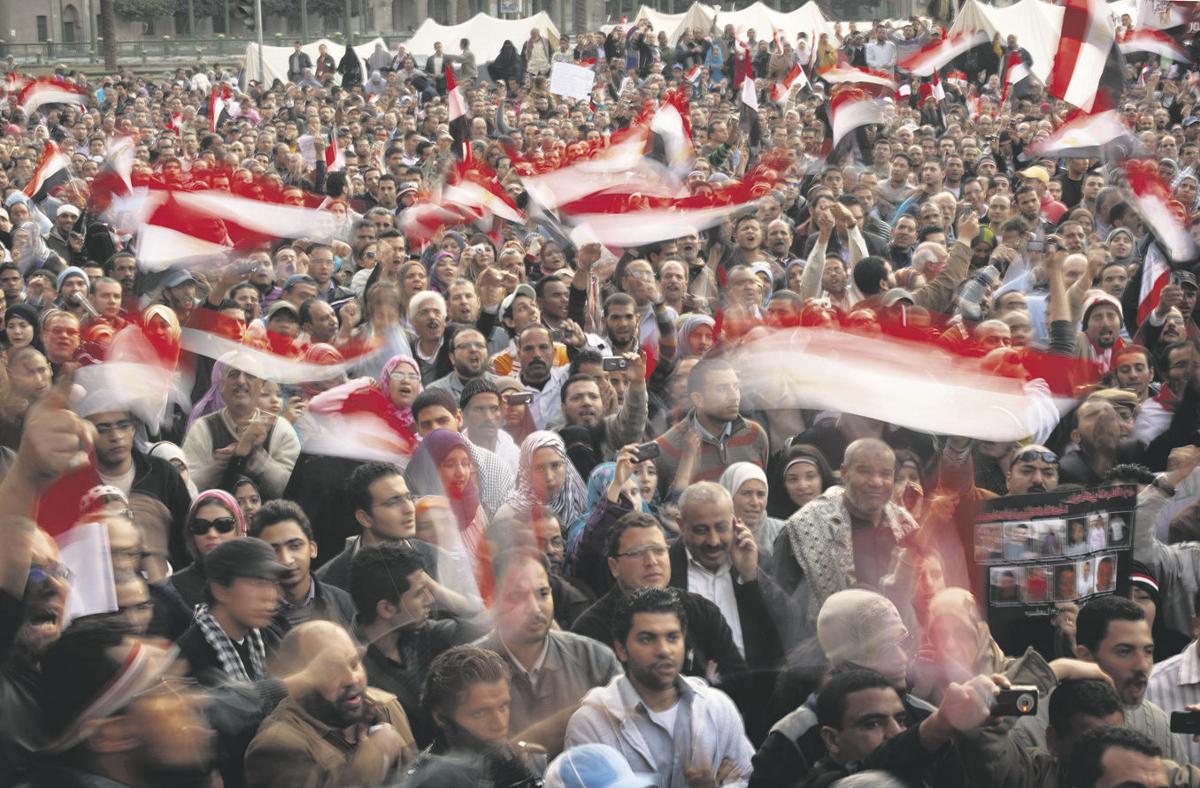 Emilio Morenatti/Associated Press Anti-government protestors hold Egyptian flags during a demonstration at Tahrir Square in Cairo, Egypt, on Feb. 9. Protesters appear to have settled in for a long standoff, turning Tahrir Square into a makeshift village with tens of thousands coming every day, with some sleeping in tents made of blankets and plastic sheeting. 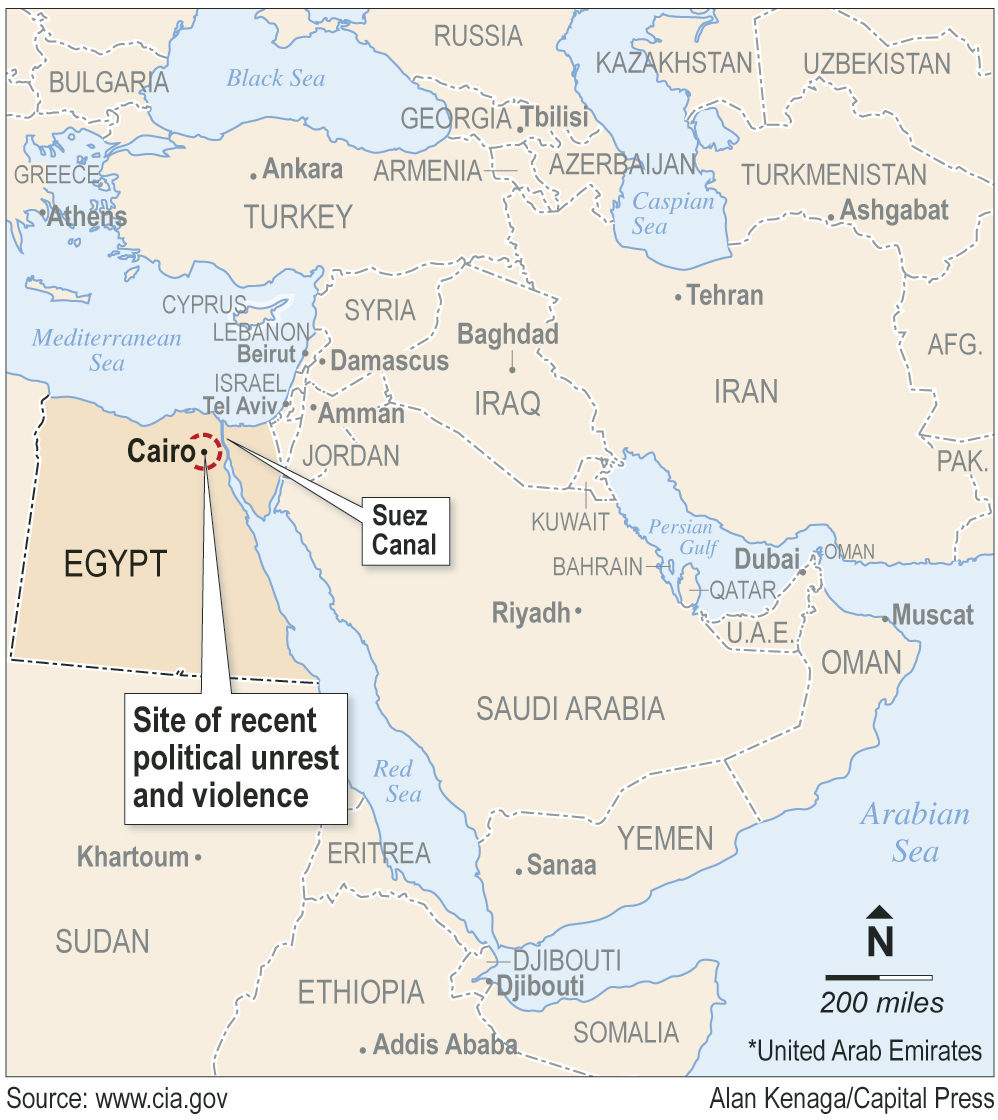 Ahmed Ali/Associated Press Egyptian protesters wave a banner in front of the Egyptian Parliament in Cairo, Egypt, on Feb. 9. Around 2,000 protesters waved flags outside the parliament, located several blocks from Tahrir Square.

Emilio Morenatti/Associated Press Anti-government protestors hold Egyptian flags during a demonstration at Tahrir Square in Cairo, Egypt, on Feb. 9. Protesters appear to have settled in for a long standoff, turning Tahrir Square into a makeshift village with tens of thousands coming every day, with some sleeping in tents made of blankets and plastic sheeting.

"There's no doubt Egypt is a very important market," said Steve Mercer, director of communications for U.S. Wheat Associates. Egypt imports 10 million metric tons of wheat annually, making it the single largest importer of wheat in the world. The African nation imported an average of 1.8 million metric tons of U.S. wheat in the last five years, putting it among the top 10 importers of U.S. soft white wheat in some years.

The Northwest has been a large supplier of that wheat, according to the Washington Grain Commission. Japan, the Philippines and South Korea are the top three importers of U.S. white wheat.

The amount of wheat Egypt imports from the U.S. depends on the price and supplies from other wheat-producing countries, Mercer said.

Russia supplied 50 percent of Egypt's wheat until last year's disastrous harvest forced that nation to stop all exports. That export ban, combined with poor-quality crops in Australia, Canada and Ukraine, have sent wheat prices skyward. Pacific Northwest bids for February delivery of soft white wheat were $8.53, up from $4.80 a year ago, according to USDA Market News.

"We don't know what's going to happen" in Egypt, grain commission CEO Tom Mick told the Capital Press. "Nobody does, so we're sitting back, waiting to see what's going to transpire."

Commission chairman Nat Webb said in a press release that an Egyptian government unfriendly to the U.S. could have a direct impact on wheat sales. In addition to Egypt being a large wheat customer, much of the region's shipping commerce passes through Egypt's Suez Canal.

Protesters have called for the resignation of Egyptian President Hosni Mubarak, a long-time U.S. ally. He has offered to step down after fall elections, but no interim plan has emerged. Behind-the-scenes talks between the government and dissidents continued as of Capital Press deadline.

Egypt, with 80 million people, spends $3 billion a year on food subsidies -- about 65 percent of what it made from operating the Suez Canal in 2009.

In a country where the typical Egyptian lives on less than $2 a day, bread -- which they call "aish" and is a synonym for "life" -- is subsidized and sells for about a penny a round loaf. As wheat prices rose, the government has had to increase food subsidies by about $700 million.

A proposal for reduced subsidies and higher bread prices last summer set off protests in Cairo.

The possibility of unrest spreading to other Middle Eastern nations also concerns the U.S. wheat industry.

The Middle East imports 34 percent of its domestic wheat needs and represents 15 percent of the world's total wheat imports.

More than 850,000 metric tons of soft white wheat from Washington, Oregon and Idaho has been exported to Egypt and Yemen so far this year, according to the commission.

"There just are so many unknowns," Mercer said. "We're looking ahead to a more stabilized situation that will continue to be an effective and efficient wheat importer."

In a sign that things may return to normal in Egypt for the wheat industry, the Egyptian government buyer purchased "a significant amount" of soft white wheat the week of Jan. 31, Mercer said.

Egyptian government and private buyers could also turn elsewhere for their wheat, but Mercer said the U.S. is likely to remain the top seller into the summer as world supplies of quality milling wheat remain tight.

"There's no reason Egypt wouldn't consider to buy from us," he said.

The region is large and growing, Mercer said, noting Saudi Arabia is likely to be in the market for 2 million metric tons of wheat in the future.

U.S. Wheat has maintained contact with its eight employees in the Cairo office.

"Their safety was our first priority and everybody is fine," he said. Office workers are working from home to maintain contacts. "It's an impressive thing, those folks living through that, making sure the work goes on as much as possible."

Regional vice president Dick Prior has elected to stay in Egypt after 30 years, although he was out of the country this week to work on an annual unified export planning session for the organization.

"We're absolutely committed to the region and continuing to promote U.S. wheat to those countries," Mercer said.

The Associated Press contributed to this story.