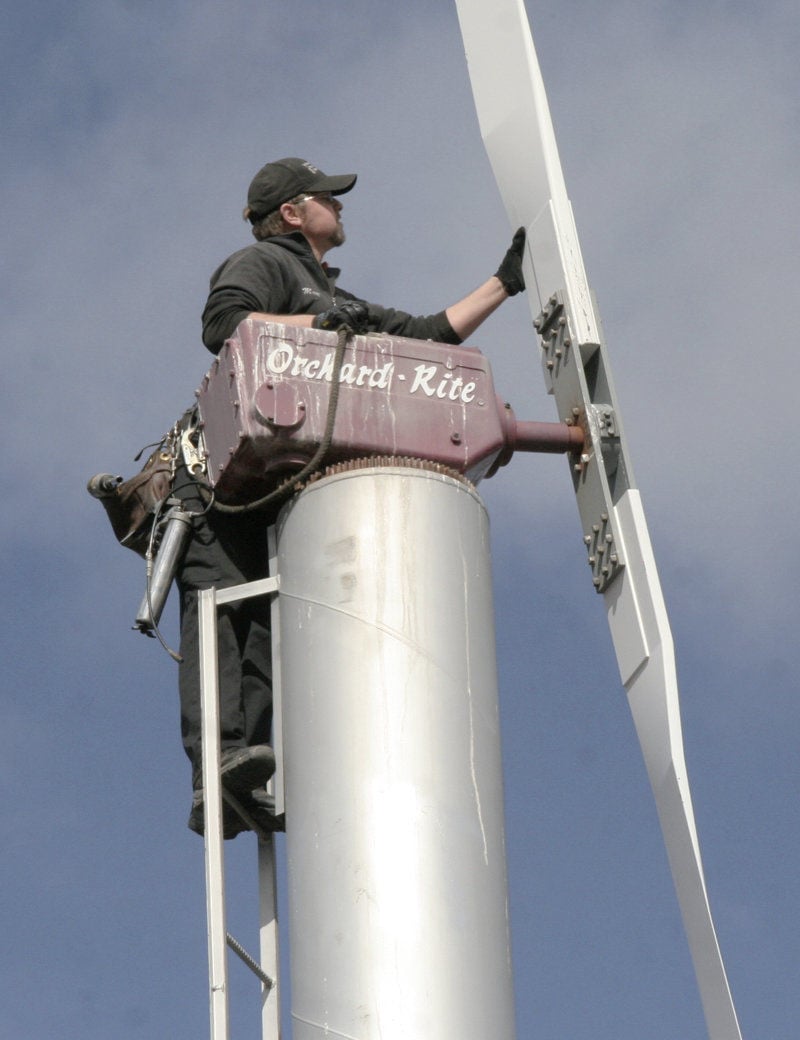 Matt Ott checks the 19-foot-long blade atop the 35-foot wind machine. Those are standard dimensions of the machines that blow air hundreds of feet to protect 12 to 14 acres of orchard from frost. 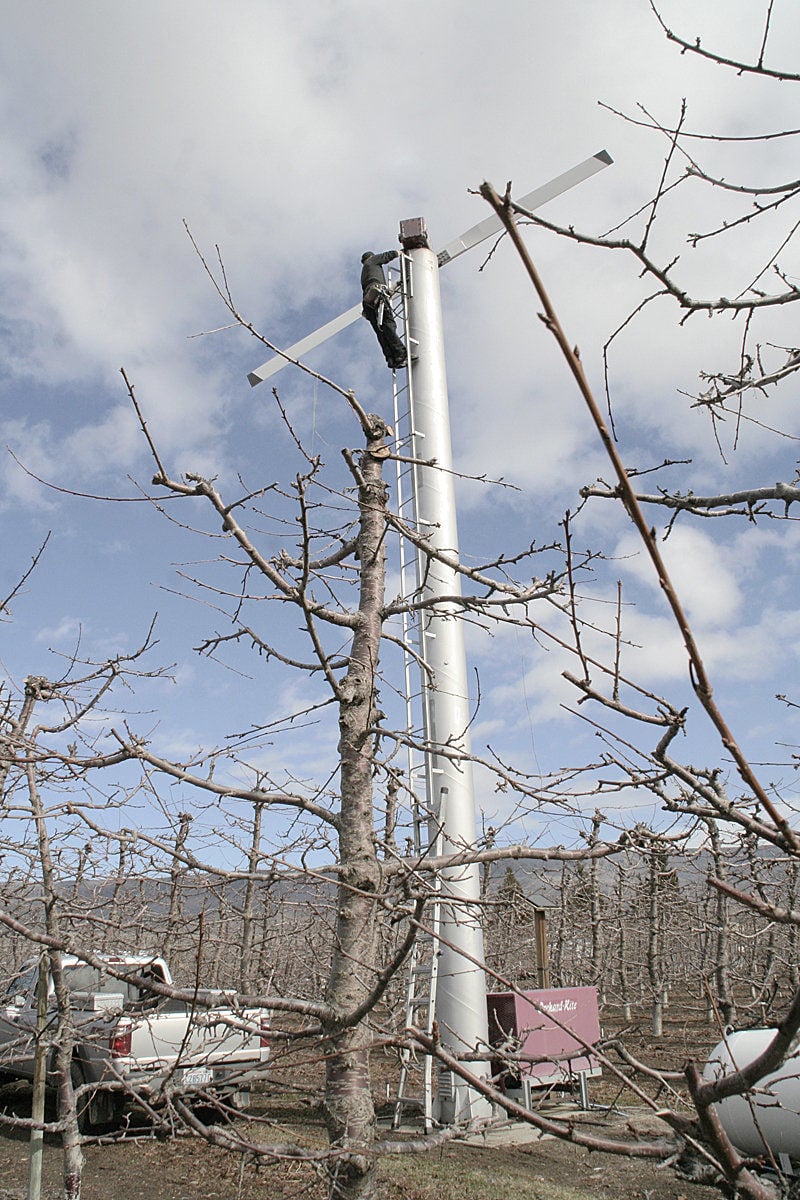 Matt Ott checks the 19-foot-long blade atop the 35-foot wind machine. Those are standard dimensions of the machines that blow air hundreds of feet to protect 12 to 14 acres of orchard from frost.

WENATCHEE, Wash. — Matt Ott doesn’t mind heights and that’s a good thing because he climbs plenty of 35-foot-tall wind machines in orchards this time of year, servicing them to be ready for spring frost protection.

“Falling isn’t something I think about. I’m focused on what I’m doing. My awareness stops at my feet. I try not to drop tools on my truck or a propane tank,” says Ott, 35, a partner in Wenatchee Wind Machine Service with his father, Bill, and his brother, Steve.

Ott actually loves heights. He did a lot of high rope work as an Eagle Scout, but says, “As much fun as this is, I have the mindset I’m going home every night to my family.”

He inspects his 5/8-inch poly lanyard, belt and rigging before each trip skyward.

Frost protection is a big deal throughout tree fruit orchards and vineyards of Central Washington. Depending on weather, it’s a bigger concern some years more than others. Temperatures dropping just a few degrees below freezing for too long a time can wipe out a crop.

Thousands of wind machines cover frost pockets, low spots, in orchards and automatically or manually kick into gear when temperatures get too low. They pull warm air above the trees down to tree level preventing flower buds from freezing.

Mid-March to mid-May is spring frost season. The machines are used in June to blow rain off cherries and for vineyard frost protection in fall.

Powered by Ford V10 engines on propane, 19-foot blades run at 600 rpm and blow air many hundreds of feet. One machine can warm 12 to 14 acres of orchard by 4 to 5 degrees. Sometimes that’s just enough.

“There was a devastating frost in about 1974. My dad was a fieldman and loan officer for Growers Credit in Brewster. One of his clients took a big loss and another grower with a wind machine had a good crop,” said Bill Ott, 64. “So dad went to California and bought up all the machines he could and got into the business.”

There were not many wind machines in Okanogan County at the time. That changed when Cork Ott started Northwest Frost Control in Manson.

Bill Ott grew up in the business and ran it with his dad until they decided to do other things in about 1994.

Bill Ott, and his wife Pat, owned and operated Miller’s Camera in Wenatchee from 1989 to 2008. Then they sold it and about a year later he began Wenatchee Wind. Northwest Frost Control had gone out of business and Bill found many of his old customers eager to have him back.

“Dad was dying for something to do and he was a tremendous help for a couple of years,” Ott said.

Now his sons and Nick Craig make up his crew. They are busy year-round with customers from Mattawa to Omak and a ways beyond. They service all brands of wind machines and sell Amarillo. New machines of all the brands run in the $30,000 range.

Wenatchee Wind is the northcentral Washington dealer of Tow and Blow, a portable wind machine from New Zealand distributed in the U.S. by Chamberlin Agriculture, Wenatchee. Beside being portable, it’s very quiet and is increasing in sales, Ott said.

He climbs the 35-foot-tall towers like his sons and they each have other roles.

“Dad is our orchard whisperer,” said Matt Ott, explaining that Bill Ott is adept at pinpointing the best locations for wind machines based on wind drift patterns and other factors.