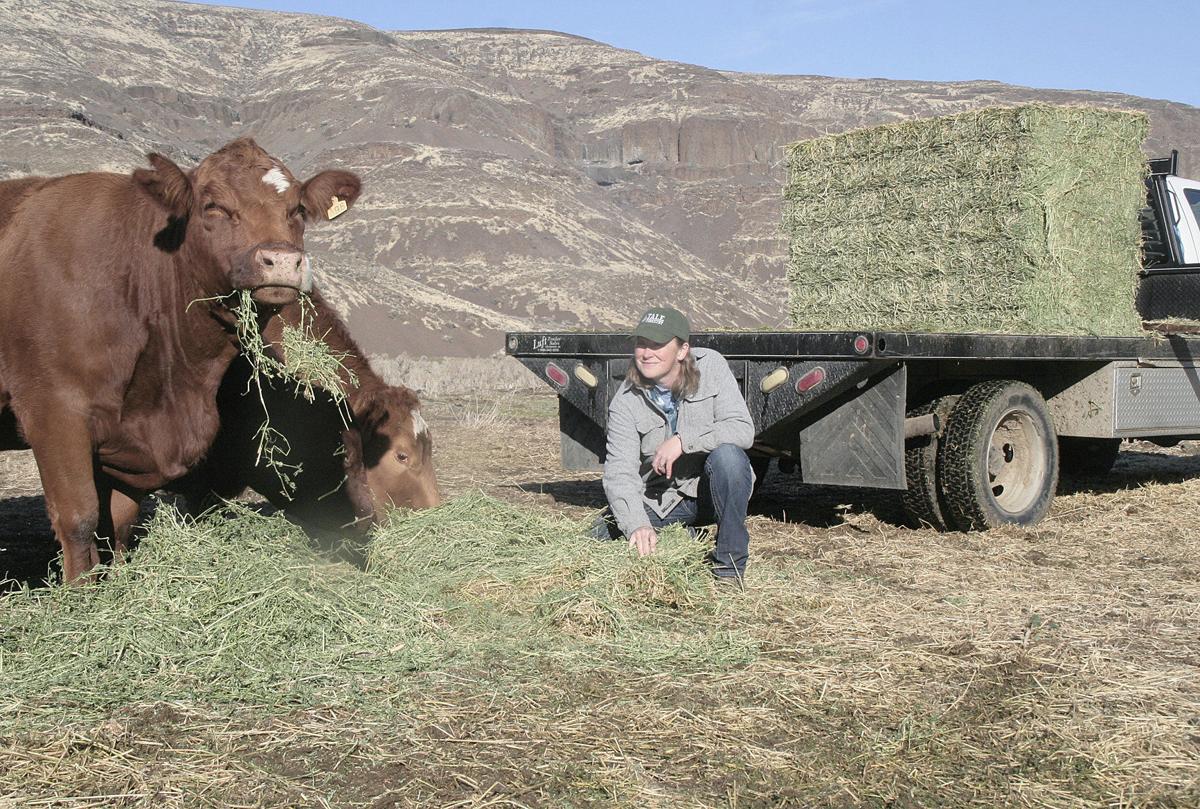 Molly Linville feeds her cows on KV Ranch near Palisades, Wash., on Nov. 29. She's reduced the herd after losing 91 percent of her grazing ground for the next two years due to last summer's Sutherland Canyon Fire. 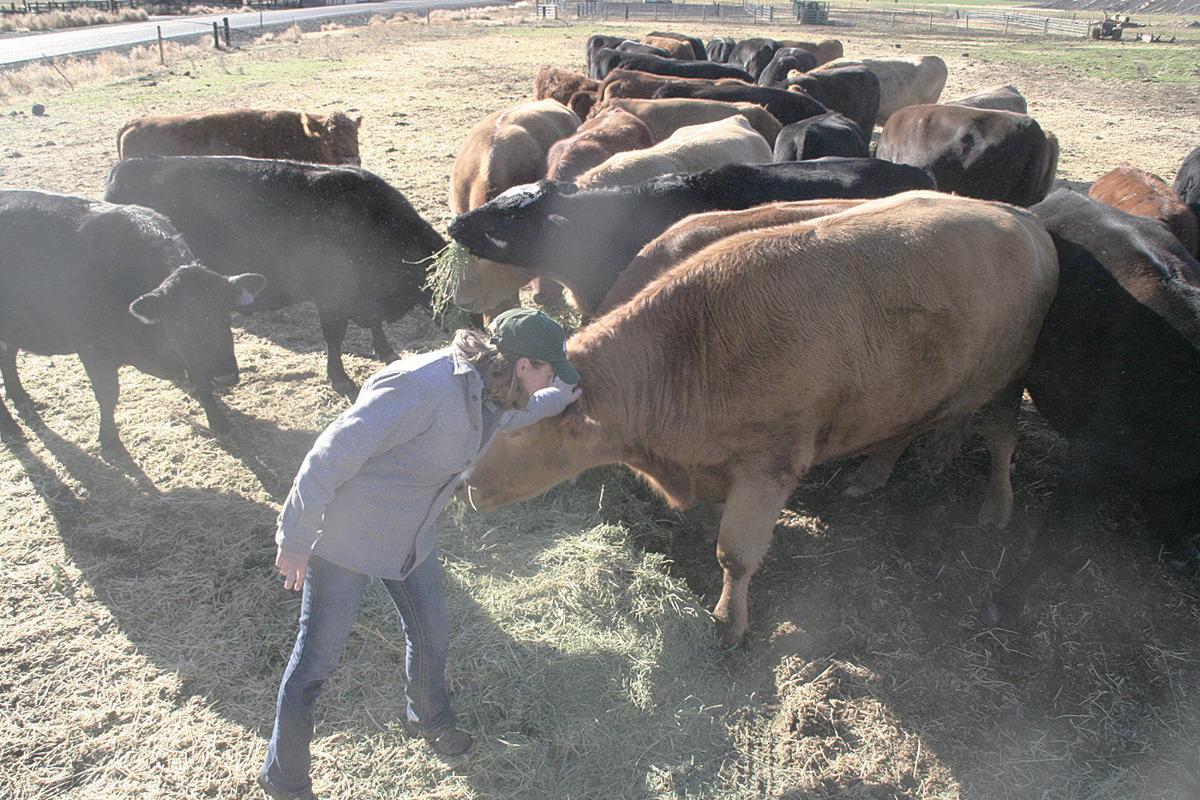 Molly Linville pets the lone steer, Sailor, in her herd of 27 cows on KV Ranch near Palisades, Wash. She reduced the herd by more than half after losing most of her grazing ground to wildfire last summer.

Molly Linville feeds her cows on KV Ranch near Palisades, Wash., on Nov. 29. She's reduced the herd after losing 91 percent of her grazing ground for the next two years due to last summer's Sutherland Canyon Fire.

Molly Linville pets the lone steer, Sailor, in her herd of 27 cows on KV Ranch near Palisades, Wash. She reduced the herd by more than half after losing most of her grazing ground to wildfire last summer.

PALISADES, Wash. — Like many ranchers throughout the West, Molly Linville is trying to recover from a horrific fire season, but she’s also is trying to change how firefighters view rangeland and a state wildfire policy that allows them to let it burn.

“Firefighters look out here and they don’t see anything. It’s wasteland in their minds. I thought they didn’t care. I said I lost everything and I got blank looks. What I’ve learned is they literally don’t understand the value of rangeland,” says Linville, 42, who operates the 6,000-acre KV Ranch, mostly by herself while her husband works overseas.

Most of the state’s 4.5 million acres of rangeland “is breakfast, lunch and dinner” for cattle, sheep and all sorts of wildlife, she said.

The ranch, which next year will have been in her husband’s family 100 years, and the nearby hamlet of Palisades are up an out-of-the-way valley, known as the Moses Coulee, about 25 miles southeast of Wenatchee in Central Washington state.

Linville saw one of several lightning strikes on a hilltop about a mile west of her house on June 26 that ignited the 37,891-acre Sutherland Canyon and Straight Hollow wildfires. She called firefighters who saved her house and other structures. With her border collie and using her ATV, she was able to save her 60 mother cows, plus calves and four bulls with no time to spare.

But most of the grazing land — 5,500 acres — the Linvilles own burned along with 14 miles of fencing. After consulting soil scientists and other ranchers who have gone through fires, they decided it’s best not to graze the land for two years.

They had been planning to expand their herd by retaining heifers this fall, but instead they sold the heifers and half of their mother cows for lack of grazing. It will set their program back five years.

“The thing we lost the most by selling these cows is all the selective breeding I’ve been working on for years,” Linville said. “I have these cows where they are willing to find their way up through the basalt cliffs and graze on top. They get fat on bunch grasses. Their feed conversion on this dry rangeland is excellent.”

She said area ranchers believe that firefighters squabbling over fire district boundaries and not being proactive caused them to miss several opportunities to stop the fire before it significantly spread.

“It clearly didn’t go well,” she said. “I wanted to figure out what went wrong and why and how to fix it.”

She met with area fire chiefs and discovered a lack of appreciation of the value of rangeland. Another problem is that two-thirds of the ranch and a large portion of the Moses Coulee aren’t in any fire district.

But the biggest problem was a state Department of Natural Resources policy that does not require DNR to fight fires on more than 600,000 acres of DNR-owned non-timbered rangeland in Eastern Washington. Fighting fire on those lands is a low priority.

“That was shocking. That our state Department of Natural Resources doesn’t need to protect natural resources. We spend millions of dollars breeding (endangered Columbia Basin) pygmy rabbits in a zoo to release into Grant County and an agency like DNR can just let habitat burn. If a rancher did that, at bare minimum he would be fined,” Linville said.

“This is not an indictment against DNR firefighters. It’s DNR policy. It makes DNR a terrible neighbor because they just watch it burn onto your place,” she said.

Linville, who has a bachelor’s degree in wildlife biology, said she intends to seek legislation requiring DNR to fight fire on all of its rangelands.

Loren Torgerson, DNR policy adviser on wildfire, said it’s true most DNR trust lands in the Columbia Basin don’t receive fire protection because they are not forest land and not “assessed” for protection. To change that would take legislation to assess them, he said. Some of those lands may also pay a fire district for protection, he said.

When a fire occurs on those lands, DNR decides whether to fight it depending on circumstances and whether it would take resources away from lands DNR assesses for protection, Torgerson said.

DNR’s statutory responsibility is to protect forest lands. Wildlife habitat protection is “a byproduct,” he said.

The DNR Forest Fire Protection Assessment is collected with property taxes at a minimum rate of $17.70 per acre on private and state forest lands, generating about $10 million annually. It is part of approxmately $27 million for fire suppression in DNR’s annual budget. The balance comes from other state and federal funds.

DNR is considering reducing wildfire fuels through a new initiative and is aware of wildfire impacts on non-forested land and their value to landowners, Torgerson said.

“We don’t take that lightly but sometimes we have to burn out areas that we can’t safely bring under control. Those are tough decisions,” he said.

He said he has no first-hand knowledge of decisions made in fighting the Sutherland Canyon Fire and that it’s hard to second-guess fire commanders’ decisions after the fact. They have to consider safety and firefighters’ level of training, he said.

With the help of Kelly O’Brien, chief of Chelan County Fire District No. 3 in Leavenworth, Linville is embarking on a series of meetings and setting up curriculum to educate firefighters on the importance of rangeland to livestock and wildlife.

She has spoken to regional fire chiefs and the Washington State Fire Defense Committee, which includes the state fire marshal, emergency officials and representatives of the nine fire defense regions in the state.

She emphasizes cattle, wildlife and the tie to the state’s economy.

Cattle and calves produce revenues of $700 million to $850 million annually, making them the third- or four-highest value agricultural commodity in the state, according to the USDA National Agricultural Statistics Service. A 2014 Washington State University Extension analysis concluded the beef industry contributes $5.7 billion to the state economy each year.

“About 1 million head of cattle are slaughtered in the state every year, and people don’t understand those cows are not born in feedlots. Most begin their lives on rangeland or timber grazing allotments,” Linville said.

O’Brien said several things came to light when he met with Linville after the Sutherland Canyon Fire.

“I felt us as fire services didn’t have an understanding of ranch land, whether rangeland or not, and costs associated with it,” he said.

Linville’s presentations have been “well received” by fire chiefs and “we are working to put them into lesson plan form,” O’Brien said.

“Firefighters don’t understand who owns what and that fields or what looks like an old fence to us maybe very valuable to the rancher,” he said. “We need to get with the rancher, find out where the roads and water are and do some point protection and be more aggressive.”

Where local ranchers say firefighters dropped the ball in the Sutherland Canyon Fire was when the fire descended Frank’s Canyon on DNR land, crossed onto KV Ranch land and then crossed Palisades Road and spread onto thousands of acres in Grant County.

It’s also where Douglas County Fire District No. 2 ends and the rest of the valley, including two-thirds of KV Ranch, are in no fire district. It’s a no man’s land that may have been a factor in firefighting delays, Linville said.

There are numerous other no man’s lands in Washington, Oregon and Idaho. Areas are too remote and vast and their tax base too low for local fire districts to want to annex them.

Valley residents are considering forming a fire association under the U.S. Bureau of Land Management. The big thing, Linville said, is it would allow the federal government to surplus fire equipment to the association. It also would place ranchers under BLM fire command or whatever fire command BLM appoints.

Linville sees value in her efforts.

Even on rangeland where there are no cows, she says, fires need to be nipped quickly because grass and sagebrush are fuels that can give a fire momentum in a hurry.

While the Linvilles’ loss is significant, it would be far worse and perhaps force them out of business if it were not for the fact that they have no debt.

“After the fire,” she said, “I just needed to be part of the solution.”