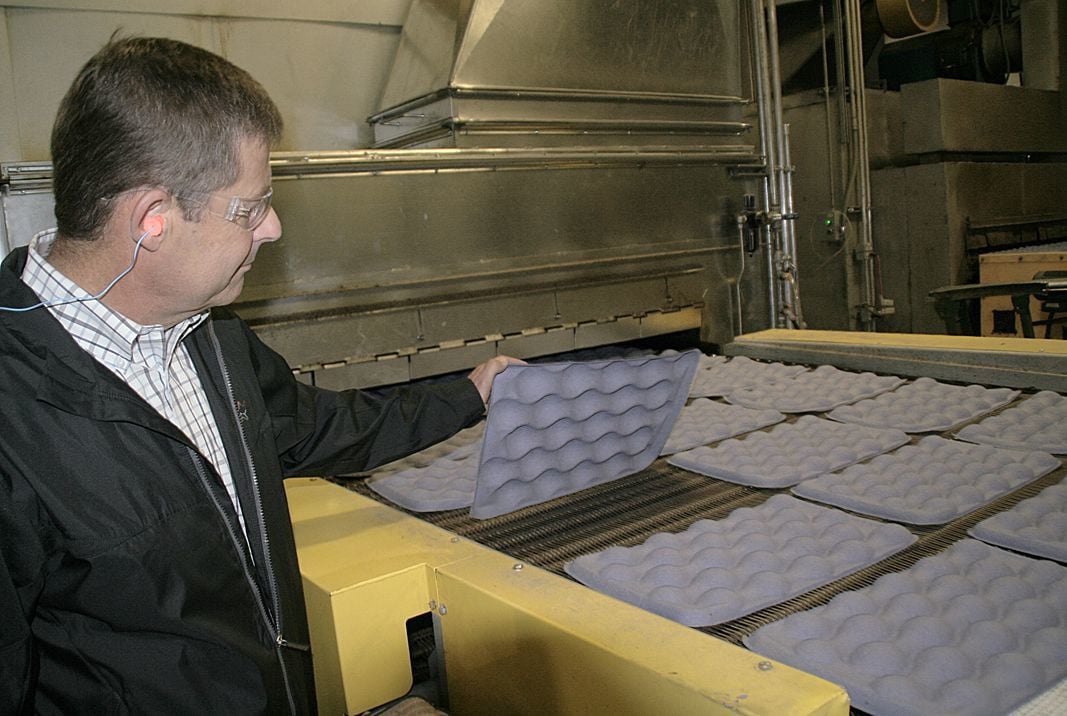 Dan Wheat/Capital Press Ross Riedinger, vice president of sales and marketing at Keyes Fibre Corp. in Wenatchee, Wash., lifts a molded fiber apple tray hot out of the oven of the company's newest machine on Oct. 3. The company has added to its production capacity in anticipation of larger apple crops. Dan Wheat/Capital Press Ross Riedinger, vice president of sales and marketing at Keyes Fibre Corp. in Wenatchee, Wash., lifts a molded fiber apple tray hot out of the oven of the company's newest machine on Oct. 3. The company has added to its production capacity in anticipation of larger apple crops.

WENATCHEE, Wash. — The foremost producer of apple packing trays in the nation has added another molding machine due to the increasing size of apple crops in Washington and elsewhere.

“We commissioned a new production line in September. The planning started over a year ago in anticipation of larger crops,” said Ross Riedinger, vice president of sales and marketing at Keyes Fibre Corp. in Wenatchee.

The fiber trays, molded from pulp from recycled paper, are widely used throughout the industry to separate and protect apples from bruising as they are packed inside corrugated cardboard boxes holding 40 pounds.

The new machine is the first since 2007 at Keyes Fibre. The plant has several, but Riedinger would not say how many.

The plant is the largest molded fiber plant on the West Coast and makes trays for apples, eggs, avocados and wine bottles. Riedinger would not disclose production figures but said the plant makes 60 percent of apple trays used in the nation.

Waste paper is collected from municipal recycling centers in Seattle, Portland, Spokane and Bellingham and in Central Washington and is pulped at Keyes Fibre. Pulp flows into the molding machines that produce the trays. They come off lines and cool before being wrapped and shipped.

The plant employees about 100 workers and runs four rotating 12-hour shifts to operate 24 hours per day, seven days per week, 365 days a year.

“Our growth is in the apple segment. Our egg segment is far more stable, as is our avocado and direct-to-consumer wine shipping,” Riedinger said.

“If you order wine online it likely comes in a molded fiber insert inside a corrugated box. We make the insert,” he said.

“So it’s important we ramp up capacity to meet the needs of the growing apple industry,” he said.

Washington is in the middle of harvesting a record crop estimated at 140.2 million fresh-packed boxes that will be packed from apples stored throughout the year. That compares with 115 million boxes last year and the prior record of 128.8 million in 2012.

Growers in Washington, Michigan and New York anticipate large crops in the future from new and replacement higher-density tree plantings.

Larry Pearson, manager of Dolco Packaging in Wenatchee, said that company is increasing production of its polystyrene foam apple trays because of the larger apple crop. It also is making pear trays for the first time. Dolco makes 50 types of food packaging at plants in five states.

Dolco is the only producer of polystyrene foam trays.

Most of the pear industry doesn’t use trays but packs pears individually wrapped in tissue in 44-pound boxes, Riedinger said.