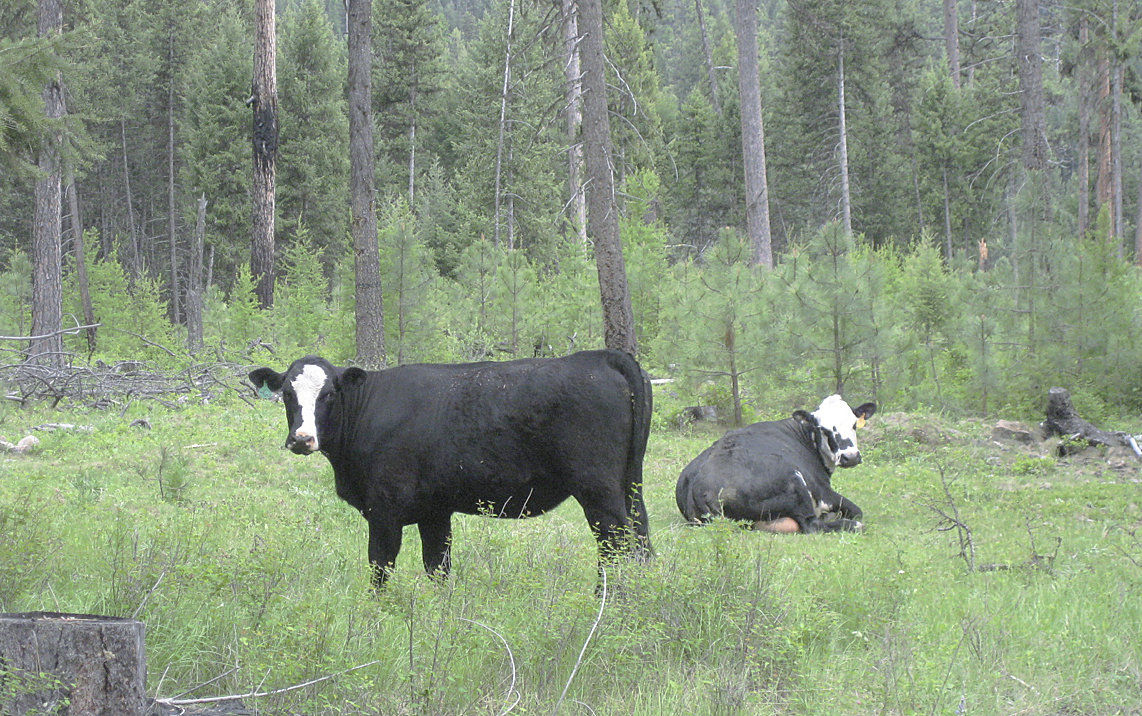 Cows graze in the Colville National Forest in northeast Washington. A cattlemen's association says proposed changes to how the Forest Service manages the 1.1 million-acre forest will effectively end grazing. 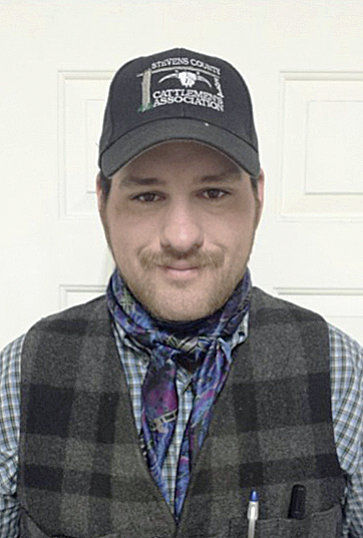 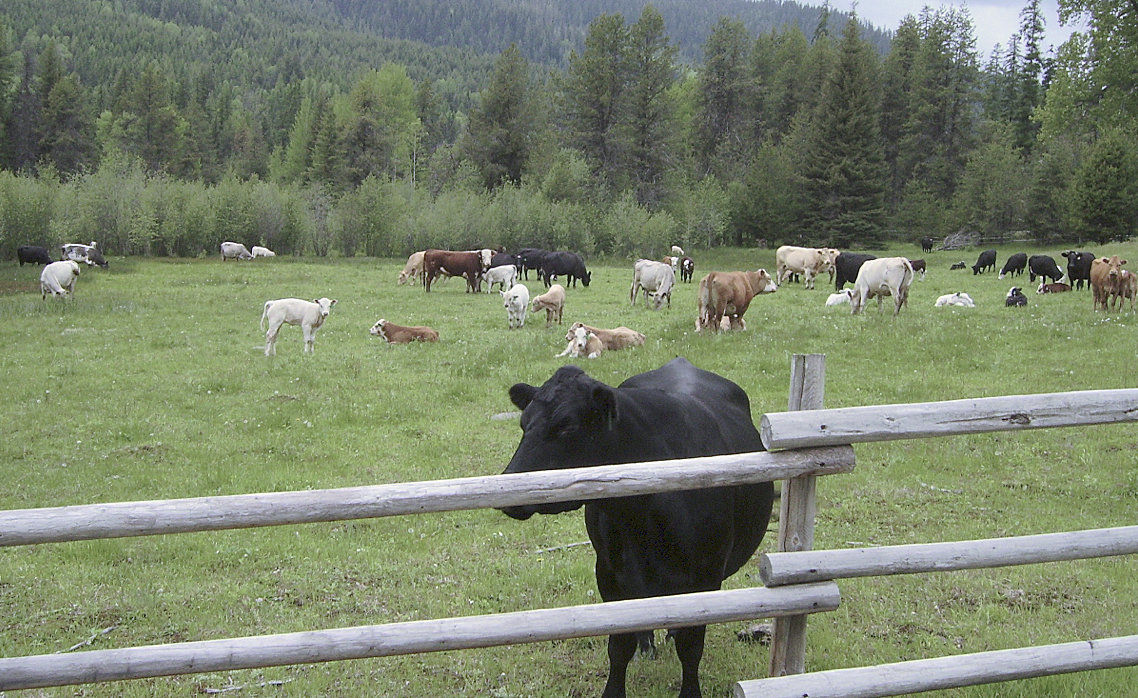 Cows graze in Smackout Meadows in the Colville National Forest in northeast Washington. A cattlemen's association says a forest plan proposed by the Forest Service would effectively end grazing in the 1.1 million-acre forest. 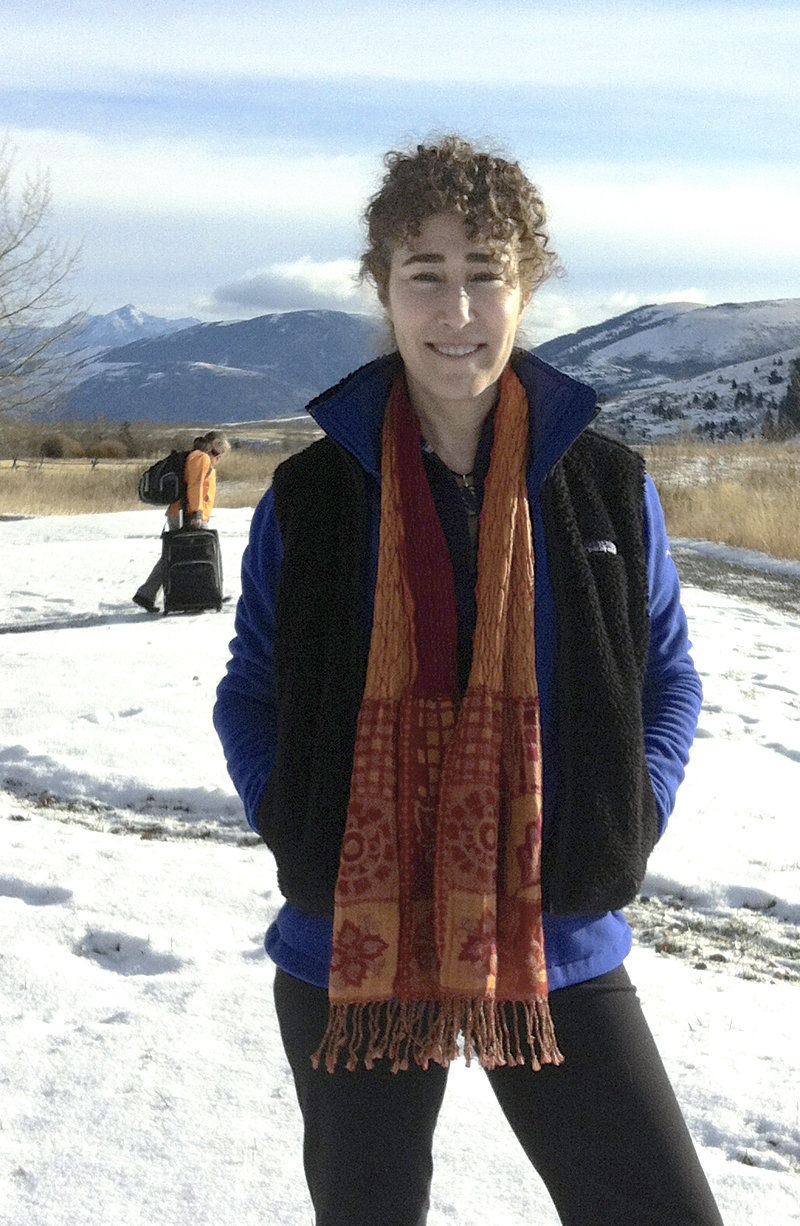 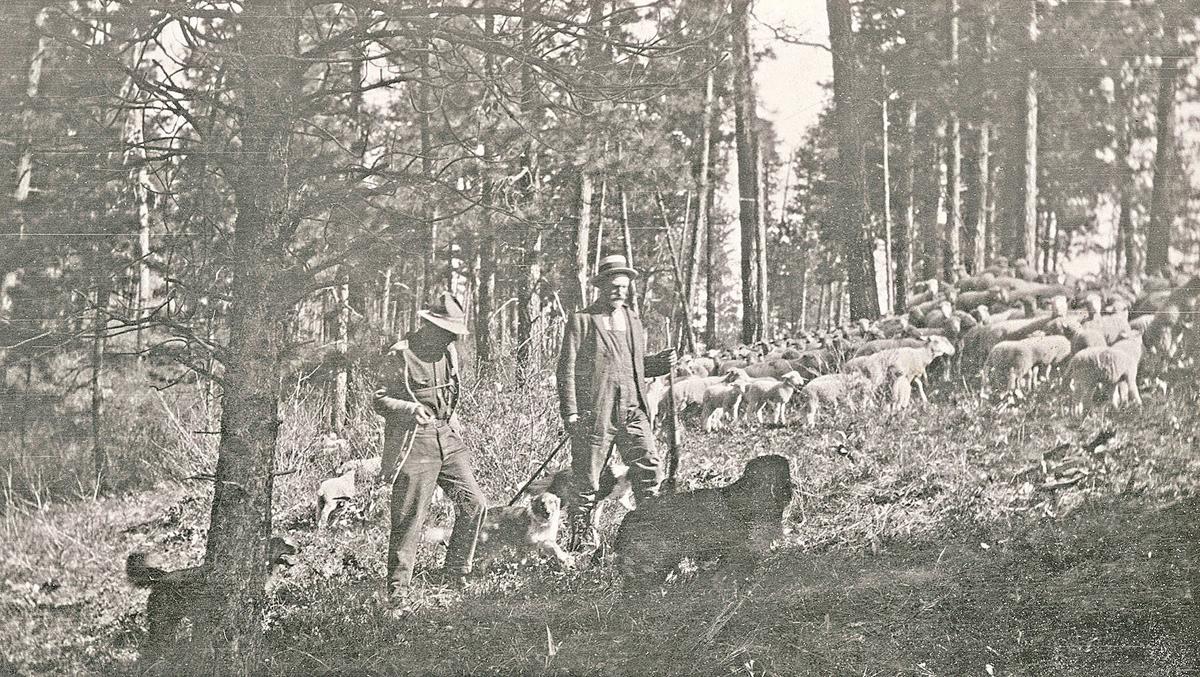 In this historical photo from 1943, ranchers herd sheep in the Colville National Forest in northeast Washington. A cattlemen's association says a proposed forest plan would effectively end livestock grazing in the 1.1 million-acre forest. No sheep currently graze in the forest. If sheep return, they will have to stay away from bighorn sheep because of the threat of disease transmission. 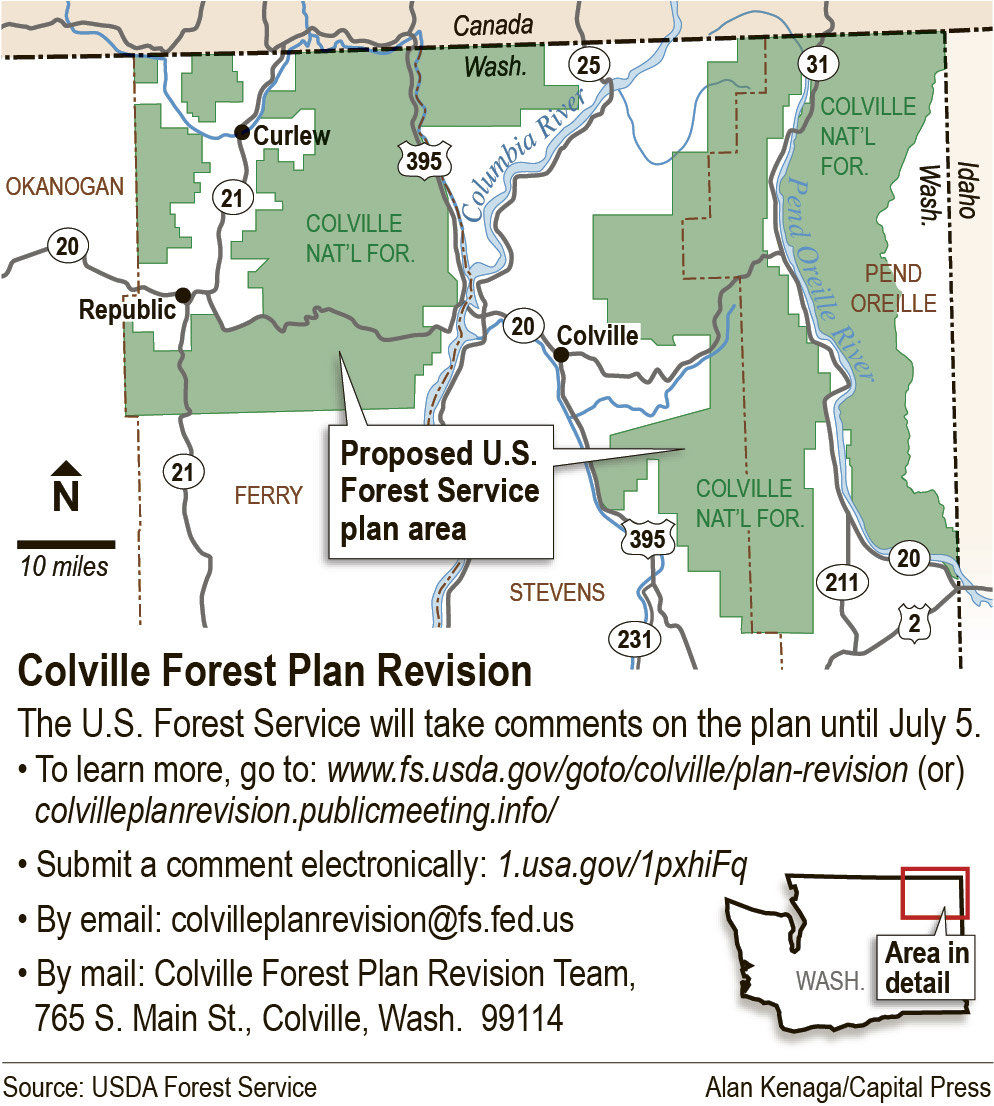 Cows graze in the Colville National Forest in northeast Washington. A cattlemen's association says proposed changes to how the Forest Service manages the 1.1 million-acre forest will effectively end grazing.

Cows graze in Smackout Meadows in the Colville National Forest in northeast Washington. A cattlemen's association says a forest plan proposed by the Forest Service would effectively end grazing in the 1.1 million-acre forest.

In this historical photo from 1943, ranchers herd sheep in the Colville National Forest in northeast Washington. A cattlemen's association says a proposed forest plan would effectively end livestock grazing in the 1.1 million-acre forest. No sheep currently graze in the forest. If sheep return, they will have to stay away from bighorn sheep because of the threat of disease transmission.

Cattle have grazed in the Colville National Forest in northeast Washington state for more than a century, but ranchers fear their livestock could soon be forced off the land.

Coming their way is a new plan to guide forest managers for the next 15 years. Though it doesn’t cancel specific activities such as grazing, the directives under consideration include broad mandates to protect streams, plants and trails from cattle.

The agency asserts that grazing may continue at current levels, but the plan says that in some areas grazing may be less intense and increase ranchers’ operating costs.

Members of the Stevens County Cattlemen’s Association, whose members graze cattle in the national forest, describe the plan’s layers of regulations as “confusing and arbitrary” and would make grazing there impractical. The group says the proposed requirements are unnecessary and unrealistic, including those that would keep cattle away from water.

“You’d have to keep pushing cows out of every little draw,” said the association’s president, Justin Hedrick, whose family has grazed cattle in the national forest since World War II. “It’s unattainable.”

The Forest Service has adopted a policy of only responding in writing to submitted questions about the plan, citing the need to keep the plan from being mischaracterized.

However, Colville National Forest spokesman Franklin Pemberton did say the plan will not end grazing and that forest officials plan to meet soon with ranchers to discuss their concerns.

At stake is the viability of cattle ranching in this region of Washington state and other parts of the West, where management and transportation plans are under revision for millions of acres of national forests and other federally owned lands.

Tucked in the corner of Washington state where its border intersects with those of Idaho and Canada, the Colville National Forest’s 1.1 million acres cover nearly one-third of Stevens, Ferry and Pend Oreille counties. It’s also the only part of the state with an established wolf population, another challenge for ranchers.

Logging and grazing have both decreased in the Colville over the past 25 years.

The first grazing allotment in the national forest was issued in 1911. By 1988, as many as 7,000 cow-calf pairs were permitted to graze from June to October in the Colville. The number has since declined by more than 21 percent to fewer than 5,500 pairs.

Yet the remaining grazing creates significant economic activity, generating 98 jobs and revenue of $1.5 million, according to the Forest Service.

Hedrick acknowledged that federal grazing fees are low — this year it will be $2.11 for a cow and calf to forage for one month — but operating costs such as labor, fuel and equipment in the national forest are substantial.

Ranchers say they depend on the national forest to maintain their livelihood. If it becomes impractical to graze cattle there, the cows won’t have anywhere to go in the region because surrounding summer grazing lands are already taken, Hedrick said.

He figures his family’s ranch would have to reduce its herd by 800 head — one-third of the total operation.

“Any other available land basically is tied up in agriculture, so it makes getting a lease fairly difficult,” he said. “It’s a significant amount of land. It’s the heart-and-soul of the whole tri-county economy. It’s a big deal.”

The Colville National Forest currently operates under a plan adopted in 1988. Work on a new plan began more than a decade ago. The Forest Service held public meetings over the years on the plan’s progress. Interest picked up in February when the plan, written under the direction of Pacific Northwest Regional Forester Jim Pena, was released for public comment. The comment period was extended last week to July 5.

The revised plan reflects the tension between the changing demands on federal land management in the West. Prior to 1988, forest managers thought grazing was of “little public interest,” according to the old plan, in which they confessed to being surprised by any public complaints about grazing.

In the revised plan, forest managers say they have resisted calls from vocal special interests to ban grazing entirely.

Meanwhile, according to the plan’s introduction, forest managers are increasingly focused on “providing quiet, natural places for personal renewal while emphasizing planning and restoration of forest ecosystems.” Such an added focus, according to the Forest Service, is vital to building public support for federal land management.

Some conservationists say the Forest Service, generally, has not acted fast enough to curb grazing, which they claim amounts to the public subsidizing environmental destruction.

Cattle should be kept away from streams and grazing seasons should be short enough to give plants time to flourish, she said.

“It seems they (the Forest Service) are very accommodating to livestock, and we need better protection,” Spivak said. “Livestock conflicts with a lot of other uses.”

In written response to questions, Colville National Forest managers repeatedly made the point that the plan won’t change grazing practices — directly. Changes could come, however, in allotment-by-allotment adjustments.

The changes could include “shortened grazing seasons and/or restricted livestock access to streams that have federally listed threatened or endangered fish spawning beds,” according to the Forest Service.

The plan’s mandates include:

• Salt blocks and watering tanks would be prohibited around rare plants.

• Grazing should be managed to maintain conditions that support snowshoe hares, a main food for Canada lynx.

• Cattle should be managed to discourage congregating on trails, destination areas and cultural sites.

• Livestock must be kept away from spawning fish.

• Stubble height of at least 6 to 8 inches should be maintained near waterways.

• Braided trails in some areas should be blocked.

• 69,000 acres of additional wilderness area would be designated, with no new grazing permitted in that area.

• Domestic sheep would not be allowed near bighorn sheep because of the potential for transmitting disease. No domestic sheep currently graze in the national forest.

The Stevens County Cattlemen’s Association says the requirements, when taken together, will mean the end of grazing in the Colville National Forest.

“We do not need a plan that creates unobtainable standards like having 6 to 8 inches of stubble height in a riparian area,” Hedrick said. “We need a plan that has guidelines that reflect the consistent effort ranchers make to keep their allotments in good condition.”

More information about the plan and how to comment is available on the Internet at www.fs.usda.gov/colville.