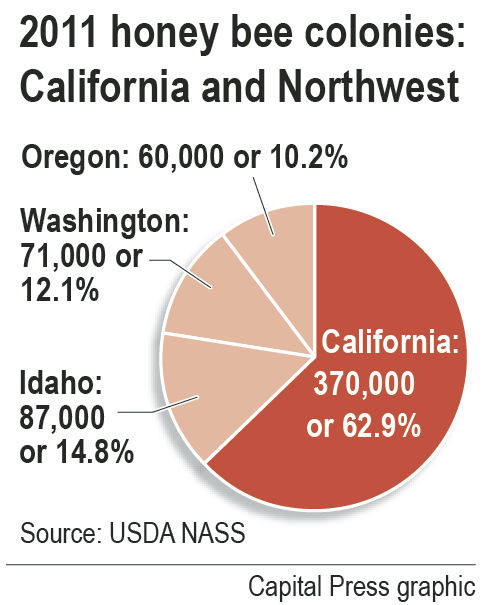 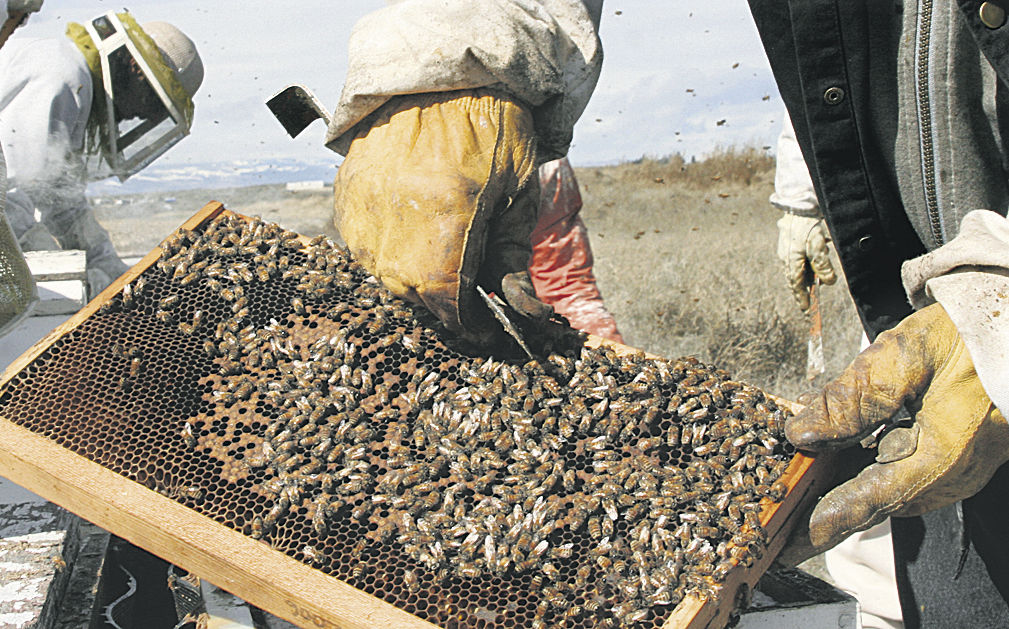 Dan Wheat/Capital Press Tim Hiatt finds and replaces a queen as spotty brood on this frame indicates the queen was weak. New queens from Hawaii cost $20 apiece and are just one of the Hiatts' increasing costs. 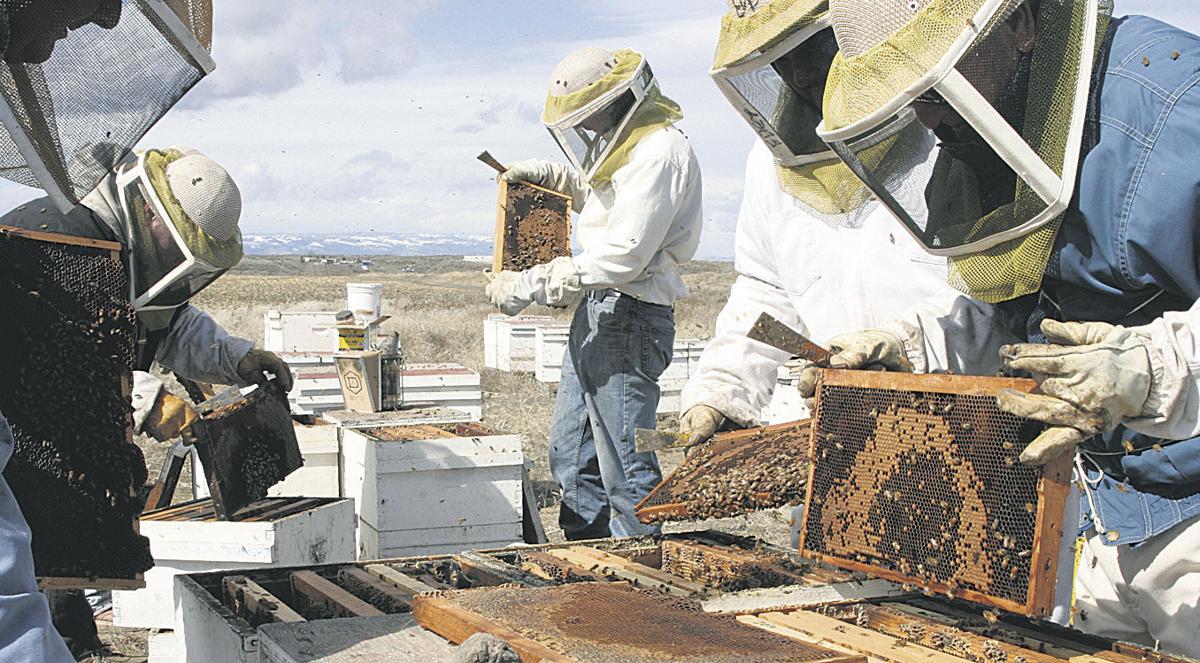 Dan Wheat/Capital Press Sid Hiatt,right, co-owner of Hiatt Honey Co., examines a hive in his bee yard southwest of Ephrata, Wash., March 28. Young bees yet to hatch are under the light-colored arch in the frame he holds. Honey is under the arch of wax in the frame lying down. The Hiatts are dividing the colonies so they can multiply.

Dan Wheat/Capital Press Tim Hiatt finds and replaces a queen as spotty brood on this frame indicates the queen was weak. New queens from Hawaii cost $20 apiece and are just one of the Hiatts' increasing costs.

Dan Wheat/Capital Press Sid Hiatt,right, co-owner of Hiatt Honey Co., examines a hive in his bee yard southwest of Ephrata, Wash., March 28. Young bees yet to hatch are under the light-colored arch in the frame he holds. Honey is under the arch of wax in the frame lying down. The Hiatts are dividing the colonies so they can multiply.

EPHRATA, Wash. -- Steve Hiatt suits up and enters the bee yard with no fear. At 45, he has worked with bees his entire life and only been seriously stung once.

That happened when he was 14 and about 80 bees got up his pant leg and attacked his leg.

These days a greater fear for him is keeping Hiatt Honey Co. financially healthy. Located on B Street in Ephrata, the company faces increasing expenses, tightening margins and, like most commercial beekeepers across the United States, losses of 30 to 35 percent of its bees each winter.

Annual bee losses were 10 percent 20 years ago, but disease, parasites and, the Hiatts suspect, pesticide exposure all take their toll.

Unlike others, however, the Hiatts have not experienced colony collapse disorder, a phenomenon where bees leave their hives for unknown reasons and never return. But they know of companies larger than theirs that have been devastated by 50 to 90 percent bee loss from colony collapse.

Research continues into the cause of the disorder, and the latest thinking is that it's an combination of several factors, including pathogens and nutrition, said Tim Hiatt, Steve's brother.

"Part of our fear is a big loss," Tim Hiatt said. "We've built in handling 30 to 35 percent loss a year, but we're not sure how we'd come back from a huge loss."

Carol Hiatt said she thought she and her husband, Sid, were a bit crazy when they left good-paying jobs as teachers in Oregon in 1968 and bought a 1,000-hive bee business in Ephrata. But they grew their company to more than 15,000 hives with operations in Washington, California and North Dakota. It's a family affair, employing them and their six sons and families.

The Hiatts today have one of the five largest agricultural bee pollination services in Washington and one of the 30 largest in California. They rank among a few hundred industrial-size operations in the nation.

With upward of 1 billion bees, the Hiatts produce about 750,000 pounds of honey annually in North Dakota and California. They sell it to a company in Lancaster, Pa., that retails it nationwide as Dutch Gold Honey.

The honey provides between a third and half the company's annual revenue and pollination fees provide the remainder.

All of the bees are wintered in Madera, Calif., where brothers Jerry, 43, Chris, 37, and Bryan, 34, run the show. The bees bring top dollar, $150 per hive, pollinating California almond groves in February and March. The money is good because bees are in shorter supply that time of year. The Hiatts usually have about 12,000 hives when almond pollination starts.

After almonds, about 9,000 hives are trucked to the Hiatts' Ephrata operation to pollinate Washington tree fruit at $40 to $60 per hive. The rest remain in California to pollinate other crops and make honey from orange blossoms.

In Ephrata, brothers Tim, 47, Steve, 45, and Tony, 41, and their father, Sid, 76, have spent the winter repairing and building pine hive boxes. They're painted white to reflect summer heat.

As the bees arrive, they and several skilled Nicaraguan beekeepers hired through the federal H-2A guestworker program divide the hives. They take frames of bees from full hives and put them in empty boxes so the bees have room to reproduce.

The work of a bee is straightforward. They collect pollen from blossoms to feed their young. As they do that, they spread pollen from tree to tree. By mixing the varieties available to bees, growers cross-pollinate from one variety to another, increasing fruit size and yield.

Weather can be a factor. Low temperatures, rain and wind keep bees in their hives and reduce pollination.

In Washington state, the Hiatts keep their bees at eight yards near Ephrata, Soap Lake, Moses Lake and George. From there they truck hives to some 80 orchards.

By the end of May they collect all the hives again and truck them to Bowman, N.D., where the bees make honey from sweet clover. The California bees also are transported to North Dakota and all the brothers and their families gather there to run the honey business. By then the number of hives has grown to about 18,000.

"Honey is heavy. It's a lot of hard work," Steve Hiatt said.

Their wives and children return to Washington and California for the school year in the fall. The brothers wrap up the honey season in North Dakota and truck the hives back to California by Thanksgiving.

Trucking is done by contractors. Bees can overheat, suffocate and die if a truck stops too long. They can fly out of their hives, get lost or confused and return to the wrong hive where they're apt to kill the queen. Without a queen, colonies can die.

Trucks stop at night when bees are more likely to stay in their hives because it's cooler and dark.

Usually, 3 to 5 percent of the bees in a 560-hive truckload get lost or die in transit.

Trucking alone costs about $350,000 a year and is a big part of the Hiatts' expenses. But labor is the largest expense and runs about $750,000 a year, Tim Hiatt said. It goes to family members, year-round workers and the guestworker beekeepers.

Queens once lasted four to five years but now only a year or two because of viruses. New queens cost $20 apiece.

In 2004 and 2005, the Hiatts lost about half their bees to parasitic varroa mites. They bought expensive medications to save the rest.

"When the mites and diseases came in, our expenses went through the roof," Steve Hiatt said. "We never had to give them medicines and pollen, but we do six times a year now."

Not enough pollen is generated by the bees to keep them healthy, he said. Supplemental pollen costs $75,000 a year, Tim Hiatt said.

The Hiatts spend about $200,000 annually replacing their winter kill by buying more queens and dividing hives, he said. Sometimes they also buy functioning hives at $175 to $200 apiece or a package of two or three pounds of bees and a queen for $80.

On the revenue side, the $150 per hive for almond pollination keeps them afloat, Steve said. They can't charge much more than $45 a hive in Washington without being undercut by competitors, he said.

"We built our business on 50 to 60 cents per pound for honey. Now it has to be $1.60 to cover costs," Steve Hiatt said. But there's a limit to raising their honey price. Two-thirds of the honey sold in the U.S. is imported.

"Cheap honey from Argentina and China keeps our prices down," he said.

Their margins are tight, they said, but not as tight as right after their 2004-05 losses to varroa mite. They also have to maintain a financial cushion to cover an outbreak of colony collapse or other problems.

The six brothers hope some of their 25 children will run the business in the future, but they wonder how tight the margins will get.

Pollination service: 50 to 800 hives per almond orchard in the San Joaquin Valley, Calif.; 60 to 270 hives per tree fruit orchard in Washington state.