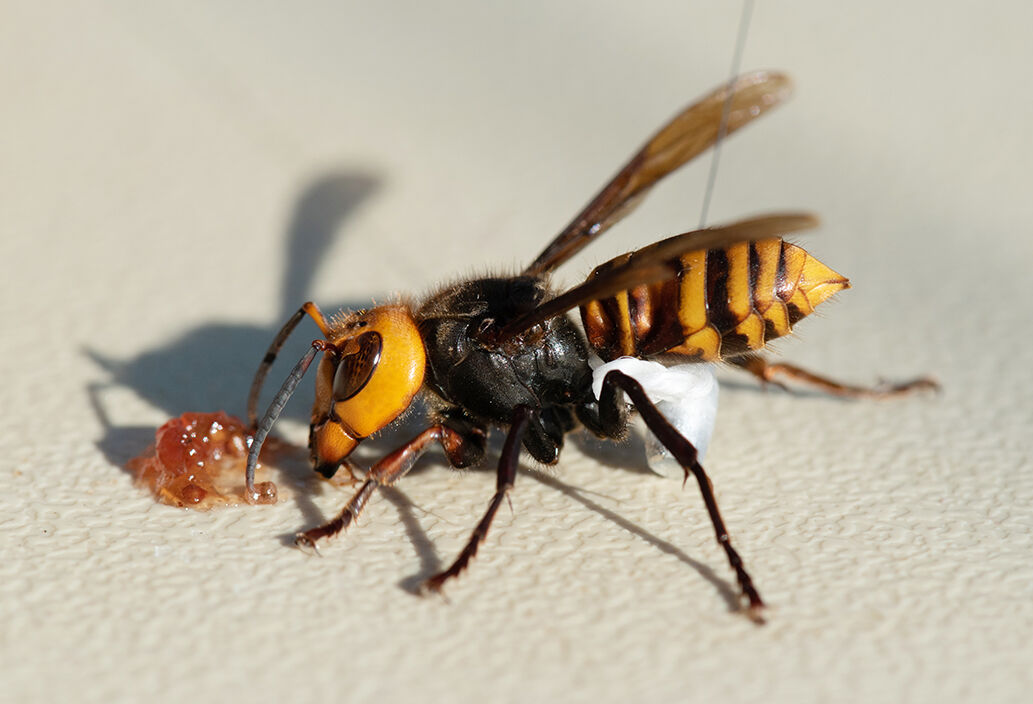 An Asian giant hornet with a tracking device tied to it eats strawberry jelly that entomologists offered. 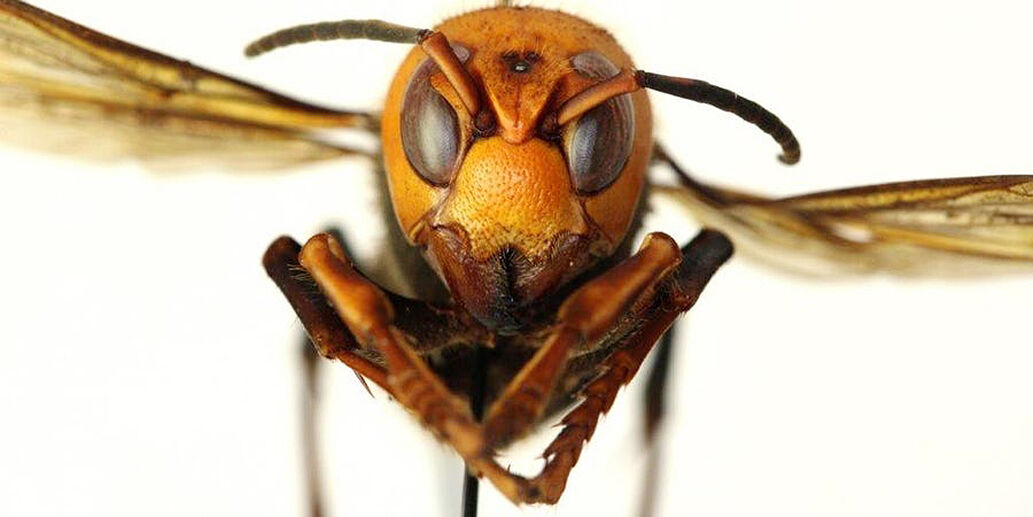 Asian giant hornets have taken up residence in Washington state and British Columbia in increasing numbers.

BLAINE, Wash. — An Asian giant hornet rescued from a trap designed to drown it led the Washington State Department of Agriculture to its nest on private property in Blaine — the first ever such nest found in the U.S.

The nest is 8 feet above the ground in the cavity of a tree on private property. Asian giant hornets usually nest in the ground, but occasionally nest in dead trees, according to the department.

The agency plans to attempt to eradicate the nest in a pre-dawn assault Saturday. Entomologists will approach the nest wearing face shields and protective gear resembling white space suits. The hornet, the world's largest wasp, stings and squirts venom.

"They will be stinging the suits and hopefully they won't be going all the way through," state entomologist Sven Spichiger said Friday afternoon.

Asian giant hornets are feared decapitators of honey bees and a threat to native pollinators. The hornets are now in their "slaughter phase," presumably searching for bee brood to fortify themselves for the mating season.

The hornets had never been confirmed in the U.S. until late 2019. All U.S. detections have been in Whatcom County in northwest Washington. Hornets also have been found across the border in British Columbia.

The discovery of the nest Thursday afternoon gives the department the first chance to eradicate one. Previously, the department captured two live hornets, but was unsuccessful in tracking either one back to its nest.

The department got a third chance when a new type of trap deployed by the department captured two Asian giant hornets on Wednesday. The next morning, two more live hornets were found in a trap baited with orange juice and rice wine.

"We decided to rescue them," Spichiger said.

The twin trappings gave the department four tries at electronically tracking a hornet to its next. The department tied tracking devices on with dental floss. For the first time, the department used USDA-supplied devices developed to research other types of insects.

The devices worked better than ones used previously by the department, boosting hopes for future chases, Spichiger said.

"I couldn't be more thankful," he said. "As strong as the radio tags were, I'm pretty confident as long as we can get live hornets that we can follow them back."

One hornet chewed through the string that held the tracking device, foiling that attempt. The hornet that eventually betrayed the location of the nest took its followers through woods. At one point, the hornet stopped and ate strawberry jelly served by the department.

The signal eventually led entomologists to the edge of a lawn 284 yards from where the hornet was released. Spichiger said he heard hornets buzzing past him. "I stepped back and realized we were standing right under the nest."

Once the nest was found, the department initially planned to move against it Friday. The operation was delayed by poor weather.

Another state entomologist, Chris Looney, was watching the tree Friday, checking to see whether the hornets have an escape route that needs to be closed.

Entomologists plan stand on scaffolding and seal the cavity with foam and plastic wrap and then vacuum out the hornets alive. The department wants to capture live hornets for research.

If the plan falters, the department will have pesticides at the ready. The lawn will give entomologists room to retreat, Spichiger said.

He estimated 100 to 200 hornets are in the nest. Dozens have been seen entering and leaving the tree, but have not been seen carrying food raided from beehives.

"We don't believe these guys are in slaughter phase right now, or at least they haven't found a nest to harvest," he said.

The landowner has given permission to eradicate the nest and take out the tree, the department said.

Asian giant hornets have been found in two other areas of Whatcom County, though recent captures and sightings have been around where the nest was found Thursday.

"There's a very good possibility there is more than just this nest," Spichiger said.

This story will be updated shortly.