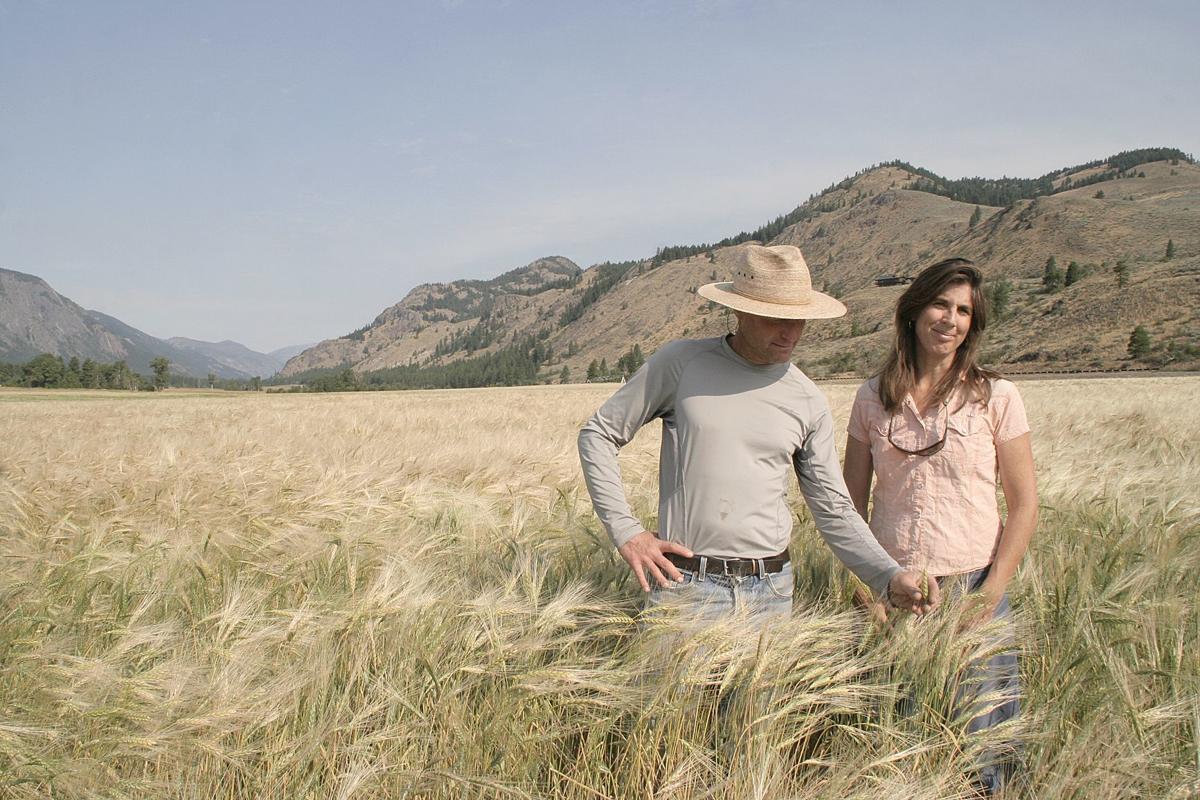 Dan Wheat/Capital Press Sam and Brooke Lucy in one of their fields of emmer near Winthrop, Wash., Aug. 1. They have been raising the ancient grain for more than 10 years and may be the only ones growing and processing it in the U.S. 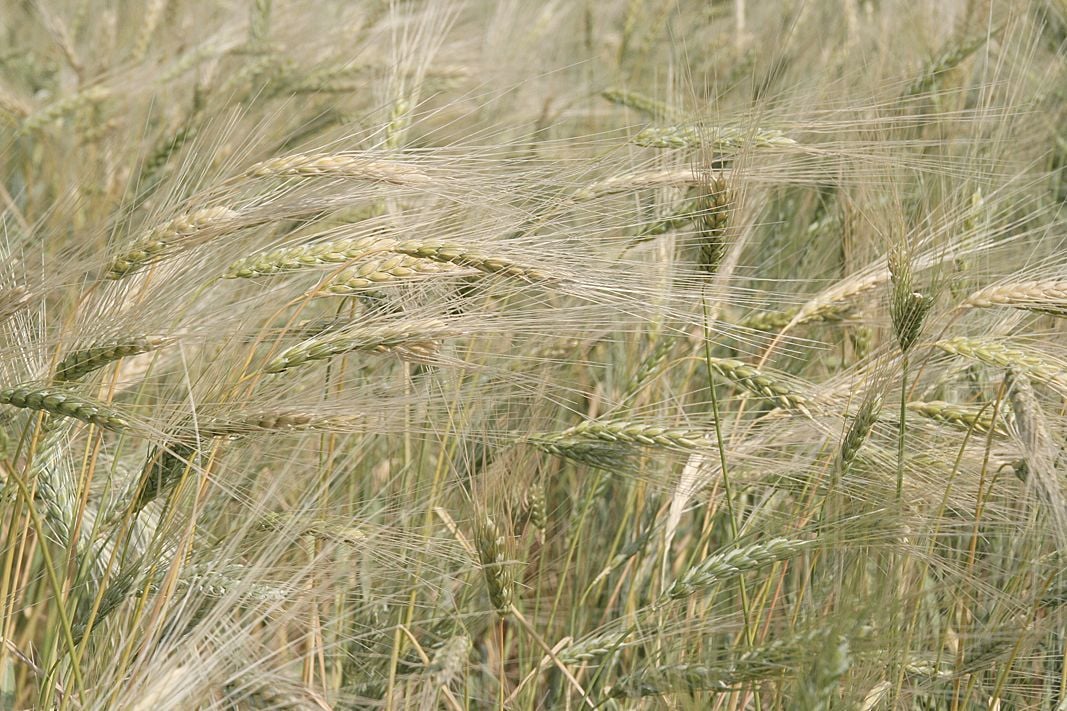 Dan Wheat/Capital Press Emmer has longer beards and stands taller than modern wheat varieties. Here it still has some green, a few weeks away from harvest. 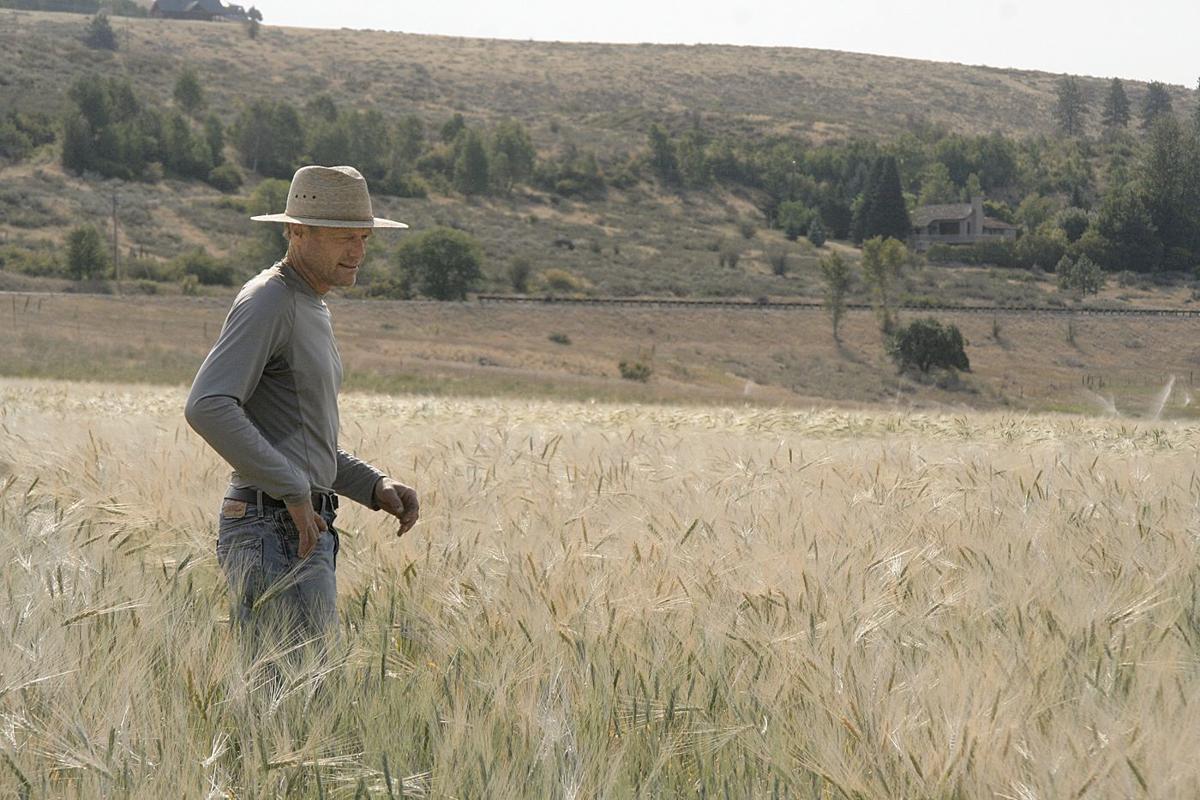 Dan Wheat/Capital Press Sam Lucy says this is a nice crop of emmer that was called "clean" by a Washington Department of Agriculture organic inspector. 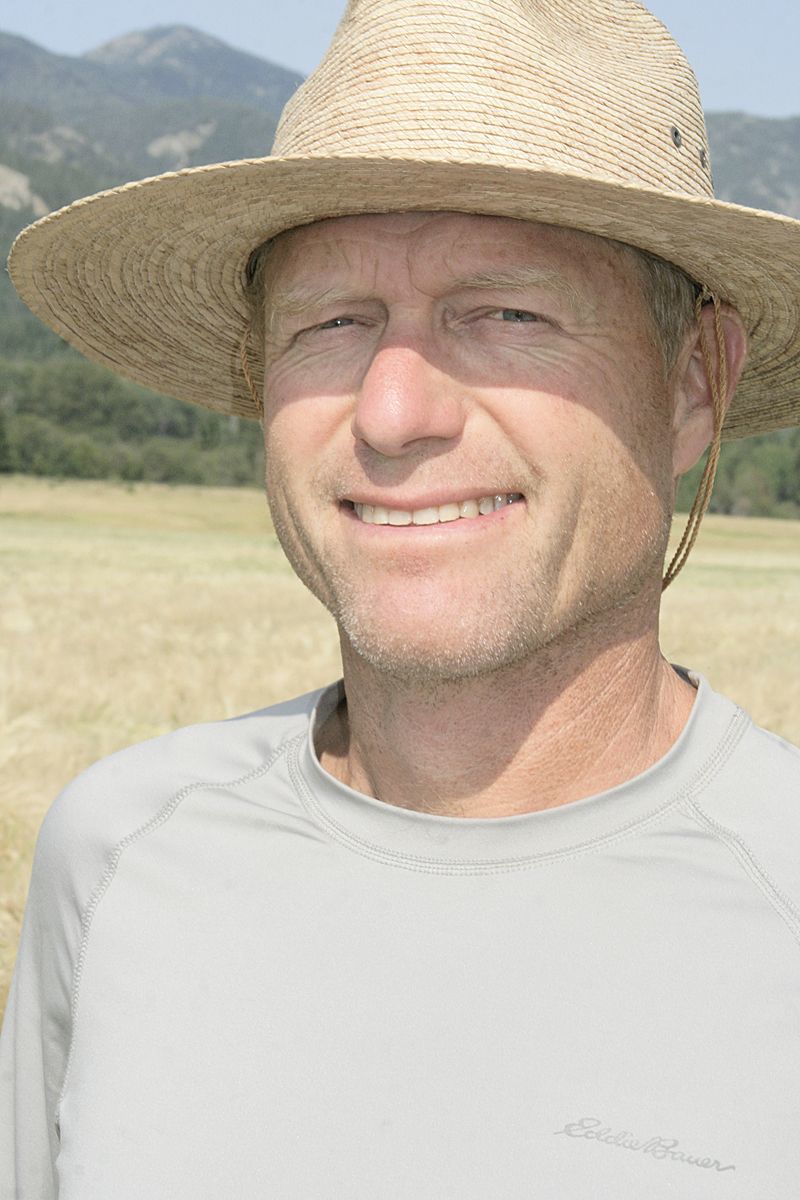 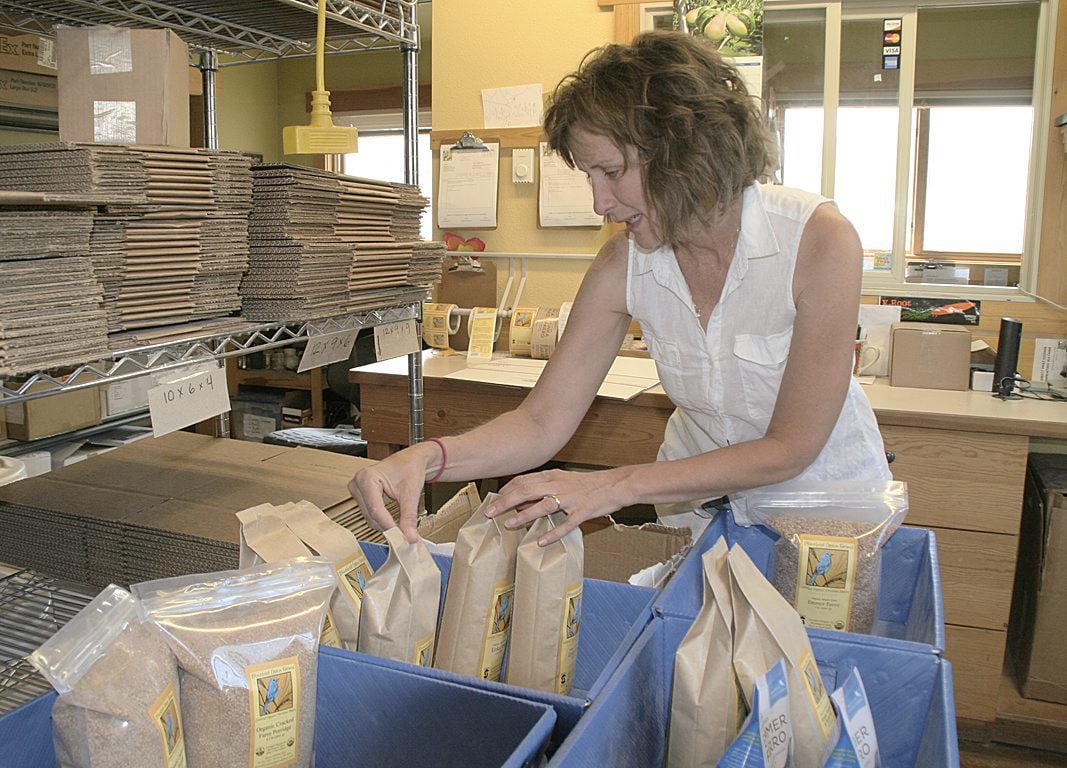 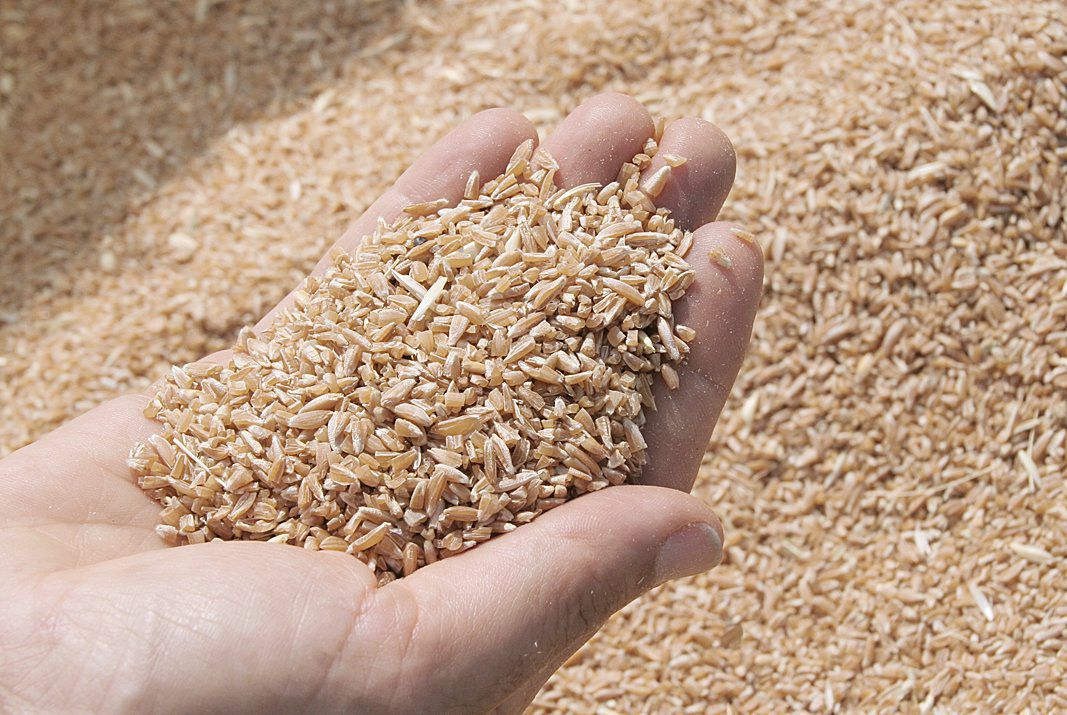 Dan Wheat/Capital Press Sam and Brooke Lucy in one of their fields of emmer near Winthrop, Wash., Aug. 1. They have been raising the ancient grain for more than 10 years and may be the only ones growing and processing it in the U.S.

Dan Wheat/Capital Press Emmer has longer beards and stands taller than modern wheat varieties. Here it still has some green, a few weeks away from harvest.

Dan Wheat/Capital Press Sam Lucy says this is a nice crop of emmer that was called "clean" by a Washington Department of Agriculture organic inspector.

WINTHROP, Wash. — Hidden among the grassy foothills of north-central Washington state is a farm that may be the only one of its kind in the nation.

They say “a handful” of other people grow emmer in the United States, but what makes them unique, they believe, is that they know of no one else who grows, stores and mills the grain, providing complete integrity of product from plow to plate.

Emmer originated in the Near East and was one of the first domesticated crops of the ancient world. It was the primary wheat grown in Asia, Africa and Europe throughout the first 5,000 years of recorded agriculture.

Emmer is hardy, nutritious and low in gluten, but by the beginning of the 20th Century it had been widely replaced by hybrid varieties of durum wheat for their greater yields.

Since World War II grain has been bred for volume, not nutrition, Sam Lucy says. More gluten was desired to make fluffy, white bread long associated with higher classes. Dark, whole-grain bread had been the staple of peasants and emmer was known as peasant grain.

“Ancient grains have more nutrients. They are simpler with fewer chromosomes and your gut digests it right off,” he says.

Lighter, fluffier bread lacked niacin critical for the brain and other nutrients that were added back in chemically, he says.

Today, emmer is a relict, or remnant, crop in mountainous areas of Europe and Asia and in Northern Africa. It is hardly known in the U.S.

Emmer is a farro — that is, an ancient grain. But the term farro is loosely used so the Lucys call their crop emmer farro to distinguish it from spelt, which is also called a farro but has been hybridized to have more gluten.

In the spring of 1993, Sam Lucy, then 28, left his family’s New Hampshire farm. He was the seventh generation of farmers, and came to Washington’s Methow Valley to live near his sister and brother-in-law.

Lucy had done some commercial fishing in Alaska, was running a small dairy with his brother and had a hankering to return west. His father and uncles owned “a fair amount of timber and farm land” and raised cattle, made hay and maple syrup and had a lumber and hardware business.

In the Methow, he went to work for Ron Vanderyacht, who grew alfalfa, wheat and peas.

“I wasn’t planning on staying more than the summer, but I worked for him five to six years and learned a lot about farming in this climate,” Lucy, now 49, says.

Vanderyacht died several years ago. Lucy still farms some of the same ground he did.

Brooke Parlette, 43, grew up in Wenatchee, the daughter of well-known attorney Bob Parlette and step-daughter of state Sen. Linda Evans Parlette. She received her master’s degree in educational psychology from Heritage University in Toppenish and taught school in Arizona before returning to Washington.

It was the big winter of 1996. Winthrop had 5 feet of snow. But in October, before the snow hit, Brooke had moved to Winthrop to house sit. She met Sam while both were walking their dogs on Rendezvous Road. It was within sight of where their Bluebird granary stands today.

“The natural world has been our thread,” she says.

They married a couple of years later and Sam started a land restoration business about the time the first of their two daughters was born.

People from out of the area were buying 20-acre parcels in the upper Methow and building second homes. They wanted their acreage kept in a natural state and some of them needed some agricultural production to maintain their water rights.

Lucy found grains, particularly spring rye, kept weeds down and gave him a product to sell. He bought an old combine, kept his crops strictly organic and sold wholesale wheat and barley.

By 2003, they were processing some of their grain for local markets and an acquaintance asked them to grow some emmer for him for seed.

“When Sam started growing it, we started researching its potential and realized it had a spectrum of uses in Europe and was not being used in the states,” Brooke says. “Pasta, beer, soup, whole grain. It had an amazing marketplace there. Why couldn’t we do the same thing here?”

They started selling to chefs in Seattle who were getting semi-pearled emmer from Italy. It was dehulled and the outer layer of the grain was shaved, which takes away nutrients. It doesn’t hold up well. The chefs liked the Lucys whole grain emmer for its flavor and integrity after it is cooked.

The Lucys planted more emmer and in 2005 started Bluebird Grain Farms, named for the bluebirds that appear in the Methow Valley during spring planting and leave during fall harvest.

“Bluebirds are a reminder that every single thing we do as farmers is connected to and impacts the environment at large. We believe that nutritious food produced from nature is the cornerstone of a healthy community,” the Lucys wrote on their website.

Today, they lease 230 irrigated acres on which they grow about 10,000 bushels of organic grains. Some 80 percent of it is emmer. They grow an ancient winter rye and einkorn, a parent of emmer. Their non-ancient grains are hard white and red spring wheats for local bakeries.

They grow their own emmer seed, which they first got from a research seed bank in Rwanda.

Emmer grows taller than modern wheat, up to four feet tall, has longer beards and tends to lodge, that is, fall over on its stalks. Residual straw, so much more of it than with shorter, modern wheat hybrids, was generally considered a negative, but Lucy tills it into his soil and views it as a plus.

“Emmer is amazingly resilient to rain and weather,” he says. “It sheds a lot of water.”

The grain is stored mostly in wood silos, designed like Old World granaries, to absorb any moisture from the grain and condition it for use.

It is removed from the silos as needed throughout the year to fill orders. It is dehulled, screened and graded and sold as whole grain or flour.

The Lucys’ daughters, Larkin, 13, and Mariah, 10, help in the business, and there are five employees.

Products generally sell through the Bluebird online store at $3 per pound and include cereal, pancake and waffle mixes, and flour for baking cookies, muffins, breads and wide-noodle pasta. Whole grain packets are promoted for salads, pilafs, soups, risottos and partnered with braised meats and roasted vegetables.

About 60 percent of sales are in Washington state, mostly the Seattle area, with Oregon and California accounting for most of the rest and lesser amounts in Colorado and New York.

The Lucys get calls from people wanting mass volumes and have struggled with whether to go larger.

“I think we are on top of the short list when people are looking for emmer,” Sam says.

“If bigger players came onboard their issue would be organic processing. Financially, I doubt if there would be enough incentive for them,” Brooke says.

The Lucys’ commitment to what they do is philosophical — a belief that growing healthful food is the ethical thing to do.

“Ultimately our goal is to produce good clean food for people,” Sam says.

“There’s a whole body of people,” Brooke says, “who think grains are not good for you. Gluten-free has affected the market, but for us mostly positive because emmer has so little and einkorn even less. We don’t push them as gluten-free but nutrient-dense.

“We’ve been geared up so much for industrialized agricultural processes, and now as a society we’re just beginning to rethink our food systems.

“The masses are more aware of food and quality not trusting the industrialized process. That’s why GMO (genetically modified organisms) is a heightened issue.”