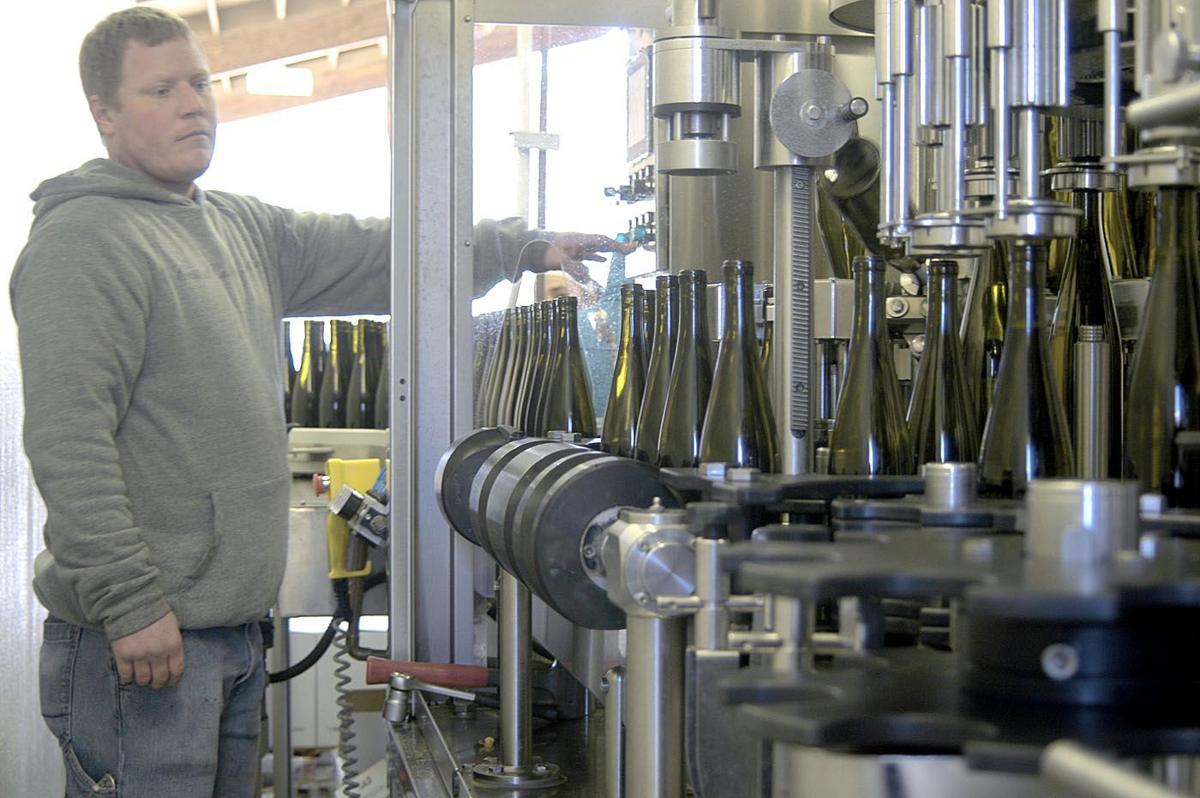 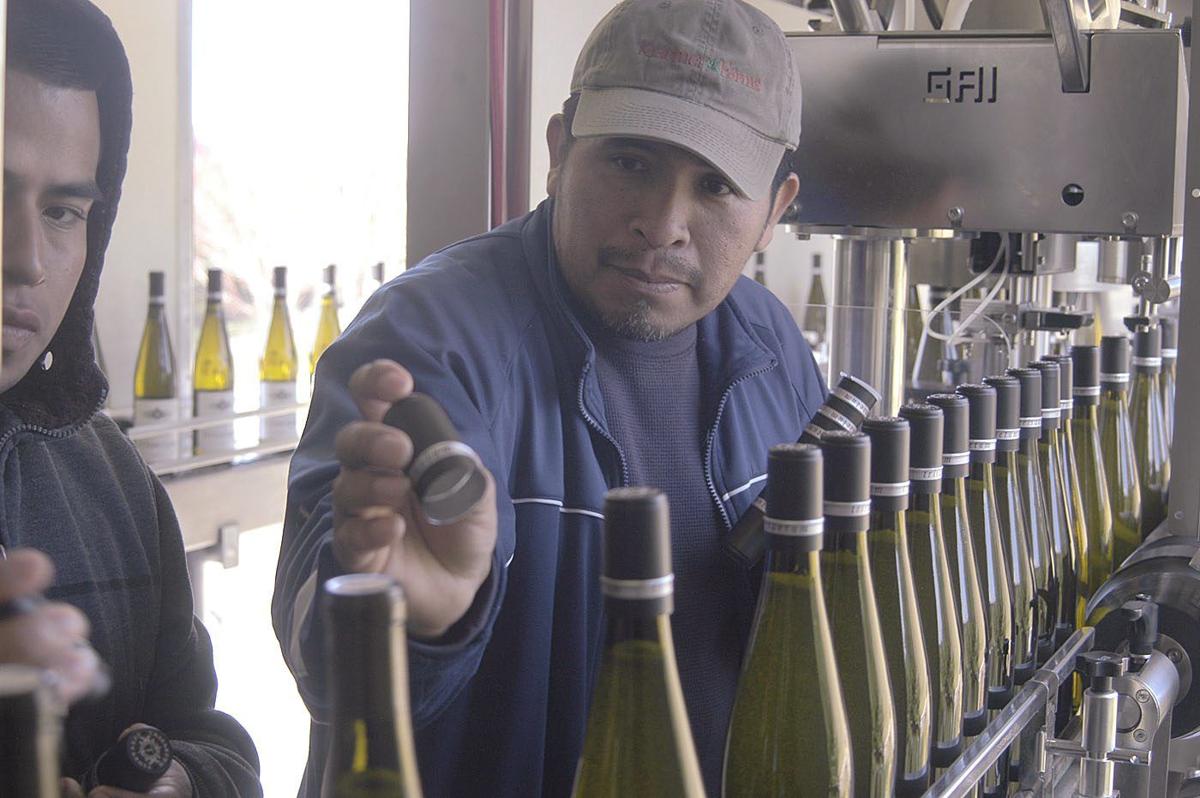 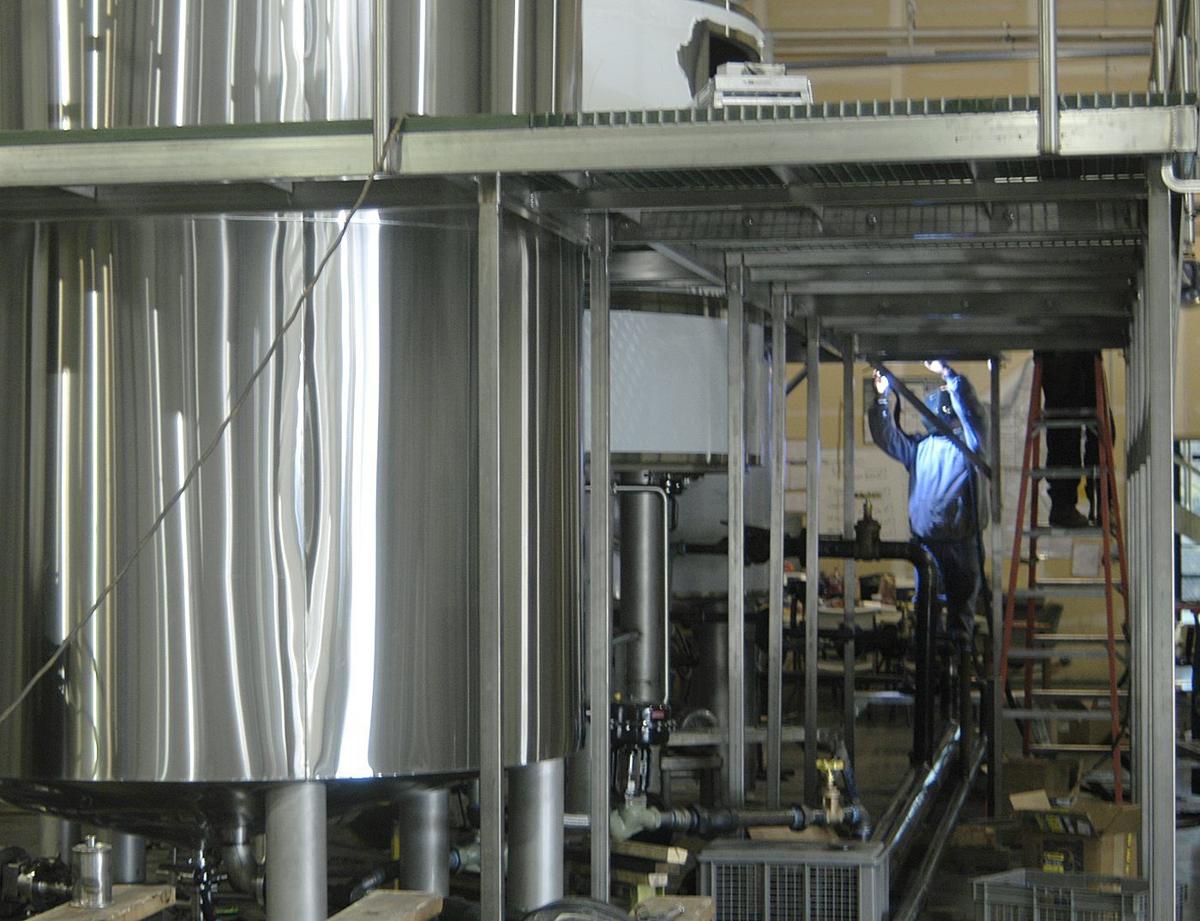 Eric Mortenson/Capital Press A welder at AAA Metal Fabrication in The Dalles works on fermentation tanks being assembled at the plant. Tank orders from the state's “alcohol cluster” of wineries, breweries and distilleries have increased dramatically. 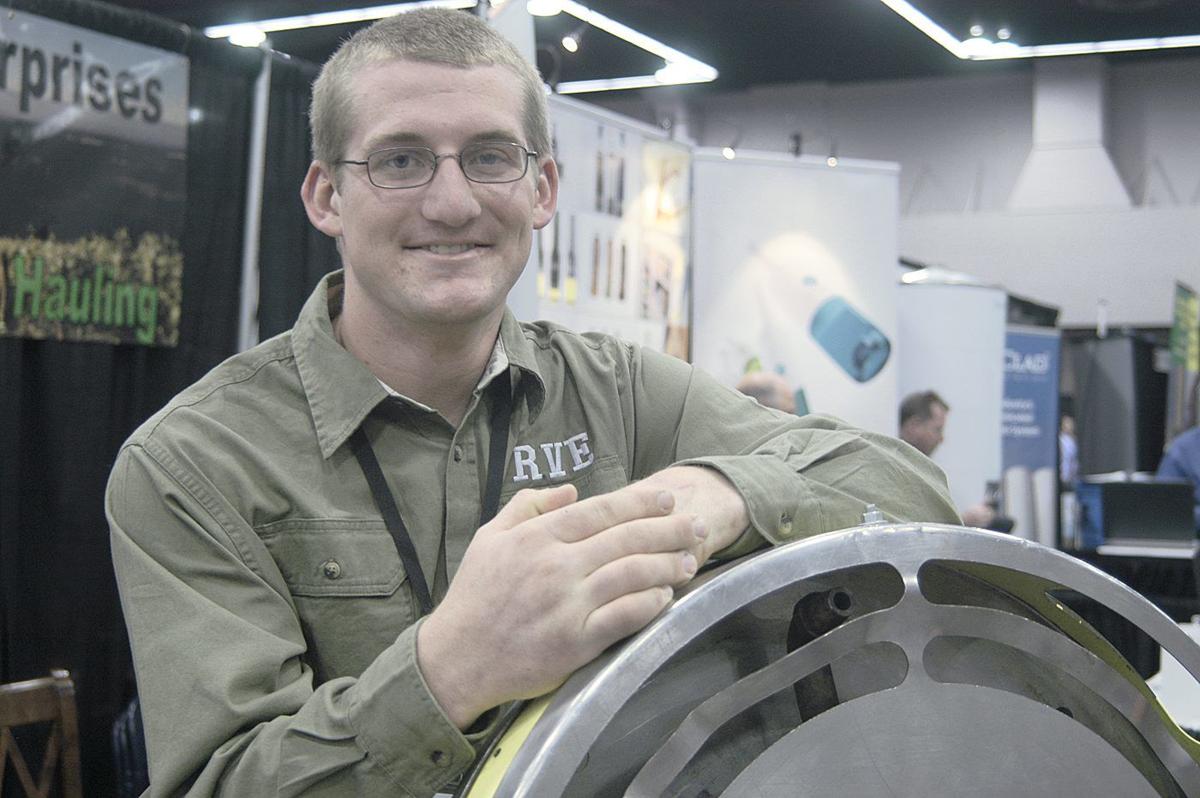 Eric Mortenson/Capital Press Pierre Paradis, an Oregon State University student whose family owns a vineyard, is striking out on his own with a vine hedging, leaf removal and fruit hauling service. 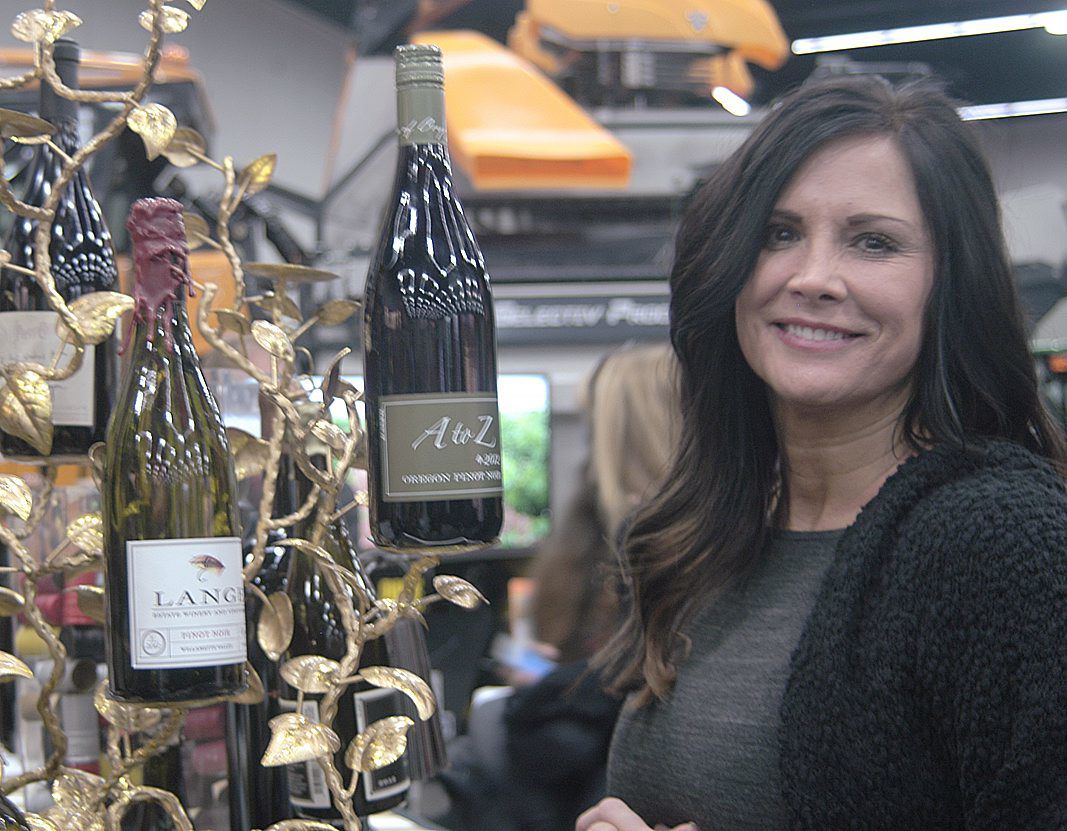 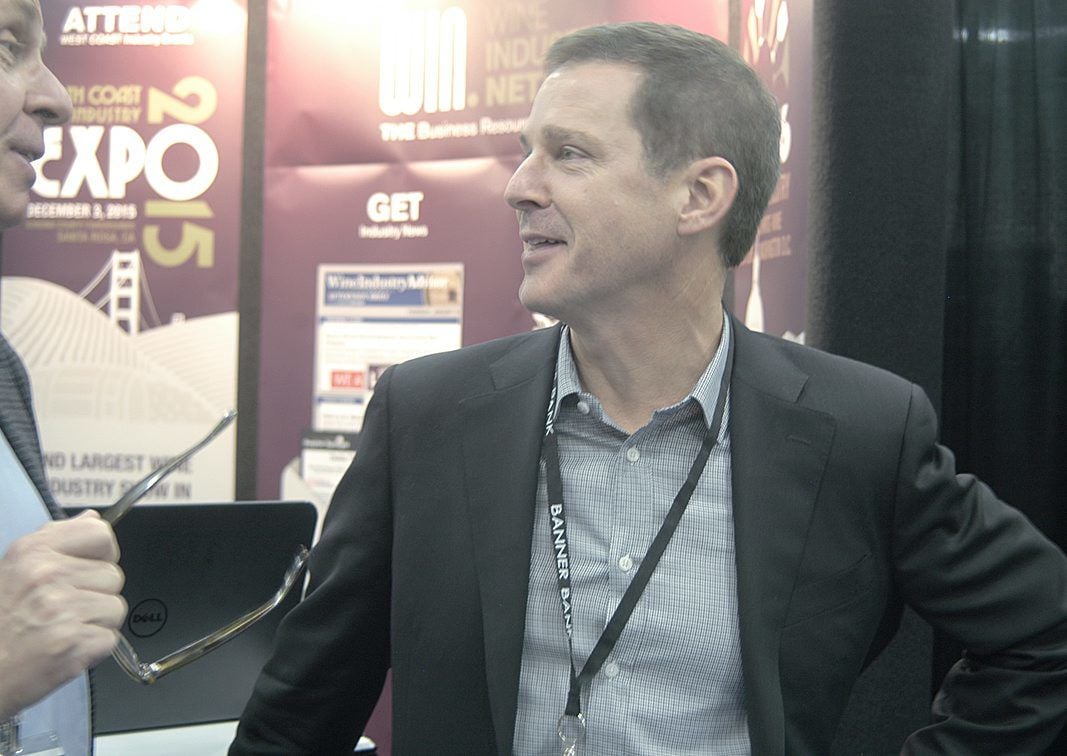 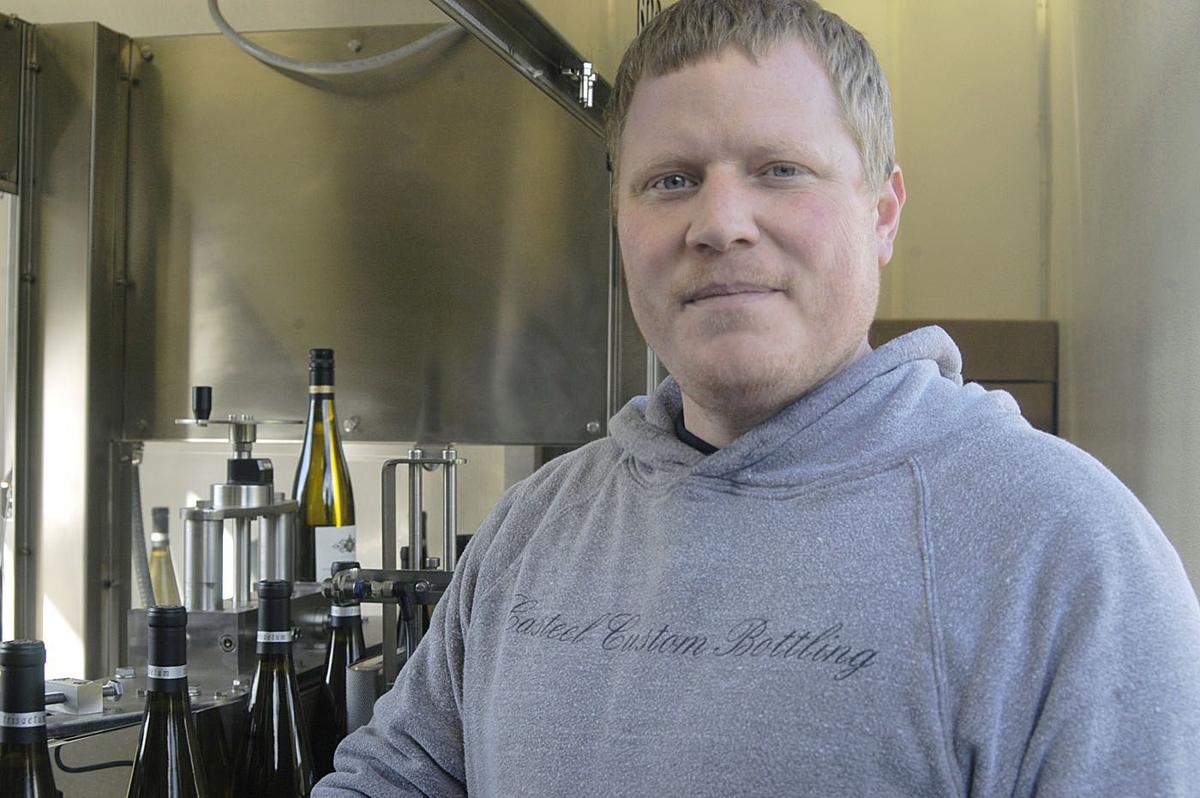 Eric Mortenson/Capital Press Jon Casteel goes from winery to winery in his mobile bottling truck, one of the service businesses that has sprung up to service Oregon's wine industry. 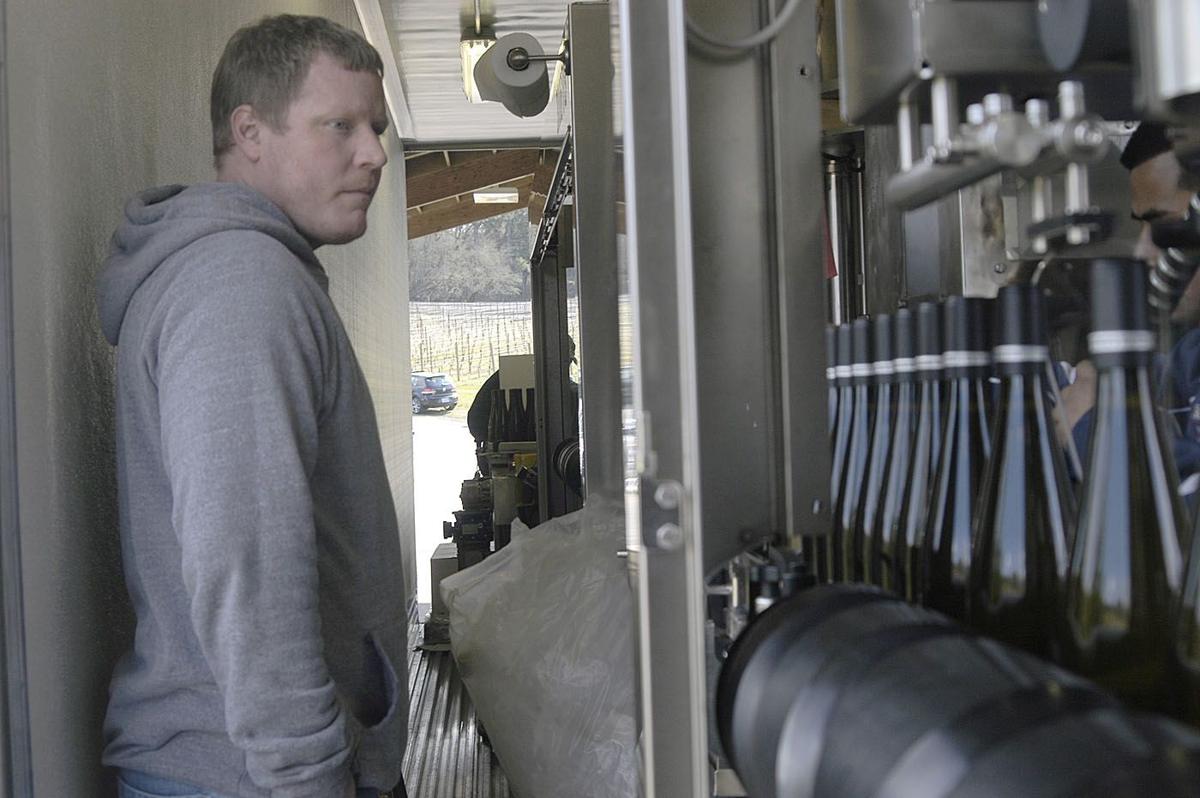 Eric Mortenson/Capital Press A welder at AAA Metal Fabrication in The Dalles works on fermentation tanks being assembled at the plant. Tank orders from the state's “alcohol cluster” of wineries, breweries and distilleries have increased dramatically.

Eric Mortenson/Capital Press Pierre Paradis, an Oregon State University student whose family owns a vineyard, is striking out on his own with a vine hedging, leaf removal and fruit hauling service.

Eric Mortenson/Capital Press Jon Casteel goes from winery to winery in his mobile bottling truck, one of the service businesses that has sprung up to service Oregon's wine industry.

THE DALLES, Ore. — This is a good place to start talking about the rippling impact of Oregon's “alcohol cluster,” as a state economist calls it. Right here, on the welding shop floor of AAA Metal Fabrication with foreman Antonio Morales, where a half-dozen stainless steel fermentation tanks stand in various stages of production.

The Pacific Northwest's booming wineries, joined now by breweries, distilleries and hard cider makers, are clamoring for tanks, and AAA Metal Fab is one of the few places that make them.

“We are not able to meet the demand,” company President Chris Parks says. “It's a nice problem to have, let's put it that way. We see enough coming into production that there's going to be years worth of tanks needing to be built.”

A January report by Full Glass Research estimated the Oregon wine industry alone bought $8.4 million worth of stainless steel tanks in 2013 as it scrambled to process increasingly large harvests.

That means jobs — good ones, with plenty of overtime work — for foreman Morales, his brother, his nephew and other relatives among AAA Metal's 14 to 16 employees. The same Full Glass Research report lists the average annual wage in Oregon's heavy-gauge steel manufacturing sector, which includes firms much larger than AAA Metal, as $56,669.

Welding stainless steel takes skill, and the shiny tanks have to be finished to food-grade quality to prevent bacteria from growing inside. Surprisingly, none of the company's welders has had special training; they all learned on the job.

“All of these guys started from the bottom,” Morales says. “Sweeping floors, cleaning up. They learned by being here.”

Continued expansion and investment by wineries, breweries and distillers has AAA Metal and its workers in a “really good position right now,” Morales says.

The report details an industry that has come of age. Although tiny compared to California and smaller than neighboring Washington, Oregon's vineyards and wineries have carved out a niche that is economically, aesthetically and socially successful.

In an interview after his “state of the industry” presentation at the recent Oregon Wine Symposium in Portland, Miller said the wine industry has a bigger ripple effect in the economy than other agricultural sectors. Wine-related tourism alone — all those cars streaming to tasting rooms off Highway 99W in Yamhill County — pumps $207 million annually into the Oregon economy and employs 2,623 people, Miller said.

All told, Miller counts more than 17,000 wine-related jobs in Oregon and $527 million in wages. Senior state economist Josh Lehner, in a February report, said the number of jobs in wineries, breweries, distilleries and their distributors and retail outlets increased 46 percent since the start of 2008.

By Miller's estimate, the 2013 wine grape crop was worth $128 million and became the most valuable of Oregon's fruit and nut crops, passing hazelnuts, blueberries, pears, cherries and other stalwarts. The National Agricultural Statistics Service had grapes in second that year with $107 million value, behind hazelnuts, but the giant grape harvest of 2014 may have reconciled any differences.

At any rate, the value of Oregon's wine grape crop has quadrupled since 2004, Miller said. The average price per ton paid for Oregon grapes in 2013 was $2,249, far more than the $713 per ton average paid to California growers and $1,110 paid to Washington growers. Only California's Napa County had a higher price per ton, $3,683. The discrepancy with California's average price is due to the large volume of lower-quality grapes grown in the Central Valley, according to the report. Those grapes are used in “low-value uses” such as concentrate, according to the report.

The price is another distinguishing feature of the Oregon wine industry, Miller said: It started by focusing on high-value, high-quality wine, particularly Pinot noir, and has stayed that way.

By all accounts, the industry's founding fathers and mothers were and are quirky, driven people who collaborated in order to survive. The people who followed them include many who were accomplished in other fields, are highly educated and brought resources with them. Grape growing and wine making is a marriage of science and art, and its practitioners tend to be hard chargers.

It's fair to say some of Oregon's traditional, conventional farmers believe the wine industry distances itself from them; vineyard producers are not particularly engaged in the Oregon Farm Bureau, for example.

Other farmers can't help but notice the attention and money flowing to the wine industry, and frankly worry it will bend legislation its way as well. This past year, a couple vineyard operators loudly complained that spray drift from grass seed or Christmas tree operations was damaging grape vines. Traditional farmers resent the issue being taken public rather than worked out among farmers, as is usually done in Oregon.

The industry's growing clout has a number of markers:

A law firm, Stoel Rives LLP, has a wine practice group spread among its dozen Western offices. The founding chair is Christopher Hermann, of the Portland office, who flat out says vineyards and wineries have transformed rural communities and been a catalyst of economic development “up and down the Willamette Valley” and throughout the state. He also credits the industry with touching off Oregon's local food movement, including fine restaurants and branching into craft beer breweries and spirits. “Wineries led the way,” he says.

Silicon Valley Bank has a 30-member “wine division” in its West Coast offices, works with about 350 vineyards and wineries and counts an estimated $1 billion in committed loans to the industry, says Mark Freund, managing director of the bank's Beaverton, Ore., office.

Oregon State University started its Wine Research Institute in 2009 at the industry's behest — and with $2 million in industry seed money.

Oregon now has accounting firms and real estate companies that specialize in vineyards and wineries. Other businesses that have sprung up in support of the industry range from custom crush or filtration companies to ones that use falcons to chase pest birds from vineyards.

In 2013, according to Miller's Full Glass Research, the industry spent $21.9 million for bottles, $11.5 million for corks, screwtops and other closures, $5 million to $7 million on oak barrels and bought 37 million labels worth an estimated $10.4 million. Of the latter, 84 percent went to Oregon firms.

Carrie Higgins, who founded Crush Creative Packaging of Lake Oswego in 2005, has seen her labeling business grow with the industry. One of her early clients was A to Z Wineworks, which in its infancy wanted 5,000 labels for a modest Pinot noir offering. Now Higgins sells A to Z 4 million to 5 million labels a year, and the winery itself has grown to be one of the state's largest. In 2006, partnering with San Antonio Spurs Coach Greg Popovich, A to Z bought Rex Hill Vineyard and Winery in Newberg.

“It's very circular growth, is what I would call it,” Higgins says. “I never thought I'd grow up and sell wine labels. It's a very niche market.”

Miller says the industry has room to grow. Oregon produces no glass or corks, he says, ticking off some of the opportunities, and there's only one oak barrel manufacturer in the Pacific Northwest.

Varietal expansion is likely as well, Miller says. While Oregon is best known for Pinot noir wine produced in the Willamette Valley, and Pinot noir grapes make up 67 percent of the total wine grape crop value, the Pinot gris wine coming out of Southern Oregon is under-appreciated, Miller says.

“I don't see it bumping into a ceiling any time soon,” he says.

US says it will block palm oil from large Malaysian producer