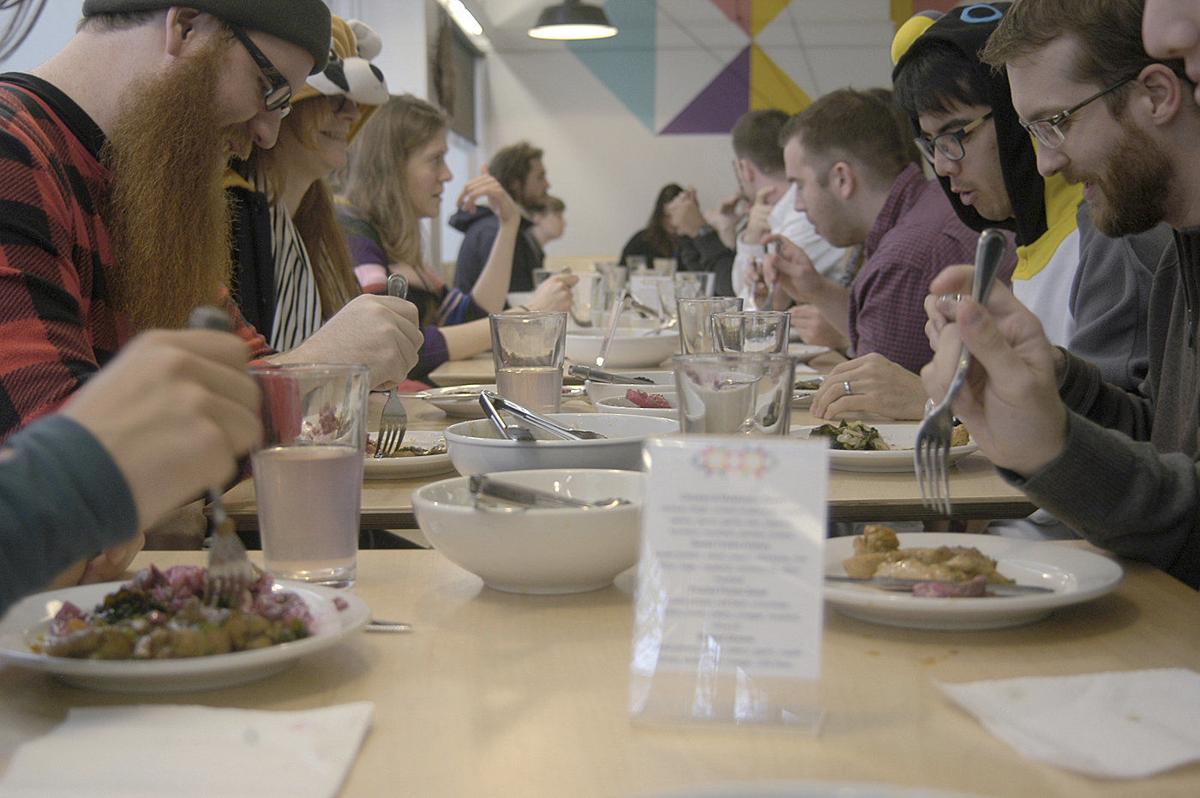 AirBNB employees enjoy a free lunch of locally sourced food at the company's private restaurant in downtown Portland. The company, which employs 400 people at a nearby call center, provides free breakfast, lunch and all-day snacks to its workers, and buys from local farmers and processors when possible. 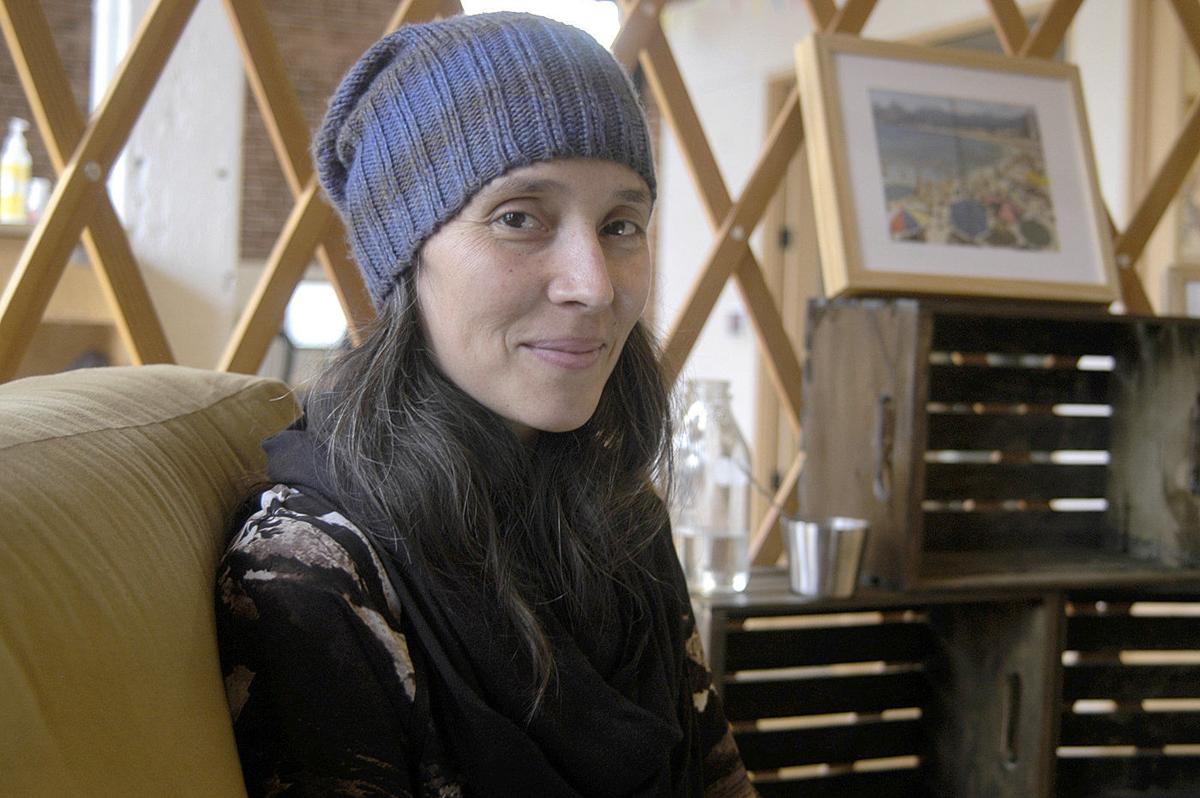 James Evans Harvey, having a lunch with laptop moment in a yurt at AirBNB's call center in downtown Portland, said the fresh, locally sourced food fed free to her and other workers is “profoundly important” to her health and has a ripple effect of making employees feel better about their job. 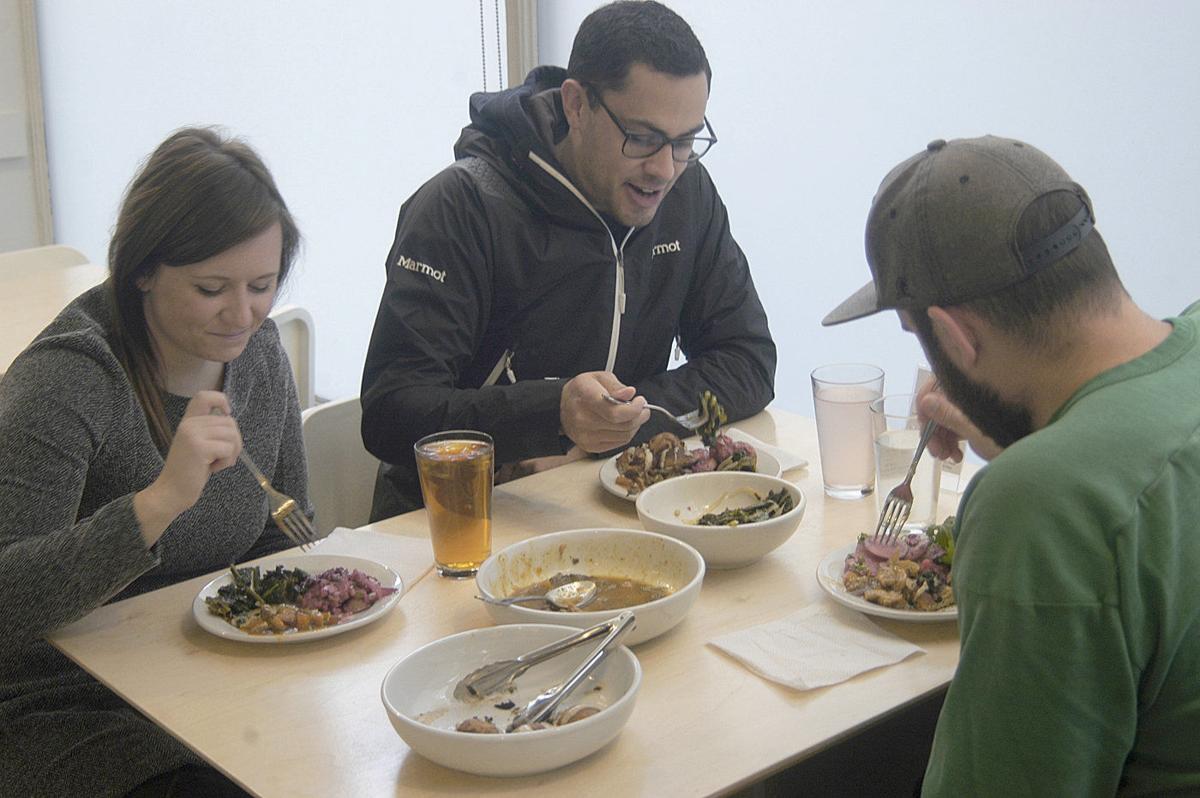 AirBNB employees enjoy a free lunch of locally sourced food at the company's private restaurant in downtown Portland. The company, which employs 400 people at a nearby call center, provides free breakfast, lunch and all-day snacks to its workers, and buys from local farmers and processors when possible.

James Evans Harvey, having a lunch with laptop moment in a yurt at AirBNB's call center in downtown Portland, said the fresh, locally sourced food fed free to her and other workers is “profoundly important” to her health and has a ripple effect of making employees feel better about their job.

PORTLAND — For the record, it is possible to find a job where you do your work while sitting in a yurt with a laptop and a sandwich. The yurt, it should be said, is on the third floor of a 100-year-old building in Portland’s Old Town, where street people provide rambling commentary and futilely shake parking pay stations for loose change.

Inside the old building, up to 400 employees of AirBNB, the international online vacation rental hub whose other offices are in San Francisco and Dublin, Ireland, take calls and emails from all around the world while perched in cubby holes, arranged in themed mini-offices or, yes, occupying the yurt.

But let’s talk about the sandwich.

The greens are from Portland’s Sauvie Island Organics. The ham is from Olympia Provisions, also of Portland, and the chutney was made in-house by AirBNB’s food team. The bread is from Pirate Bread, a North Portland startup.

All of which is intentional. AirBNB provides free breakfast, lunch and all-day snacks to its call center workers five days a week. As much as possible — bananas, orange juice, coffee and chocolate are among the few exceptions — the food is locally sourced. The baked kabocha squash? From Sauvie Island again. The portabella mushrooms? From Hood River, Ore. The maple-cashew-miso cream cheese? Made in-house. Craft beer and wine are available after work shifts, beginning at 5 p.m.

That’s just the casual soup, salad and sandwich bar. Four blocks away, behind an unmarked door along busy Burnside Street, AirBNB operates a full-blown restaurant for its employees. They’re encouraged to take a walk, grab a table and eat family style from shared platters. Again, free.

The employees, of course, eat it up.

Darcy Boles said free, healthy food is an “added, incredible bonus.” Her lunch table mate, Jeralyn Fix, said it’s the best perk of the job. The relaxed work atmosphere is somewhat like home, she said, and she feels free to get up and get a bowl of cereal anytime she likes.

Then there is James Evans Harvey, who on a recent day found a couch in the yurt to her liking. Evans Harvey worked one season for a CSA farmer and gained an appreciation for local food.

“I’m a new mom,” she said, “and for me it’s profoundly important to know the food going into my body and my baby’s body was grown, produced and made with a whole lot of love.”

AirBNB’s food service has a ripple effect, she said. The way she and other call takers interact with customers is “impacted by the way we’re treated here.” The work is “greatly enhanced by feeling we are home.”

The bigger ripple effect may be in the regional food system, especially among small producers and processors who operate relatively close to urban areas.

Kristin Arychuk, AirBNB’s culinary product and vendor lead in Portland, seeks out local farms and processors that can supply the greens, grains and finished goods needed to feed workers. She finds leads at farmers’ markets, looking for partners to provide ingredients and food that is seasonal and sustainable. AirBNB’s corporate culture encourages support of the local economy, she said.

“One of my main emphases is to make sure we ethically and wisely spend our money,” Arychuk said.

It’s a job that requires menu flexibility. “Yes we plan but no we don’t,” Arychuk said. “It’s dictated by what is great right now.”

The Portland center stresses sustainability in other ways as well. It eliminated canned beverages and the food team makes many drinks in-house. It employs re-usable totes, and snacks are delivered in bulk to avoid packaging. Leftover food is re-purposed, if possible, or donated to area missions that feed the homeless. “I feel pretty good about our waste structure,” Arychuk said.

Corporate cafes apparently started as a perk offered by high-tech firms that were competing for talented employees. A 2014 article online at Business Insider said Google had become the “gold standard of dining in Silicon Valley” by operating more than 30 free cafes for the estimated 20,000 employees at its headquarters in Mountain View, Calif. Each cafe focused on using local ingredients, according to the article.

Big buyers such as AirBNB have the power to change the nature of the food system, said Amanda Oborne, vice president of food and farms for Ecotrust, a Portland nonprofit. Oborne was lead author of a report that examined how small to mid-size farms and processors can find success in Oregon’s regional food systems. The report noted that institutions such as schools, hospitals, care centers and jails serve 40 million meals annually, and that “ag of the middle” producers could find expanded markets if they can solve some transportation, warehousing, cold storage and aggregation problems.

Corporate cafes such as AirBNB’s have more money to spend than public institutions, and likewise can have a big impact by seeking out locally produced food and ingredients and “really putting their money where their mouth is,” Oborne said.

AirBNB’s action in Portland is a significant commitment to sourcing within the region, she said.

Buying from local producers requires give-and-take from both sides, she said. Corporate cafes have to work harder and be more flexible to find everything they need, and accept the seasonal ups and downs of supplies. For their part, small farmers and processors accustomed to being paid on delivery have to realize their payment will be delayed as it cycles through a company’s accounting system.

“There isn’t any way around it,” Oborne said. “They get paid, but not that day or the next day, but a couple weeks down the road.”

Employee Phil Davis said he’s paid less at AirBNB than at a previous job, but the food helps bridge the gap.

“It’s like a hidden benefit in your paycheck,” he said.