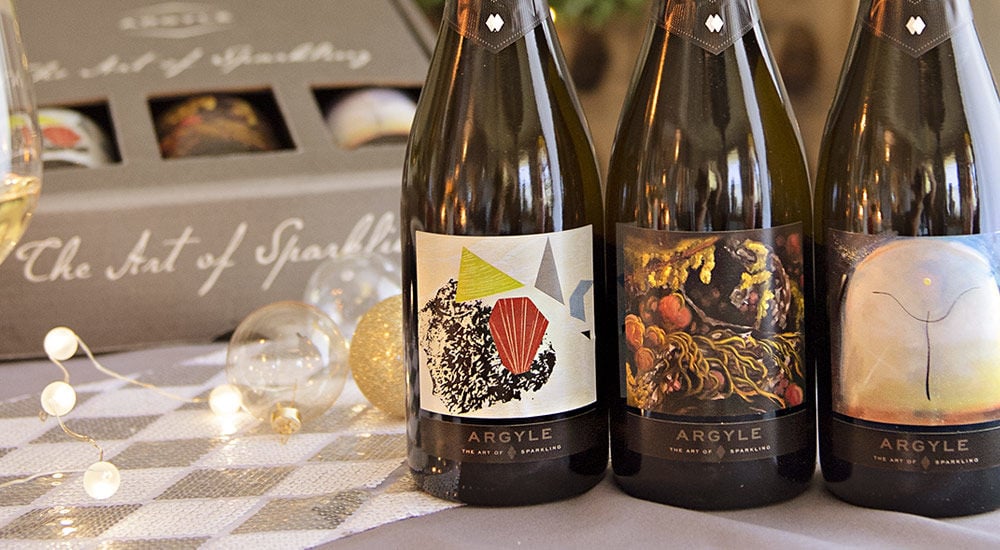 The work of scholarship winners from the Pacific Northwest College of Art in Portland appears on labels for Argyle Winery’s “The Art of Sparkling” wines. 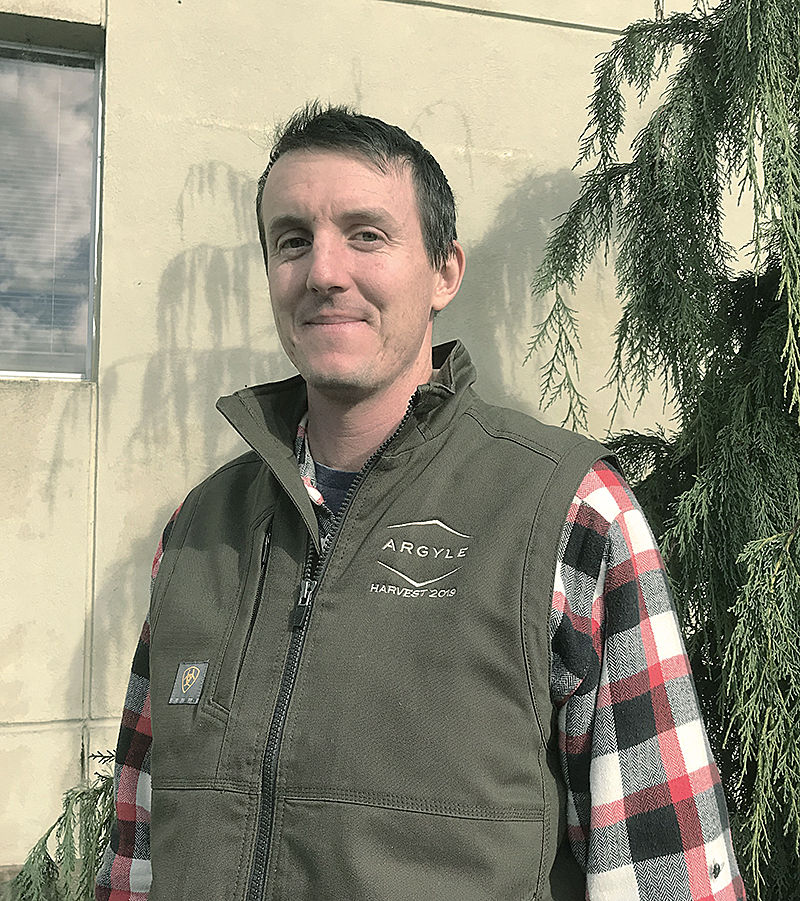 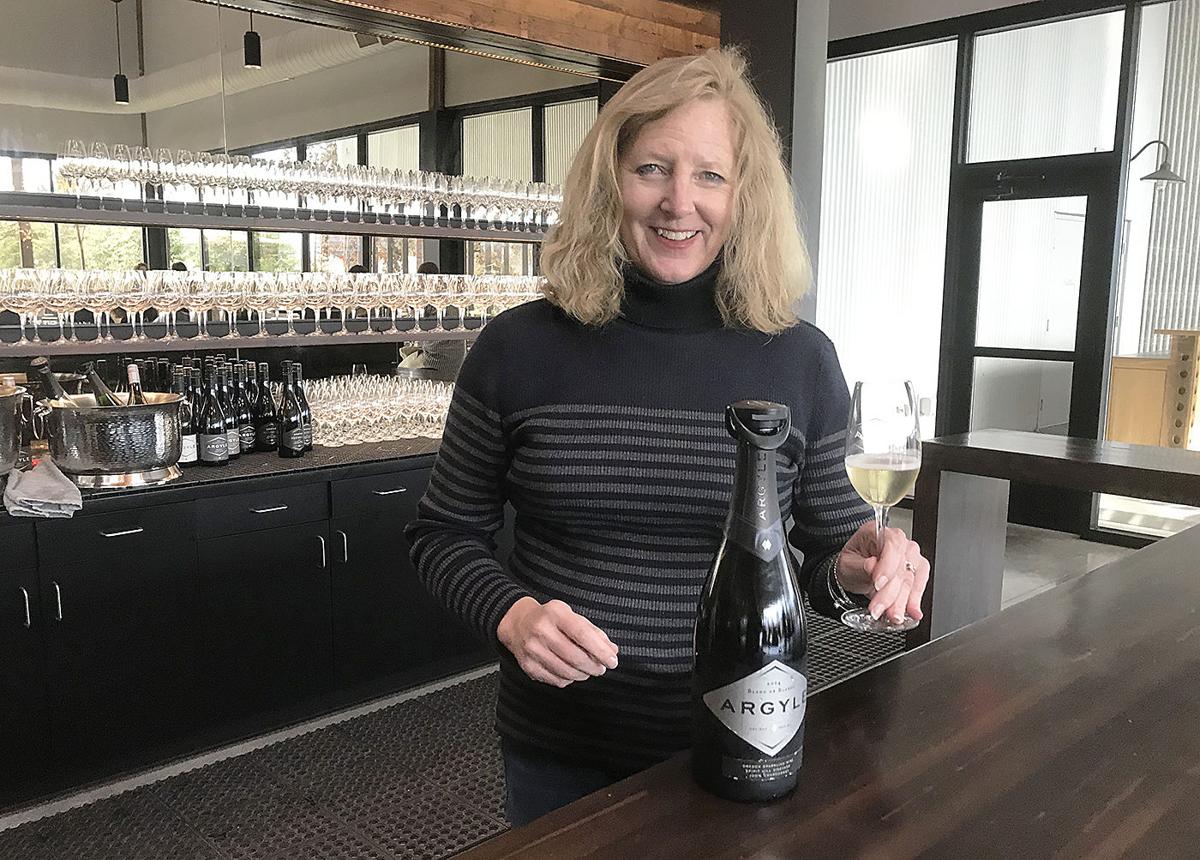 The work of scholarship winners from the Pacific Northwest College of Art in Portland appears on labels for Argyle Winery’s “The Art of Sparkling” wines.

DUNDEE, Ore. — Though the design of a wine label is considered a key element of its appeal to consumers, the Argyle winery doesn’t mind experimenting sometimes.

Each year, the company awards three scholarships to art students who then spend a day “immersed” in its vineyard, winery and tasting room operations in Oregon’s Yamhill County, inspiring each to design a wine label that captures the “essence” of Argyle.

“It’s the same information going in and it comes out in all these different directions,” said Cathy Martin, the company’s marketing coordinator. “We’d like to see how they’d interpret Argyle.”

The art students are selected from applicants attending the Pacific Northwest College of Art in Portland based on their previous work, but the winery gives them free rein to design the labels on their own.

“We never know what we’re getting for the artwork,” Martin said.

The unique process can sometimes take the winery “outside of its comfort zone,” but each label is affixed to bottles of Argyle’s Vintage Brut sparkling wine and the three-bottle packages are featured in its yearly holiday catalog, she said.

“We do a lot of promotion about it,” Martin said.

The “Art of Sparkling” program, now in its fourth year, is an example of Argyle’s collaborative approach to winemaking, which also extends to its 375 acres of vineyards.

To invest its work crew supervisors in the winemaking process, the company allows them to independently manage specific areas of the vineyard that they’ve identified as producing unique grapes, said Geoff Hall, Argyle’s vineyard manager.

The idea is to isolate and separately ferment wines from those special “pockets,” blending them into finished products according to their individual properties, he said.

“We’re using their innate knowledge of the vineyards to get the best of these vineyards,” Hall said. “They care a lot more. You see it in their enthusiasm for the vineyards.”

This year, Argyle has cooperated with the USDA’s Natural Resources Conservation Service and the Yamhill Soil and Water Conservation District to begin expanding pollinator-friendly habitat at its vineyards.

More than 3 acres were planted with seven different types of wildflower mixes that are intended to boost pollinator populations while being resilient enough to withstand machinery and vineyard operations.

“We don’t want to guess what we should be putting in over the next few years, so we went to the experts,” Hall said of the collaboration with government agencies.

Once the company learns which “islands” of wildflowers are most effective, it plans to expand the project to include more land, he said.

“When we know what’s working or not working, that’s when we scale it,” Hall said.

Aside from being “the right thing to do,” enhancing pollinator activity at Argyle’s vineyards is intended to create an overall better environment that’s conducive to beneficial predatory insects that consume pests.

“It’s our way of getting more diversity into the vineyard,” Hall said.

This same approach of scaling up is being used to explore no-till practices in the vineyards with an eye for improving soil health.

While reduced tillage creates more competition for water and nutrients for Argyle’s grapevines, it increases mycorrhizal fungi in the ground that can unlock nutrients not otherwise available to the plants.

Planting clover and other legumes between the rows discourages weeds while fixing nitrogen that can be released when those cover crops are mowed or eventually plowed under.

“With more diverse cover crops, we hope to have more diverse microbiology in our soil and be less dependent on chemical fertilizers,” Hall said. “That’s the direction we’re going to incrementally increase the acreage we don’t till.”

Founded in 1987 by a group of investors and eventually taken over by the Australia-based Lion food and beverage company, Argyle is among the “second wave” of wineries to locate in Oregon’s Willamette Valley, said Martin.

The company was started with the idea of producing both sparkling and still wines, which provides it with flexibility depending on a particular season’s temperatures and weather, she said.

In warmer years, the higher sugar content within the grapes is preferable for traditional still Pinot noir and other varietals. In cooler years, more of the grapes can be dedicated to sparkling wine.

“You actually harvest the grapes earlier,” Martin said. “You don’t want them as ripe as with still wine.”

Operations: 375 acres of vineyards in Oregon’s Yamhill County, a tasting room in Dundee, Ore., and a winery in Newberg, Ore.

Production: 80,000 cases a year of sparkling and still wines