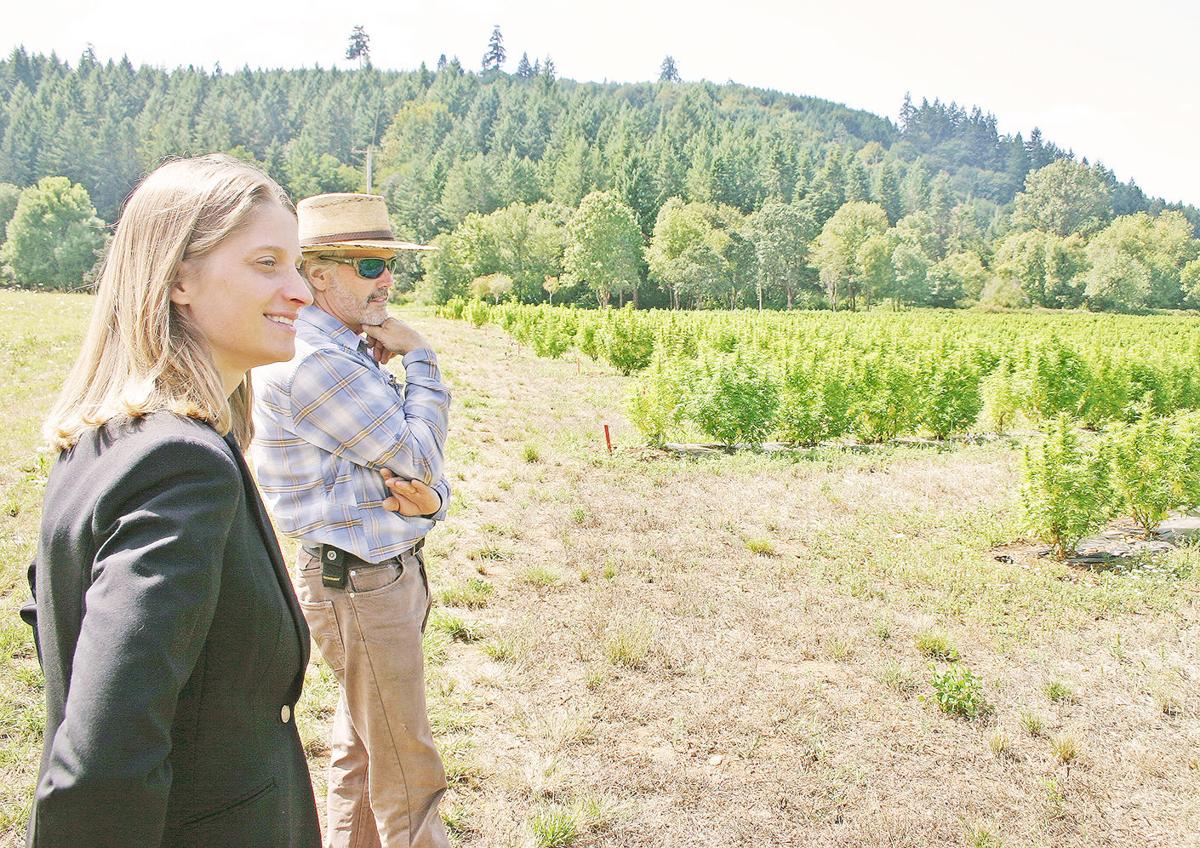 Courtney Moran is a Portland attorney and president of the Oregon Industrial Hemp Farmers Association. She recently paid a visit to Whole Circle Farms near Silverton, Ore., and co-owner Peter Koch. 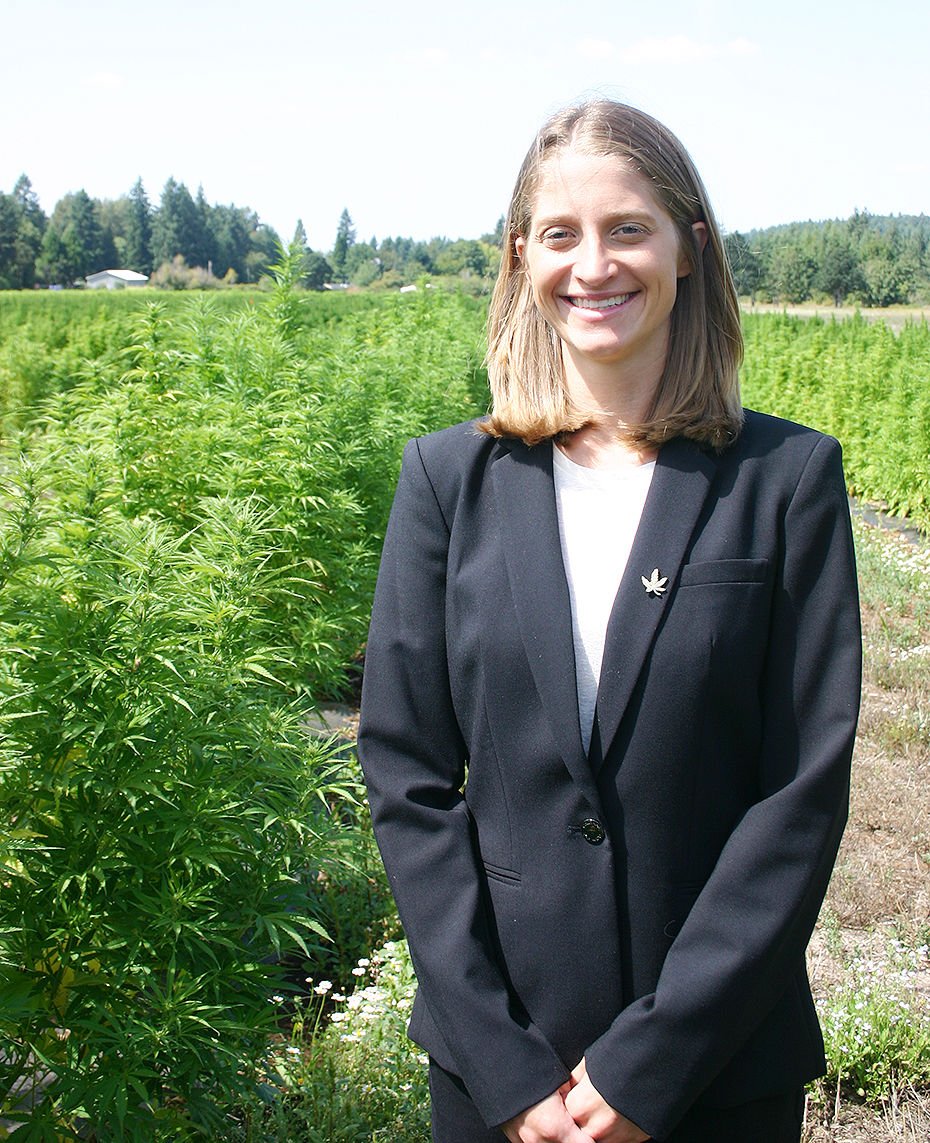 SILVERTON, Ore. — Walking between neat rows of hemp in the lush Willamette Valley countryside, Courtney Moran paused to reflect on what has been a banner year in Oregon for the crop.

One industry forecast by New Frontier Data predicts U.S. hemp sales will reach $2.6 billion by 2022, on par economically with agricultural commodities such as strawberries and pistachios.

Moran, a Portland attorney and president of the Oregon Industrial Hemp Farmers Association, has been at the forefront of advocating new laws and regulations for hemp, bringing order to what has quickly become a gold rush — or “green rush” — for farmers.

With harvest approaching, Moran paid a visit Aug. 22 to Whole Circle Farms in the foothills outside Silverton, Ore., savoring the smell of hemp flowers atop leafy, chest-high plants. As a professional lobbyist, she said this is the fun part of her job.

Farm visits also give Moran the chance to talk with growers about issues they face.

Whole Circle Farms, run by Peter and Rochelle Koch, was one of the first operations to receive its hemp grower’s license from the Oregon Department of Agriculture four years ago. The couple chatted with Moran over a cup of home-brewed hemp tea about finding a bank to serve their business — which remains up in the air even after the crop was legalized.

Moran, 33, founded EARTH Law LLC in 2011 to work out legal issues for farmers and create a foundation on which the hemp industry could thrive.

“This plant grows naturally all over the world, and that’s for a reason,” Moran said. “It can do so many amazing things.”

A native of Wisconsin, Moran attended Marquette University, where she earned her bachelor’s degree in history. She became interested in hemp during her senior year after reading “The Emperor Wears No Clothes,” a pro-cannabis book by Jack Herrer.

“When I read this book and I learned that this plant has been growing for thousands of years, has incredible environmental benefits, can clean up toxins out of our soil, can make thousands of sustainable products, but was illegal to grow in our country. ... It made no sense,” Moran said.

Hemp is closely related to marijuana, though it contains just .3% tetrahydrocannabinol, or THC, the psychoactive component that gets users high. Hemp can be used to make clothing, textiles, paper and building materials, though most of the crop now is cultivated for cannabidiol, or CBD, an extract with multiple claimed benefits.

The federal Controlled Substances Act, signed by President Richard Nixon in 1970, did not differentiate hemp from other types of cannabis and banned all cultivation.

Moran attended law school at the University of St. Thomas in Minneapolis, graduating in 2011. For one summer, she interned at the National Organization for the Reform of Marijuana Laws — or NORML — working on new medical marijuana caregiver laws.

“I figured out very quickly that’s not what I wanted to do,” Moran said. “I wanted to focus on hemp law reform and work with farmers. That was always my goal.”

Moran earned her master of laws degree from Lewis & Clark College in Portland, determined to start a hemp program in Oregon. The state legislature already legalized hemp in 2009, though it was still classified as a Schedule I controlled substance — along with heroin and LSD.

The 2014 Farm Bill finally gave states the authority to regulate hemp, and Moran served on the advisory committee to draft rules for Oregon’s pilot program.

Oregon issued its first industrial hemp license on Feb. 2, 2015. Eleven growers received permits during the first year, nine of whom planted and harvested a crop.

But new challenges quickly arose for the budding industry. Almost immediately, Moran said marijuana growers in Southern Oregon raised concerns about cross-pollination of plants and pushed the 2015 Legislature to impose growing and licensing restrictions on hemp.

Moran testified at hearings and emailed lawmakers incessantly, helping to defeat the proposal on the last day of the session.

“It is what enabled the hemp industry to really start in Oregon,” she said.

In August, the Oregon Department of Agriculture issued a letter stating it would no longer issue licenses for the program. Within 30 minutes, Moran formed the Oregon Industrial Hemp Farmers Association with fellow hemp advocates Cliff Thomason and Jerry Norton to lobby for the industry.

The legislature passed House Bill 4060 during the 2016 short session, which opened the door for any type of hemp cultivation, removed acreage limitations and set up mandatory testing of products.

“That became the most comprehensive hemp bill in the country,” Moran said.

While Oregon’s hemp regulations took shape, Moran was also reaching out to members of the state congressional delegation to begin addressing hemp at the federal level.

Sen. Ron Wyden, D-Ore., had introduced hemp legalization bills since 2012 without getting so much as a hearing. Moran spent days pacing the Capitol in Washington, D.C., knocking on doors and educating staffers about the differences between hemp and marijuana.

“One girl, her jaw just dropped to the floor. She couldn’t believe I even said the word in their office,” Moran said. “So I went back to that office every single day that week until they let me have a meeting.”

With support from an unlikely ally in Senate Majority Leader Mitch McConnell, R-Ky., Congress included the Hemp Farming Act in the 2018 Farm Bill in December, defining hemp as an agricultural commodity and removing it from the list of controlled substances.

As the law takes effect, Moran added the industry is still seeking guidance and clarity from the feds in four main areas.

The first is awaiting new regulations from the USDA, which is expected to finalize its program later this fall — creating federal standards for testing THC levels, inspecting farms and requiring states to track production.

“It’s really about uniformity in regulation,” Moran said. “Right now, we have so many different things going on in different states.”

Second is lingering uncertainty around the transportation of hemp and interstate commerce. Moran said seizures of hemp shipments still happen, and more work is needed to educate law enforcement on how to differentiate between legal hemp and illegal marijuana.

The third issue is banking, as reflected by the ongoing challenges at Whole Circle Farms. Theoretically, Moran said there should be no more restrictions though banks are still being cautious about dealing with hemp businesses.

Wyden and McConnell sent letters earlier this year to four financial institutions urging them not to discriminate against hemp. Moran said it will take time for the industry to adjust.

The last and perhaps murkiest issue is how the Food and Drug Administration will regulate and classify CBD products. The Nielsen market research firm predicts sales of hemp-derived CBD in the U.S. could reach $6 billion by 2025.

The FDA has indicated it could take two to five years to complete its rule-making. Moran said companies and growers are hoping for guidance sooner to avoid stalling potential markets.

Beyond CBD, Moran said she believes investment in fiber and industrial products is “right around the corner,” increasing the potential for hemp to become one of Oregon’s most lucrative cash crops.

“I do think people see the value, and that things are changing,” she said. “That opportunity is really starting right now.”