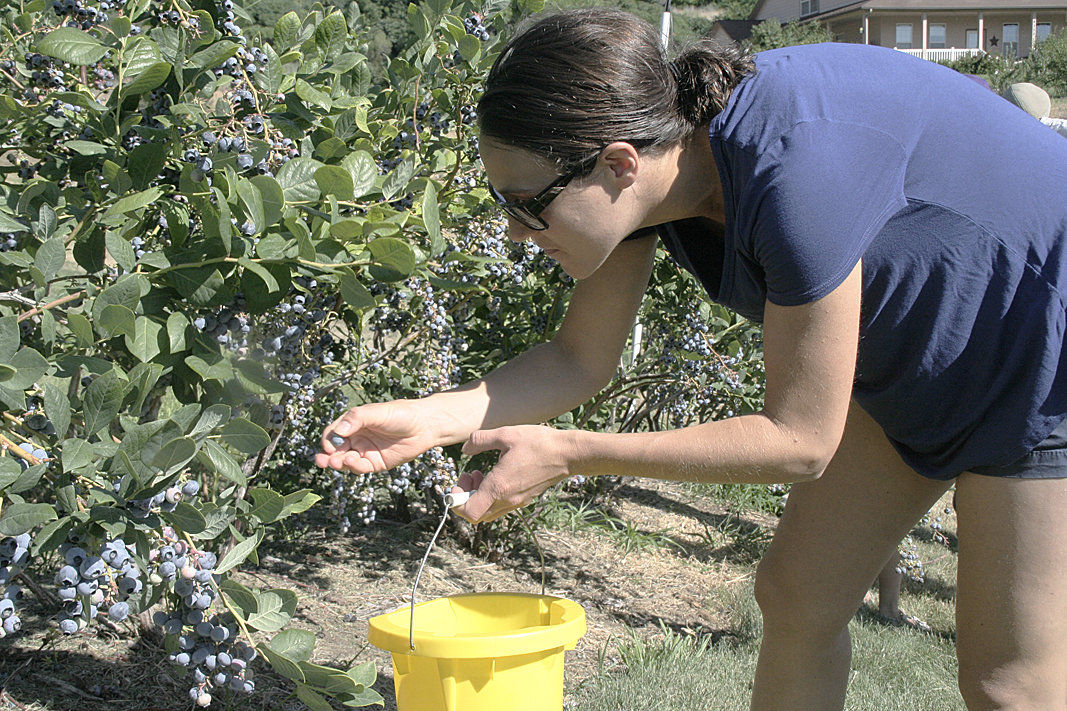 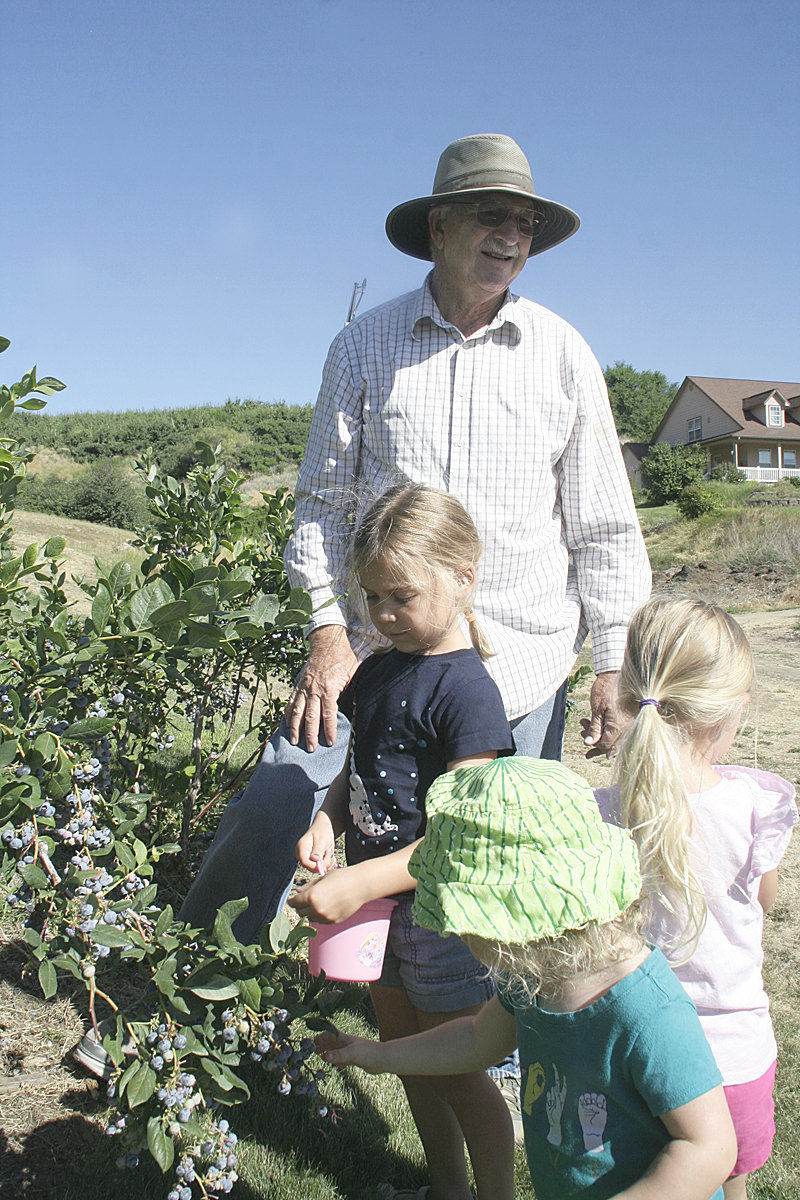 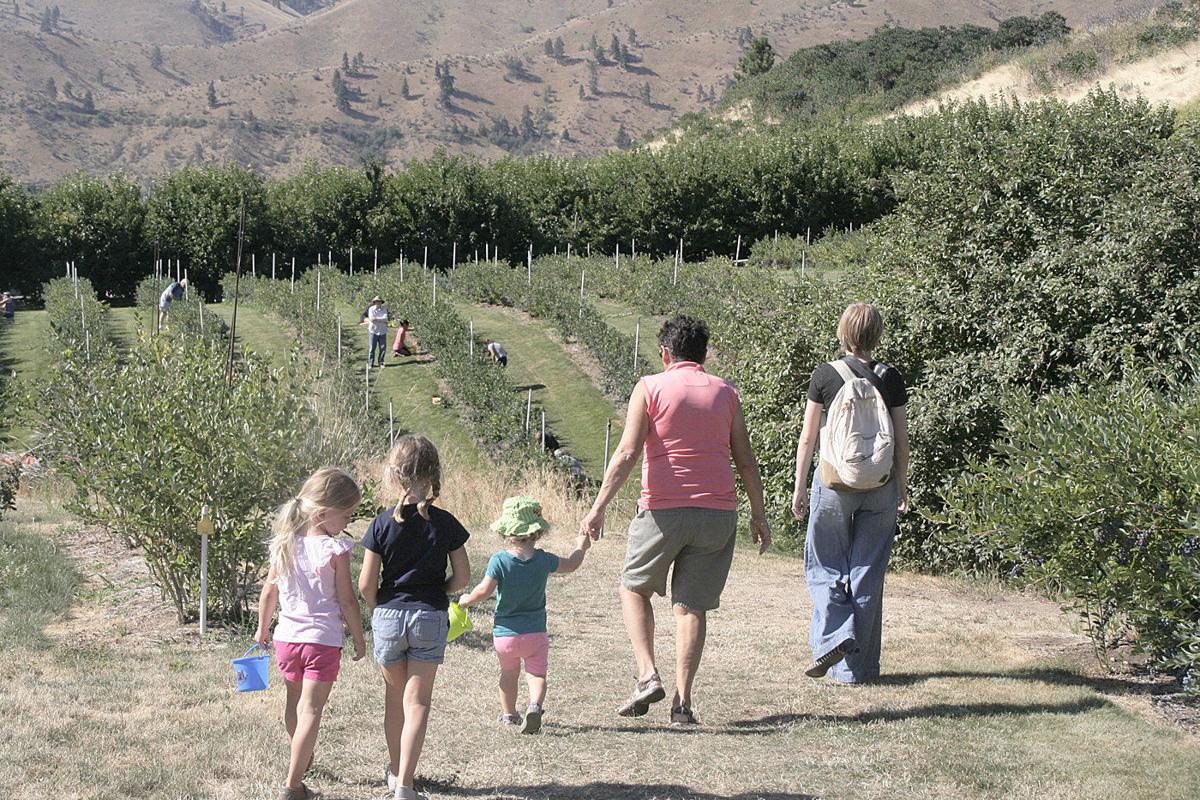 MONITOR, Wash. — It’s a relatively cool 80 degrees at mid-morning as the Kamen and Hanna families head into Crazy Larry’s Blueberry Farm on what will be a 95-degree day.

Owner Larry Rawls demonstrates how to roll blueberries off the bush with his thumbs into his cupped hands.

Jason and Courtney Hanna, of DeKalb, Ill., are visiting his sister, Bridget Kamen, and her husband of Wenatchee. It’s a treat to come pick, Courtney says, because she doesn’t know of any blueberry farms in Illinois.

Rawls’ 1.75-acre U-pick blueberry farm, in Monitor about five miles northwest of Wenatchee, is one end of the spectrum of Washington’s growing blueberry industry. The other end is large commercial producers like Zirkle Fruit Co., Yakima, a tree fruit leader that branched into blueberries.

Consumer awareness of health benefits of blueberries is driving continuing demand, and pushing production in Washington, Oregon, Michigan and Georgia.

Washington surpassed Georgia to become national leader in 2015. Washington held the title in 2016, at 120 million pounds, and is forecast to keep it this year.

Oregon was a close second in 2016 but is expected to place third this year, behind Michigan, said Alan Schreiber, executive director of the Washington State Blueberry Commission in Pasco.

“It’s more accurate to think of Oregon and Washington as a common growing region,” Schreiber said.

The two states are similar in attributes making them a strong force in the industry, he said.

For one, they have a longer production window than most growing regions. Washington picking starts in mid-June and ends in October when the only other region still picking is British Columbia.

Washington has a greater capacity than most states to divert fresh blueberries to processing since its industry began on the west side of the state where disease is greater and it was easier to make money by processing, Schreiber said.

Another benefit is the dry climate of the eastern sides of both states which basically eliminates disease.

Several Oregon fresh packers procure blueberries from Washington, the blueberry commissions of the two states coordinate research and are planning a joint trade mission to Vietnam this fall, Schreiber said.

“Several people on my board have financial ties with Oregon guys. There’s a lot of inter-connectivity,” he said.

It’s not all rosy. Small commercial producers have a hard time competing and one potentially large player, Stemilt Growers, Wenatchee, got in and then got out.

Teri Miller, co-owner of Miller Orchards and fruit stand in Peshastin and a founder of Cascade Farm Lands, an agri-tourism group in the Wenatchee Valley, said blueberries have peaked. Small growers in the valley tried and quit because they couldn’t make enough money, she said.

“Blueberries are very labor intensive and all of ag is short on labor,” she said.

“Economic pressures of scale exist in blueberries like they do in apples and potatoes and wheat. Particularly in the fresh market, it’s hard to be a small, blueberry grower,” Schreiber said.

While Washington’s utilized blueberry production increased 15 percent from 2015 to 2016, its value of utilized production dropped 36 percent from $146.8 million to $94 million, according to USDA’s National Agricultural Statistics Service.

More than half of Oregon voters have cast ballots