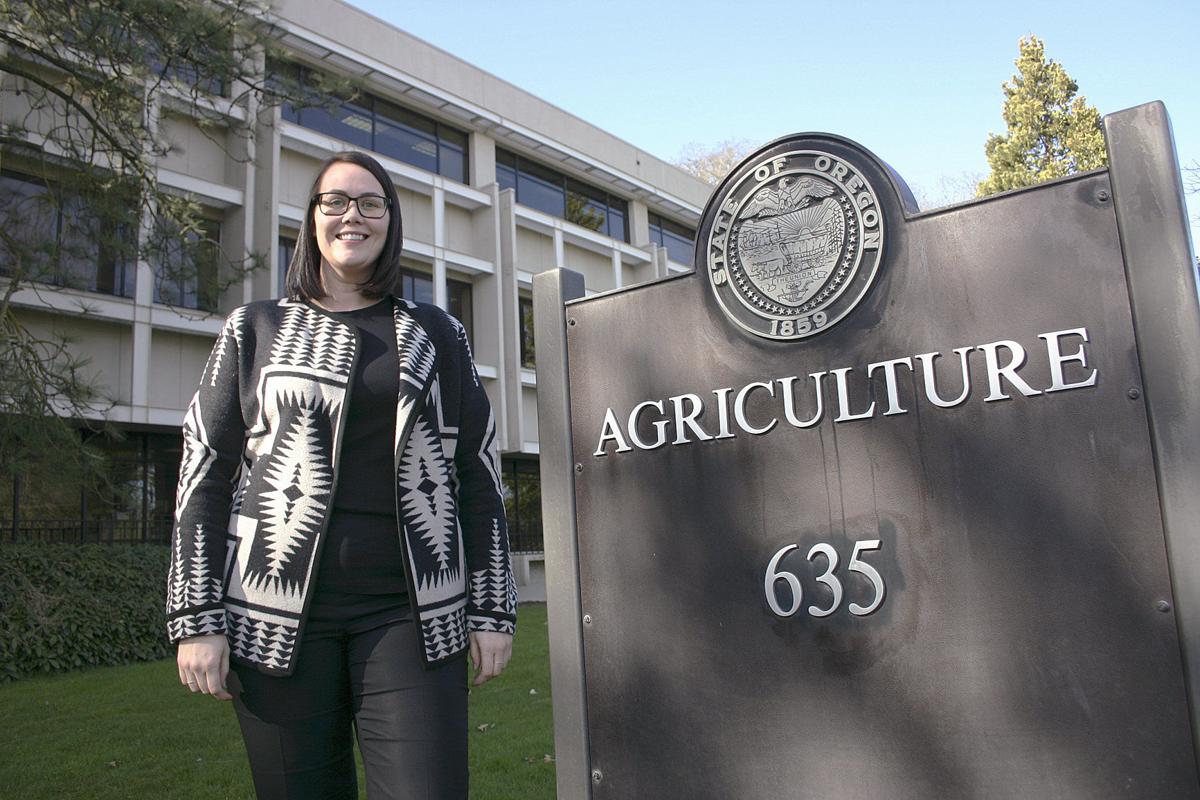 Alexis Taylor, director of the Oregon Department of Agriculture, marked her one-year anniversary on the job Jan. 23. 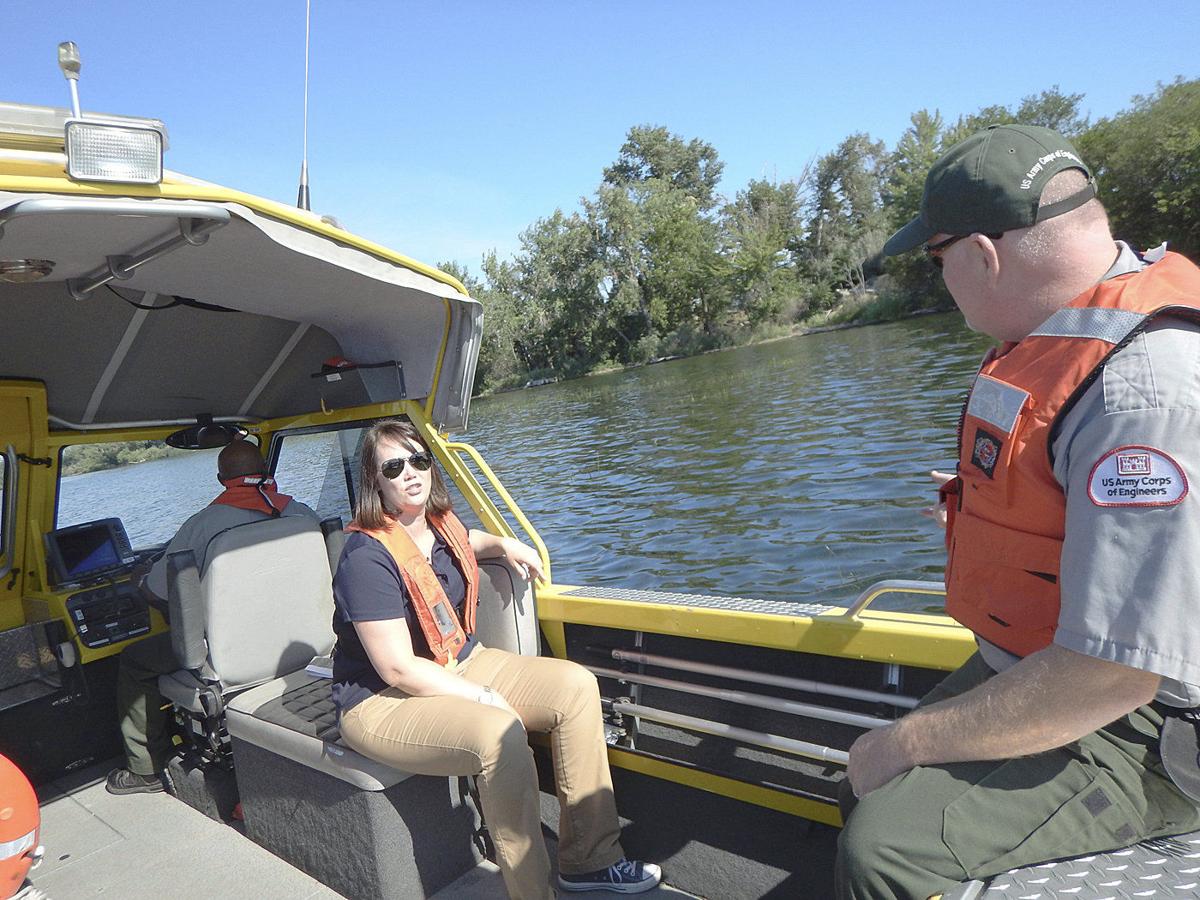 ODA Director Alexis Taylor rides with the U.S. Army Corps of Engineers on the Columbia River to see the problems associated with flowering rush, an irrigation-clogging noxious weed. 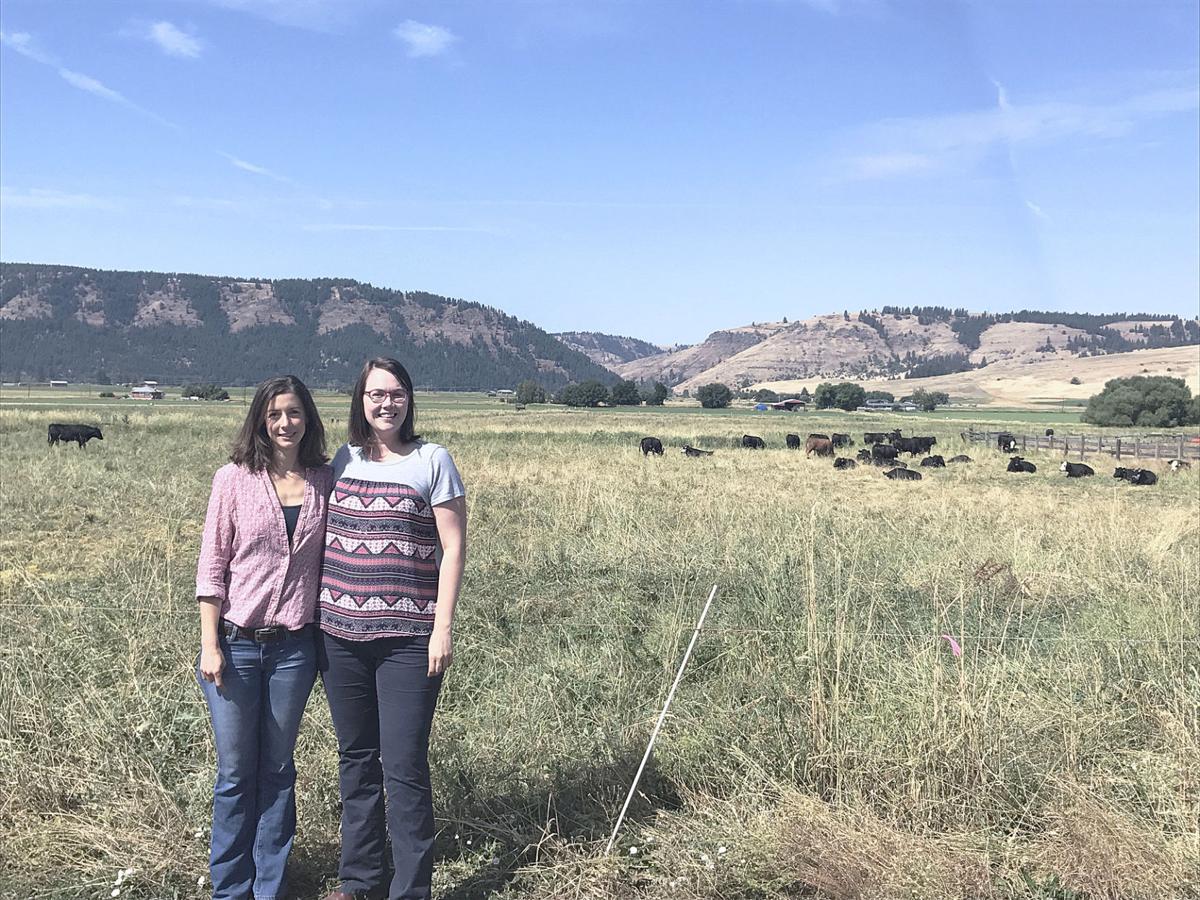 ODA Director Alexis Taylor with Cory Carman, of Carman Ranches, during a tour of Wallowa County in northeastern Oregon. 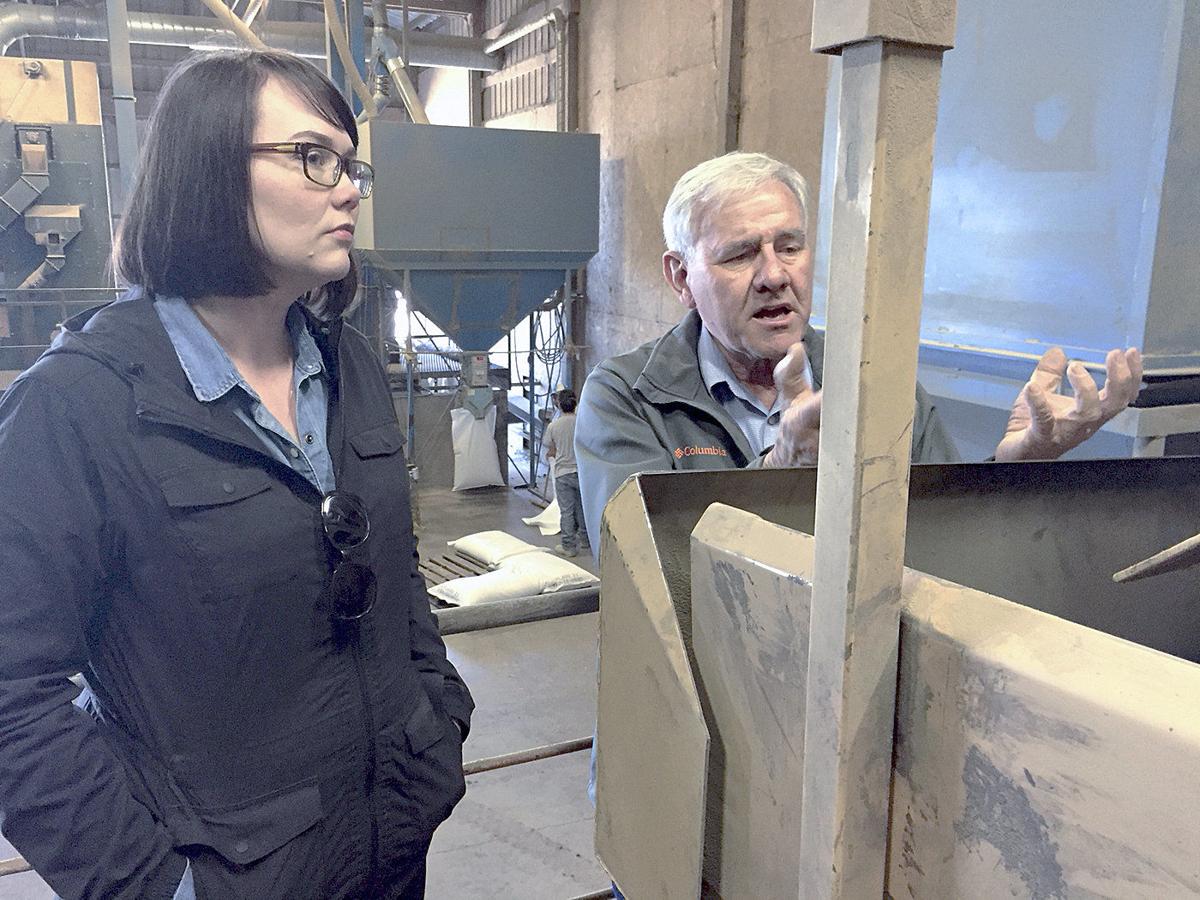 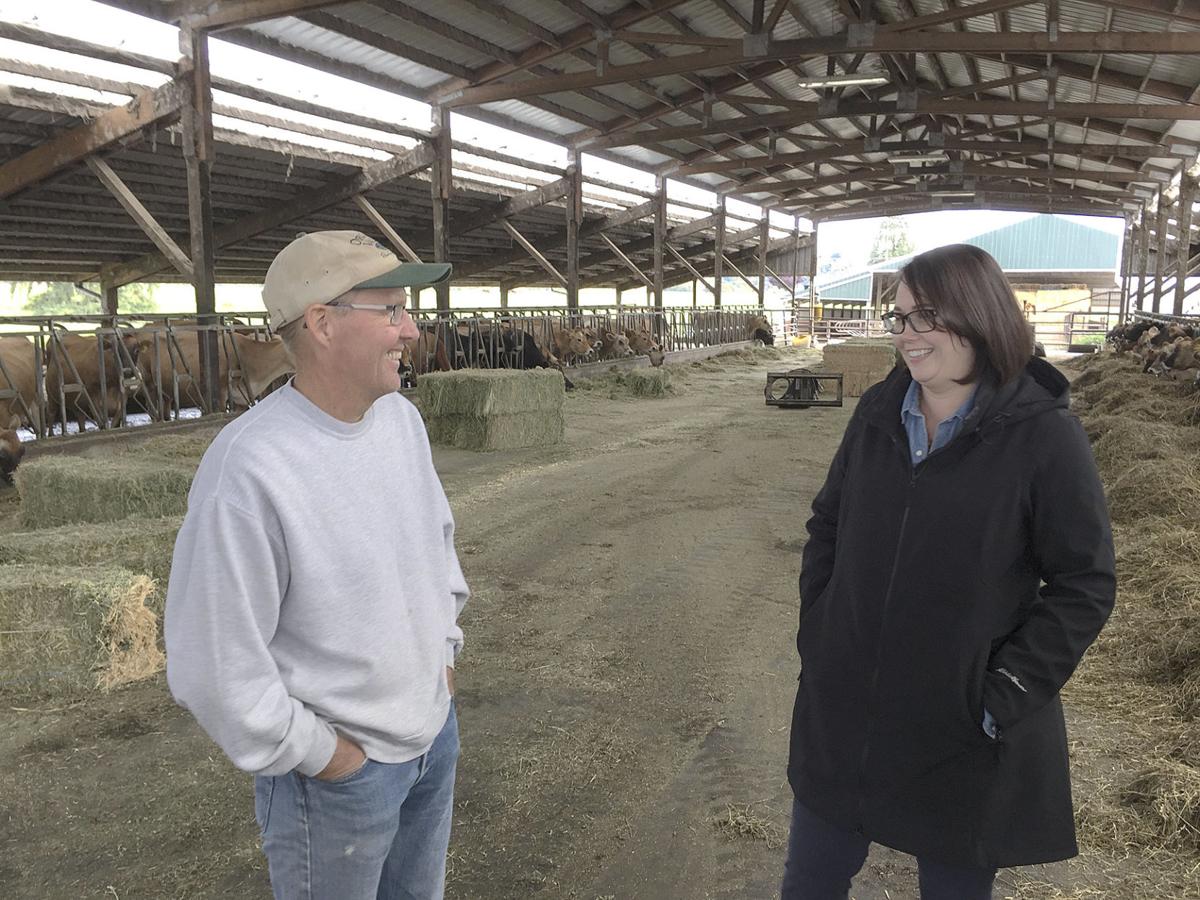 Alexis Taylor, director of the Oregon Department of Agriculture, marked her one-year anniversary on the job Jan. 23.

ODA Director Alexis Taylor rides with the U.S. Army Corps of Engineers on the Columbia River to see the problems associated with flowering rush, an irrigation-clogging noxious weed.

ODA Director Alexis Taylor with Cory Carman, of Carman Ranches, during a tour of Wallowa County in northeastern Oregon.

The walls and shelves in Alexis Taylor’s office at the Oregon Department of Agriculture are lined with framed photographs from her earlier career in Washington, D.C.

There’s Taylor with retired congressman Leonard Boswell from her home state of Iowa, whom she served as legislative director for five years. There’s Taylor next to Tom Vilsack, secretary of agriculture under former President Barack Obama. And there’s Taylor smiling alongside the president and first lady Michelle Obama at the White House.

As her political appointment came to an end in 2016, Taylor began her job search in the Midwest to be closer to her family’s farm outside Holy Cross, Iowa. A friend and co-worker at the USDA then told her about a position in Oregon, leading the state Department of Agriculture in Salem. Taylor had been to Oregon once before, and was intrigued by the wide diversity of farms and ranches.

“That diversity was attractive to me,” said Taylor, reflecting on her first year at ODA. “I thought it would be challenging, but it also opens a lot of exciting opportunities for agriculture in Oregon.”

Despite some initial hesitation, Taylor applied and was appointed by Gov. Kate Brown in November 2016. Taylor arrived the following month for her Senate confirmation, and celebrated her one-year anniversary on Jan. 23.

At ODA, Taylor manages a department with 370 full-time employees and a most recent biennial budget of $114.4 million for 2017-19. The USDA Farm and Foreign Agricultural Service had 14,000 employees across three agencies, with $2 billion in annual salary and expenses.

A big part of Taylor’s first year was simply learning the lay of the land, touring more than 40 farms and ranches across all 36 counties.

“I need that real-life context with farmers and ranchers, so when I’m sitting here in my office with my staff talking about an issue, I’ve gotten to see the people it’s impacting,” she said.

Visiting every county gave Taylor a sense of Oregon’s agricultural landscape, as well as how producers are adapting to remain competitive in the marketplace.

She remembers stopping at Thomas Orchards in Grant County, a tree fruit oasis on the high desert. Another stop in Klamath County revealed how farmers there started growing carrots, something they had never done before, at the request of companies struggling to source the crop from drought-stricken California.

“That willingness to try something new, to be innovative, is pretty unique here in Oregon,” Taylor said. “You don’t find it everywhere.”

Innovation extends to new technologies, Taylor added, whether it’s a dairy incorporating computerized milkers or a vineyard flying drones over blocks of wine grapes to pinpoint pest or water stress.

“It’s a lot of fun to work with an industry that is so willing to look at new technologies and push those bounds,” she said.

Taylor’s outreach has already endeared her to producers and industry groups that work closely with the department.

Barry Bushue, who farms in the foothills of the Cascade Mountains and serves as president of the Oregon Farm Bureau, said Taylor has embraced her role at ODA, along with the challenges and complexity of Oregon agriculture.

“This diversity presents a challenge to anyone new to the state and its regulatory programs,” Bushue said via email. “Despite these challenges, Alexis has started to get her legs under her and has embraced her role.”

Jana McKamey, government relations director for the Oregon Winegrowers Association, said Taylor has taken an interest in their industry, and promoting the Oregon wine brand. Taylor was also the keynote speaker at the association’s annual meeting in January.

“She really dove in and wanted to learn more about us,” McKamey said. “We’re interested in helping to develop these markets domestically and internationally to drive more economic development here in the state.”

The interactions Taylor had during her cross-state road show helped to inform the department’s new five-year strategic plan, a collaboration between staff and stakeholders that was officially announced earlier this year.

Wherever she went, Taylor said the number one concern was challenges facing the next generation of farmers and ranchers. She pointed to the state Agricultural Heritage Program, approved by the 2017 Legislature, to develop grants for succession planning and easements. A 12-member commission met for the first time in February to begin writing rules for the program.

Another strategy is outlined under the ODA Strategic Plan under “Key Objective 6,” promoting agriculture as an exciting career choice for students. Taylor calls this the “agriculture is cool” objective.

Citing a 2015 study by the USDA and Purdue University, Taylor said there will be enough college graduates with expertise in food, agriculture, renewable natural resources, or the environment to fill just 61 percent of jobs available in agricultural fields through 2020.

The ODA Strategic Plan goes on to describe how ODA can work more closely with partner agencies and review its policies to ensure farmers’ issues are being addressed across the state, such as water quality and availability, labor shortages and the urban-rural divide.

Tami Kerr, executive director of the Oregon Dairy Farmers Association, said they have also had discussions with Taylor about challenges with the confined animal feeding operation, or CAFO, program. With the industry already hurting from low milk prices, Kerr said it is important to maintain a good working relationship with ODA regulators.

So far, Kerr said she has been impressed by Taylor.

“She’s off to a good start,” Kerr said. “It’s nice that she’s invested time in wanting to meet the producers.”

Ivan Maluski, policy director for Friends of Family Farmers, said his organization has tried to underscore the importance of ODA supporting small farms. While it hasn’t gone perfectly — Maluski was critical of the department’s approval of Lost Valley Farm, a 30,000-cow dairy in Morrow County that is now being sued by the state for wastewater violations — he said it is clear the door is open to small farm input.

“I’m hopeful there will continue to be receptiveness on things the agency can do to support small and mid-size farms and local food systems,” Maluski said. “I think the signs are encouraging on the whole.”

With year one under her belt, Taylor is showing no signs of letting up on her travel schedule.

She intends to promote regional tours around the state to continue meeting with farmers and local officials, holding roundtable discussions and building on her relationships.

“I’m by no means an expert on all issues that touch agriculture in all parts of the state,” she said. “Continuing to learn is going to be key, and getting out there.”

Taylor is also planning a trade mission to China in May, bringing representatives of roughly a dozen companies to Shanghai. China is an exciting market, she said, as the country is poised to add roughly 160 million middle-class households over the next decade.

“That’s a lot of purchasing power,” she said.

Taylor acknowledged there is uncertainty swirling around federal trade policy, but said the state can play a role in helping Oregon companies build their reputation among export markets. This, she said, was her forte working with the USDA. In fact, Taylor said she has visited every continent except Antarctica in her lifetime.

Nathan Jackson, president of the Oregon Cattlemen’s Association and general manager of sales and administration at K Bar Ranches in Myrtle Creek, Ore., said he is especially encouraged by Taylor’s experience in international trade, which is key for beef producers to earn top dollar for their cattle.

Overseas consumers use more parts of the steer, such as the tongue and offal, that aren’t as desired in the U.S., Jackson said. That value can add up to a little more than $200 per head.

“(Taylor) knows an awful lot about trade and developing trade in those Asian markets,” Jackson said. “I think that’s exactly what Oregon needs in the department.”

However, Stone said Taylor has done a terrific job building bridges and reaching out to every corner of the state.

“She has done a really good job of outreach, not only to the nursery and greenhouse industry,” Stone said. “She has gone to every reach of the state to understand the agricultural community and also its people.”

Taylor said ODA is unique in that it functions as both a regulatory agency, as well as an economic agency. Balancing those two roles can cause tension sometimes, but she said it can also drive them to work toward common sense solutions.

“I guess I view part of my role as being an advocate for agriculture within the governor’s cabinet,” she said. “We want our programs to be nimble, to be flexible, to serve the needs of agriculture.”