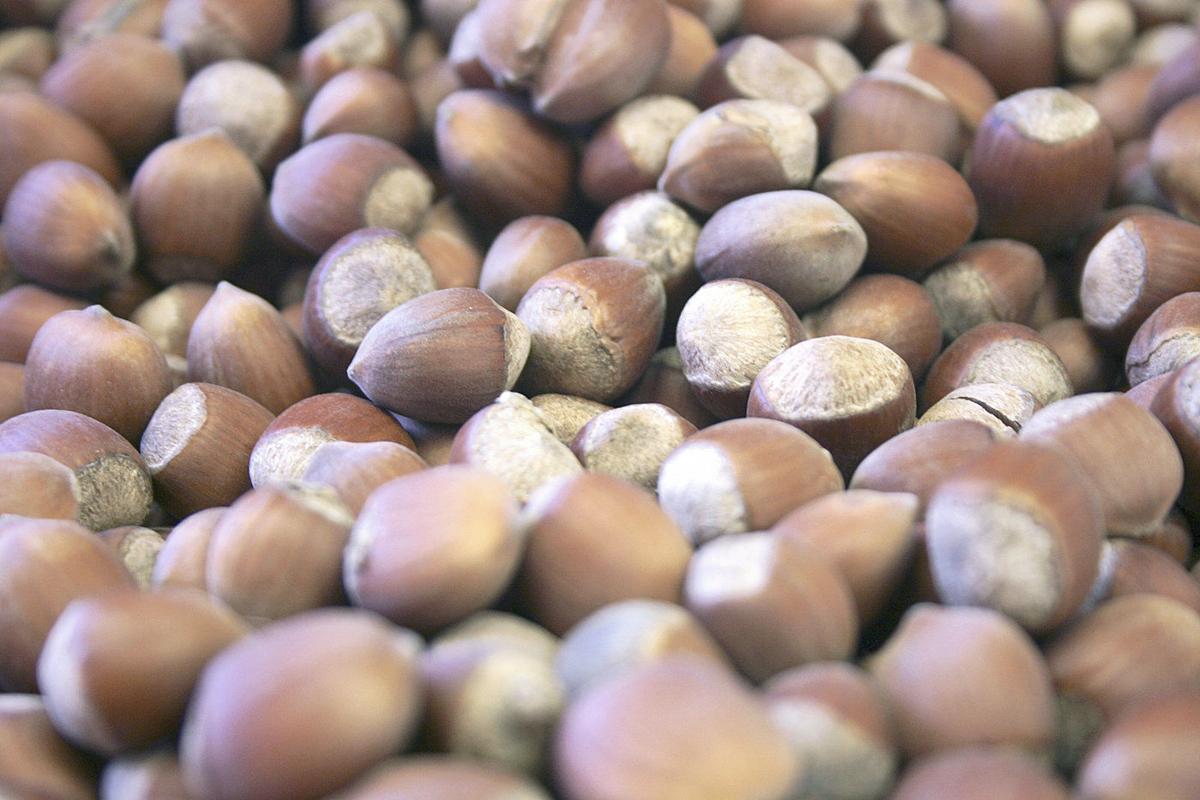 Hazelnuts are one of the fastest growing crops in Oregon, with approximately 3,000 new acres planted each year. The introduction of new varieties, increased demand in Asia, freezes in competing countries and expansion of Ferrero, the company that makes Nutella, have all contributed to the growing industry. 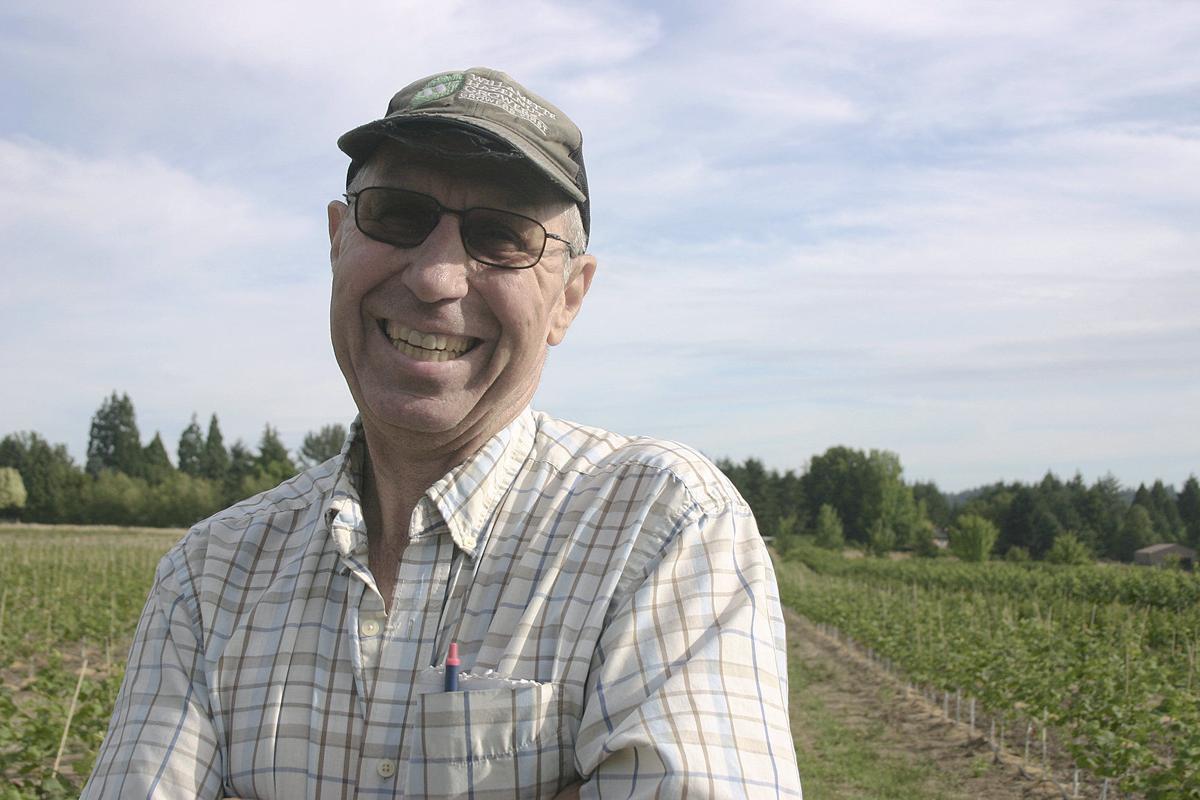 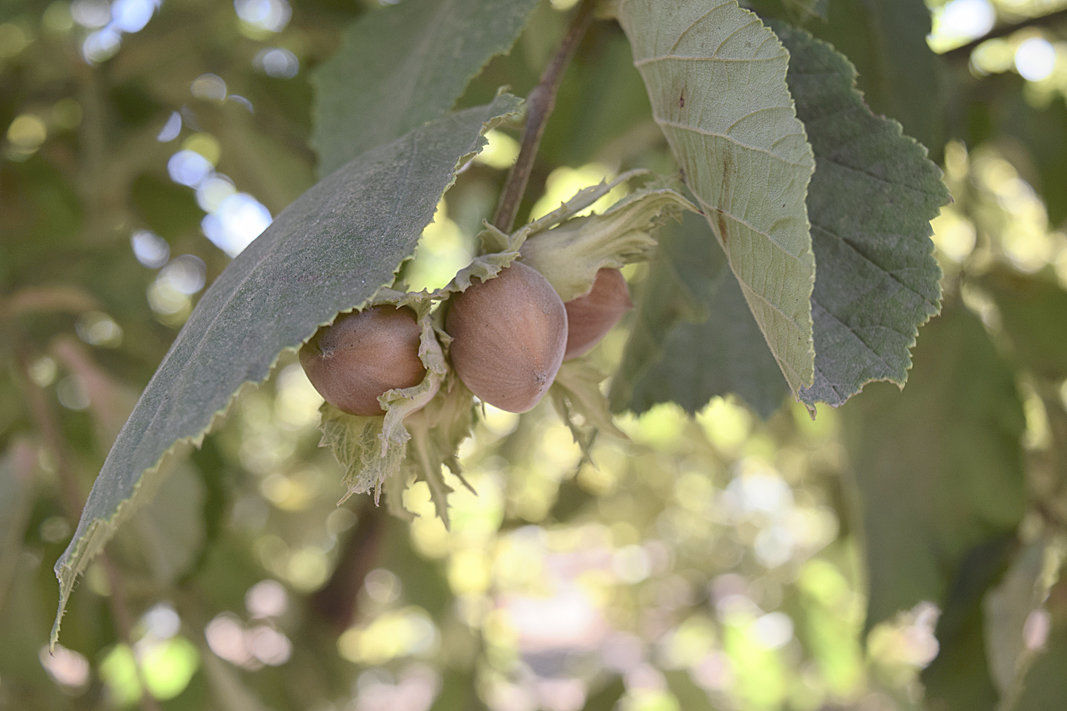 Hazelnuts have become one of Oregon's fastest-growing crops, with 3,000-4,000 new acres planted each year. 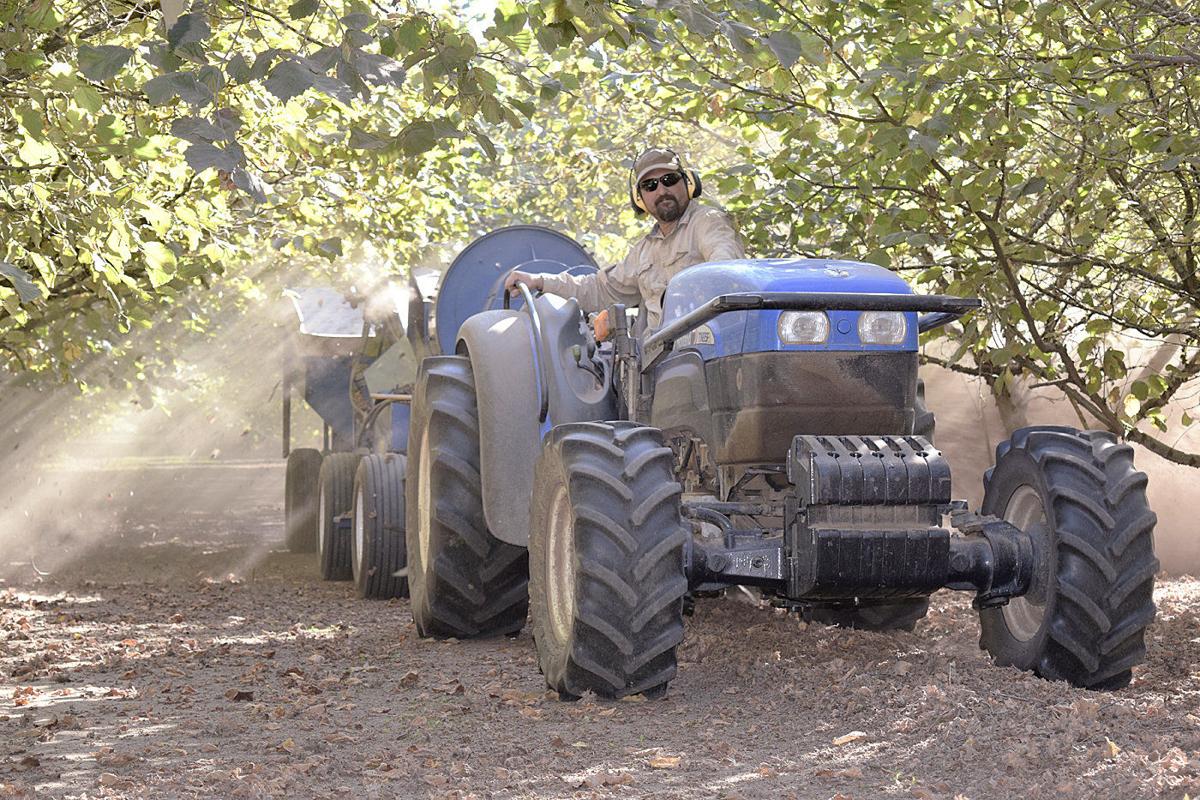 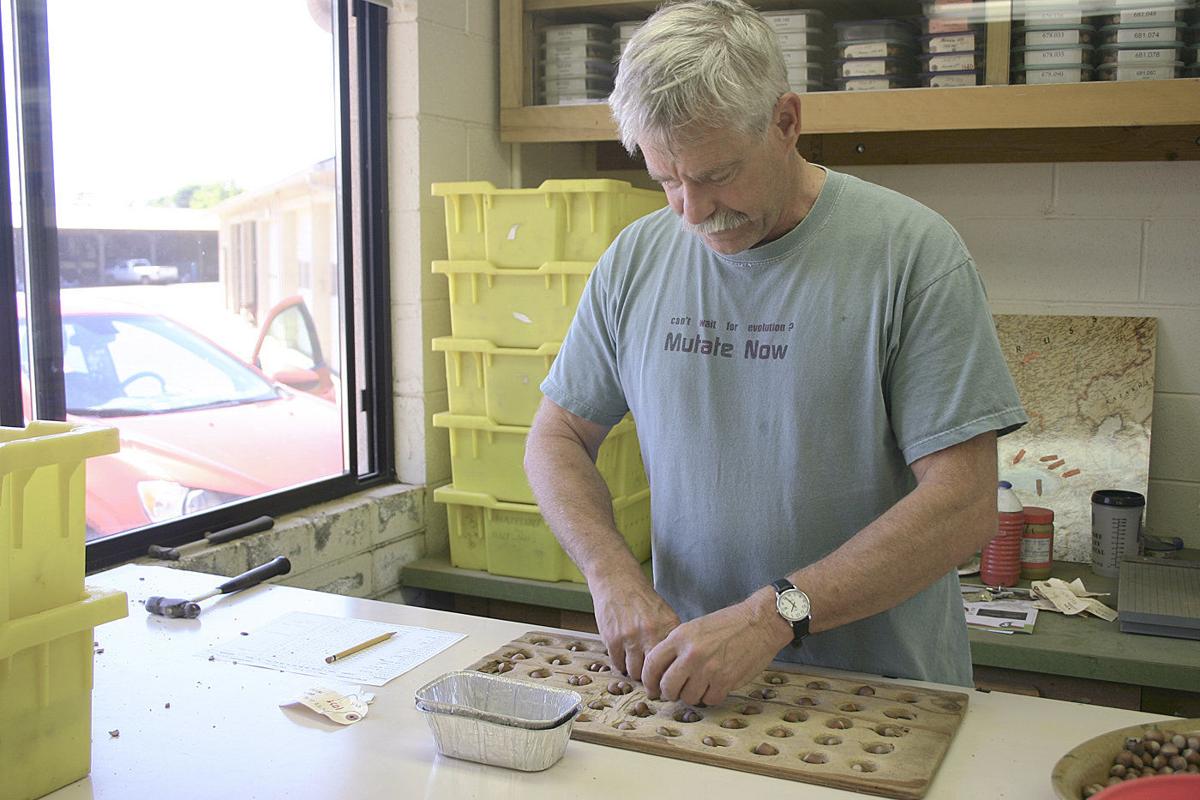 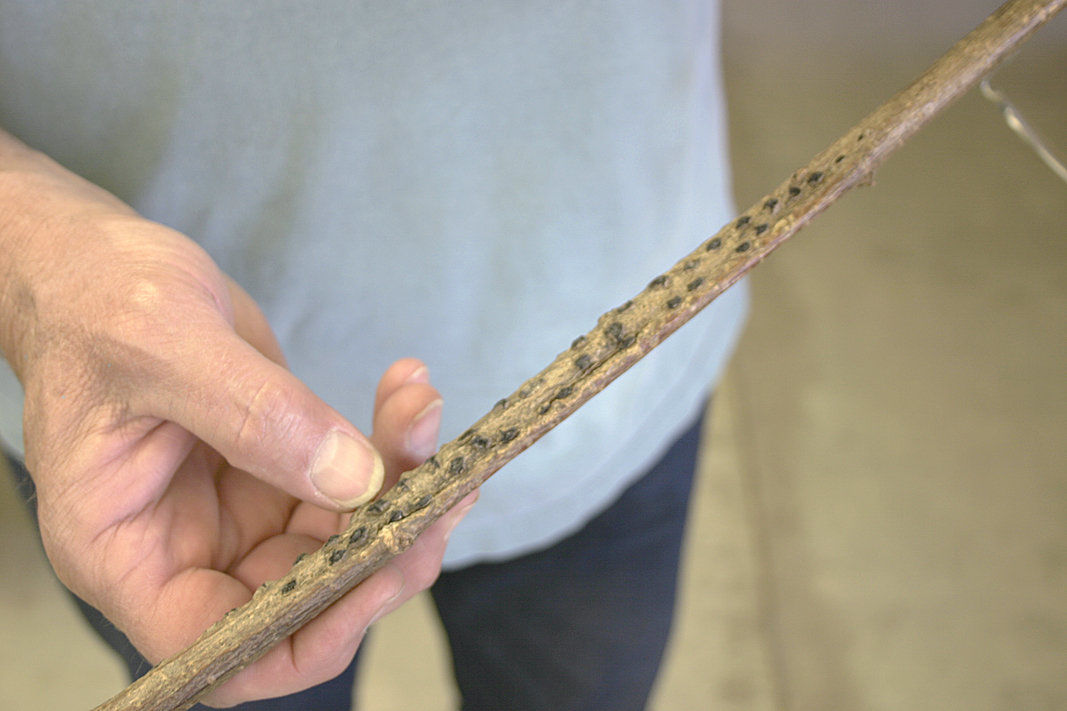 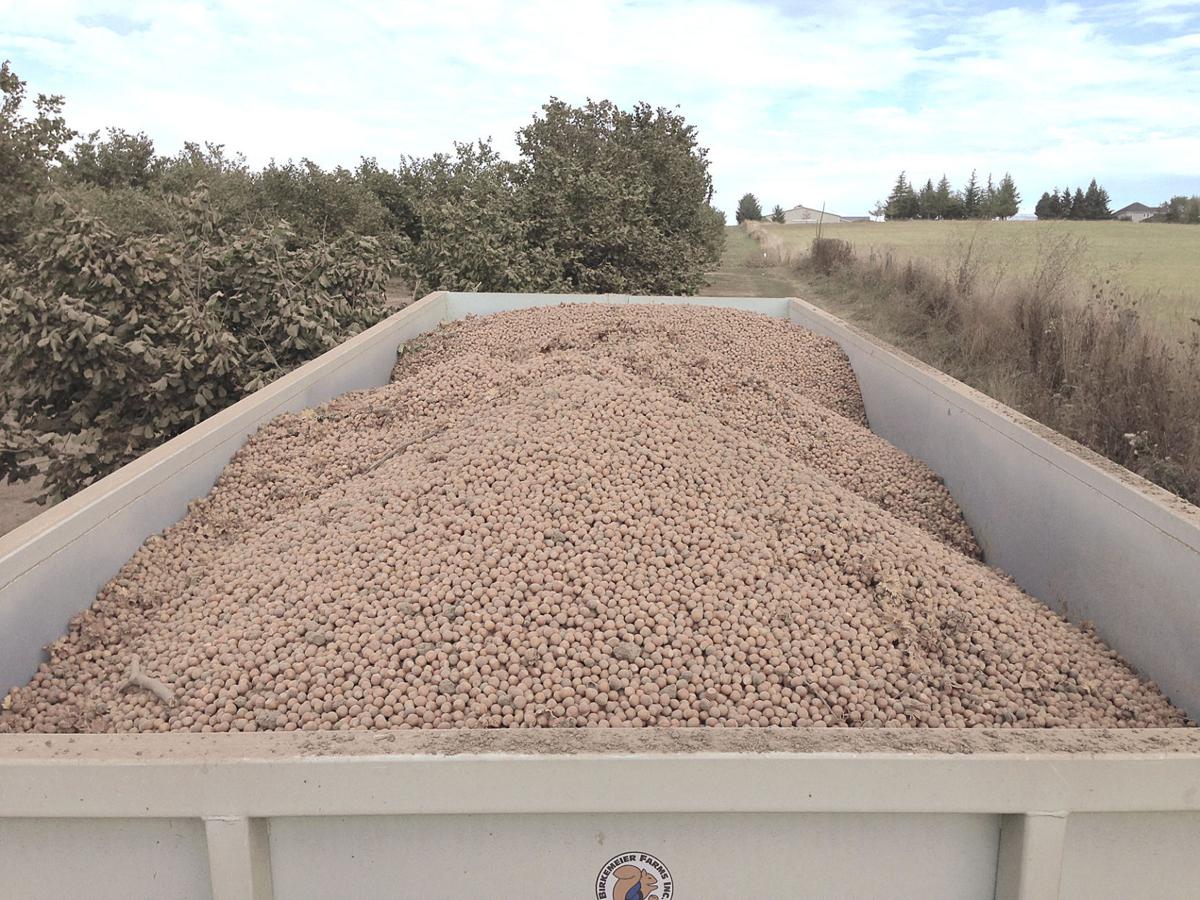 Willamette Hazelnut Growers constructed a metal bin that can hold approximately 20 times more hazelnuts than traditional harvesting equipment can transport. Before the bin, growers would transport nuts in large boxes. The processing company made the bin to assist new bulk growers who have not invested in infrastructure to transport their crop to processors. 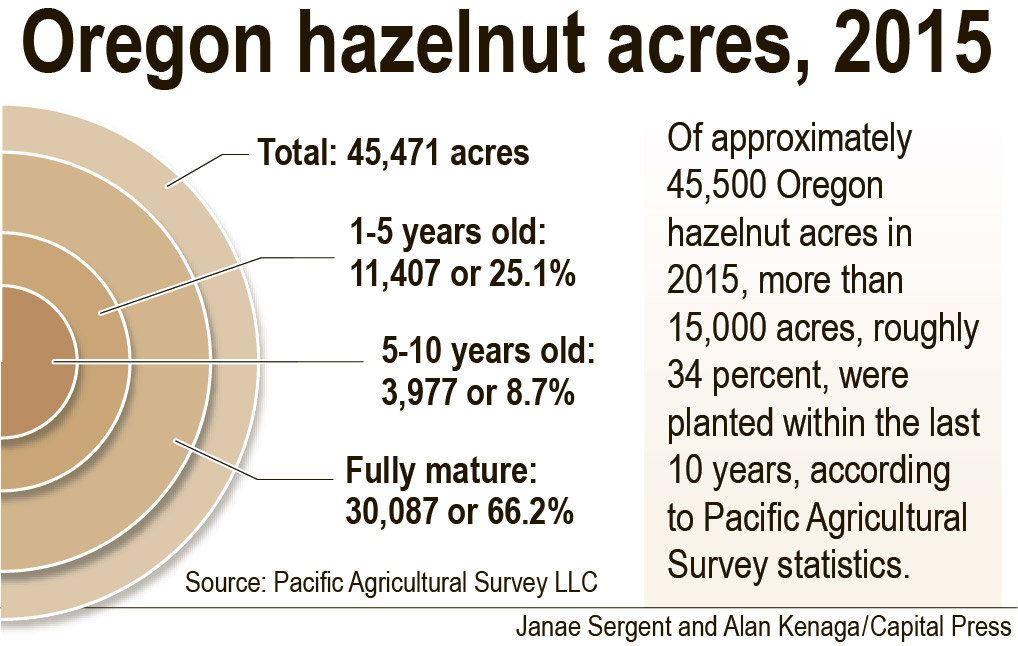 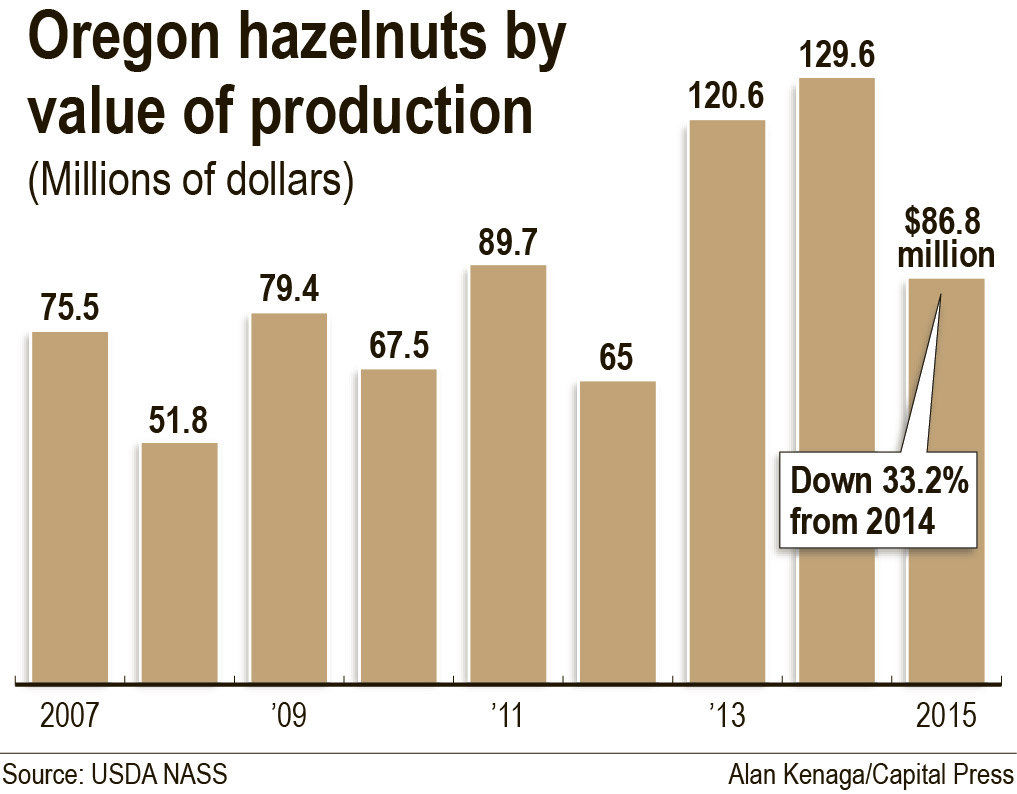 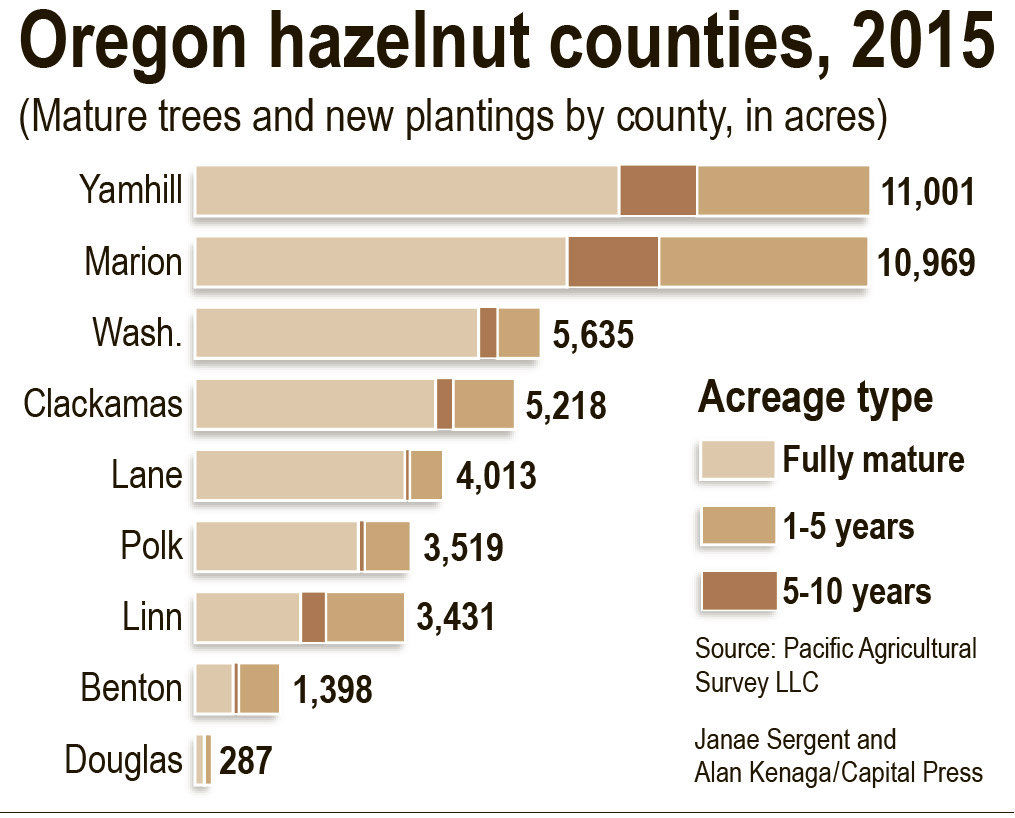 Hazelnuts are one of the fastest growing crops in Oregon, with approximately 3,000 new acres planted each year. The introduction of new varieties, increased demand in Asia, freezes in competing countries and expansion of Ferrero, the company that makes Nutella, have all contributed to the growing industry.

Hazelnuts have become one of Oregon's fastest-growing crops, with 3,000-4,000 new acres planted each year.

Willamette Hazelnut Growers constructed a metal bin that can hold approximately 20 times more hazelnuts than traditional harvesting equipment can transport. Before the bin, growers would transport nuts in large boxes. The processing company made the bin to assist new bulk growers who have not invested in infrastructure to transport their crop to processors.

The owner of Birkemeier Nursery supplies farmers with young hazelnut trees, but the demand has been so great that his 300-acre hazelnut farm and nursery is sold out for 2016 and has already sold out of some varieties for 2017. Birkemeier has been forced to start a waiting list for new growers who want to plant the popular nut tree.

Birkemeier called the last four years a “renaissance in the hazelnut industry” and sees a bright future for Oregon hazelnuts.

“A lot of things have come together at the same time that have really pushed the hazelnut industry forward,” Birkemeier said. “There’s a gaining realization in the agricultural community that hazelnuts are the things to grow in Oregon.”

Willamette Valley growers have planted between 3,000 and 4,000 acres of hazelnuts a year since 2014, according to Pacific Agricultural Survey. Owner Mike McDaniel said he expects even more new acreage to be added this year.

New growers with no agricultural experience, farmers looking to diversify their crops and long-time hazelnut producers are among those planting trees, with this year’s statewide acreage blossoming to about 46,000 acres.

Hazelnuts have been grown in the Willamette Valley since the first tree was planted in 1858 because of the region’s unique rich soil and mild climate. Today Oregon produces 99 percent of U.S. hazelnuts and 4 percent of the world’s supply.

Oregon State University hazelnut breeder Shawn Mehlenbacher said he could have never anticipated the growth in hazelnut acreage he has seen during the last few years.

“This industry is growing faster than I ever imagined,” Mehlenbacher said, adding that “we don’t have any problem selling what we can grow.”

The picture wasn’t always so rosy. In a 2012 survey, the National Agricultural Statistics Service reported that hazelnut acreage and production were flat, a disease was devastating hazelnut trees, and prices were stagnant.

However, a series of “God moments” turned the industry around, Birkemeier said.

The biggest breakthrough came in 2009, when OSU’s Mehlenbacher released several cultivars resistant to eastern filbert blight, bringing new hope to growers. The fungal disease had showed up in Oregon in 1973 and eventually infected a large portion of the state’s hazelnut orchards, sending the industry into gradual decline.

As the resistant trees began to replace those that were susceptible to EFB, other events further boosted the industry.

Ferrero U.S.A. expanded its production of Nutella, a hazelnut-and-chocolate spread especially popular among young consumers. Ferrero already operated a plant in Ontario, Canada, and in 2012 built another in Mexico to meet the growing demand, with Oregon the closest hazelnut provider.

Two years later, a major freeze wiped out one-third of Turkey’s hazelnut crop. The nation provides 70 percent of the world’s hazelnuts. With that production decline, several countries — particularly China — turned to Oregon to meet their demand.

The cost of a new hazelnut orchard depends on the density of the planting, whether outside contractors do the work and the price of the drip irrigation system.

OSU Orchard Crops Extension Specialist Nik Wiman said hazelnut trees cost an average of $7 to $8 each. Some growers plant orchards in a single-density configuration — 108 trees per acre. Contracting someone to plant the orchard adds about $1 per tree to the cost, he said.

A single-density orchard begins producing hazelnuts — about 75 pounds per acre — in the third year. Production will typically increase each year until an orchard reaches full production — about 2,800 pounds per acre — by the 12th year, according to OSU.

Oregon Hazelnut Commission Administrator Meredith Nagley said the nuts are popular with the state’s 650 growers because they produce long-term yields, are sustainable and don’t require many inputs once they are planted and start yielding nuts.

Leroy and Barney Kropf first planted 35 acres of hazelnuts on their Linn County, Ore., grass seed farm in 2009. As of this year, their hazelnut orchard has grown to 300 acres, and Barney Kropf said they plan to add 30 acres a year.

“We were expecting to expand but not this fast at all,” Kropf said.

He said the grass seed business is unpredictable and hazelnuts are the opposite, which makes them a good complementary crop.

Kropf said one of the most attractive things about growing hazelnuts is the high demand from processors.

At Willamette Hazelnut Growers in Newberg, Ore., CFO and Sales Manager Michael Severeid said the rapidly growing industry has put pressure on processors to obtain supply and has created competition for the nuts.

According to the USDA noncitrus fruits and nuts summary published this month, Oregon hazelnuts sold for an average of $1.34 per pound in 2013, and prices peaked in 2014 at $1.80 per pound after the frost in Turkey. In 2015, the average price per pound was $1.40.

“There’s a lot of competition with the processors to get supply and meet demands,” Severeid said. “The opposite is true for growers. Everyone wants your business.”

To attract new growers, Severeid said Willamette Hazelnut helps them be more successful. One effort is a giant metal bin that can carry up to 20 times more hazelnuts than typical harvest bins.

Severeid said Willamette Hazelnut built the bin for growers to make it easier and more cost-effective for them to handle their crops.

Severeid sees even more room for expansion in the North American market.

“Our problem has always been an inadequate supply for export,” Severeid said. “We never have a problem selling what we can produce.”

New and veteran growers don’t only get support from processors. The hazelnut commission’s Nagley said the industry is one of the most collaborative and supportive she has ever seen.

Mehlenbacher said that’s because the annual hazelnut production is easily sold, which in turn encourages growers to work together.

OSU Extension’s Wiman works in cultural practices, researching the physiological needs of the trees and serving as a resource for growers.

“My job is to empower growers and investigate the needs of the trees,” Wiman said.

Birkemeier also stressed the importance of the strong relationship between OSU and growers.

In 2010, OSU and Oregon hazelnut growers established the Hazelnut Variety Committee and agreed to pay royalties for cultivars created by OSU in return for exclusive rights to new cultivars. When OSU releases a new cultivar, no overseas growers can buy it for three years.

“Hazelnut people are the example of how to behave, support new people and support research,” Mehlenbacher said. “We’re the little guys in the world. We have to work together to be successful.”

With more acres going into production every year, growers and processors see a bright future for the hazelnut industry.

Having been in the hazelnut industry his whole life as a grower and a nurseryman, Birkemeier said he is excited.

“It’s so rewarding to see an industry go through all of that struggling for 30 years and to all of a sudden see this huge resurgence in hazelnuts,” Birkemeier said.