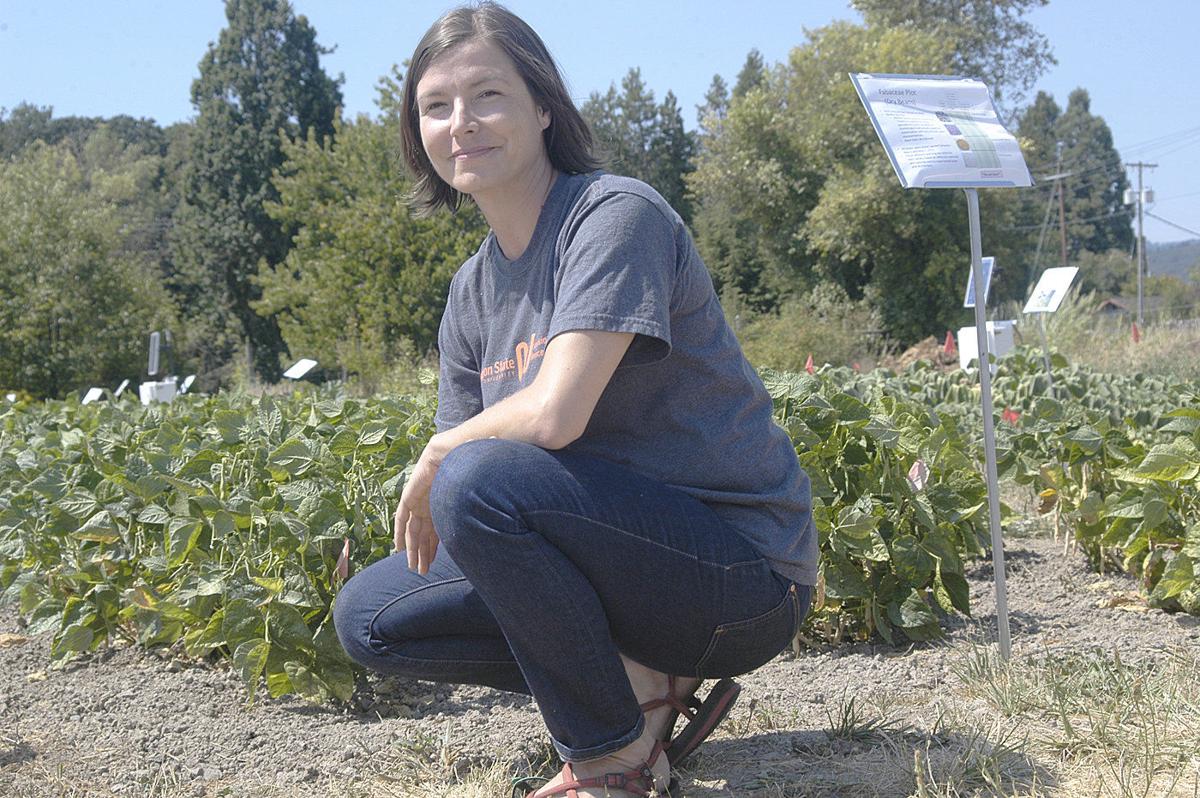 Amy Garrett, an instructor with Oregon State University Extension's Small Farms program, with vegetables grown without irrigation in Corvallis, Ore., in August 2015. Dry farming — using little or no irrigation — may be an option for farmers who lack water rights. 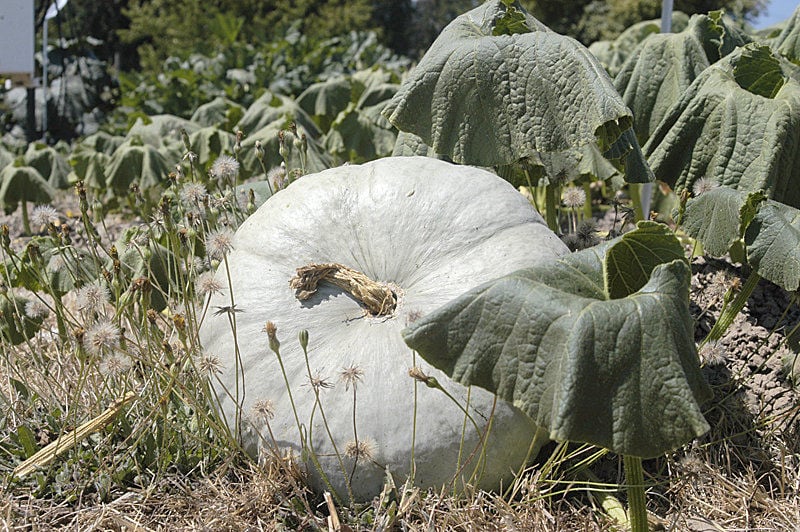 Without irrigation, leaves of a squash variety called Stella Blue wilted in the mid-day heat at a dry farming demonstration plot at Oregon State University in August 2015. But the plants still produced healthy squash.

Amy Garrett, an instructor with Oregon State University Extension's Small Farms program, with vegetables grown without irrigation in Corvallis, Ore., in August 2015. Dry farming — using little or no irrigation — may be an option for farmers who lack water rights.

Without irrigation, leaves of a squash variety called Stella Blue wilted in the mid-day heat at a dry farming demonstration plot at Oregon State University in August 2015. But the plants still produced healthy squash.

Oregon State University’s dry farming project, which began when drought still gripped much of the West, has expanded to the point that 30 farms are hosting field trials this year on the prospects of growing vegetables and orchard crops with little or no irrigation.

Twelve Western Oregon sites will host field days in August, with visits available every Tuesday — Aug. 1, 8, 15, 22 and 29. The cost is $10 per person per date. Registration and other details are at http://smallfarms.oregonstate.edu/dry-farm/dry-farming-collaborative

Amy Garrett, an assistant professor who heads the project for OSU Extension’s Small Farms Program, said the idea of reducing or even eliminating irrigation continues to draw interest from farmers and gardeners across the country and even internationally. This year, project participants in Western Oregon are growing squash, melons, zucchini, dry beans, tomatoes or corn in 100-square-foot plots that allow for replication and comparison of results.

Garrett, who has been researching dry farming since 2013, said the project is 10 times larger than when she started. The project’s Facebook group, Dry Farming Collaborative, now has more than 270 members.

The program particularly attracts small farmers and new farmers, who are drawn to growing food but run up against one of agriculture’s basic problems.

“What started me off on this path is that I work with a lot of landowners who are on land without water rights,” Garrett said.

The most recent, or “junior,” water rights holders are the first to be shut off during shortages, and Garrett said some people interested in dry farming came to it after losing irrigation in 2015. Others lack the capital to sink a well or set up an irrigation system.

In urban areas, master gardeners who are paying for expensive city water make up a growing contingent of people interested in dry farming, Garrett said.

It’s not for everyone, however, and it’s not as simple as keeping the sprinklers turned off. Dry farming is best suited for Western Oregon and Western Washington, where the soil soaks up plentiful rain from fall, through winter and into the spring. In addition, dry farming requires careful site selection, soil preparation and planning, Garrett said. Seeds and plant starts are planted deep to put them closer to the damp soil below.

Allen Dong, who operates Regulus Associates farm in Elmira, Ore., west of Eugene, is hosting one of the field day events. He’s a former University of California-Davis irrigation researcher, and said dry farming comes with trade-offs.

Dry farming hastens plant maturity and shortens the season, he said, but yield decreases in a linear relationship to water availability.

Dong grows dry beans and garlic for market, and dry farms the garlic to help with disease control. “I get a higher yield if I irrigate, but it’s not very marketable when they get all that gray mold.”

Plants don’t care where water comes from, he said, and will seek it out in the soil profile if not getting it from irrigation.

“For people with no water rights, they can do dry farming with no irrigation, but they have to keep in mind there’s a lot of competition for that water stored in the soil profile — mainly weeds.”

He said people trying to dry farm must reduce planting density, remove cover crops that will compete for water and make sure no tree roots are snaking underground to steal moisture.

He said a model of reduced irrigation, rather than no irrigation, is a better choice for farmers.

“There are things you have to pay attention to with dry farming,” he said. “You can make a lot more mistakes when you reduce irrigation, and still come out ahead.”