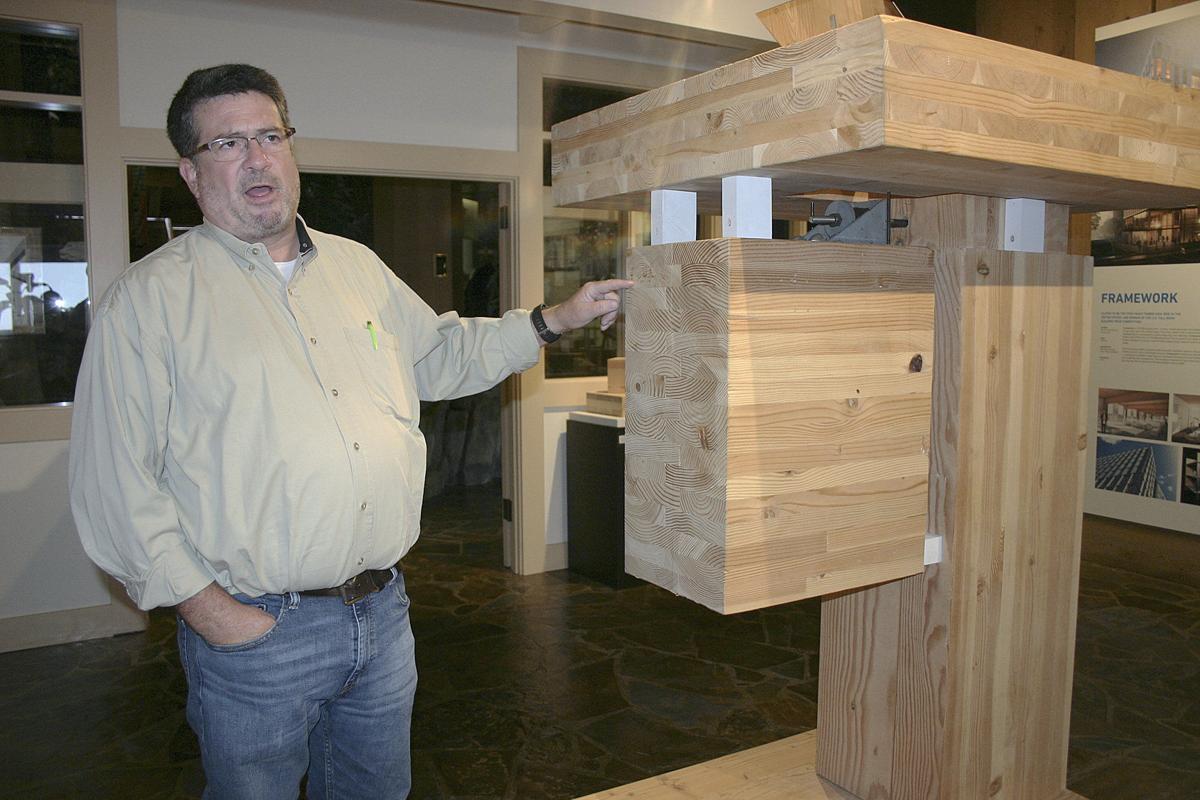 Timm Locke, director of forest products for the Oregon Forest Resources Institute, explains the benefits of mass timber at the World Forestry Center in Portland. 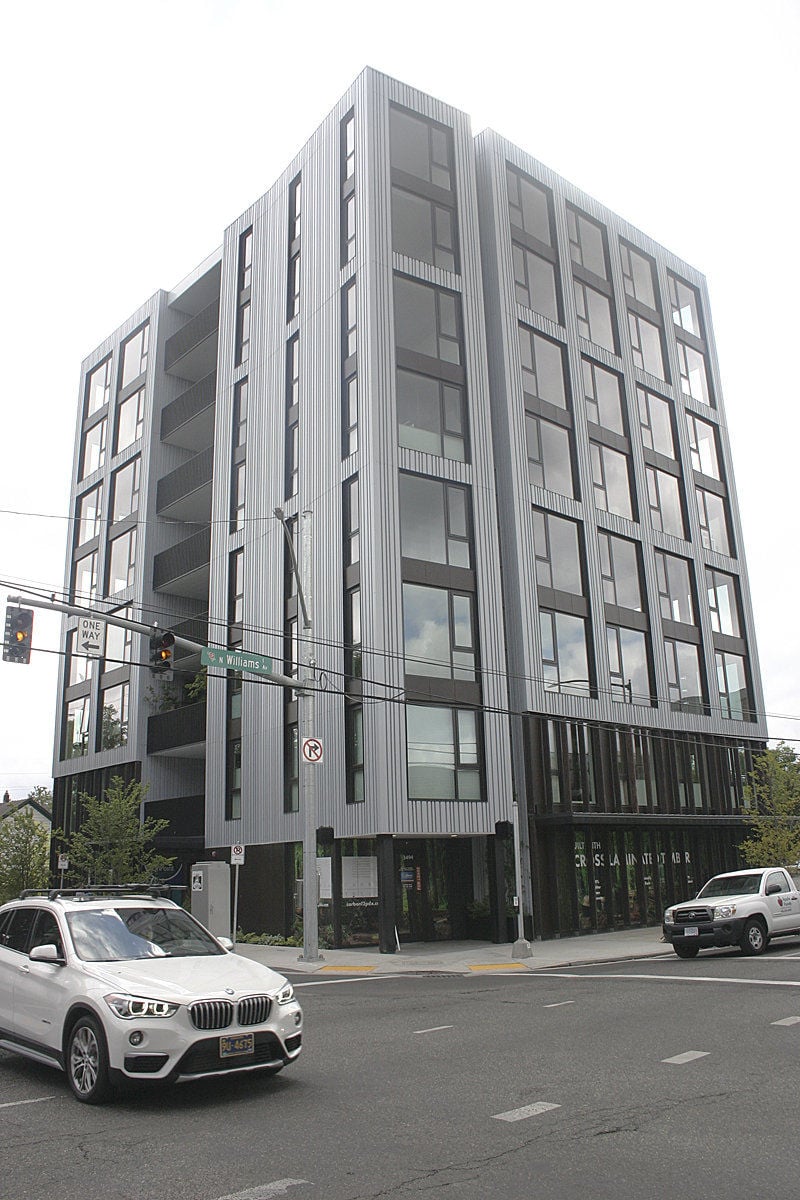 Carbon 12, an eight-story condominium building in Portland, Ore., is made with mass timber. 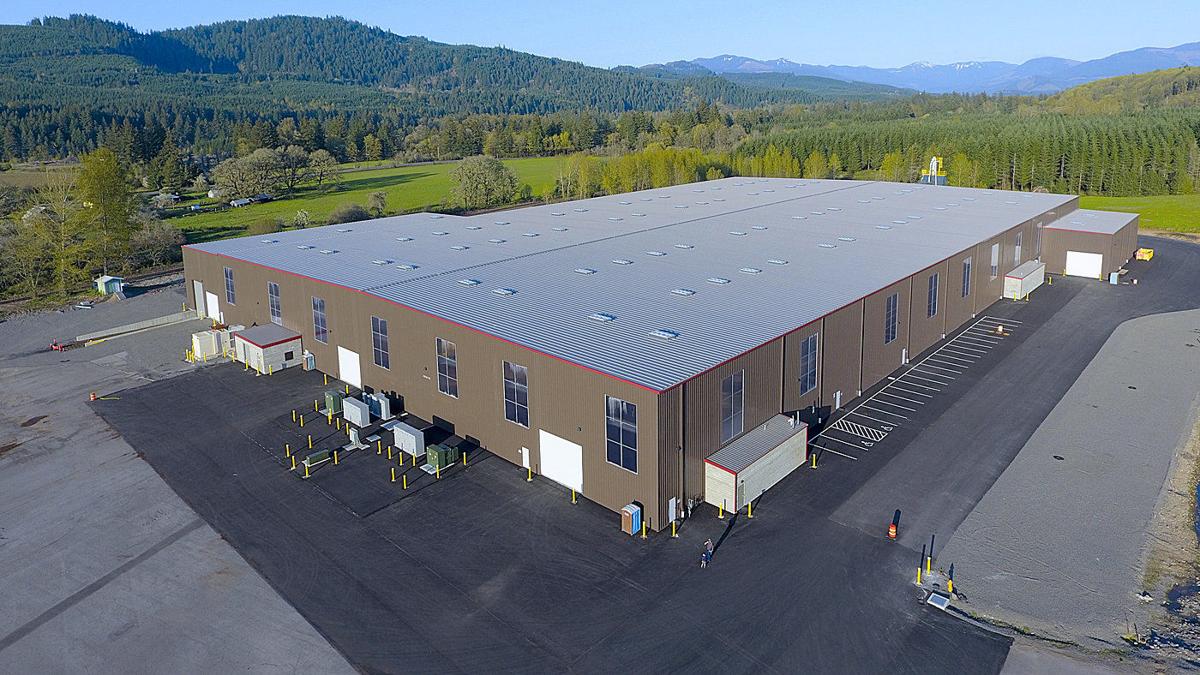 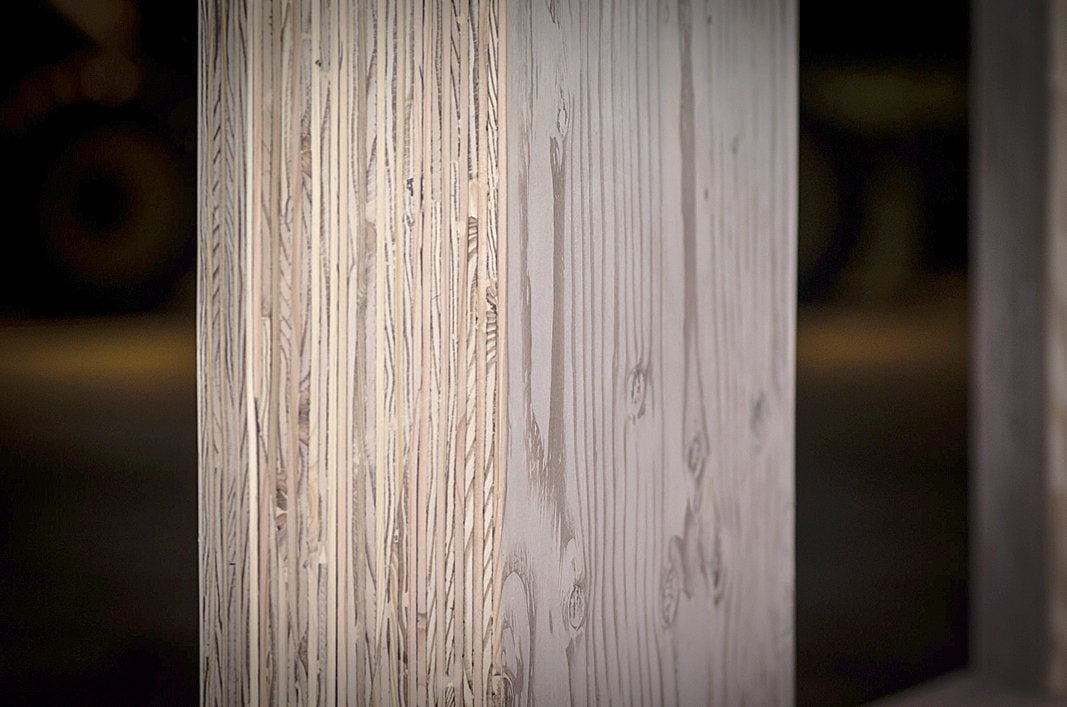 A closeup view of mass plywood manufactured at Freres Lumber Co. shows the layers of veneer. Mass plywood can be made up to 12 feet wide, 48 feet long and 24 inches thick. 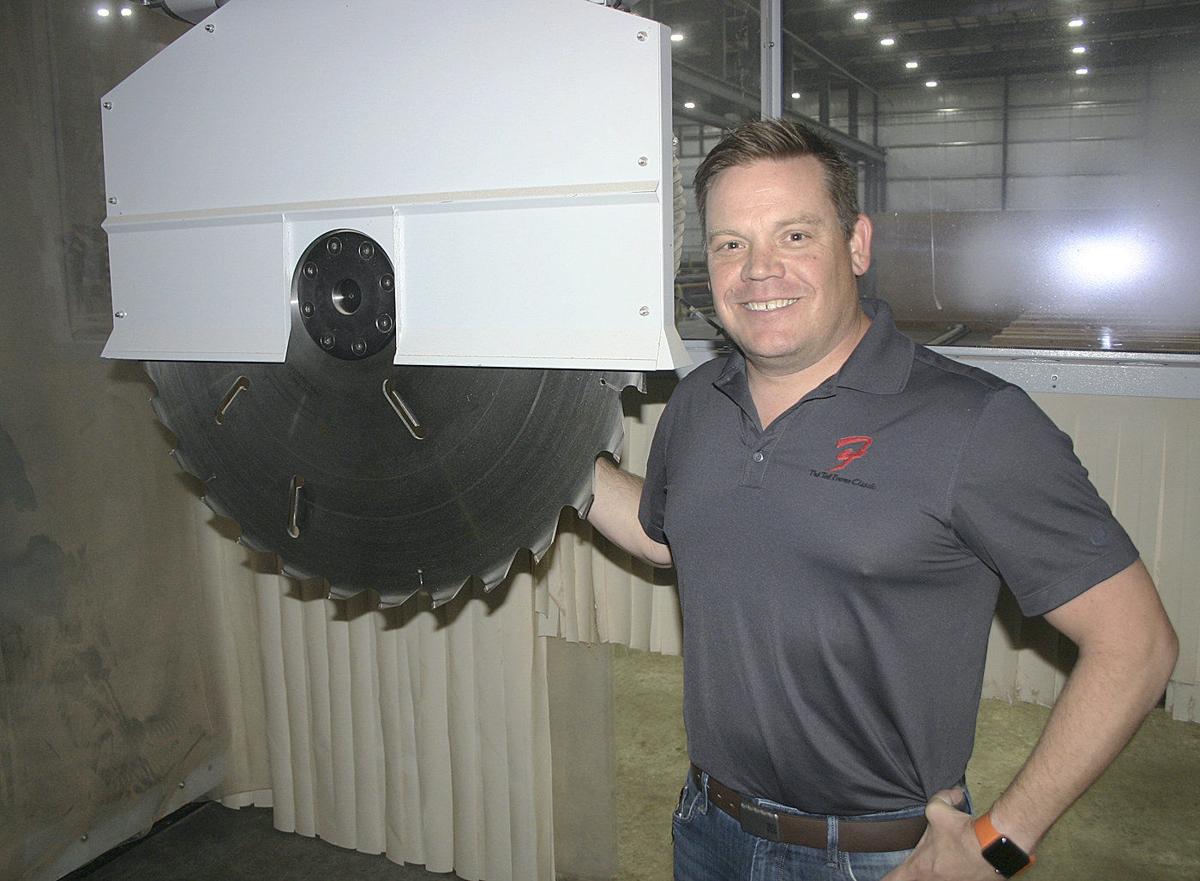 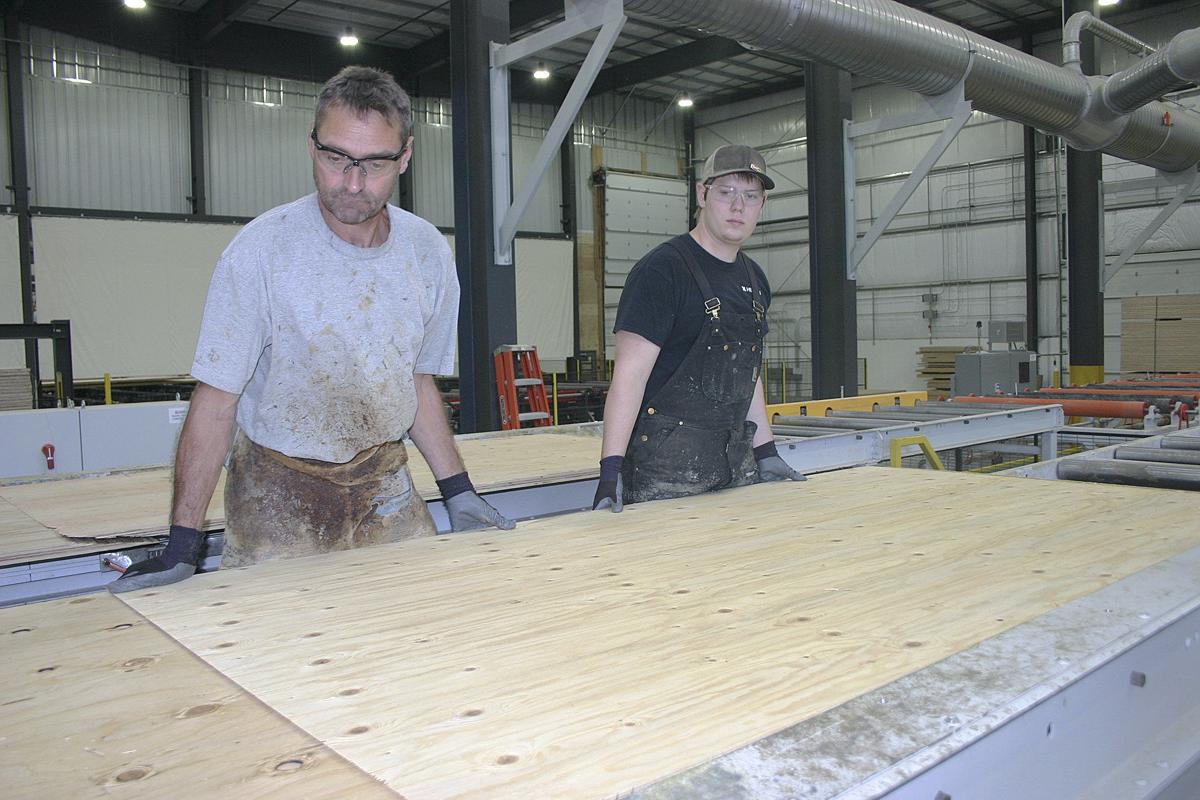 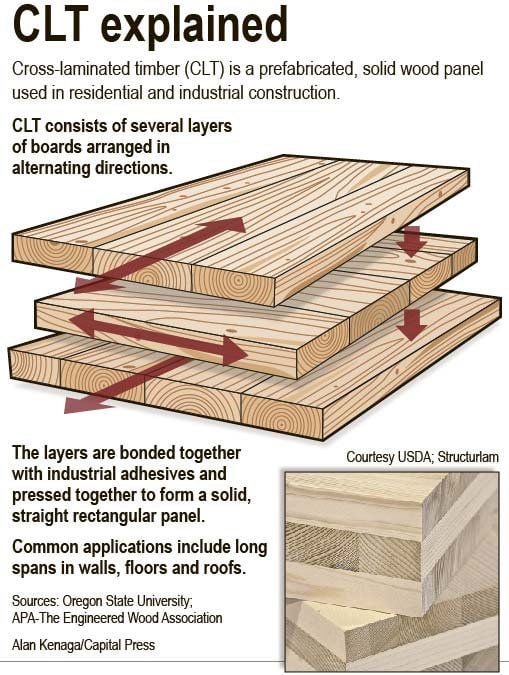 Timm Locke, director of forest products for the Oregon Forest Resources Institute, explains the benefits of mass timber at the World Forestry Center in Portland.

Carbon 12, an eight-story condominium building in Portland, Ore., is made with mass timber.

A closeup view of mass plywood manufactured at Freres Lumber Co. shows the layers of veneer. Mass plywood can be made up to 12 feet wide, 48 feet long and 24 inches thick.

PORTLAND, Ore. — Timm Locke relishes a chance to drive around Portland and showcase the latest commercial buildings made with mass timber, a construction material that uses wood beams and panels instead of concrete and steel.

Every piece of cross-laminated timber — or CLT for short — is prefabricated, designed for a specific part of the building, said Locke, director of forest products at the Oregon Forest Resources Institute. That means buildings go up faster, with fewer workers.

Wood is also environmentally superior to steel and concrete, Locke said, because it sequesters carbon and takes less energy to produce.

“There are so many benefits, it doesn’t matter which one you choose to start with,” Locke said.

First developed in Europe, mass timber is now catching on in the U.S., and Oregon is working to position itself as the industry hub, kick-starting rural economies that have traditionally relied on forest products. On Aug. 1, Oregon became the first state to approve language in its building codes allowing for wood-framed buildings up to 18 stories tall.

Albina Yard was the first building to use Oregon-made CLT as a structural element. Other examples of mass timber construction in Portland include Carbon 12, an eight-story condominium building on Northeast Fremont Street. Catty-corner to it across the street is One North, an 85,540-square-foot business complex.

Locke, who was hired by OFRI in 2015 to help develop markets and supply chain for mass timber, said he believes momentum will only increase as the projects gain wider recognition.

“People like wood. It’s a nice material,” Locke said. “It has a great environmental story, and a great aesthetic.”

CLT, a prominent example, has been described as “plywood on steroids.” It is made by gluing planks of wood in perpendicular layers, creating thick panels that can be used for walls and floors.

The first CLT buildings were constructed in 1993-95 in Germany and Switzerland, and the majority of production remains in Europe. The first U.S. commercial CLT building was completed in 2011 in Whitefish, Mont. D.R. Johnson became the first U.S. company certified by APA — The Engineered Wood Association — to make structural CLT panels in 2015.

A study by Grand View Research, a market research company in San Francisco, anticipates the global CLT market will be worth more than $2 billion by 2025, tied to demand for “green” homes.

The U.S. Senate in June added provisions to its version of the 2018 Farm Bill that would establish a federal research program for mass timber. Originally known as the Timber Innovation Act, the bill was sponsored by Sen. Debbie Stabenow, D-Mich., and co-sponsored by 19 other senators, including Republicans and Democrats from Oregon, Idaho, Washington, Montana, Minnesota, Maine and Mississippi.

“We think about the fact that we build these medium high-rise buildings out of concrete and steel,” Merkley said. “If we can open that market effectively to mass timber, then it could be huge.”

Locke describes himself as a “wood guy.” Before joining OFRI, he ran a marketing agency, Pipeline Public Relations, in Portland, serving clients in the construction industry.

Locke is the first director of forest products for OFRI, a position created in 2015 and partially funded by a two-year, $250,000 Wood Innovation Grant from the U.S. Forest Service. He said the job was a perfect fit.

“They wanted to promote Oregon wood products into commercial construction,” Locke said. “That has always made sense to me.”

First, Locke said, there are cost savings on construction and installation with mass timber. He explained how each floor panel at Albina Yard was installed in three hours, whereas with steel and concrete it would have taken twice as big a crew up to a week to do the job.

Then there is the environmental element. Production of CLT emits 26 percent less greenhouse gases than making steel, and 50 percent less than concrete. Carbon 12, the Portland condo building, also stores up to 577 metric tons of carbon dioxide in the wood — equivalent to taking roughly 105 cars off the road for one year.

CLT was initially developed to create a high-end use for lumber. Locke said it could also provide a market for small-diameter trees and the wildfire fuels building up in western forests.

Others, however, have tempered expectations. According to University of Washington and Washington State University researchers, the predicted demand for softwood lumber to manufacture CLT panels is still less than 1 percent of the annual Pacific Northwest timber harvest, making it a boutique industry at best.

Doug Heiken, conservation and restoration coordinator for the environmental group Oregon Wild, described CLT as a side product of the timber industry that would not change its overall carbon footprint. He said there is no guarantee wood for mass timber would come from sustainable forestry practices, and not industrial clear-cuts.

“Mass timber isn’t really that different from any other timber in that way,” Heiken said.

The main limiting factor, Locke said, are the international building codes, which are slowly being adapted to catch up to tall wood buildings.

In April, the International Code Council moved to update codes allowing for wood buildings up to 18 stories, although the proposed changes would not be adopted until 2021 at the earliest.

Oregon took the extraordinary step in August of adopting the recommendations under its Statewide Alternate Method — the first state to do so. Locke said mass timber has passed every required test and is proving to be just as safe as concrete or steel.

Such tests are conducted at the TallWood Design Institute, a collaborative research program of the University of Oregon College of Design and Oregon State University’s College of Forestry and College of Engineering.

“Urbanization is going to drive a huge demand for housing around the world,” Macdonald said. “Our role is to do applied research on this, to put together educational programs for stakeholders like architects, structural engineers and construction companies.”

Macdonald acknowledged fears about mass timber, especially regarding fire safety. Fire tests involve roasting panels in a furnace at 1,832 degrees Fahrenheit for up to two hours, and Macdonald said the results so far are promising.

While the surface does char, Macdonald said the interior of the panel remains insulated from the heat. He compared it to throwing a whole log onto a campfire, versus small pieces of kindling.

William Silva, pre-construction manager for Swinerton Builders — the Portland company that built the First Tech’s Hillsboro headquarters — said that as product testing and building codes come together fellow builders should get over their fears.

“It’s become more than just a progressive concept,” Silva said. “I see a lot of developers looking at this as a value proposition.”

Not everything has gone smoothly for mass timber development in Oregon.

Just outside Macdonald’s office at the OSU College of Forestry in Corvallis, work is underway on the new Oregon Forest Science Complex that will house the College of Forestry, TallWood Design Institute and replace Peavy Hall on campus.

The project is supposed to be a showcase building for the materials, but was hampered earlier this year by a costly and potentially dangerous setback. On March 14, two of seven layers in a third-story CLT panel measuring 30 feet long by 4 feet wide, weighing a half-ton, delaminated and fell 14 feet onto the second floor below. Panels for Peavy Hall were manufactured by D.R. Johnson.

Nobody was hurt, but the incident did bring construction to a halt while officials investigated what went wrong. Evaluations were conducted by the general contractor, Andersen Construction, as well as D.R. Johnson and APA — The Engineered Wood Association. OSU also hired KPFF Consulting Engineers of Portland as an independent consultant.

They determined D.R. Johnson employees erred when they pre-heated lumber in stacks outside during a period of cold weather before gluing them together into CLT. This caused premature curing of the adhesive, weakening the bond.

Valerie Johnson, president of D.R. Johnson Wood Innovations, said the incident was the product of a “well-intentioned, but unfortunate” change in the manufacturing process. She added the company has added quality control measures, and built a climate-controlled glue layup room in its facility to ensure delamination does not happen again.

“We are confident we have rectified the problem permanently and have an even better production process as a result,” Johnson said.

In its project specifications, OSU stipulates that CLT components for Peavy must be manufactured within 300 miles of Corvallis. D.R. Johnson is the only certified CLT fabricator that meets the requirement.

OSU spokesman Steve Clark said engineers are still determining how many panels already installed at the complex may need to be replaced. The project is divided into three zones, with Zone 3 needing 45 of 71 panels replaced. Analyses are not yet competed for Zones 1 and 2.

“Ultimately there is some expense and delay,” Clark said. The 95,000-square-foot complex is now expected to open by January 2020. The total cost is now $79 million, of which $30 million comes from state bonds, $38 million in donations and $11 million in university funding.

Despite the problem, supporters of CLT do not appear to be fazed. Clark said the university remains “very committed and confident” in the future of CLT. Locke described it as a “blip” in the process. Macdonald said it was an anomaly.

“We really have not heard about this happening on a CLT project around the world,” Macdonald said. “It’s good that this deviation in the manufacturing process was caught. We’re not concerned about the long-term impact.”

Set in the forested canyon near Lyons, Ore., Freres Lumber Co. has pioneered a new form of mass timber to sustain its business and 470 employees.

Tyler Freres, co-owner and vice president of sales, said the company received patents for its mass plywood panels earlier this year. He believes mass plywood is a more efficient product than CLT, using 20 percent less wood while holding up in every facet of construction.

“This is a truly unique facility,” Freres said. “We had to design all the processes ourselves.”

Freres, who lives in nearby Stayton, said the prosperity of local schools and communities is tied to the success of the timber industry. Mass timber can be a lifeline, he said, though it will require a more productive approach to thinning federal forests to boost volume.

In the 1970s, Oregon’s timber harvest totaled more than 8 million board-feet, according to the state Office of Economic Analysis. Today, the timber harvest has dropped by more than half that amount, and logging on federal lands is down nearly 90 percent.

Freres said mass plywood will be key to supporting his family’s business for another 100 years. He said the company receives many inquiries from builders interested in mass plywood.

“The potential is almost limitless,” he said.