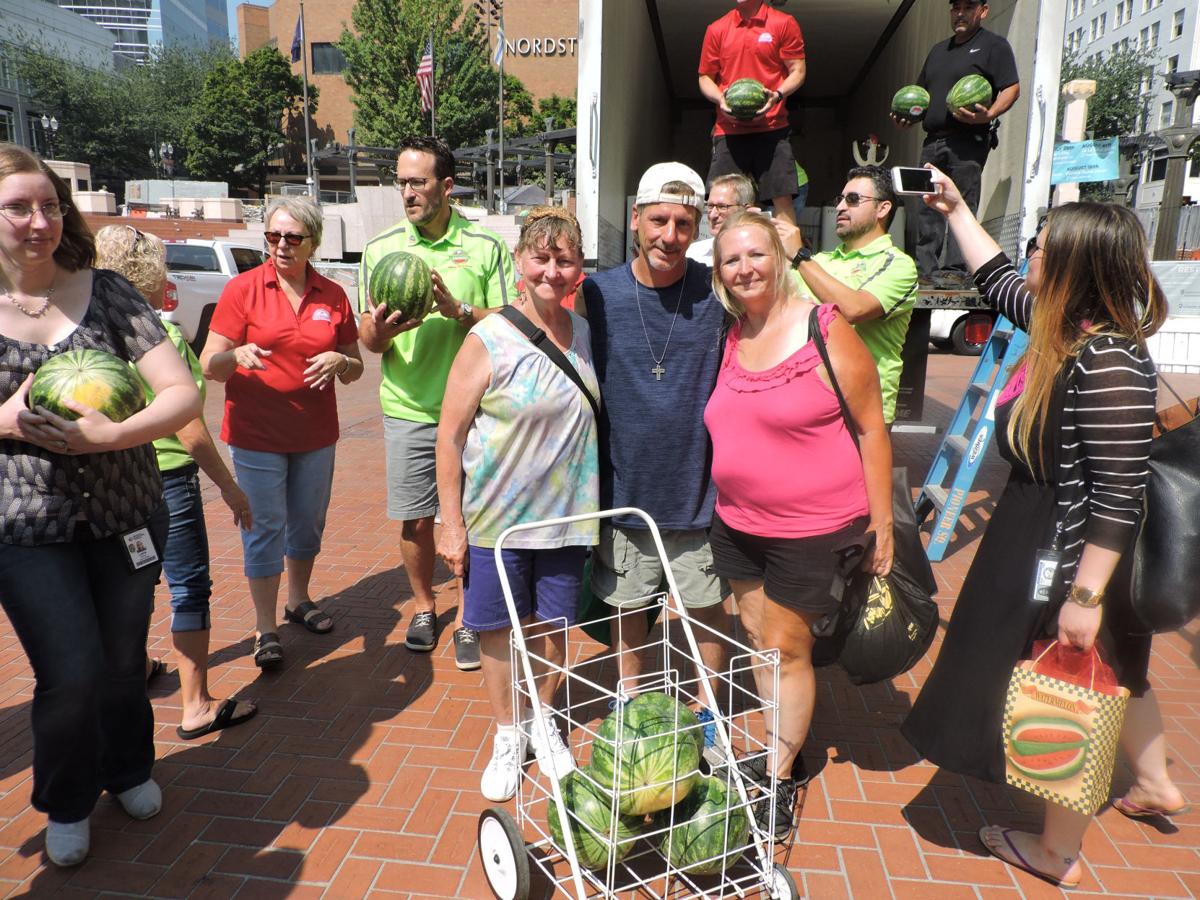 Kathy Leichleiter, Bill McKee and Brenda McSweeney were the first three in line to get a Hermiston watermelon at Portland's Pioneer Courthouse Square on Aug. 4. 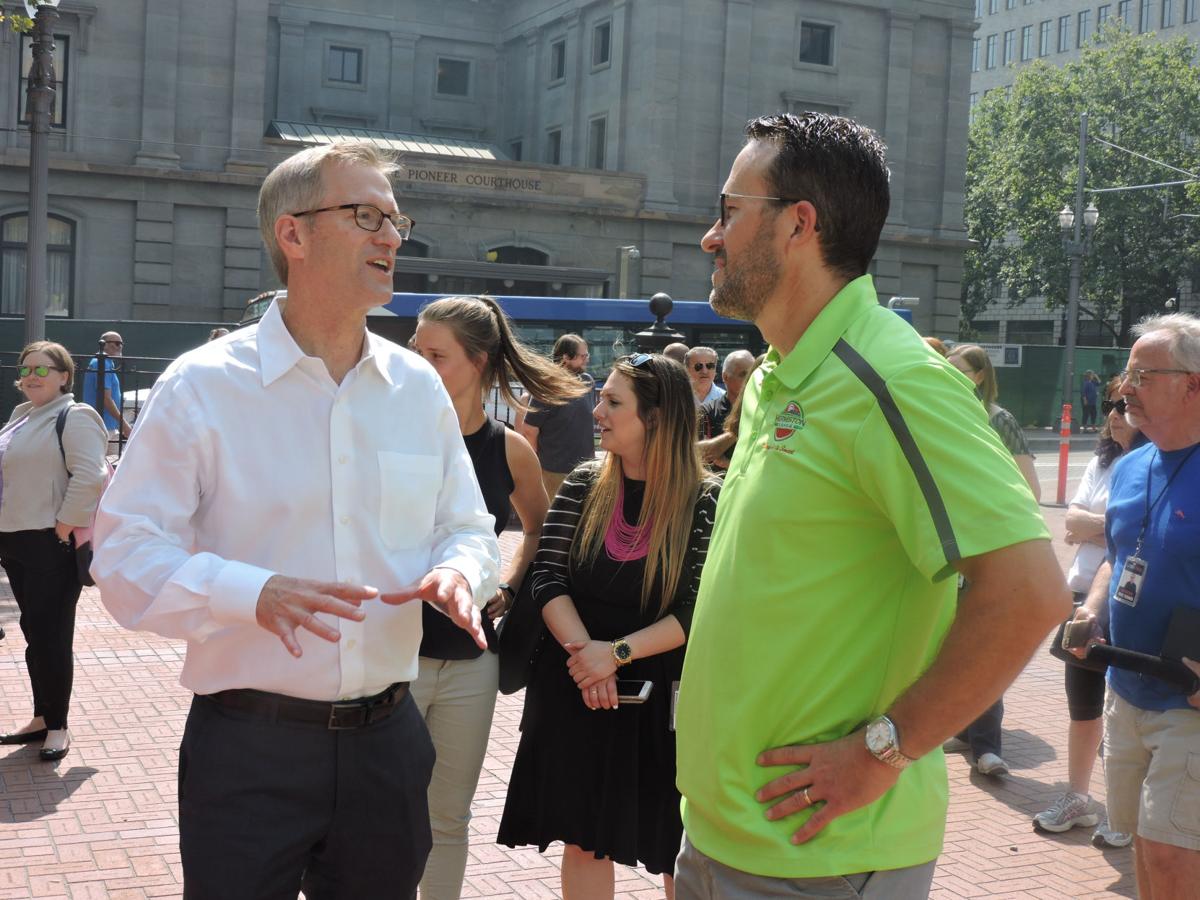 Portland Mayor Ted Wheeler chats with Hermiston Mayor David Drotzmann before the two faced off in the watermelon seed-spitting contest Aug. 4 in Portland. 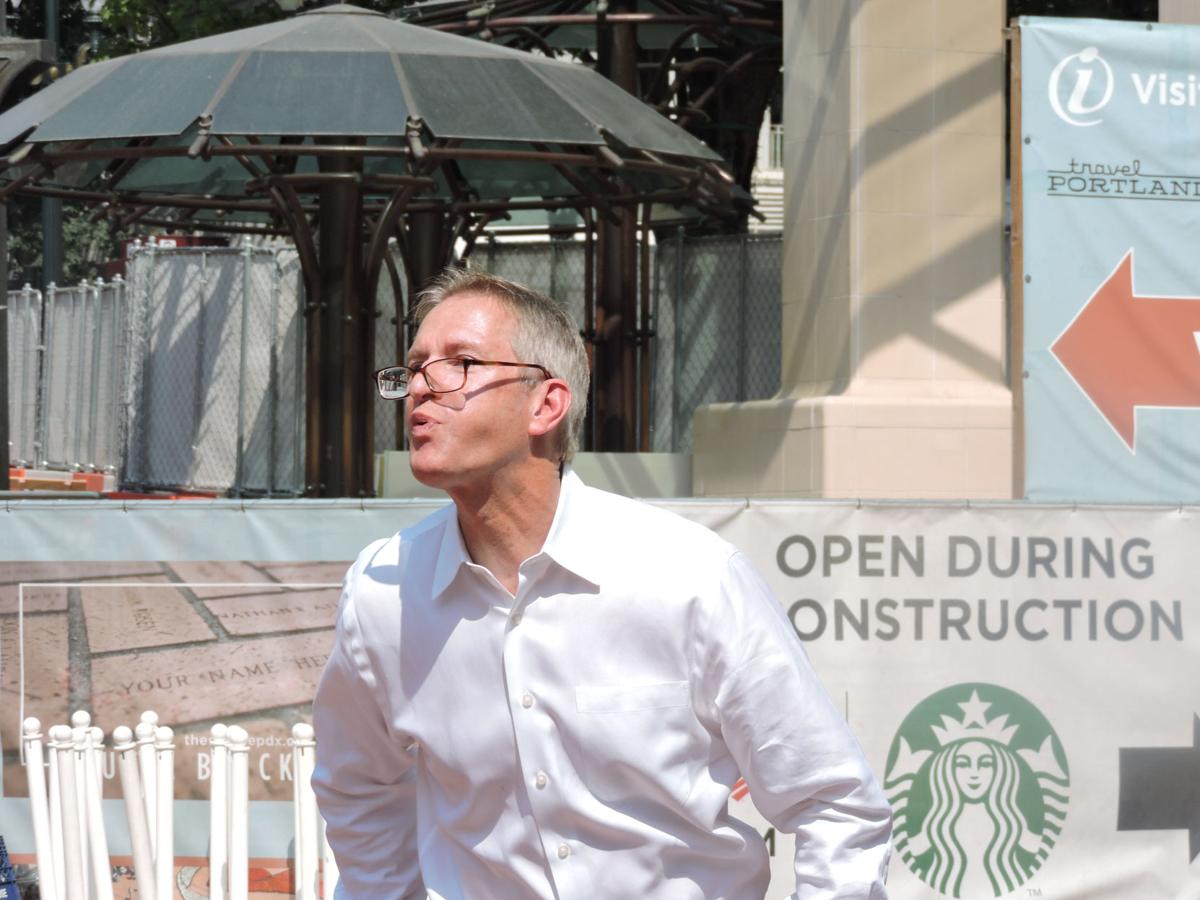 Portland Mayor Ted Wheeler spits a watermelon speed in his first ever watermelon seed-spitting contest at the Hermiston watermelon giveaway on Aug. 4. 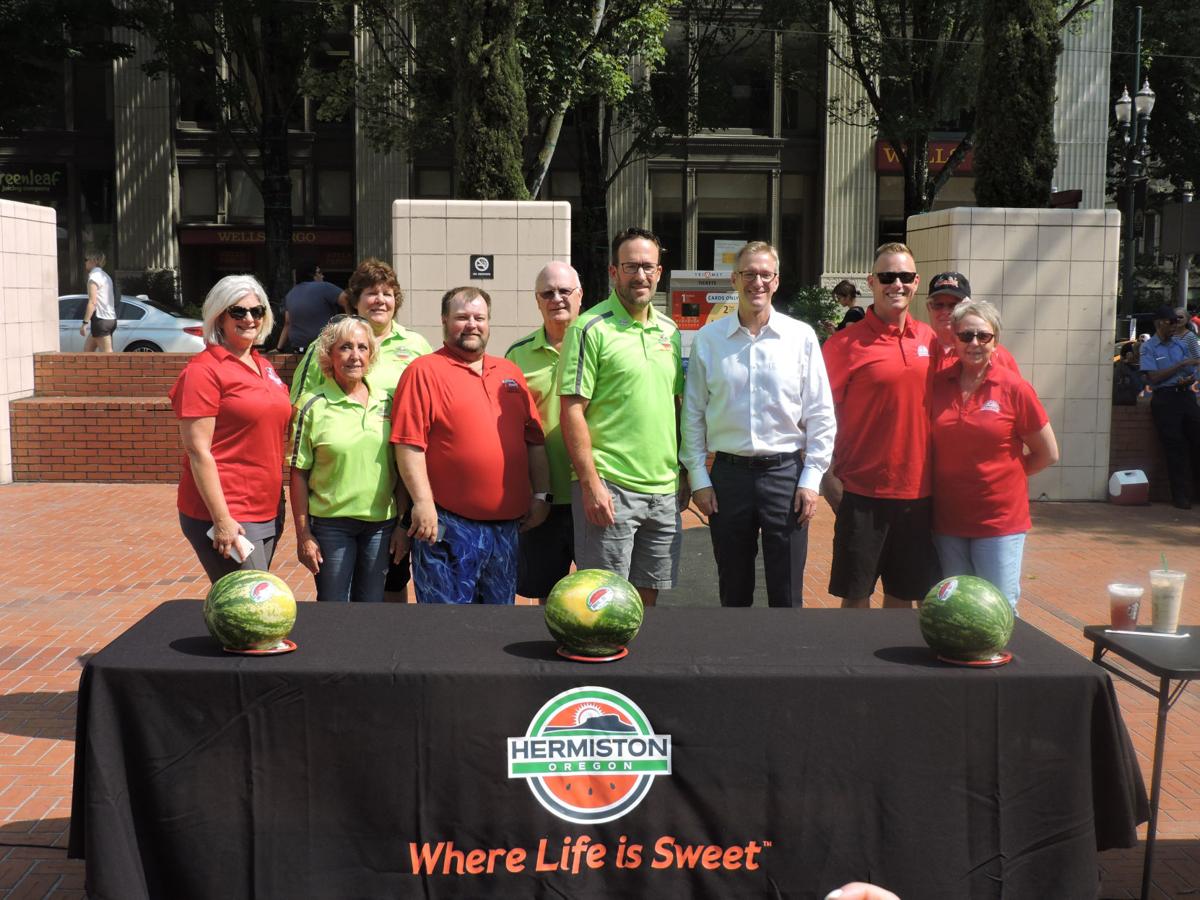 Kathy Leichleiter, Bill McKee and Brenda McSweeney were the first three in line to get a Hermiston watermelon at Portland's Pioneer Courthouse Square on Aug. 4.

Portland Mayor Ted Wheeler chats with Hermiston Mayor David Drotzmann before the two faced off in the watermelon seed-spitting contest Aug. 4 in Portland.

Portland Mayor Ted Wheeler spits a watermelon speed in his first ever watermelon seed-spitting contest at the Hermiston watermelon giveaway on Aug. 4.

“I understand Mayor Wheeler has never done this before, so we’ll give him a practice round so he doesn’t get embarrassed by us professional seed-spitters,” Drotzmann said, to laughs from the crowd.

“Normally, when doing something this important I’d have practiced,” he said, “But I’ve never spit a watermelon seed. You’d better win,” Wheeler he told his Hermiston counterpart, “Or you’re not going to have a job in Hermiston!”

Based on Wheeler’s comment, Drotzmann can keep his job, after he launched a seed past the one Wheeler spit, but not without a twist: both men were beaten by Wheeler’s director of strategic partnerships, Jennifer Arguinzoni, who stepped in at the last minute to participate.

Each mayor also spoke briefly about the event, to a crowd that had gathered to collect the free watermelons that some Portlanders have come to anticipate each summer.

“These are the best watermelons in the world and there’s no reason to get melons shipped from anywhere else,” Wheeler said.

“Hermiston is a thriving city,” he said. “While we think of watermelons, there’s lots of good employment opportunities. They’re working very hard under this mayor on economic prosperity. It’s good to take a fun day like this and remember that we are one state.”

Drotzmann, too, said he was glad to be showcasing Hermiston’s most famous crop on the west side of the state.

“Normally when we’re here, we’re a hundred deep,” he said. “We’ve got a lot of good produce to give away.”

Debbie Pedro, president/CEO of the Hermiston Chamber of Commerce, estimated that they were giving away nine bins of melons, each of which contained between 20 and 30 melons.

Drotzmann added that partnering with Portland was important for both cities.

“It’s interesting because Portland is larger than us by about 650,000. So we think they have different issues — but when we sit down with them,, the issues we have are very similar. We’re thinking about economic development, public safety, housing, water. How do we, as a state, continue to be prosperous?”

Though the crowd wasn’t as thick as some councilors recalled in past years, there was a steady stream of people throughout the giveaway. Burns stood at the corner of Pioneer Courthouse Square, advertising the presence of free melons to Portlanders walking past, which brought in several waves of eager customers.

Some, though, came prepared.

Kathy Leichleiter and Brenda McSweeney were the first ones in line, waiting with a small cart with wheels.

McSweeney said she buys Hermiston melons when she can, and that her family loves the fruit.

Wheeler was scheduled to meet Drotzmann, Hardin and Meyers for dinner on Thursday night, but canceled about an hour before due to a Portland City Council meeting that ran long.

“We take public comment, and it included use of force issues,” Wheeler said of his absence. “Unfortunately, I was not able to go to dinner.”

Though this was Wheeler’s first watermelon giveaway event as mayor, many of the Hermiston councilors and representatives have been coming for years.

“Over the years, we would have people up in their offices, looking down on the square and waiting for us to get out here,” Pedro said. “We’ll recognize people who’ve been coming for years.”

“It’s very important to share the concerns we have in rural areas and they get to let us know what’s going on here,” she said. “When it comes to economic development, it’s really exciting to have friends across the state.”

The event, which was started in 1991 by former Hermiston Mayor Frank Harkenrider and former Portland Mayor Bud Clark, petered out in the late 2000s, and was revived three years ago by Drotzmann and then-Portland Mayor Charlie Hales.

Drotzmann remembered Harkenrider, who passed away late last month, in his opening remark at the events.

“He never knew an enemy,” Drotzmann said. “He served on our city council for over 50 years, and he was the pioneer of this event.”

Hardin remembered some of the earlier events, and the two flamboyant founders of the watermelon giveaway.

“Bud was kind of a controversial mayor,” he said. “I think they (Harkenrider and Clark) were a perfect fit. One from a small city, one from a big city. But both, you never knew what was going to come out of their mouths.”

He recalled one particular gathering, a few years ago.

“Bud Clark rode his bicycle to the event, and he showed up with a watermelon (bicycle) helmet,” Hardin said. “That was the last one they were at together.”

Hardin said the event is a good way to remind people in Portland of the role the east side of the state plays in their daily lives.

“It’s mainly to remind them, most of your food comes from our direction,” he said.