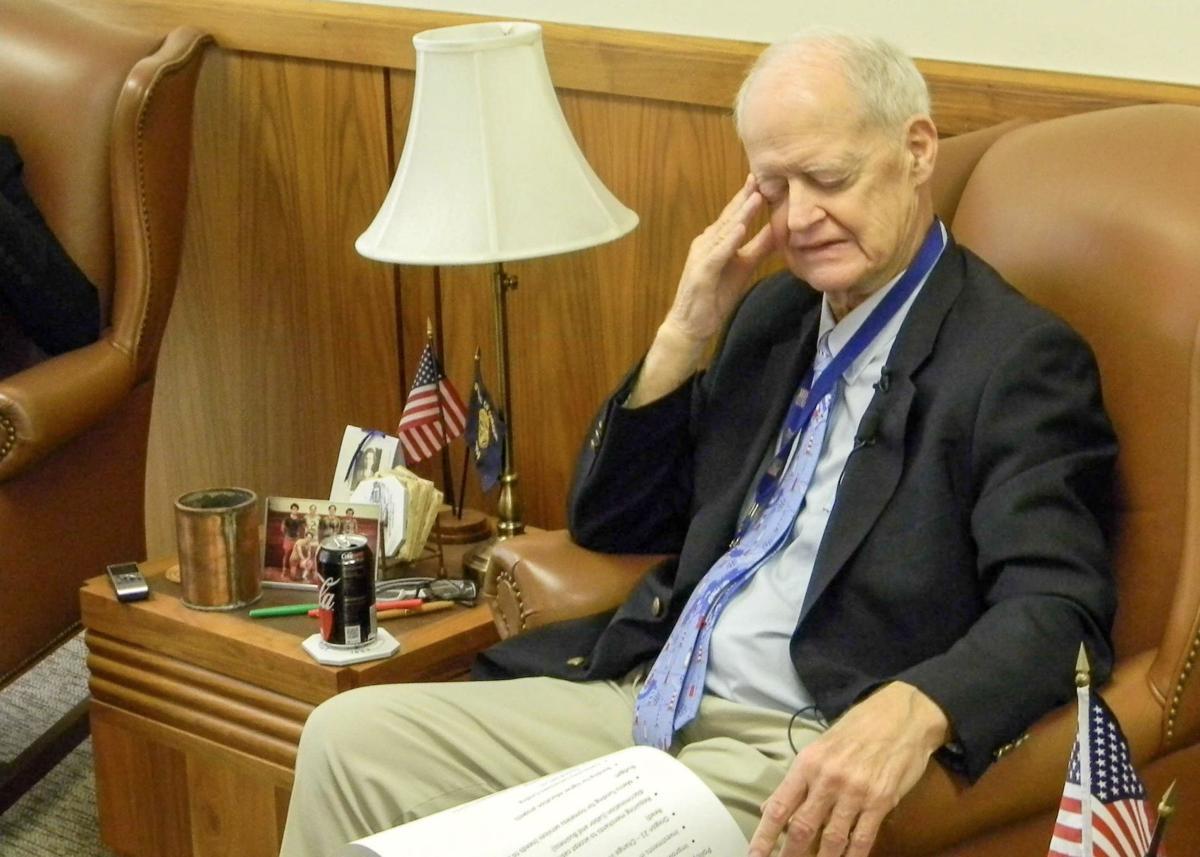 Senate President Peter Courtney reacts to the walkout by Senate Republicans while fielding questions from reporters in his office Monday, Feb. 24 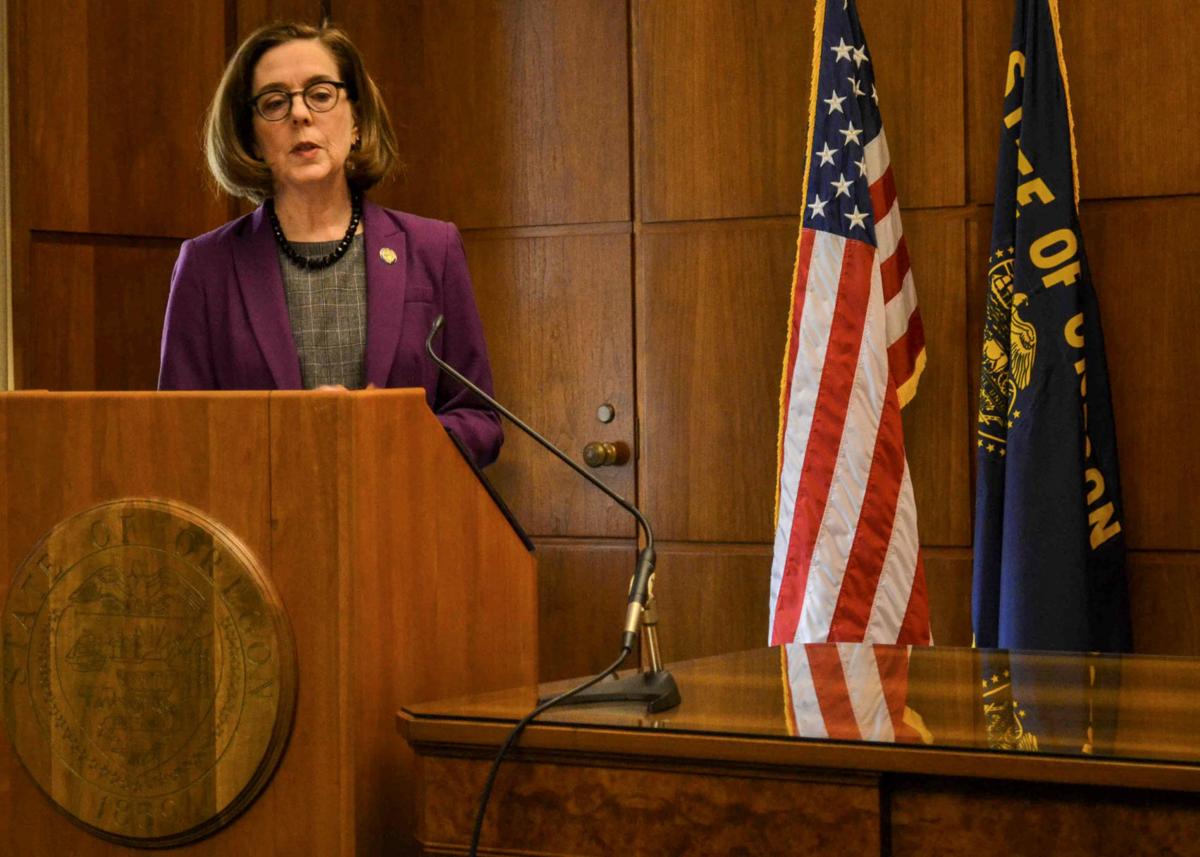 Senate President Peter Courtney reacts to the walkout by Senate Republicans while fielding questions from reporters in his office Monday, Feb. 24

SALEM — The Oregon Senate came to an abrupt stop Monday when 11 of its Republicans disappeared.

For the second time in less than a year, they left the Capitol to protest a bill to cut the state’s greenhouse gas emissions. Their departure prevents the Senate from taking votes.

The senators’ departure — or, as Gov. Kate Brown put it, a “taxpayer-funded vacation” — was long anticipated around the Capitol, ever since lawmakers convened in early February for a 35-day session that must by law finish on March 8.

The walkout throws into doubt the last two weeks of this year’s session. It could derail, or at least postpone, proposals to ease the state’s homelessness crisis, boost funding for state troopers and tighten the state’s gun laws.

Brown told reporters that the walkout jeopardizes legislative work that could provide relief to the flood-ravaged Umatilla basin as well as money for community corrections.

The question, now, is what happens next. If Senate President Peter Courtney, D-Salem, asks her to, Brown can call on the Oregon State Police to bring the wayward legislators back. But that’s an option Courtney has shown no appetite for.

Courtney, the longest-serving Senate president in Oregon history, held court in his Senate office after Monday’s flop of a floor session, fielding reporters’ questions from a cognac-colored armchair.

“We need the state troopers out there taking care of Oregonians, not running around, looking for public officials and trying to talk them into coming back here,” Courtney said.

The governor could later call a special session, which would have no mandatory end date, unlike the current session. But if there is a specific game plan, Brown was not telling.

“I think we want to let the next couple weeks play out,” said Nik Blosser, Brown’s chief of staff. “And then we'll see.”

Republicans have been grousing over Senate Bill 1530, which aims to cap and shrink the state’s greenhouse gas emissions by creating a market for emissions allowances, which are essentially permits for companies to pollute. The idea is to nudge the economy away from fossil fuels and toward renewable sources of energy.

In a rare move Monday morning, Courtney took a seat on the legislature’s budget committee and voted to advance it.

Despite Republicans’ persistent hints that they would walk out over the past several weeks, Senate Republican Leader Herman Baertschiger, Jr., pointed at Courtney’s maneuver as the trigger for the boycott Monday.

“Senator Courtney’s actions leave no other option for Senate Republicans but to boycott and deny quorum because cap and trade is on the way to the Senate floor,” said the Grants Pass Republican in a statement. “Democrats refused to work with Republicans and denied every amendment that was presented. Pay attention Oregon – this is a true example of partisan politics.”

Democrats, meanwhile, counter that they have made a slew of changes to the plan since last year. For instance, the current plan frees companies who import fuel into most rural counties from having to pay for emissions allowances, which proponents say could spare rural drivers from higher prices.

The tone from Democrats was a mix of indignation and grandiose mourning. The deceased: democracy itself.

The governor said that Senate Republicans who walked out were “against the democratic process,” noting that this was the third legislative walkout they have engineered in the last 10 months.

She and Democratic members of the Legislature, who hold a supermajority in both chambers, had been elected on the issue of climate change, Brown said.

Since the last walkout, she had listened and “bent over backwards” to make compromises, while being in “constant communication” with Senate Republicans.

“I think from the governor's perspective, more than this bill is at stake,” Blosser said. “A functioning democracy is at stake. And (Republicans are) acting like they want to be in the super minority forever. They're acting like they don't want democracy to function for the vast majority of Oregonians.”

Both Courtney and Brown said they talked with Baertschiger over the weekend.

The governor isn’t reaching out to Republicans now that they’re boycotting the session, but she’s happy to talk to them if they come back to work, Blosser said.

“We took them at their word that they had concerns with the bill,” Blosser said. “We had countless meetings and made countless changes to it. And we just need to get that out there. This is a different bill. We did listen to all these constituencies. We did make all these changes.”

Opponents could pursue a ballot initiative to challenge the law after it goes into effect, Dembrow said. But he said that such legislation was best left to lawmakers who could navigate complex issues and reach compromises.

“This is more than about the bill,” he said. “This is about the state of politics and I think a certain amount of contempt for the system that’s out there.”

The fate of other legislation now is unclear, as some are parked in committees where they could be left to die or revived at any point.

A bill must pass both the House and Senate to be put into state law.

The Legislature’s policy committees will continue to meet. The House convened shortly after the walkout, as if nothing was amiss.

Although the Senate can’t take votes, the gears of the legislative branch will grind on at a cost to taxpayers that in 2018 amounted to about $14,300 per day, according to the Legislative Fiscal Office.

As of Monday afternoon, only three bills have cleared both chambers. They include a proposal to raise the surcharge on cultural trust license plates, a requirement for the state Education Department to develop educational programming on concussions and allowing cities in Clackamas County to withdraw from the county’s parks and recreation service district.

Forty bills have been passed by the House and await movement in the Senate, whether to be read or assigned a committee hearing. That number will continue to grow as the House meets and passes bills on for consideration by their Senate colleagues.

Senate Republicans have fled with at least seven of their personal proposals still in play.

They include a bill from Sen. Tim Knopp, R-Bend, to freeze property taxes for seniors, Baertschiger’s bill to modernize the state Forestry Department, and a plan from Sen. Bill Hansell, R-Athena, to improve groundwater quality in the Umatilla Basin.

It’s not like Democrats didn’t see this coming. Republicans have been saying for weeks that they could get out of Dodge.

And there’s evidence it’s not just a bluff, either: last year, Republicans walked out twice. First, in May, to protest a bill that raised business taxes to increase money for public schools. To bring them back, Brown gave up on a bill to tighten gun laws and another to tighten immunization requirements for public school students.

A little more than a month later, Senate Republicans walked out again, moving across state lines and out of reach of state troopers to protest an earlier version of the plan to restrict greenhouse gas emissions. That action drew national headlines and spurred a surge of passionate opposition by loggers and log truck drivers, who circled the Capitol Monday morning.

Last year, Republicans came back after Courtney declared he didn’t have enough Democratic votes anyway to pass the climate legislation.

Now, though, 17 Democrats favor the greenhouse gas legislation, one more than needed to pass the bill, Courtney said.

“And that is not going to change,” Courtney said.

When asked if there was anything Democrats could have done to prevent Monday’s development, Senate Majority Leader Ginny Burdick, D-Portland, skipped any blame, saying, “It’s not our responsibility. It’s their responsibility to do their job.”

“I started this process in the minority, and I worked really hard to get my district’s interest represented in bills. I spoke out forcefully on bills I didn’t like,” Burdick said. “That’s the way the process works.”

Courtney said that had Democrats promised a statewide vote on the climate plan, the Republicans would have stayed put.

“I am convinced that if we had added it, we wouldn't be in the face of a walkout,” Courtney said of the referral. “But that was one of those die on the hill type of issues for both sides.”

Courtney said that’s when he knew Democrats and Republicans had reached an impasse.

“Sometimes you just have to go to, I don't want to say war, but you just have to say, 'All right, it's time these two powerful forces collide,’” Courtney said. “And so that's the only way it gets resolved, even though, sadly, its results are sometimes very painful.”

Knopp was the only Republican senator who stayed behind.

After the Senate adjourned, Knopp said he remained because he wanted to continue working on changes to the state’s commercial activities tax, a bill he sponsored giving tax relief to seniors and other legislation affecting his district.

“I can’t do that work outside the building,” he said.

Letter: Why we all should use face coverings