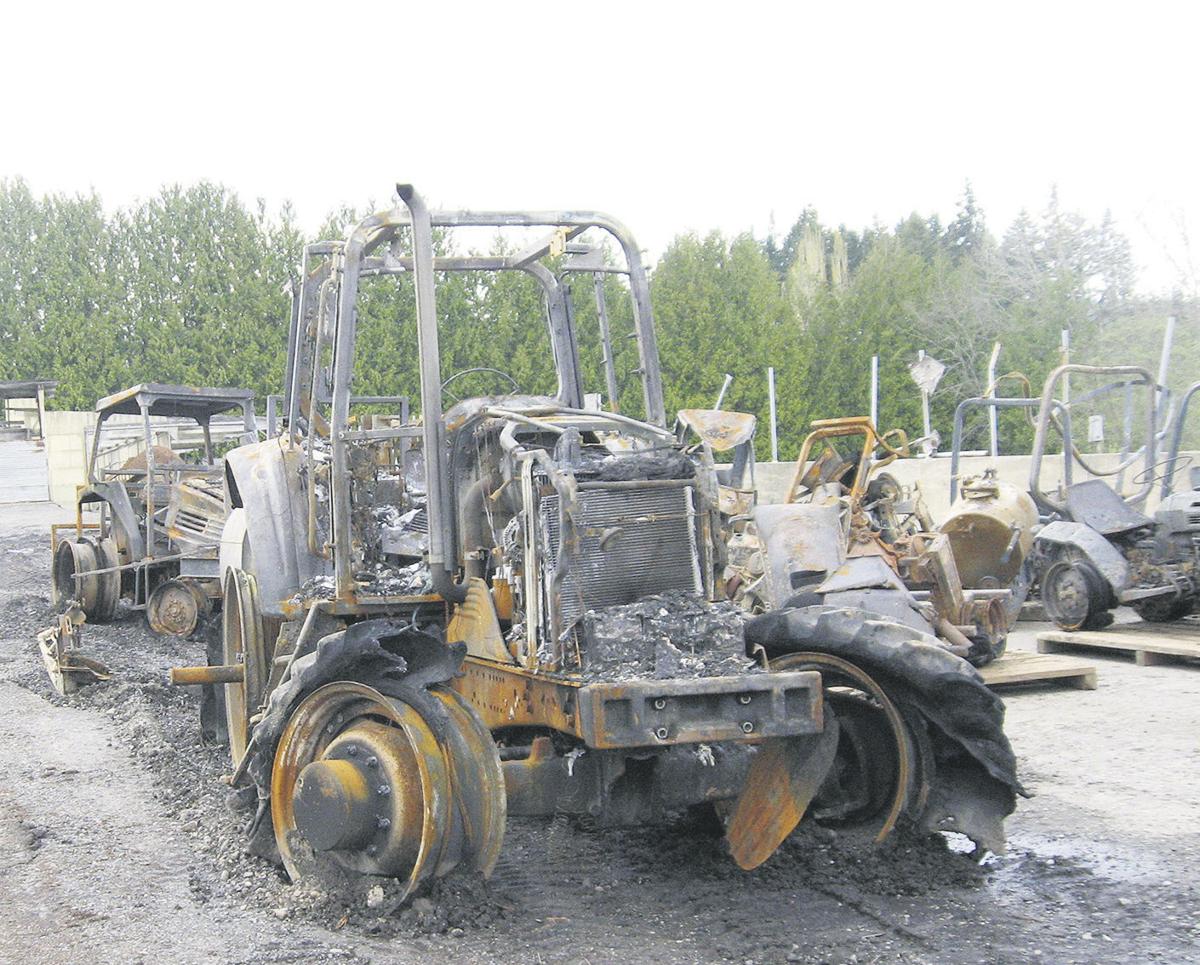 of Debi Dillard-Ward Fourteen of the nurseryÕs tractors were lost in the three-alarm fire that destroyed the nurseryÕs warehouse, office and propagation house. 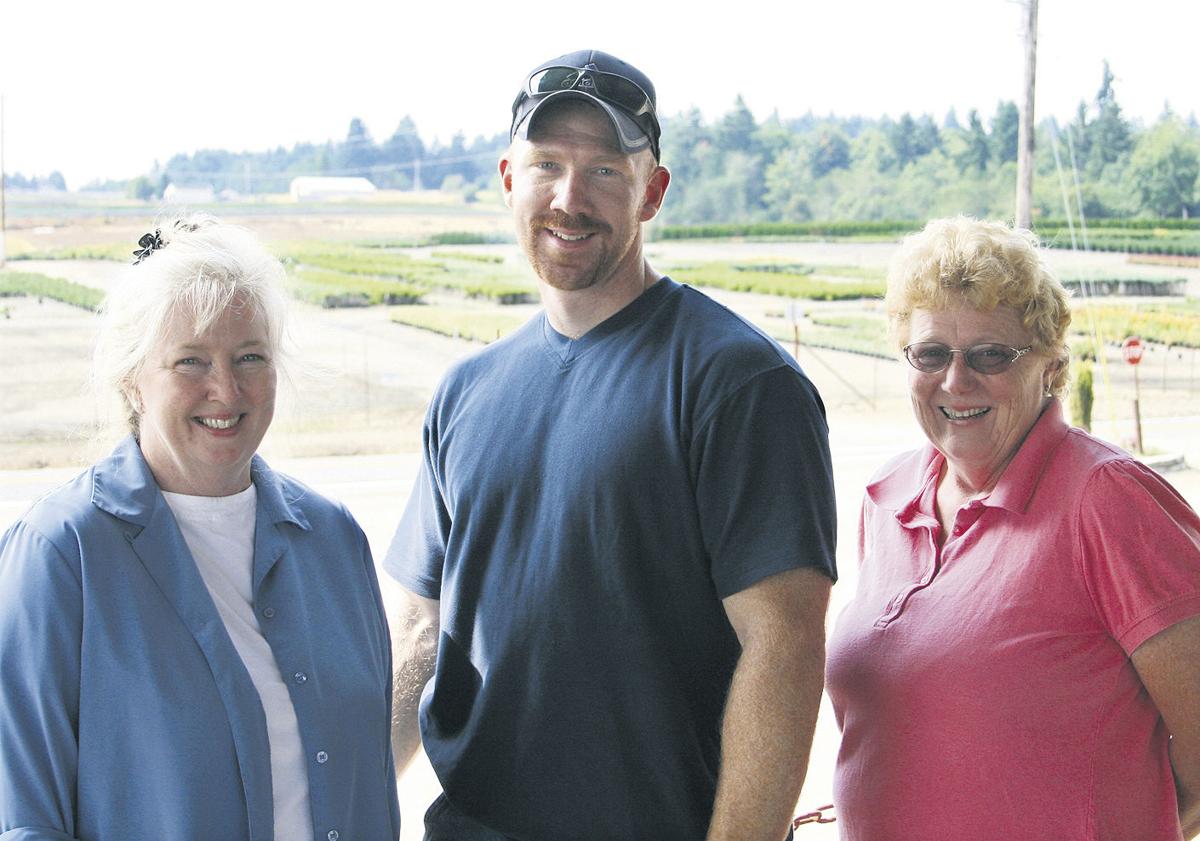 Candice Ruud/Capital Press From left, Teri Dillard, her son Kristian Veselik, and her sister Debi Dillard-Ward stand in front of the shipping office at William Dillard Nursery in Damascus, Ore. Aug. 5.The Dillard family is back on its feet and ready to rebuild after a fire devastated part of the 50-year-old operation in March.

of Debi Dillard-Ward Fourteen of the nurseryÕs tractors were lost in the three-alarm fire that destroyed the nurseryÕs warehouse, office and propagation house.

Candice Ruud/Capital Press From left, Teri Dillard, her son Kristian Veselik, and her sister Debi Dillard-Ward stand in front of the shipping office at William Dillard Nursery in Damascus, Ore. Aug. 5.The Dillard family is back on its feet and ready to rebuild after a fire devastated part of the 50-year-old operation in March.

In rebuilding, family nursery looks to future of business

DAMASCUS, Ore. -- It takes more than a few strokes of bad luck to destroy a three-generation family business.

Amid weathering an economy that has wreaked havoc on the nursery industry, William Dillard Nursery lost 45 greenhouses to heavy snow pack in December 2009. Then in March, its office, propagation house and warehouse were destroyed in a three-alarm fire.

Now, the Dillard family is taking time to reflect on the last 50 years in business while looking forward to the next 50.

Founder William Dillard, now retired, grew up working on farms in Texas, and followed good soil and crop trends to Western Oregon. He soon married Betty, an Oklahoma native, and they started a family. They founded the nursery together in 1960 on one acre on Glisan Street in Portland.

In 1965, they moved to the current location in Damascus, where they started with five acres. From there, they continued to expand through the 1970s.

Today, William Dillard Nursery operates on 320 acres and specializes in grafted conifers and maples in more than 150 sizes and varieties, selling to re-wholesalers and independent garden centers.

To commemorate the nursery's milestone anniversary, William and Betty's adult children -- now the owners -- originally had plans for a big celebration on July 11, William's 78th birthday.

But after a fire swept through the nursery office the evening of March 25, they decided to put the idea on hold.

"We don't have a facility for it now," said Teri Dillard, William and Betty's first-born, who co-owns the nursery with her brother, Mike Dillard, and sister, Debi Dillard-Ward.

The fire was caused by an electrical short in the warehouse ceiling, Teri said. Smoke began to billow out of the office at around 5:30 p.m., after everyone had left the nursery for the day. Neighbors were the first to see the smoke and called the fire department.

While only about a quarter of one acre was burned, damage was estimated at $1.5 million, Teri said. Fourteen tractors, as well as other equipment, were destroyed.

As they watched firefighters attack the blaze that had enveloped the heart of their operation that Thursday night, Teri and Debi thought they were doing a good job keeping their composure. So they were surprised when the Boring Fire Department called in a trauma unit.

"You know it's bad when they call in the trauma unit," Debi joked at first. "But fire is emotional. It eats everything. That was decades and decades of our lives."

Teri nodded. "It's hard to watch a building you've probably spent 80 percent of your life in burn down," she said. "That area is very sacred to us."

Despite the devastation, William Dillard Nursery was open for business the next morning. The owners credit the quick, efficient work of the fire department for being able to save most of the computers and the server, allowing them to continue the business the next day.

"We had a tragedy in the peak of our shipping season," Teri said. "We had to walk away from the fire for 90 days and finish shipping."

Since then, they've been doing business from the shipping office, a building about one-tenth the size but "perfectly adequate," Teri said.

While the family went back to work, the community rallied. The morning of March 26, Moen Machinery and Fleming Nursery brought farming equipment over for the family to use free of charge. Neighbors brought huge orders of coffee by the farm and offered support. Dan Carney, the nursery's insurance agent, came by and helped the Dillards get their affairs in order.

"We had several neighbors -- probably 50 people -- that called and said, 'What can we do to help?'" Teri said. "When something like this happens, it brings humanity to its best."

Still in the aftermath of the fire, William Dillard Nursery is focused on reflecting, rebuilding and moving into the future without skipping a beat.