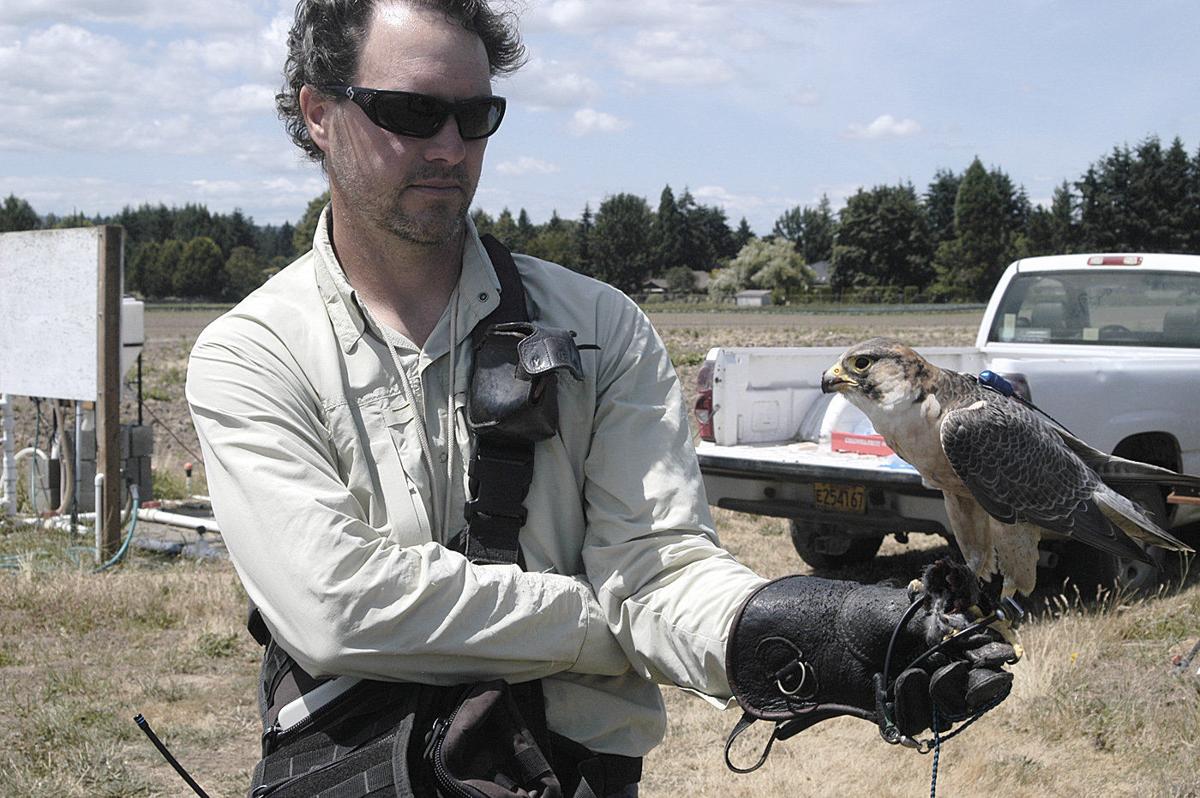 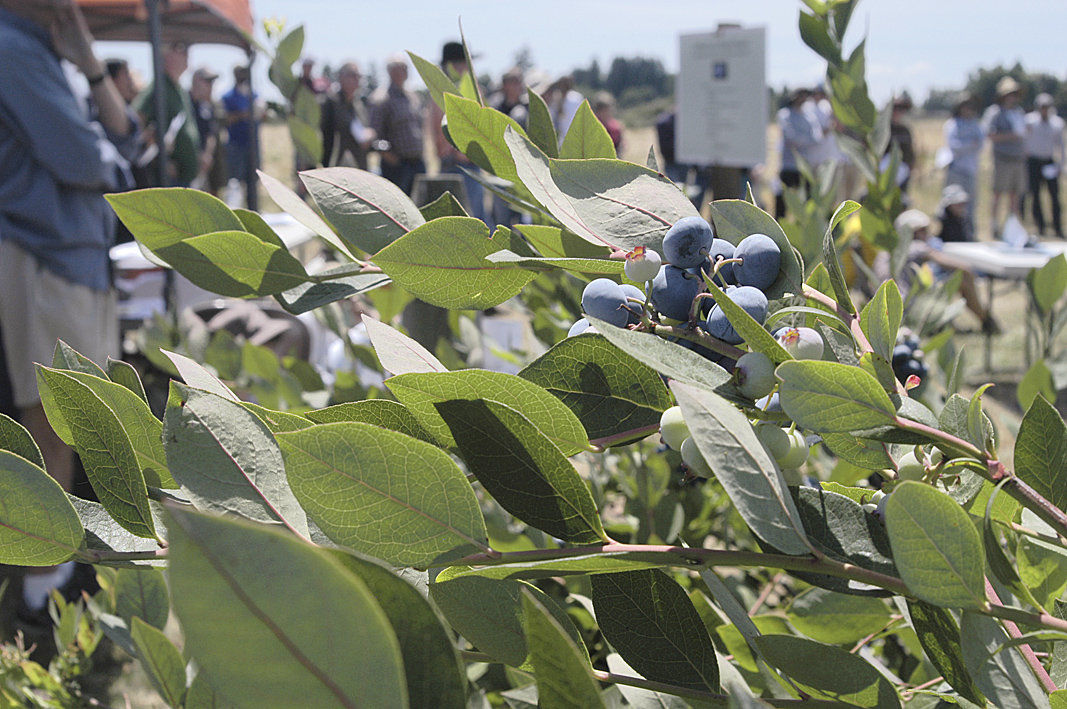 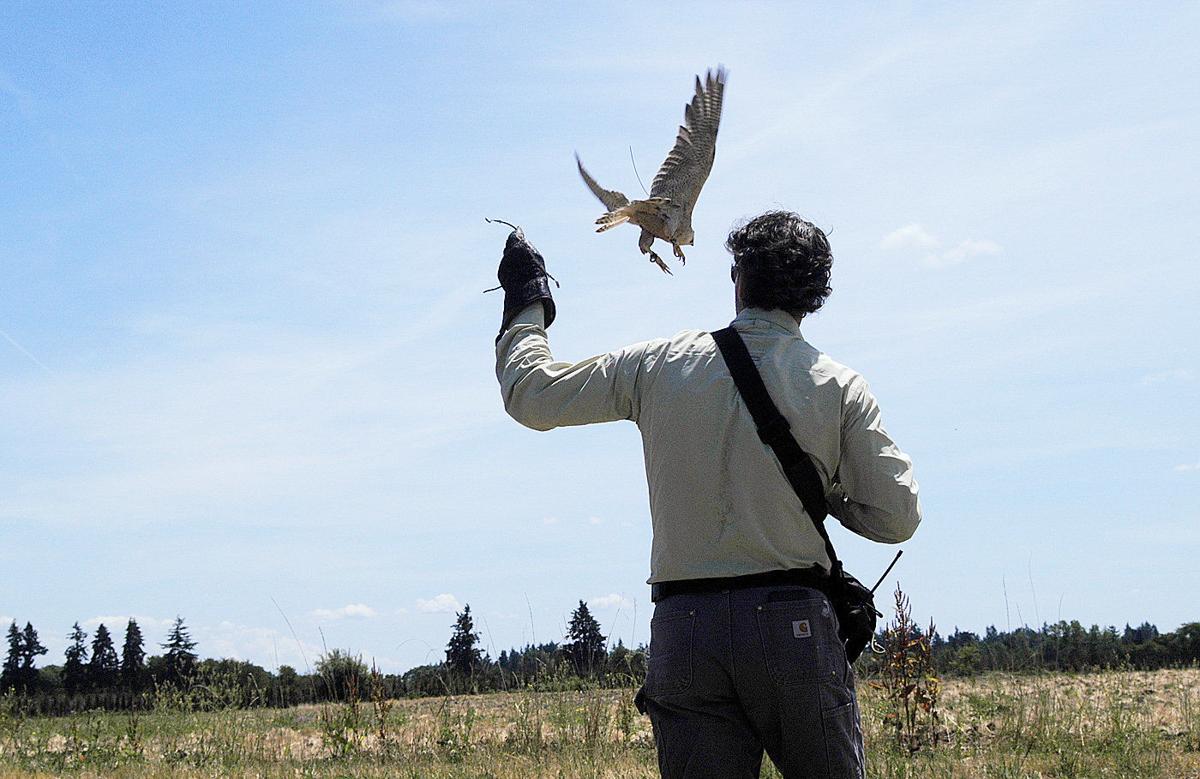 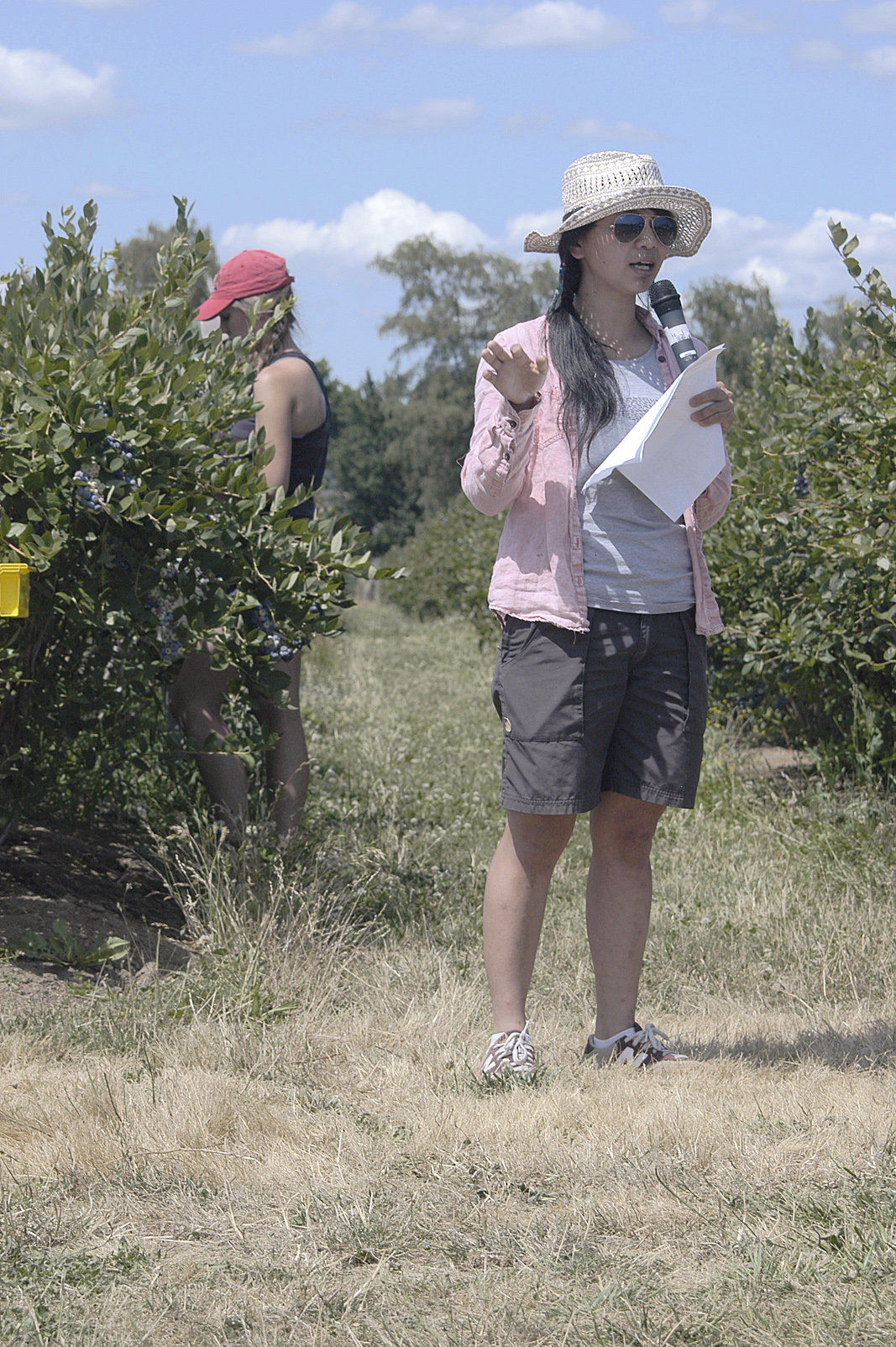 AURORA — Blueberry Field Day at Oregon State University’s North Willamette Research and Extension Center included the expected technical discussions of fertilizers, pesticides and cultivars, but then a bird swooped in and stole the show.

That would be Copper, a fierce-eyed falcon trained to scare the bejeebers out of pest birds that damage blueberries, wine grapes or orchard crops. Falconer Kort Clayton, owner of Integrated Avian Solutions, let Copper loose for a demonstration flight during a field day presentation on bird control options. Compared to Copper’s buzz bomb performance, discussions of humic acid and boron applications barely stood a chance.

Copper, a 4-year-old Red-naped Shaheen, is one of Clayton’s five falcons and the one that usually accompanies him to field demonstrations. “He’s super reliable,” Clayton said. “He’s a flashy flier, he’s not really bothered by crowds.”

There was more to Copper’s appearance than show, because bird damage is a major problem for fruit and berry producers. Growers across the country use chemical repellents, netting, noisemakers and pulsating lasers to keep birds out of fields, with mixed results.

Cornell University estimated that 10 percent of the U.S. blueberry crop is lost to bird damage. In Oregon’s blueberries, a crop worth $102 million annually, the loss can be significant.

To scare or discourage bird, growers use such things as propane cannons, flagging or netting. During the field day bird abatement presentation, company representative Rick Willis described the Bird Gard system, which is in place at the OSU research plots. The system’s microprocessor, which can be powered by a solar panel, plays robin and starling distress calls, and the call of predatory red-tailed hawks — all of which unnerve pest birds.

The system, mounted on a swiveling tripod, can be moved from place to place, and a hand-held model is available.

Clayton’s falcon, however, was the hit of the presentation. Copper, released from his perch on Clayton’s gloved hand, immediately swooped low over the OSU blueberry plots, then ascended in a corkscrew pattern until he was nearly out of sight. Clayton said falcons’ vision is 10 times better than humans’, and he’s called birds in from 3 miles away by swinging a lure. The birds wear a GPS transmitter, enabling Clayton to know where they’ve been.

The problem with other bird abatement systems, he said, is that pest birds eventually learn they won’t be harmed and are no longer frightened away. But they immediately recognize and react in terror to predators such as falcons, Clayton said.

“Habituation is the Achilles’ heel of traditional bird control techniques,” he said. “Pest birds do not habituate to natural predators.”

Clayton said falcons work best in fields of 80 acres or more. Falcons occasionally kill birds they’re chasing, but primarily deter pests by hazing them. The service typically costs $20,000 to $30,000 per season, he said.

“Once the birds get a taste, it’s impossible to get them out,” she said