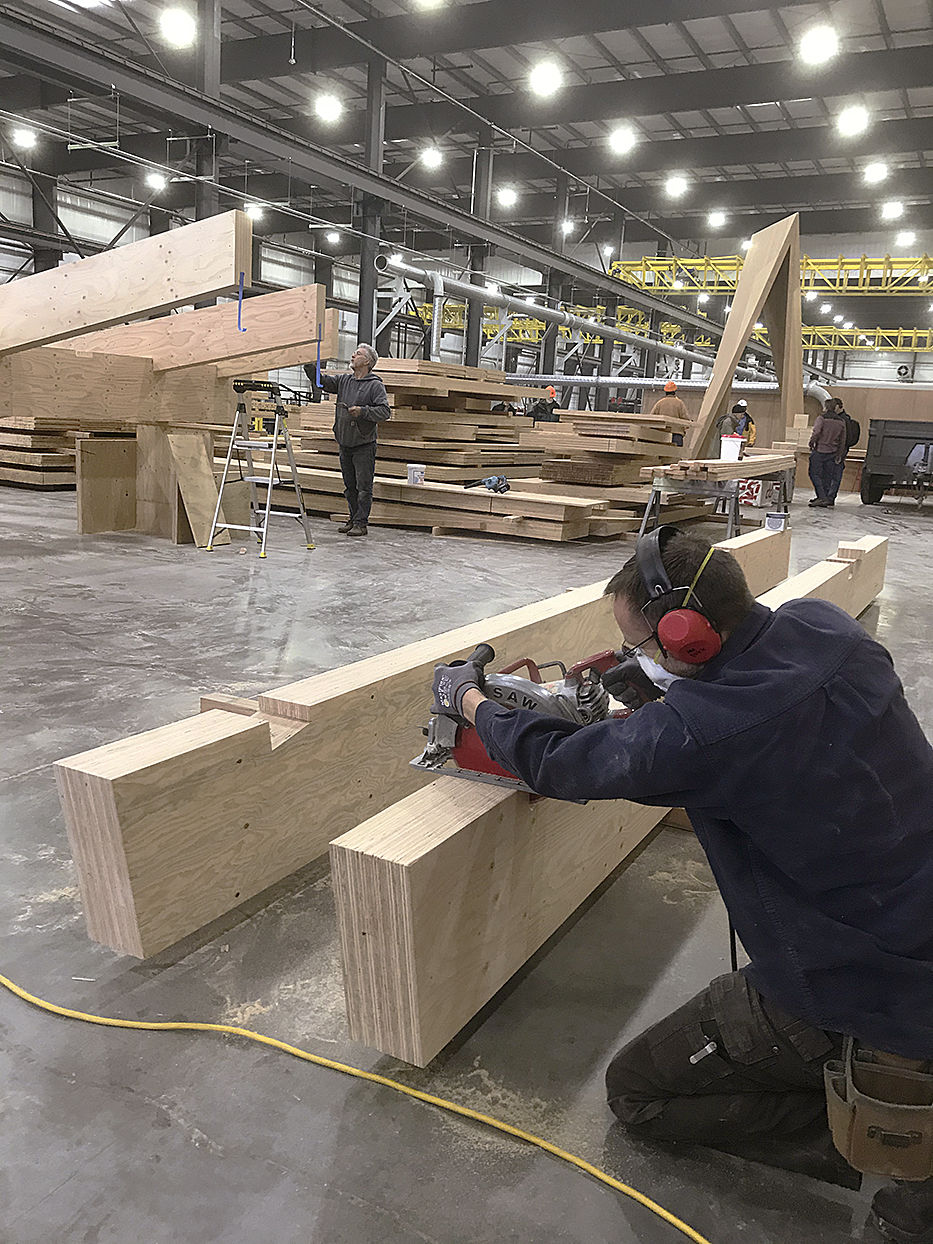 Workers prepare mass timber structural components that are manufactured by Freres Lumber Co. Mass plywood panels and similar products are catching on in the building trade. 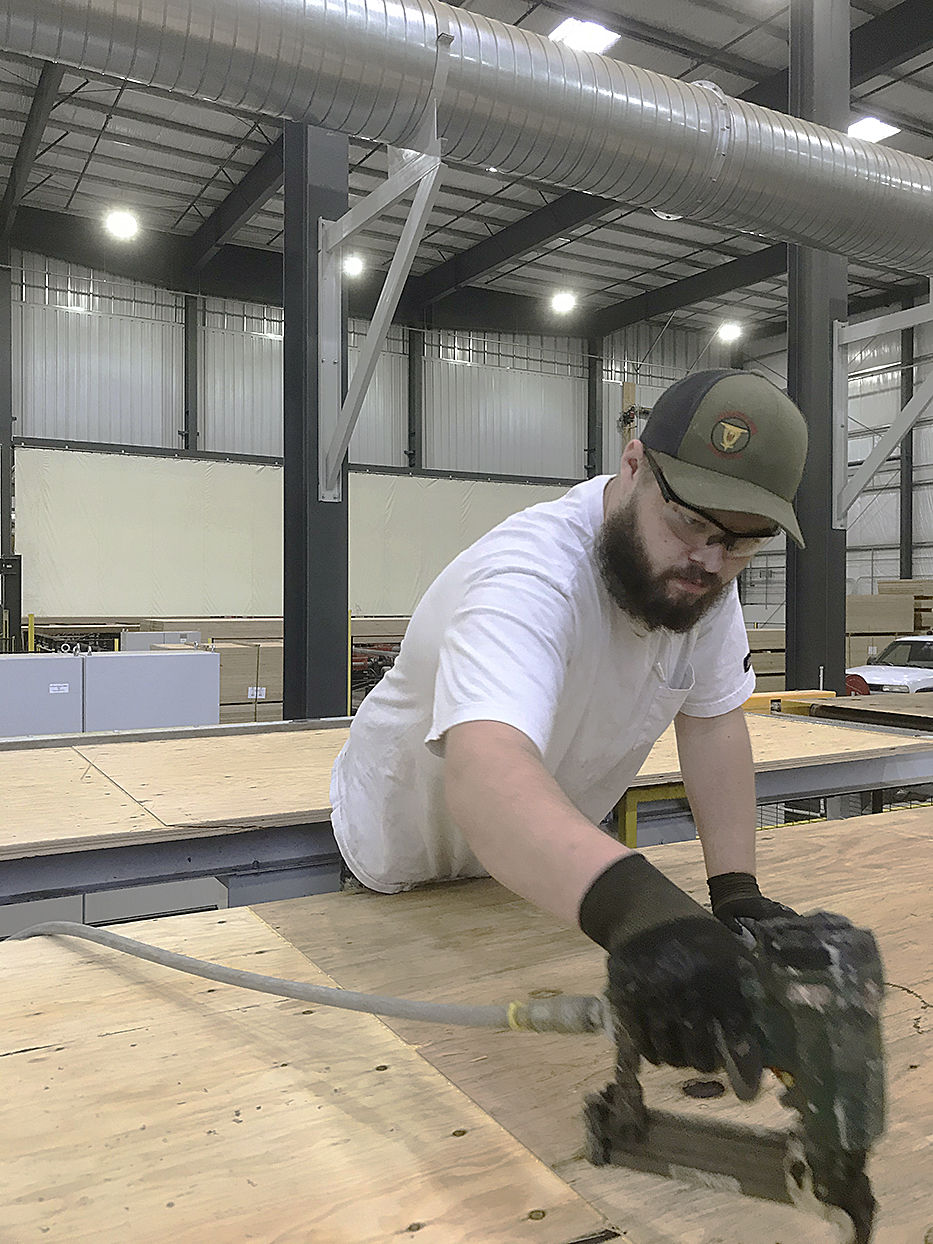 A Freres Lumber Co. worker tacks together plywood before it's pressed into larger panels that are cut to specification for use as building components. Mass plywood panels and similar products are catching on in the building trade.

Workers prepare mass timber structural components that are manufactured by Freres Lumber Co. Mass plywood panels and similar products are catching on in the building trade.

A Freres Lumber Co. worker tacks together plywood before it's pressed into larger panels that are cut to specification for use as building components. Mass plywood panels and similar products are catching on in the building trade.

Going from a manufacturer of “commodity plywood” to “mass plywood panels” has forced the Freres Lumber Co. to alter its mindset.

The interaction with buyers of standard plywood was traditionally straightforward, said Rob Freres, the company’s president. “We put it on the truck and billed them.”

Mass plywood panels require a much greater degree of communication and attention to detail.

The company’s facility in Lyons, Ore., can produce panels up to 2 feet thick, 12 feet wide and 48.5 feet long by gluing and pressing multiple layers of plywood together.

A computer-aided cutting machine can shape those panels into specific building components, which are then shipped and assembled at the construction site.

“We like to say our customers are only limited by their imaginations in how these products are used,” Freres said. “It’s been a learning experience for us.”

“There’s not a single occupancy governing the use of this. It’s a little bit of everything,” he said. “It’s a new tool for designers.”

As more new buildings use mass timber components, though, project developers must figure out how to make them work with other structural elements, such as window glazing attachments, Martin said.

The challenge is common in the technological industry, where manufacturers of such accessories as headphones must adapt to new mobile devices, he said.

“That’s the same as the development of any product,” Martin said.

Navigating the bureaucratic process has been another hurdle for project developers and the mass timber industry.

The International Code Council approved building codes that incorporate the use of mass timber components in late 2018, but the official code book including these products won’t be published until 2021, Martin said.

Even then, many jurisdictions across the U.S. only update their codes every two years, so it may take until 2023 for mass timber components to be widely approved across the country, he said.

Some states, such as Oregon and Washington, have fast-tracked code approvals for mass timber, while some developers apply for special permission to use such products, he said. However, this takes extra effort not everyone will undertake.

“You may find developers hesitant to go after something that hasn’t been officially adopted,” Martin said.

Even so, mass timber components are proving to be cost-competitive with steel and concrete, while wood has the look and environmental benefit of a premium product without the premium price, he said.

“These jobs have to pencil out, they do have to make financial sense,” Martin said. “I think it’s definitely going to become more prevalent across the board.”

According to Woodworks, there are currently 256 mass timber projects in the U.S. that have been built or are under construction, while another 458 are in the design phase. In 2019, the organization provided technical assistance to 266 such projects, up from 219 in 2018 and 158 in 2017.

Freres Lumber Co. has bid on about 120 projects worth roughly $55 million, and if it wins contracts for about 30% of those, they should keep the company busy for a year, Freres said.

Aside from building components, the company manufacturers temporary bridges and access mats that are used in the oil and construction industries to cross muddy, spongy soil.

These “lower value” products are useful in keeping the facility operating on a “day-to-day” basis and keeping employees busy between more intricate jobs, Freres said. “We want to do as many of these specialty projects as we can because they’re higher value.”