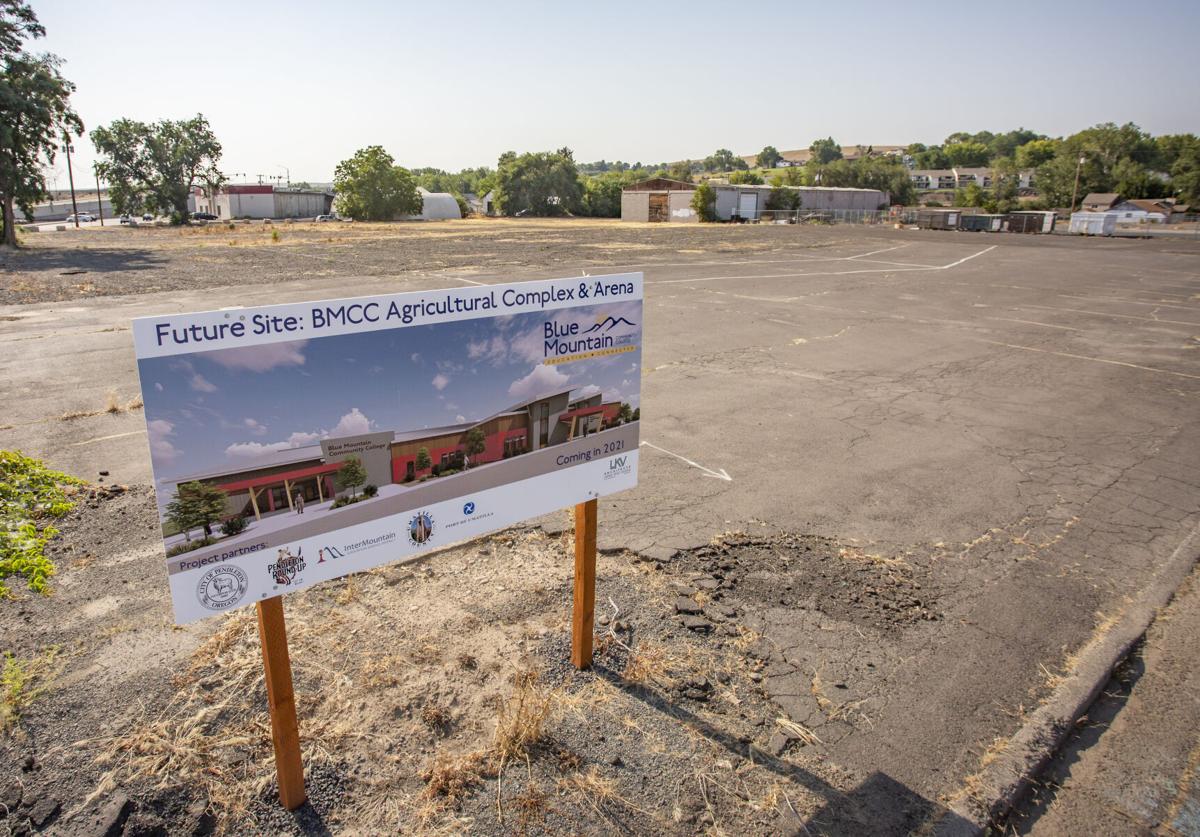 A sign along Southwest 18th Street in Pendleton advertises the future site of the Blue Mountain Community College Agricultural Complex and Arena on Wednesday, July 29, 2020.

A steep drop in lottery funds due to the COVID-19 crisis has killed the sale of $273 million in state bonds to pay for major projects, including the Blue Mountain Community College’s FARM II project, state officials said. 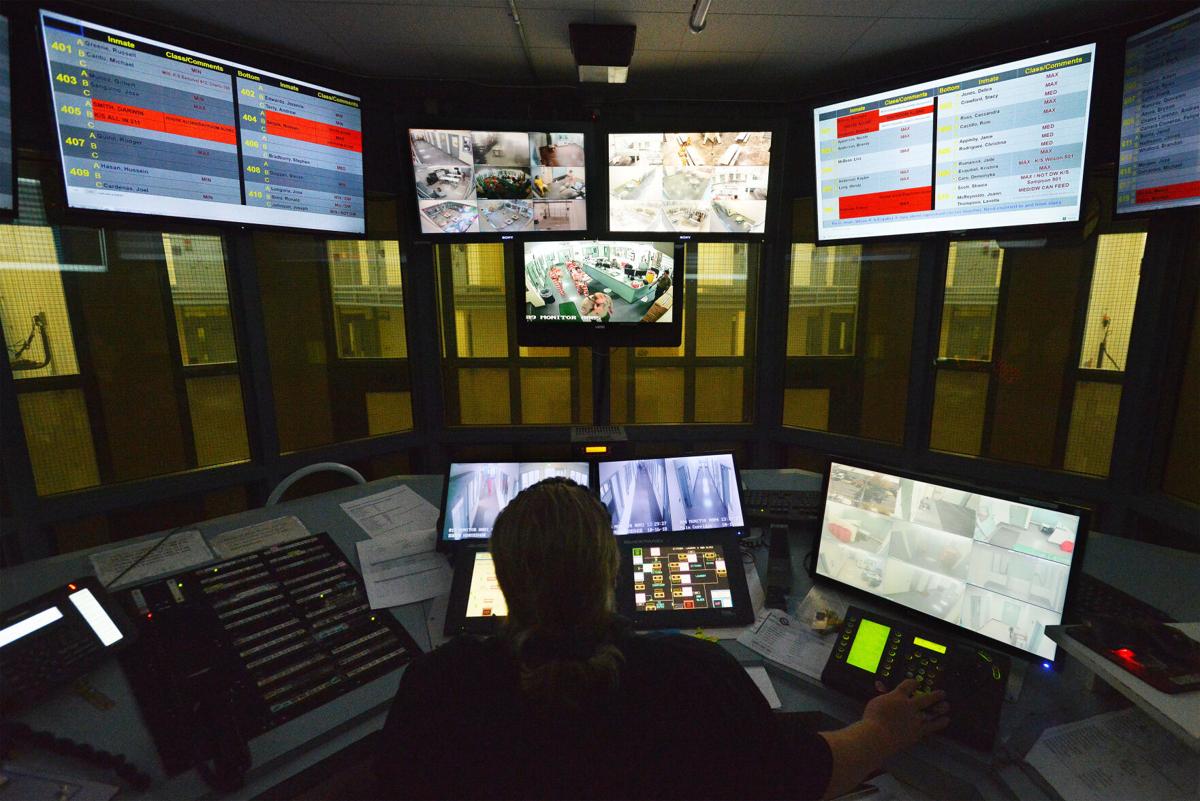 Umatilla County Sheriff’s Office deputy Mynde Lee monitors the inmate population from the control room in 2018 at the Umatilla County Jail in Pendleton. 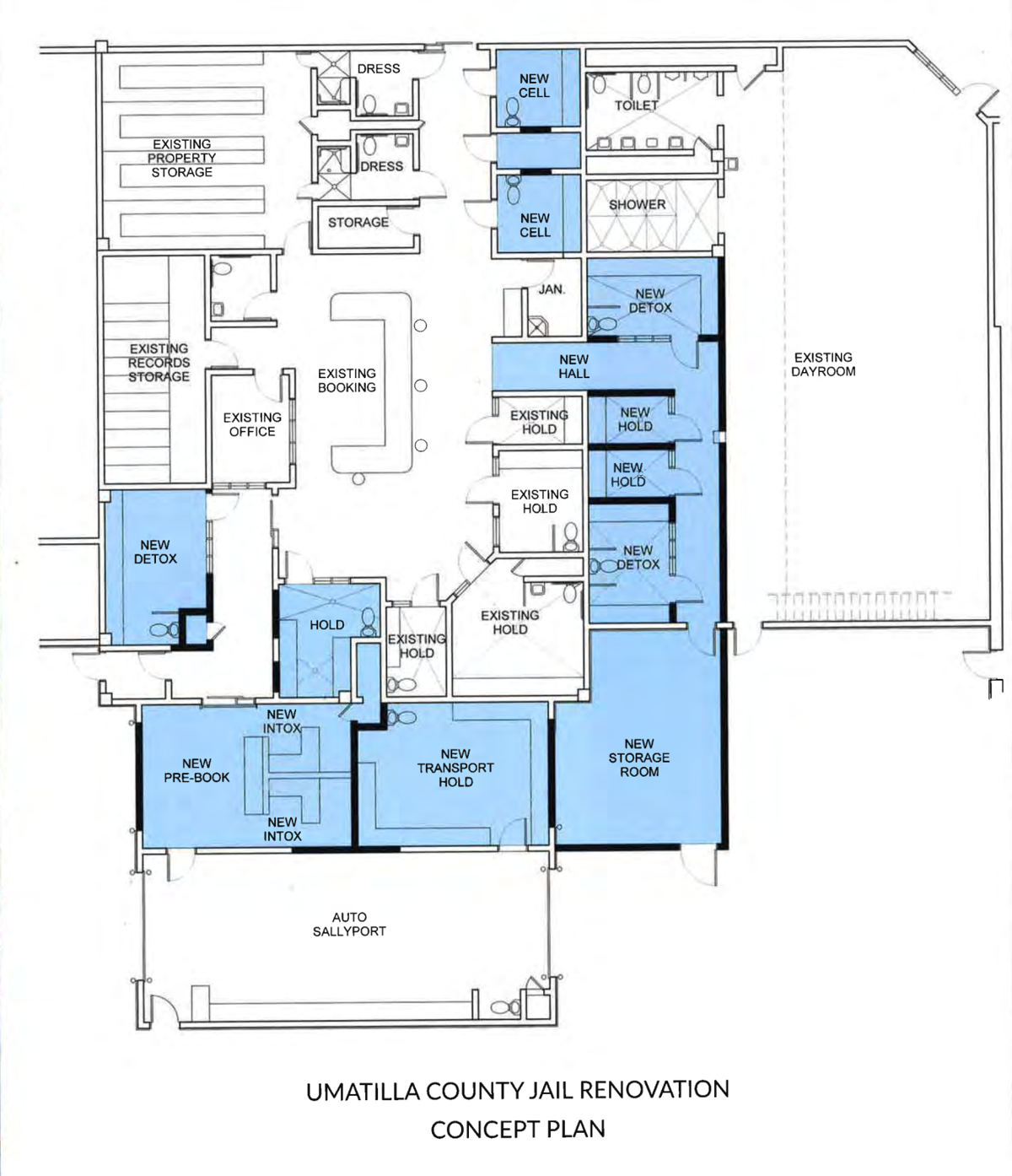 An architectural drawing of the Umatilla County Jail highlights areas proposed for renovation in blue.

A sign along Southwest 18th Street in Pendleton advertises the future site of the Blue Mountain Community College Agricultural Complex and Arena on Wednesday, July 29, 2020.

A steep drop in lottery funds due to the COVID-19 crisis has killed the sale of $273 million in state bonds to pay for major projects, including the Blue Mountain Community College’s FARM II project, state officials said.

Umatilla County Sheriff’s Office deputy Mynde Lee monitors the inmate population from the control room in 2018 at the Umatilla County Jail in Pendleton.

An architectural drawing of the Umatilla County Jail highlights areas proposed for renovation in blue.

PENDLETON, Ore. — Because of tanking lottery revenue, two local projects that once looked like sure things are now potentially heading to the chopping block.

Both Blue Mountain Community College’s FARM II project and renovations to the Umatilla County Jail were set to be significantly funded by Oregon Lottery bonds, but the ongoing COVID-19 pandemic has made their fates uncertain.

State Rep. Greg Smith, R-Heppner, is on the Joint Committee On Ways and Means Subcommittee On Capital Construction, and worked with the rest of Northeast Oregon’s legislative delegation to get the projects funded by the Oregon Legislature.

But with the pandemic forcing bars and restaurants to either shutter or curtail their hours, the Oregon Lottery’s video poker revenue fell drastically. Smith said revenue fell below the bond’s debt ratio, forcing legislators to reconsider funding capital projects across the state.

Smith said the Legislature is left with three options — cancel all the construction projects, table all the projects until the state’s next biennium, or prioritize which projects would be funded under a more modest package.

Smith said nothing’s set in stone, but he’s anticipating the Legislature goes with the latter option based on what he’s hearing from Salem.

He added that the Legislative Fiscal Office is devising a priority list of capital projects. Smith said factors like the project’s readiness for construction and how it contributes to essential services like public safety and public health will be determining factors.

If the projects aren’t funded this biennium, Smith said it will be an uphill climb to get them funded again with Eastern Oregon’s GOP legislators in the minority.

“We have to negotiate with as much wisdom and intellect as possible,” he said.

Locally, Umatilla County and BMCC are taking different approaches to the development.

About half of FARM II’s $13 million budget came from the lottery bonds, and BMCC President Dennis Bailey-Fougnier said the college is already looking ahead to the next biennium to lobby the state for full funding.

“We were a little surprised, just like everybody,” he said.

With the college already making significant cuts to its budget in light of the pandemic, Bailey-Fougnier said the college doesn’t have the money to make up for the loss of lottery funds.

FARM II, a working title, is being planned as an indoor rodeo arena and a classroom space for its agriculture program. The facility was to be built on land the Pendleton Round-Up Association owns west of the Round-Up Grounds.

BMCC had already pushed back construction to 2021, which was when it anticipated disbursement of the state funding.

Even with the setback, Bailey-Fougnier said BMCC still intends to build FARM II, just on a longer timeline. The college was fundraising for equipment for the building, and it will continue to fundraise with the idea that some might now go to capital costs.

Umatilla County officials said this week they plan to move forward through the planning and designing stage of the jail modification project until it’s ready to break ground for construction.

“Our desire, as far as the county’s perspective, is to go ahead and move ahead with that process,” Umatilla County Sheriff Terry Rowan said on July 28. “It seems like we’re mere weeks away from having some finalized, bid-ready designs.”

Umatilla County Commissioner George Murdock said on Wednesday, July 29, that the county has spent $186,500 to date on contracts to manage the project and oversee its architectural designs, all of which could have been reimbursed through the initial $1.6 million allocation.

“If we had simply called a halt to the process, we would have wasted all of the money we’ve put into designing the project and getting the plans ready, so we opted to move forward to a point where all that investment wasn’t lost,” Murdock said.

Rowan said the final modification designs, which are being drawn by Lombard Conrad Architects at a cost of up to $240,000, will likely be completed between mid-August and early September.

The modifications are intended to better outfit the county jail for intaking and holding inmates who need accommodations and services related to mental health and or drug addiction, but Rowan believes these modifications could also help better isolate inmates during the current public health crisis.

“It becomes extremely, extremely challenging finding places to safely hold someone who may have been exposed, may be awaiting test results, or may be exhibiting symptoms,” he said.

While there’s no requirement that the Legislature uphold its $1.6 million commitment for the project, the county is optimistic it’s demonstrated the project’s need through its front-end investment and shown the ability to begin construction whenever the funding becomes available.

“Our hope is that one way or another, from one pot or another, that funding will become available,” Rowan said.