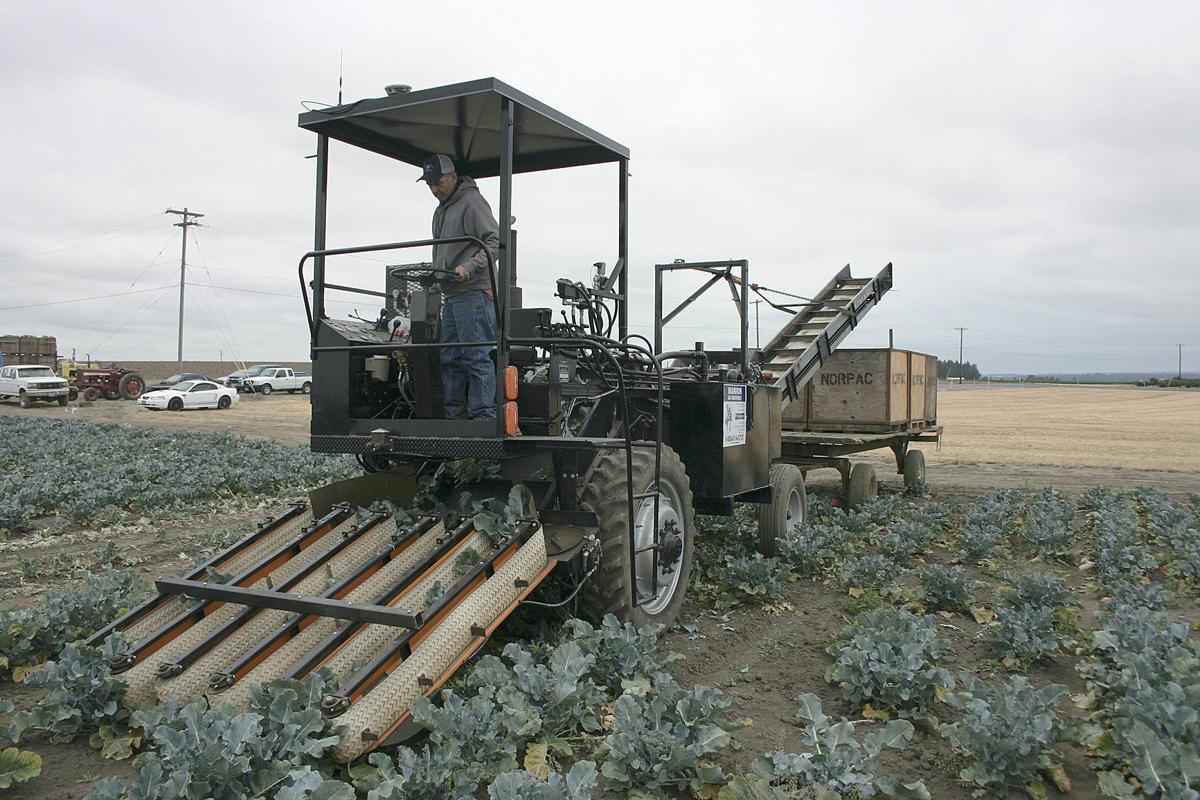 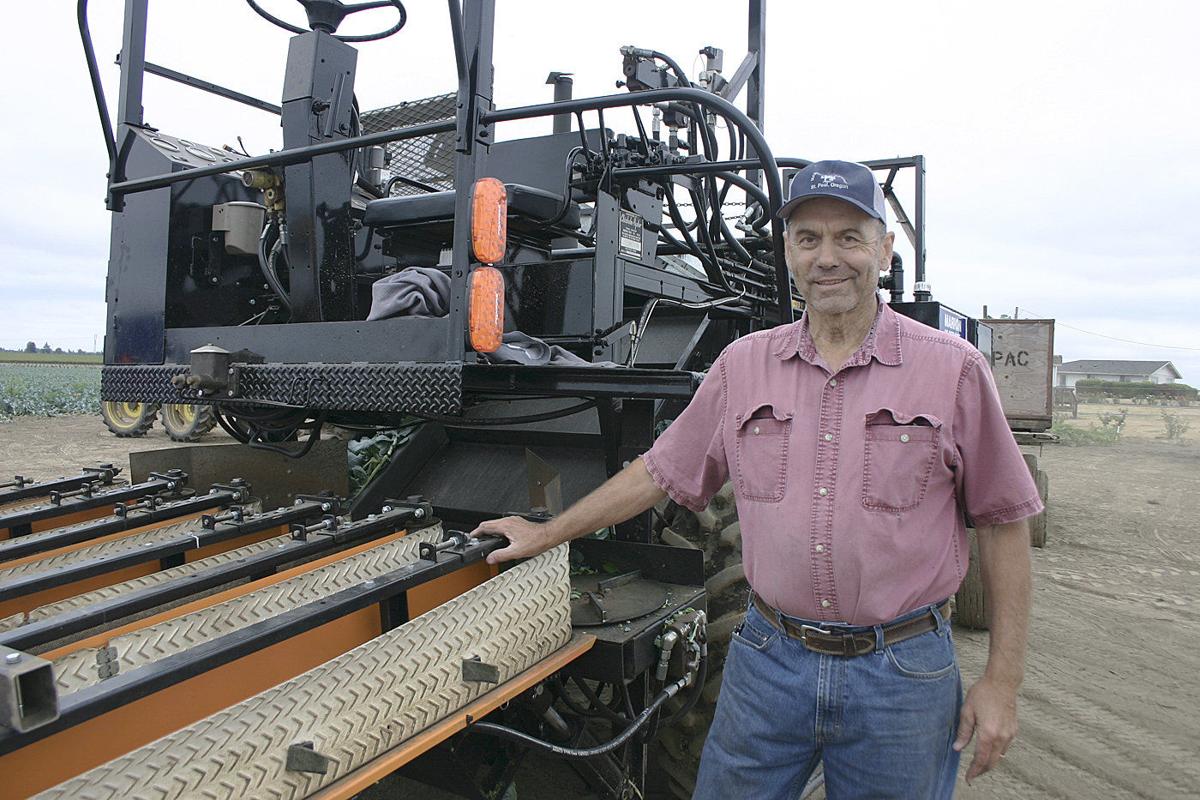 Ron Pearmine, of Pearmine Farms, has created a mechanical broccoli harvester that he hopes will allow farmers in the Willamette Valley to grow more broccoli while overcoming labor shortages and rising production costs.

Ron Pearmine, of Pearmine Farms, has created a mechanical broccoli harvester that he hopes will allow farmers in the Willamette Valley to grow more broccoli while overcoming labor shortages and rising production costs.

Ron Pearmine describes himself as a “broccoli ambassador” for the Willamette Valley.

This year, Pearmine is growing 175 acres of broccoli at his family’s farm in Gervais, Ore. But the crop, while desirable, has declined significantly in the area due to labor shortages and rising production costs.

Broccoli is harvested today almost exclusively by hand, with crews of about 20 people going over fields two or three times to maximize yields. Without enough workers, local farmers are growing just half as much broccoli as they were six years ago, according to NORPAC Foods, a farmers’ cooperative and food processor based in Salem.

Ever the engineer — he has a bachelor’s degree in computer science engineering — Pearmine began tinkering with machinery to come up with a solution. He created a mechanical harvester out of a 1976 Chisholm-Ryder bean picker that he believes could promote increased acreage, while replacing hand crews entirely.

“I’m excited about it,” Pearmine said. “It does create a new opportunity for broccoli here in the valley.”

Pearmine’s goal is to machine-harvest 80 acres of broccoli at his farm this season. Other growers have also shown interest, allowing Pearmine to harvest several smaller plots in their own fields.

On Aug. 2, Pearmine mounted the harvester and began a trial run at Obersinner Farms on Howell Prairie between Salem and Silverton. It took 20 minutes to make one pass down a quarter-acre row, filling four large wooden crates with broccoli bound for NORPAC.

“It works. It’s effective,” Pearmine said. “We could pick our broccoli mechanically if we choose to. It’s a viable option.”

Pearmine is not the first to conceive of a mechanical broccoli harvester — though nothing has been developed so far commercially.

Pearmine was inspired to come up with his own design after a trip to Case Equipment Manufacturing in North Dakota, where he saw robots welding parts for machinery. If robots can weld, then he figured they can also pick broccoli.

The first attempt came in 2013, or what Pearmine calls “the big fail.” Nothing about that system worked right, he said, and the setback lingered for several years before he went back to the drawing board.

“I have an engineering brain, I guess you could say,” Pearmine said with a chuckle.

By sheer innovation — or insanity, as Pearmine jokes — he assembled a working prototype last year by rigging the old bean picker with three rows of spinning blades in front, similar to a corn harvester. Once cut, the broccoli is carried up a conveyor belt over a series of metal rollers that pinch off the leaves, and dropped into bins on a flat trailer.

Pearmine gave a presentation on the harvester at a NORPAC grower meeting in December 2017, where he caught the attention of fellow growers like Tom Fessler, of Fessler Farms in Woodburn, who agreed to participate in field trials.

“There’s been talk we need to move in that direction,” Fessler said. “Ron took the bull by the horns, and developed a machine.”

From a technical standpoint, Fessler said the harvester works well. The problem: It cuts everything all at once, though broccoli often does not mature at the same rate.

That means potentially sacrificing yield with machine harvesting, for the sake of efficiency.

“You’re going to have some (plants) that are slightly over-mature, some that are just right and quite a few that are on the small side, based on our experience right now,” Fessler said.

Pearmine acknowledges that, unless broccoli fields are uniform in maturity, the harvester has its drawbacks.

“That’s part of the reason why I want to get it out, so guys can have that experience,” Pearmine said. “How much do you want to give up on yield? If you don’t want to give up anything, you’ll continue picking by hand.”

Pearmine is nonetheless bullish that mechanical harvesting will eventually prove to be a boon for the industry, reversing the trend of lost acreage brought on by mounting labor shortages.

Randy Lyons, vice president of agriculture services for NORPAC, said fewer workers combined with Oregon’s rising minimum wage have driven the decline in broccoli production from 2,000 acres in 2012 to just 1,000 acres this year.

To make up the difference, Lyons said the co-op is buying twice as much broccoli from Mexico to process into its line of soups and frozen vegetables. NORPAC is excited about the potential of Pearmine’s harvester, Lyons added, though crop quality will be the ultimate test.

“We’re working with him real closely to make sure what he’s bringing into the plant, we can make the best use of,” Lyons said. “It has to be as good as what’s in the marketplace, or better.”

In addition to NORPAC, Pearmine said he has received support from Wilco and Marion Ag Services. After harvest, he intends to compare machine-harvested yields to those of hand crews, and continue working with partners to fine-tune the system.

“People are interested. They’re supportive, and they’re excited,” Pearmine said. “It creates a new future, I think, for NORPAC and broccoli.”