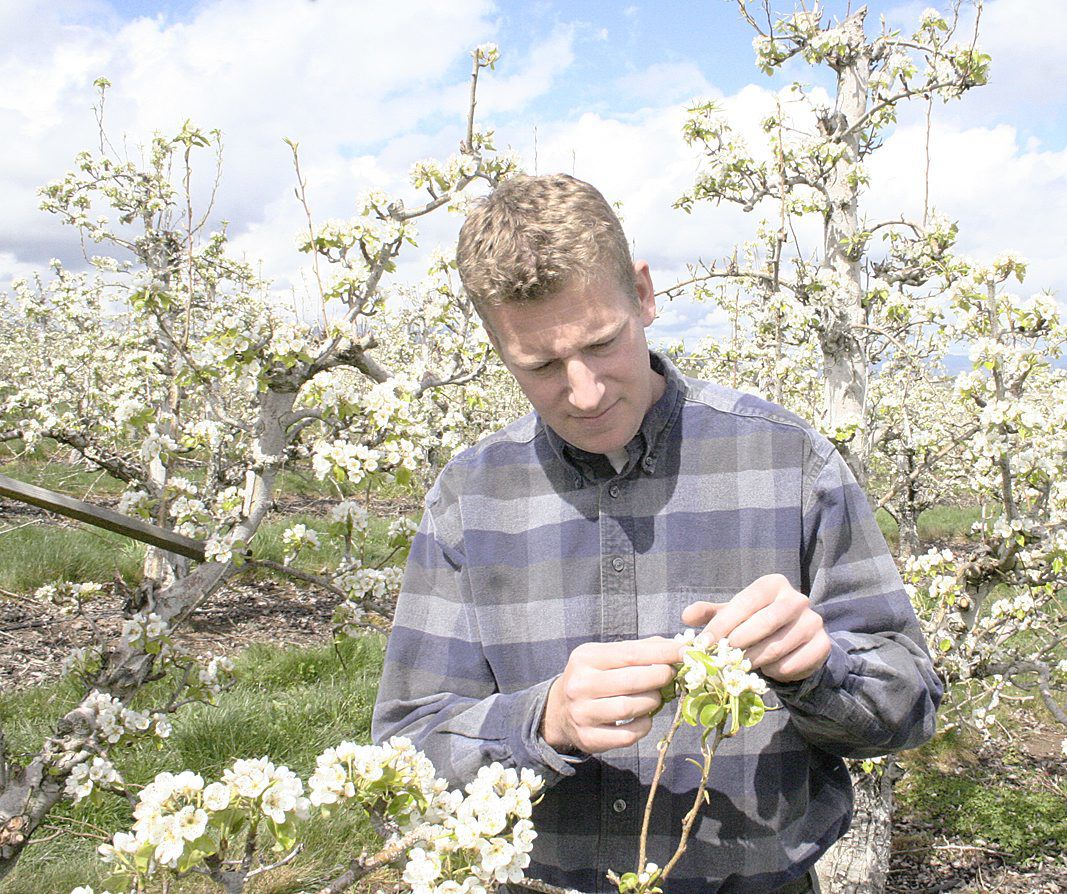 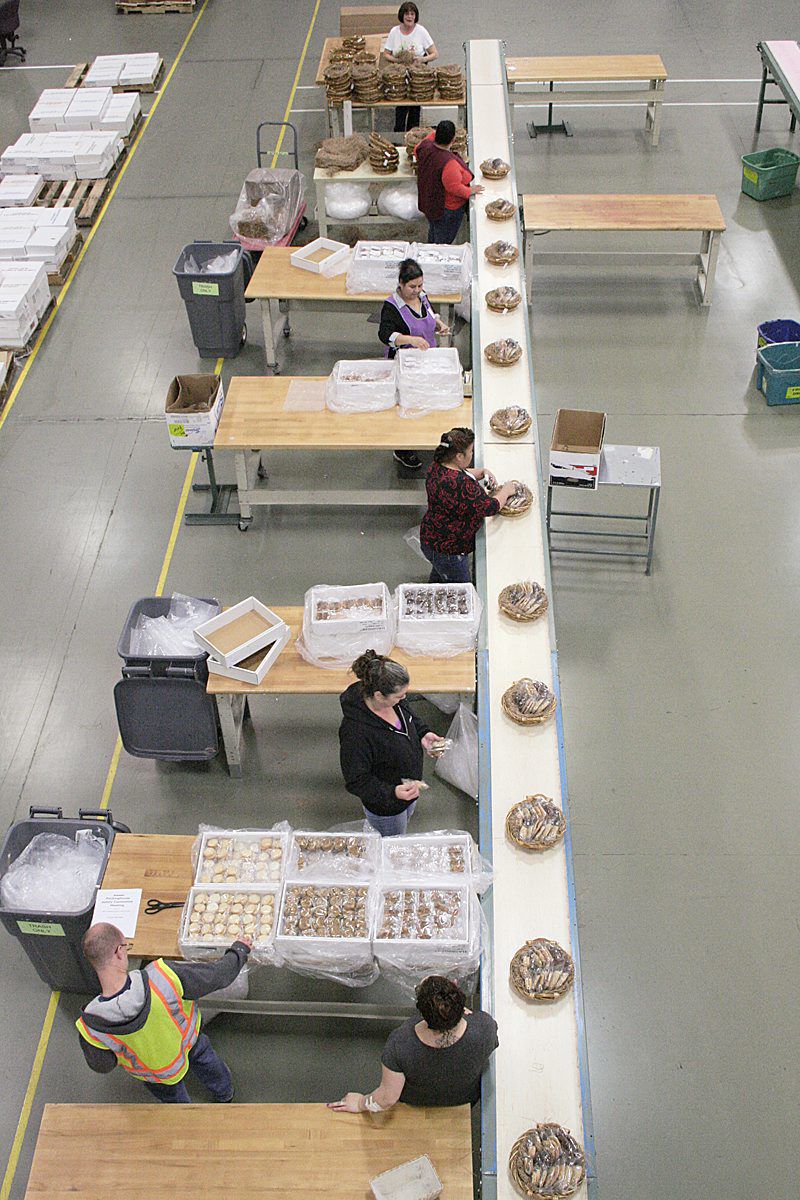 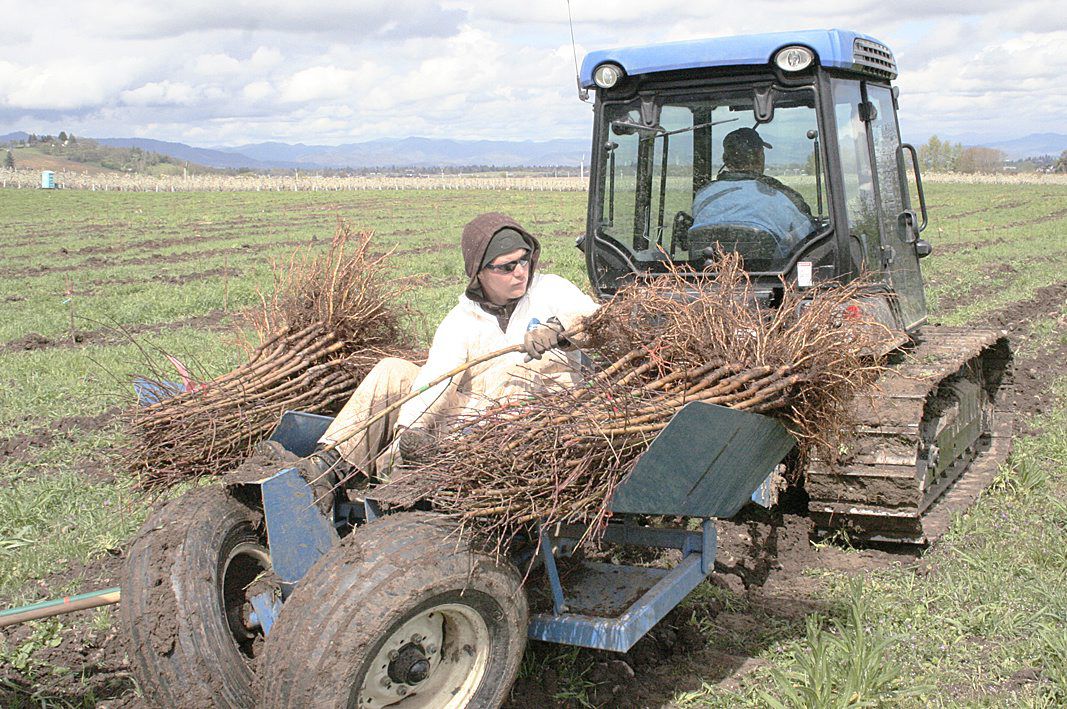 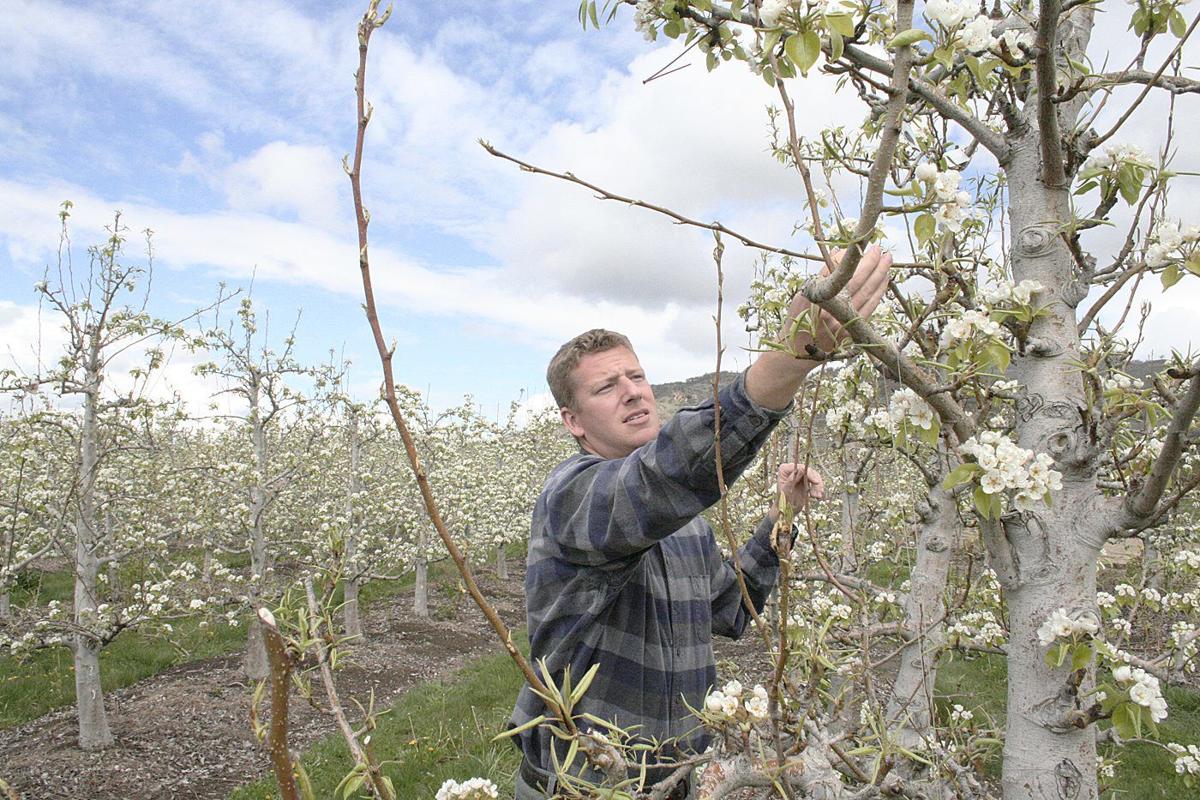 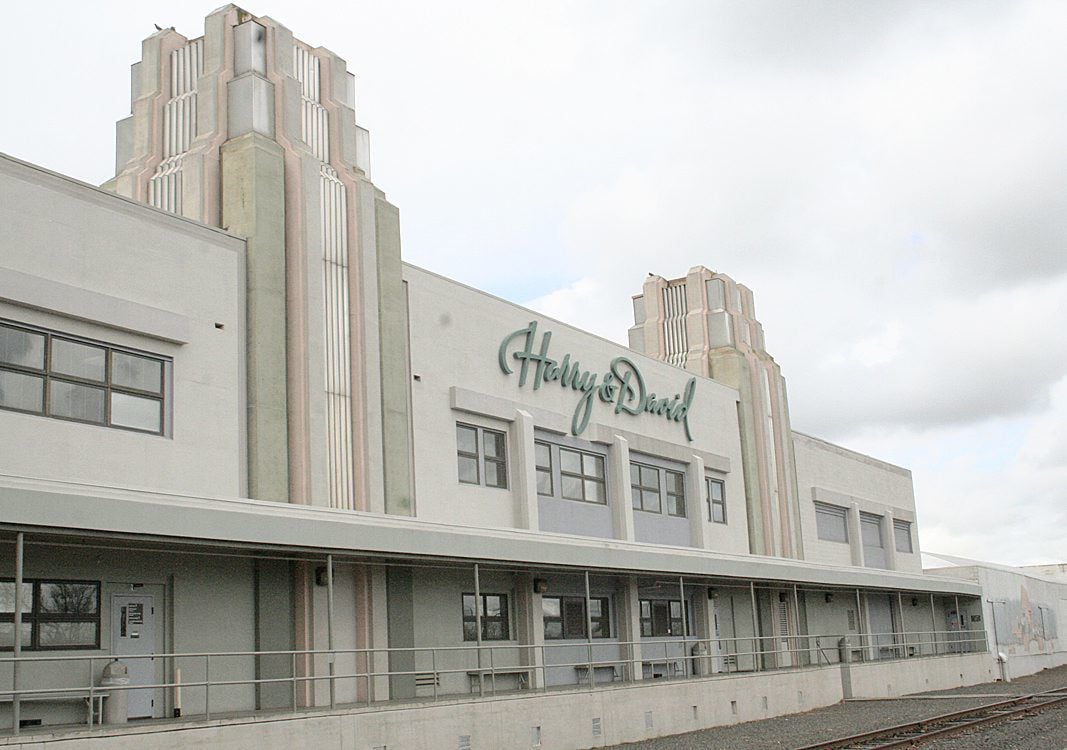 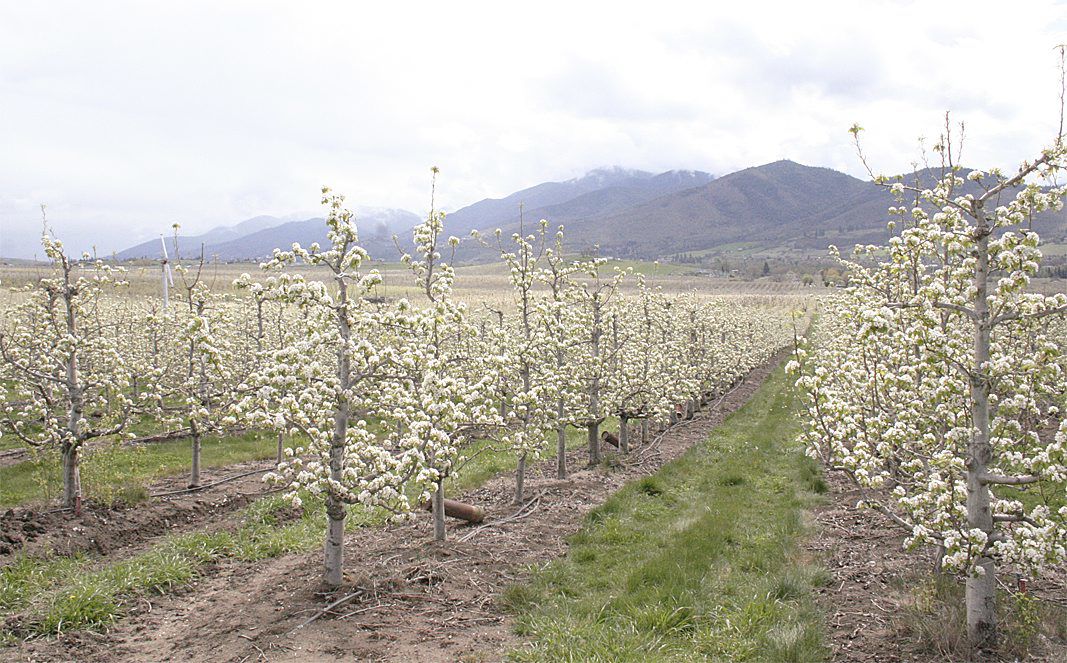 Matuesz Perkowski/Capital Press Pear trees in bloom at an orchard in Oregon's Rogue Valley owned by the Harry & David Co.

Matuesz Perkowski/Capital Press Pear trees in bloom at an orchard in Oregon's Rogue Valley owned by the Harry & David Co.

Fruitset has been good and trees are adorned with healthy young pears, said Josh Minchow, agricultural systems specialist for Harry & David Co., which produces fruit on roughly 1,600 acres in the region.

“It appears we’ve pulled through quite well,” said Minchow, noting that the possibility of fruit drop still lingers.

The early bloom and subsequent frost protection battle seem to have worked — and provide an apt metaphor for Harry & David, which itself is emerging from a period of financial uncertainty that threatened its future.

Roughly three years after the company emerged from bankruptcy protection after a series of ownership changes that left the company burdened with debt, Harry & David is again turning a profit and sales of its high-end fruit baskets and other products are posting modest increases.

Signs of the company’s resurgence are evident in the orchards, where new pear and peach trees are being planted to replace marginal ones that were removed during the depths of the downturn.

“There’s a definite feeling of ‘Invest and grow,’” said Minchow. “It’s an exciting time to be part of the orchards department.”

In its 2010 fiscal year, which preceded the bankruptcy filing, Harry & David lost $39 million. The prospect of the 104-year-old company shutting down caused alarm in the local agricultural industry, which feared a domino effect of financial devastation for farm suppliers and service providers.

“Harry & David is an important grower and business in the valley. They bring an economy of scale to other farms,” said Doug Lowry, CEO of Associated Fruit in Talent, Ore.

Harry & David’s role in the Rogue Valley is unique because it doesn’t sell into the same markets as other growers, said Charles Jaeger, a business professor at Southern Oregon University.

“There is limited competition with the other pear growers, but at the same time, H&D’s presence in the agricultural cluster helps to make farming operations more efficient in the entire area,” he said in an email.

The terms of its bankruptcy plan opened a path to redemption for Harry & David.

Creditors agreed to trade much of their bonds for equity, giving them ownership of the company while greatly reducing the debt load.

The effect was that Harry & David was relieved of the massive interest payments that had been erasing its profits.

In its 2013 fiscal year, the company earned $13 million in net income while growing sales by 3 percent, to more than $380 million.

Revenues increased by 1.4 percent during the first half of its 2014 fiscal year while profits have remained flat.

The financial rebound has been somewhat tentative, but the company’s managers see several reasons for optimism.

For example, Harry & David’s online sales were particularly strong during the most recent holiday season, its peak sales period, growing more than 9 percent over the previous year.

The company is continuously improving its online e-commerce site to make product presentation and the checkout process more intuitive, he said.

“All of it aims at making it easier and more natural for the customer to interact with Harry & David,” said Schwindle.

That’s not to say other sales channels have fallen by the wayside.

Sales through the mail are nominal these days but the firm still sees its print catalog as a powerful marketing tool, he said.

Though customers may ultimately buy gift baskets and other products online, the catalog raises awareness and assists decision-making.

“The catalog is a form of broadcast advertising,” Schwindle said.

Even so, Schwindle said many customers return to physical stores as a way of hedging their bets and buying gift baskets on site.

The huge increase in products shipped through UPS and FedEx during the holidays has resulted in some gifts arriving late, he said.

“There is only so much that can run through that pipeline at any one time,” said Schwindle.

Vacancies in retail space have also created the opportunity to set up temporary “pop-up” stores at shopping malls during the holidays.

From the consumer’s point of view, the “pop-up” stores look like permanent locations, but Harry & David doesn’t need to lease them year-round, Schwindle said.

The company’s permanent stores can act as a “springboard” for these temporary locations by providing a place to train staff, he said.

The company has also deployed Harry & David kiosks that can be assembled in a few hours.

“You can be upscale these days and be successful,” he said.

“You have to be distinct in whatever you’re doing, and to give Harry & David credit, they are distinct,” he said.

The company stands to gain from the versatility of its gift baskets, said Pam Danziger, president of Unity Marketing, which tracks luxury sales trends.

A fruit basket is more thoughtful than a gift card but not as intimate as jewelry, she said. The product can be given to friends and family as well as business acquaintances.

“It’s a completely dependable gift,” Danziger said. “It’s not too personal. It’s appropriate for all kinds of occasions and all kinds of relationships.”

The convenience of ordering the company’s gift baskets is another virtue, as consumers know they can provide high-quality gifts without much effort, Sansolo said.

“It’s not something you can just jump in and do,” Sansolo said. “You’ve got to be good at it.”