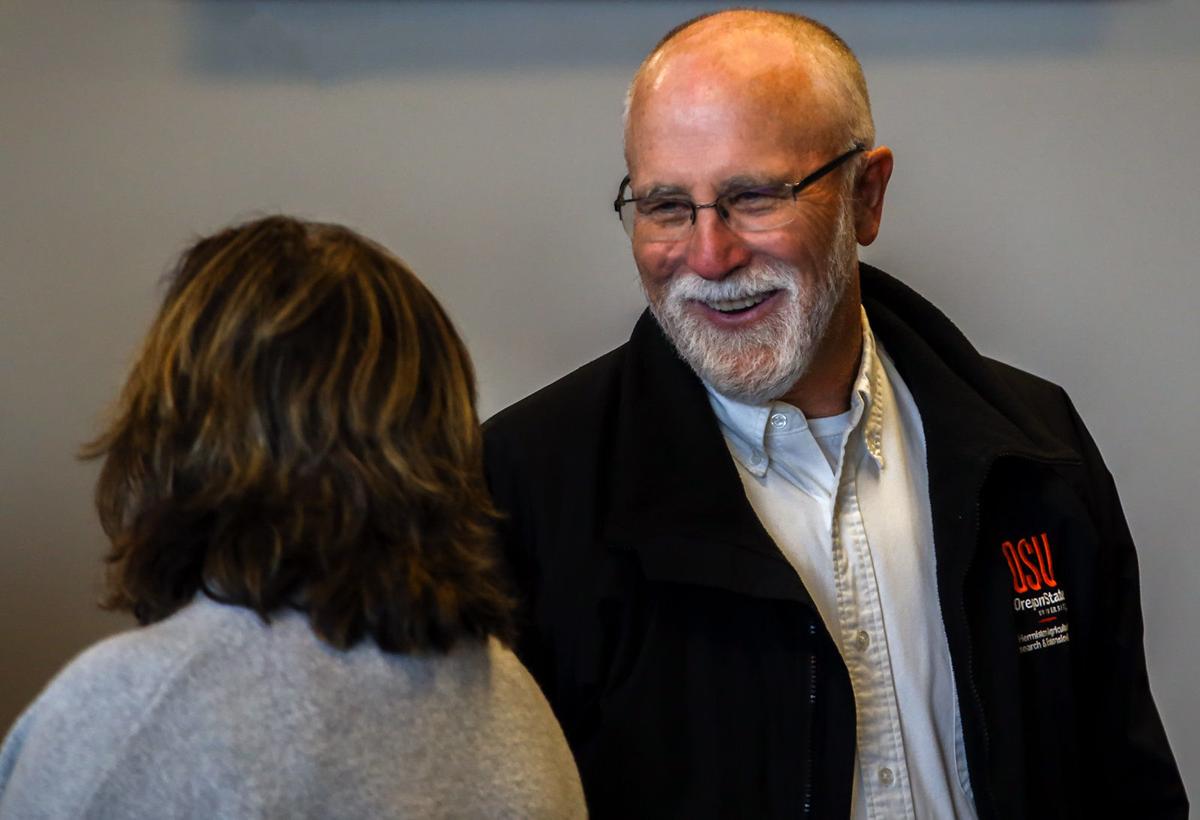 Phil Hamm, director of the Hermiston Agricultural Research & Extension Center, chats with another participant Wednesday at the Hermiston Farm Fair. Hamm announced he will retire this summer. 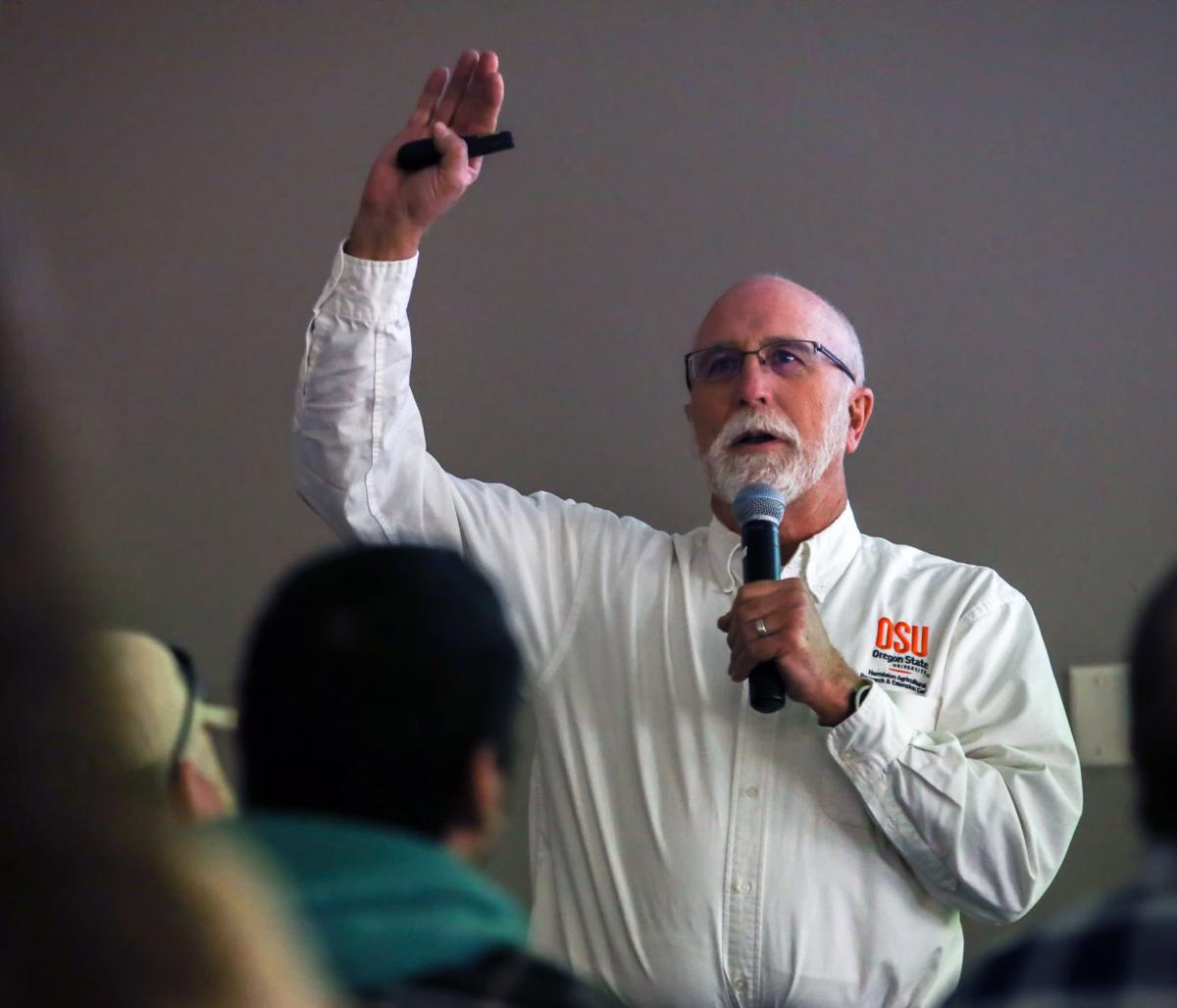 Phil Hamm, director of the Hermiston Agricultural Research & Extension Center, chats with another participant Wednesday at the Hermiston Farm Fair. Hamm announced he will retire this summer.

At Wednesday’s Hermiston Farm Fair, the conference room at the Eastern Oregon Trade and Event Center was packed with growers and scientists listening to Phil Hamm talk about potatoes.

Hamm’s presentation, “What I Would Do to Manage Diseases if I was a Potato Grower,” was his last as an Oregon State University employee. The longtime plant pathologist and professor will retire in summer of 2019 after a nearly 30-year career with the college, and a nearly 45-year career studying plant diseases.

He kept the crowd involved during the half-hour seminar, covering the basics of four common potato diseases and how to avoid them.

“Potato Virus Y does two things,” he said, letting his professorial side come out. “Someone tell me.”

He noted that the virus, which reduces tuber yield and quality, is difficult to control, and is vectored — or spread — by aphids as well as seed-borne. His recommendation to growers: Produce PVY-free seed, and make sure the seed has been tested thoroughly.

After the presentation, Hamm tried to leave but got sidetracked about a dozen times in conversations with people who have known and worked with him for years.

“That’s the sad part — this is what I’m going to miss when I finally retire,” he said. “I had several growers testify in front of the Ways and Means committee, and I realized, they’re not my stakeholders. They’re my friends.”

Hamm retired from research about seven years ago, but since then has been at the experiment station part-time as an administrator.

Hamm said the position at the experiment station was brand new when he arrived in 1980 — he applied for it after several years as a research assistant in forest pathology at OSU. During that time he’d also gotten a graduate degree in plant pathology.

When he applied for the position in Hermiston, Hamm said that role hadn’t existed at the station before, but some local growers had gone to the state legislature and got the position secured.

Though most of his research has focused on potatoes, Hamm said the diversity of crops in the Columbia Basin has lent variety to his research, as well.

“We worked on lots of diseases with other crops — lima beans, onions, carrots, corn,” he said.

His colleagues noted his knack for developing relationships with both growers and other researchers.

Ken Frost, an assistant professor of plant pathology, said Hamm’s support for researchers has been a help to all staff.

“He’s worked really hard to promote OSU extension, and also help out growers,” he said. “He’s done a lot to foster the relationships with growers in the region.”

So he began going to visit growers and look for issues with potatoes, as well as other crops. He began recognizing issues that some of the growers didn’t recognize they had.

“They just lived with them,” he said.

Once he started visiting farms and developing those relationships — plus showing what the research station could offer — he said the calls came in quickly.

Over the years, he and his team have worked with growers around the region, researching diseases in potatoes and other crops in the area.

He added that his role is not to “think out loud.”

There were solutions that have remained elusive — dealing with ergot, a fungal disease in grass seed, is a problem Hamm said is still largely unsolved — but he said he felt good about the progress he and his team made on several problems with potatoes and other crops.

“We’ve provided new information to growers about how they could use (our research) to reduce and completely manage diseases,” he said.

Though he’s been a staple at the experiment station for nearly 30 years, many community members might recognize Hamm from other areas.

He’s a board member for several community organizations, like the Blue Mountain Community College Foundation and the Umatilla Electric Cooperative.

“I’ve still got lots of things to keep me busy,” he said.

He plans to stay in Hermiston, where he will continue to serve with local groups, as well as hunt and fish in his free time.

“Maybe more importantly than anything, I have grandkids that live right next to me,” he said. “If they’re not moving, I’m not moving.”

Hamm said that while he won’t be working in the industry, he looks forward to continued growth and change in local agriculture.

“We have over 204 different crop types in the Columbia Basin,” he said. “That’s going to continue to change as growers look for things that provide them a greater return on investment.”

“It’s still a federally regulated material, but that’s going to change,” he said. “We’ll always be a potato area, but hemp might turn out to be a huge new opportunity with huge potential returns.”

Market for the misshapen: Where farmers send their 'ugly' produce