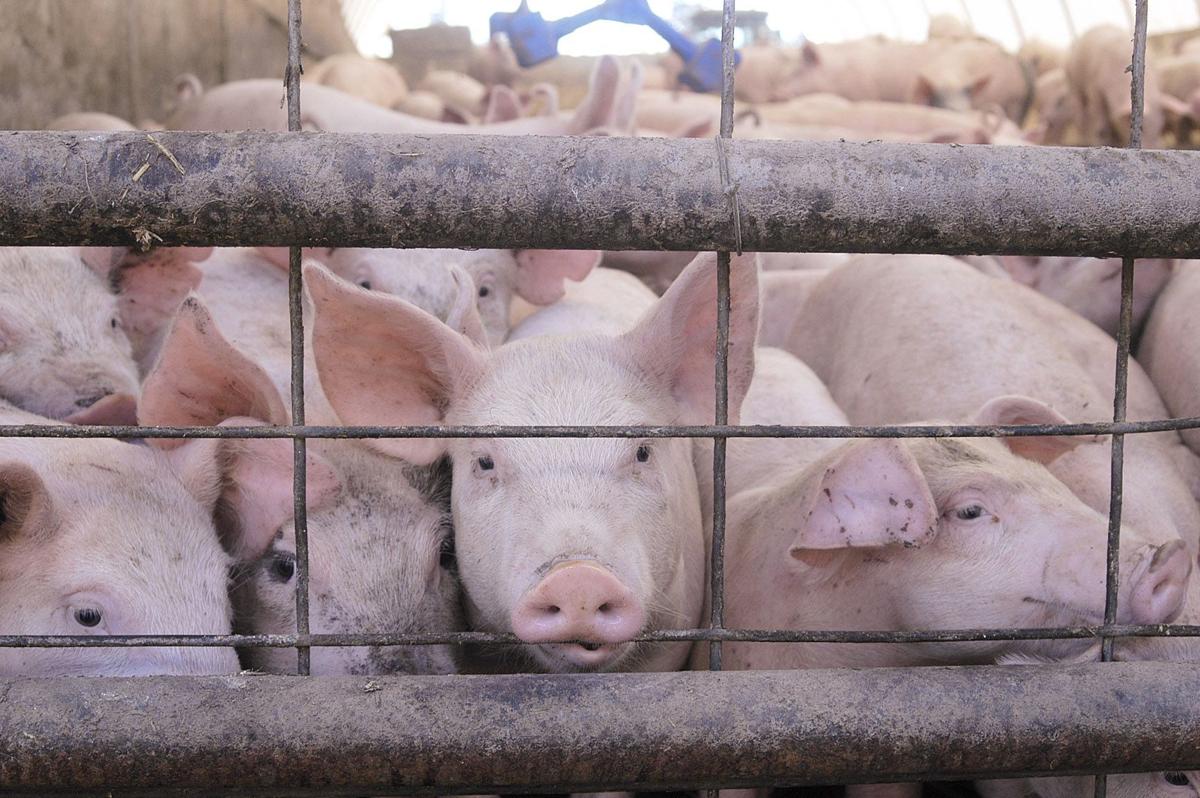 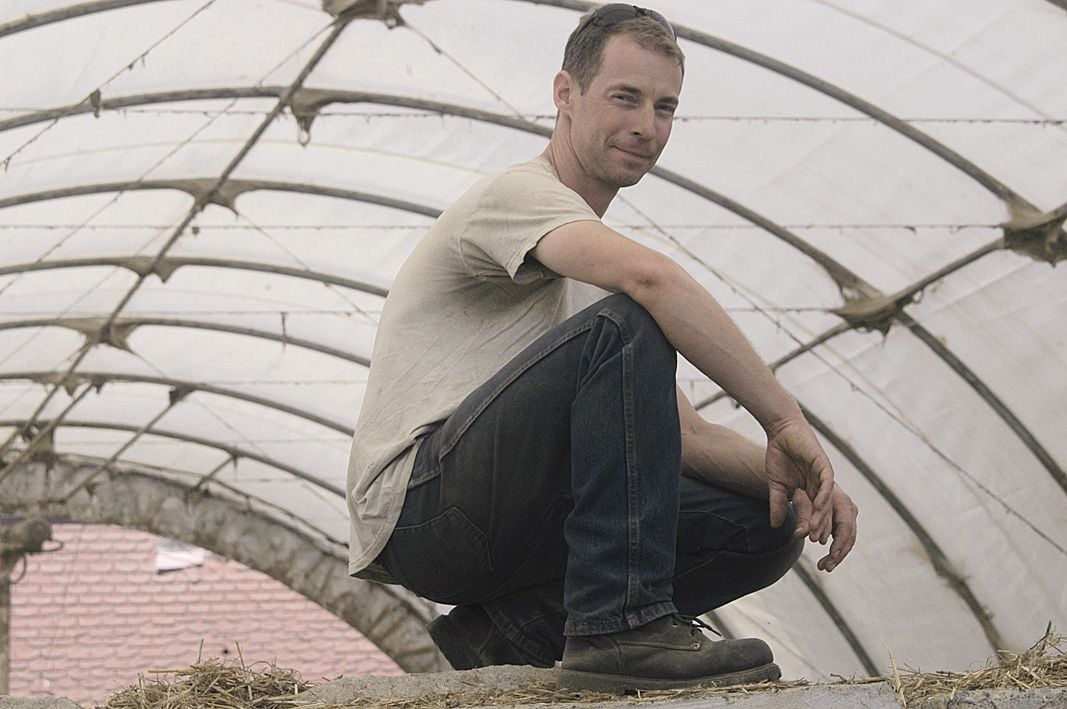 Greg Rieben says the family was cautious about signing on with New Seasons, a grocery chain favored by Portland's hipsters. “They were catering to a market that is not us.” 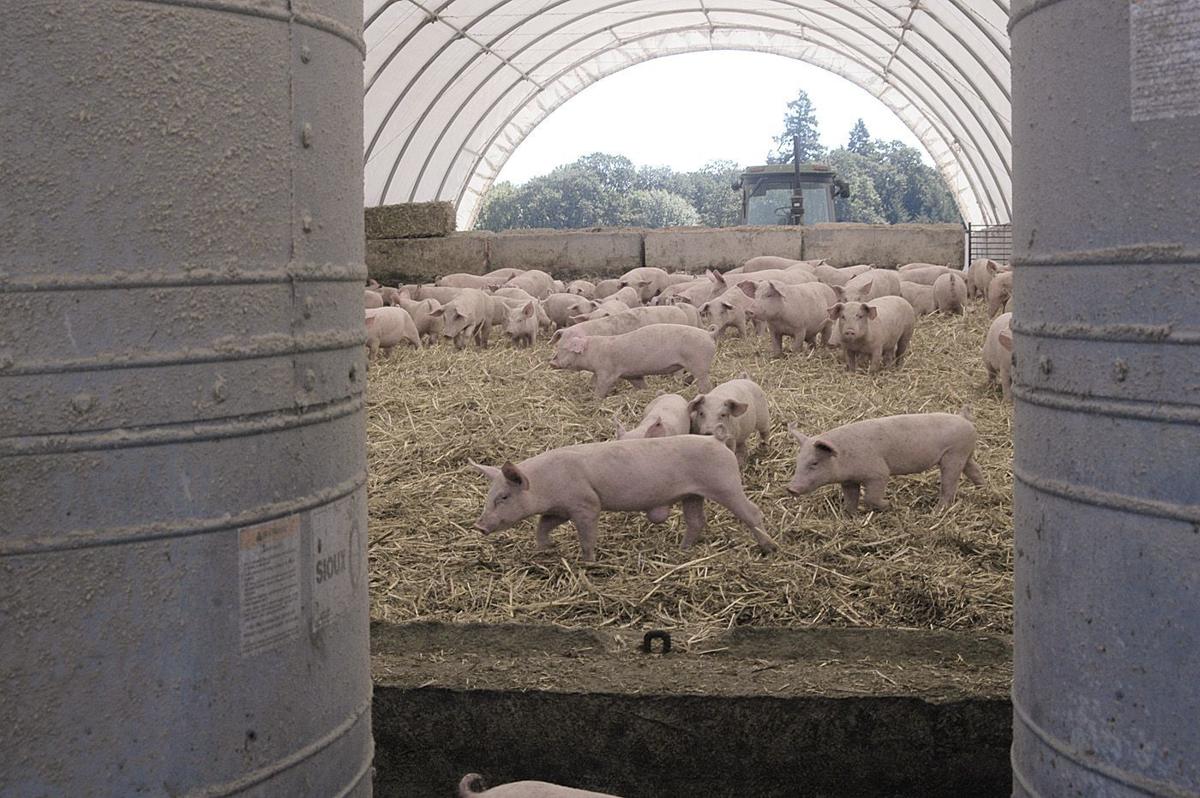 At the urging of New Seasons, which provided a $20,000 no-interest construction loan, Rieben Farm built a hoop house that allows pigs more time outside and helped qualify the farm for humane treatment certification. 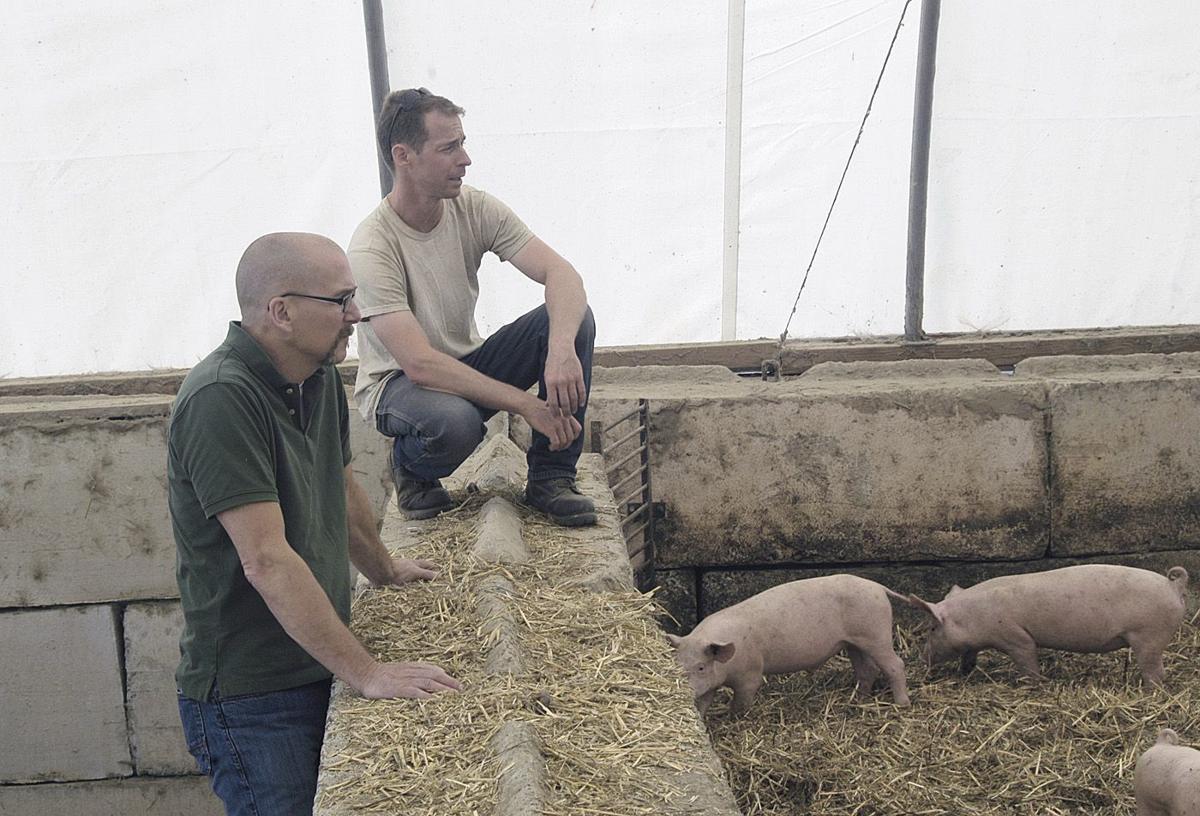 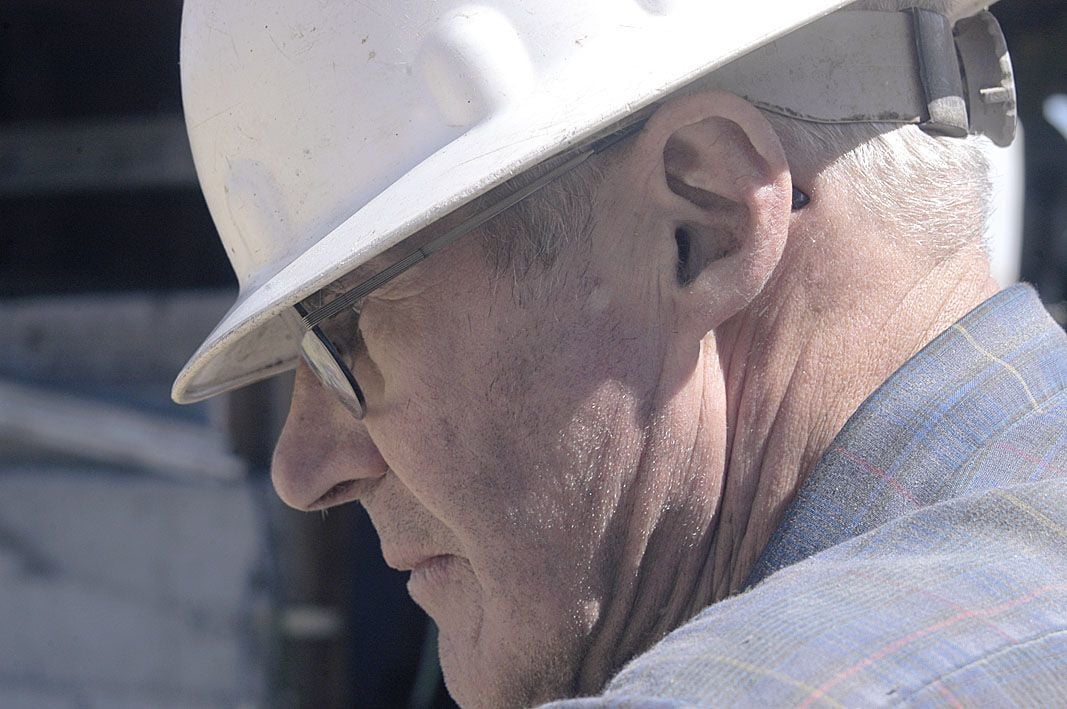 Ernie Rieben, 76, transformed the family farm from a small dairy to a hog operation. “Pigs tie you down, too, but you don't have to milk them,” he says.

Greg Rieben says the family was cautious about signing on with New Seasons, a grocery chain favored by Portland's hipsters. “They were catering to a market that is not us.”

At the urging of New Seasons, which provided a $20,000 no-interest construction loan, Rieben Farm built a hoop house that allows pigs more time outside and helped qualify the farm for humane treatment certification.

Ernie Rieben, 76, transformed the family farm from a small dairy to a hog operation. “Pigs tie you down, too, but you don't have to milk them,” he says.

BANKS, ORE. — Hogs are “diabolically smart” and dangerous, Greg Rieben will tell you. Some of those sows, if they have young, can be “very homicidal,” he says.

“The big thing with pigs is,” he says, “they would eat you if they had the opportunity.”

So will the market. Get careless or have bad luck and there you go. Sometimes, legislation or regulation tilt the playing field and things start to slide. When Greg Rieben was growing up, there were six other hog farms within two miles of his family’s place. They are the only one left.

The reason they didn’t go under is a lesson in modern farming. It’s a story of a rural producer figuring out how to get along with the urban consumer. In some cases that means swallowing your pride, giving up a slice of your independence and allowing outsiders a significant say in your operation. When you’re small, local and family-owned, that’s how you hang on, maybe even thrive.

When a New Seasons meat buyer first approached them in 2000, looking for a local pork producer, the Riebens — Greg and his father, Ernie — were wary.

“We hadn’t heard of them,” Greg Rieben says. “The urban-rural divide — they were catering to a market that is not us.

“My dad was very, very cautious,” he says. “He’s been left holding the sack a few times on hogs.”

Alan Hummel tried calling a couple times. Ernie Rieben and his wife, Linda, looked at the caller ID and wondered why “New Seasons” was calling them, and didn’t answer at first. When Hummel got through, he said he’d heard they raised pigs and wanted to come take a look.

Hummel, a veteran of the alternative grocery business and New Seasons’ meat and seafood director, immediately liked what he saw.

The Riebens are Swiss immigrants who began farming in Washington County in 1889. The farm, 200 acres, is tucked along Mountaindale Road out past Beaverton and Hillsboro, former farming towns that long ago gave themselves over to Nike and Intel and hold 90,000 people each.

Ernie Rieben was the third generation of what was a general farm operation of its time: pigs, grain, chickens and 25 milking cows. When he took over in 1969, it was clear the farm had to go big as a dairy or do something else. Ernie Rieben sold off the cows, telling his father he didn’t want to milk anymore.

“Pigs will keep you tied down, too, but you don’t have to milk them,” he says.

The Riebens are compact, capable and self-sufficient men. They raise much of their own hog feed and mix it themselves. A series of augers brings streams of wheat, oats, canola and minerals to a hammer mill, which pounds it into a meal for the hogs. They build most everything themselves; in early September father, son and one other relative erected a new steel grain bin capable of holding 4,000 bushels of oats.

“We’ve always grown as much as we can ourselves,” Greg Rieben says. “We’re as closed a system as we can be.”

But it was an older building, a pig farrowing, or birthing, barn built in 1959, that caught Hummel’s eye when he first visited. Ernie Rieben didn’t like the confining gestation and farrowing crates some hog farmers used, and he’d scouted other farms before settling on the design: two rows of indoor pens with a walkway down the middle for feeding and cleaning access. Each pen opens at the back to small, individually fenced outdoor spaces, so the sow and her piglets can get outside if they want, but remain separated from other family groups.

The system is considered more humane than crates; animal rights groups and many consumers oppose confinement.

The farm is a “farrow to finish” operation, with groups of sows moving in cycle from pasture, where they are bred by the five boars kept on the place, to the farrowing barn. Hogs are raised to about 250 pounds in six months.

He offered a generous price, better than what the Riebens were getting on the open market and one that did not fluctuate as hog prices rose and fell. The Riebens had already phased out antibiotics in their feed, and at New Seasons’ request converted to a purely vegetarian diet for the hogs.

Within a year, New Seasons was the farm’s primary customer. The Riebens now take 17 hogs a week to nearby Dayton Natural Meat for processing. Tags in New Seasons’ display cases identify the pork as coming from Rieben Farm or from Pure Country Pork, a much bigger outfit in Ephrata, Wash.

“There wasn’t a lot of reason to stay in the hogs,” Rieben says. “They made it worthwhile again.”

Five years ago, New Seasons provided the farm a $20,000 no-interest loan to build a hoop structure that would help it gain livestock sustainability certification from the Food Alliance, a Portland nonprofit. The building is open at both ends like a tunnel and gives pigs more covered outdoor space. When he learned the Riebens planned to erect the hoop structure themselves, Hummel rounded up six to eight store meat managers and drove out to help.

Non-GMO certification is the next step, and the most complicated. Hummel said New Seasons’ customers oppose genetically engineered material in the food chain, and he’s asked the store’s meat and seafood suppliers to obtain verification by the Non-GMO Project, a Bellingham, Wash., nonprofit.

However, the Non-GMO Project has been swamped with verification requests, up to 80 a week, as mandatory GMO labeling ballot measures have popped up in multiple states — including Oregon’s vote on Measure 92 in November. There’s now a four- to six-month backlog, according to Associate Director Courtney Pineau. The cost for verification starts at about $400, depending on the complexity of the ingredients tested, and includes a smaller annual fee.

Greg Rieben, 40, is on the combine, harvesting the oats that will become part of his hog feed mix. Ernie Rieben, 76, drives a 1973 Dodge pickup into the field and maneuvers under the combine’s off-loading spout to receive the next load. It’s a 200-yard drive back to the new grain bin, where the oats will be stored. The bin is a spin-off of the non-GMO certification process, as the Riebens move to produce more of their own feed.

Ernie Rieben is retired, supposedly, but nothing’s changed. “I thought this would be easier, but I’m not sure it is,” he says with a soft laugh.

He was able to go his own way and get rid of the milking cows when it came his turn to run the farm in 1969. Although he says New Seasons has been fair and reasonable to work with, he has some muted gripes about the non-GMO process and about city people who tell them how to farm. But it’s Greg’s show now.

Ernie and his wife, Linda, live across the driveway from Greg, his wife, Cynthia, and their two young daughters. Ernie’s grandparents bought the farm in 1889 and his father was born on the place. “When you’ve been here this long, you get attached to it,” he says.

Greg Rieben credits his father with keeping the farm alive during tough times. At one point, he says, the family was getting nine cents a pound for hogs that cost 35 cents a pound to raise.

“All my growing up years we were taking quite a beating,” he says. “It’s basically due to my dad being very wise financially that we survived. There were a lot of really bad years. He’s really careful with his money.”

Klingeman, the Pure Country Pork founder, says Northwest hog farmers can’t compete with Midwest producers. To hang on, their best bet is to hook up with a dedicated buyer with a niche customer base, as he’s done with New Seasons and PCC Natural Markets of Seattle.

“For a small farmer, I think it is,” he says. “Otherwise, the grocer runs to the biggest guy they can. We’re all after survival.”

“I’ve always wanted to farm, I wouldn’t want do anything else,” he says. “How come? I like being outside, I like running machinery, growing things — it’s a real satisfying life.

“We’re certainly not getting rich at it, but it’s really neat to work the same ground my great-grandfather worked.”