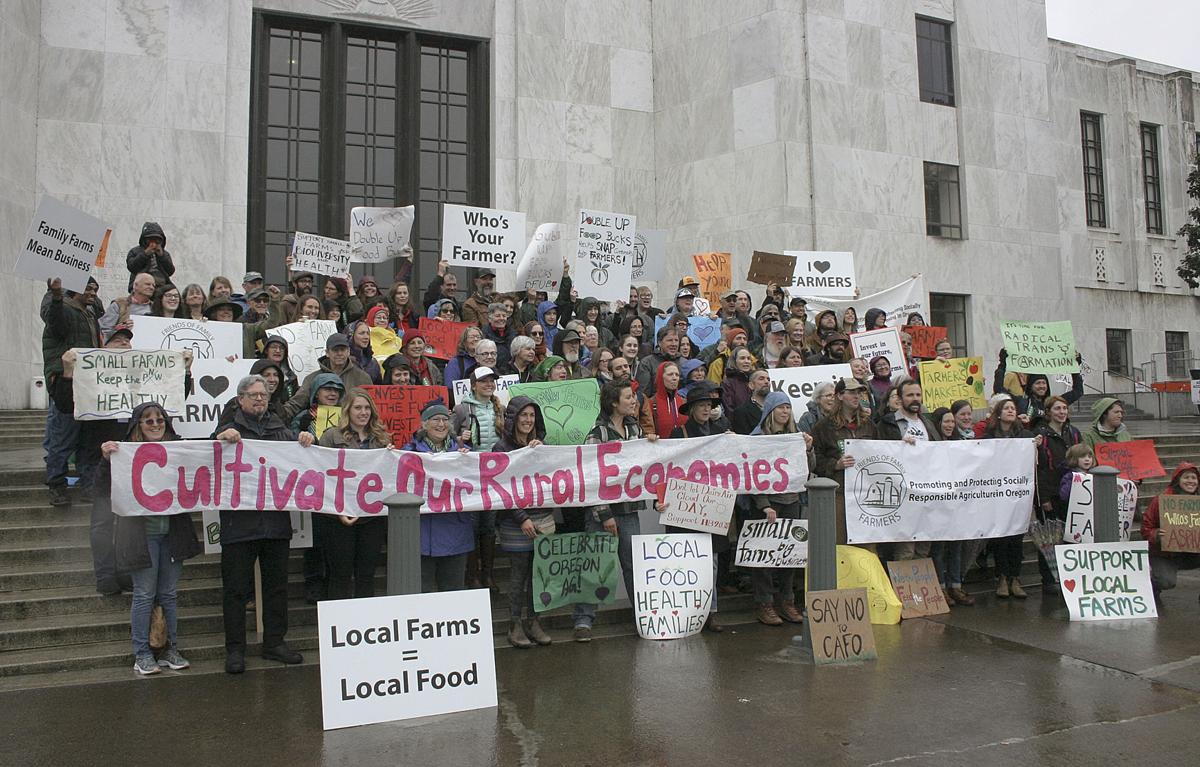 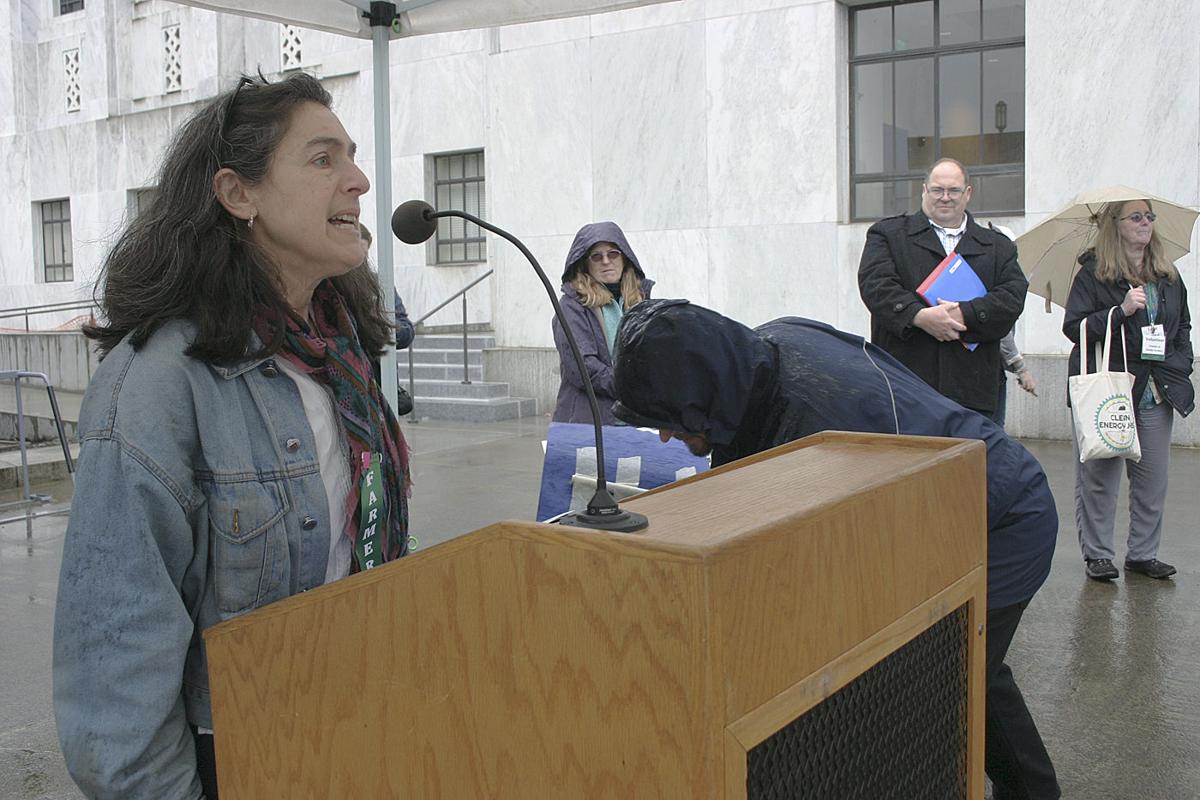 Shari Sirkin, of Dancing Roots Farm in Corbett, Ore., and executive director of Friends of Family Farmers, speaks during a rally March 27 at the State Capitol. 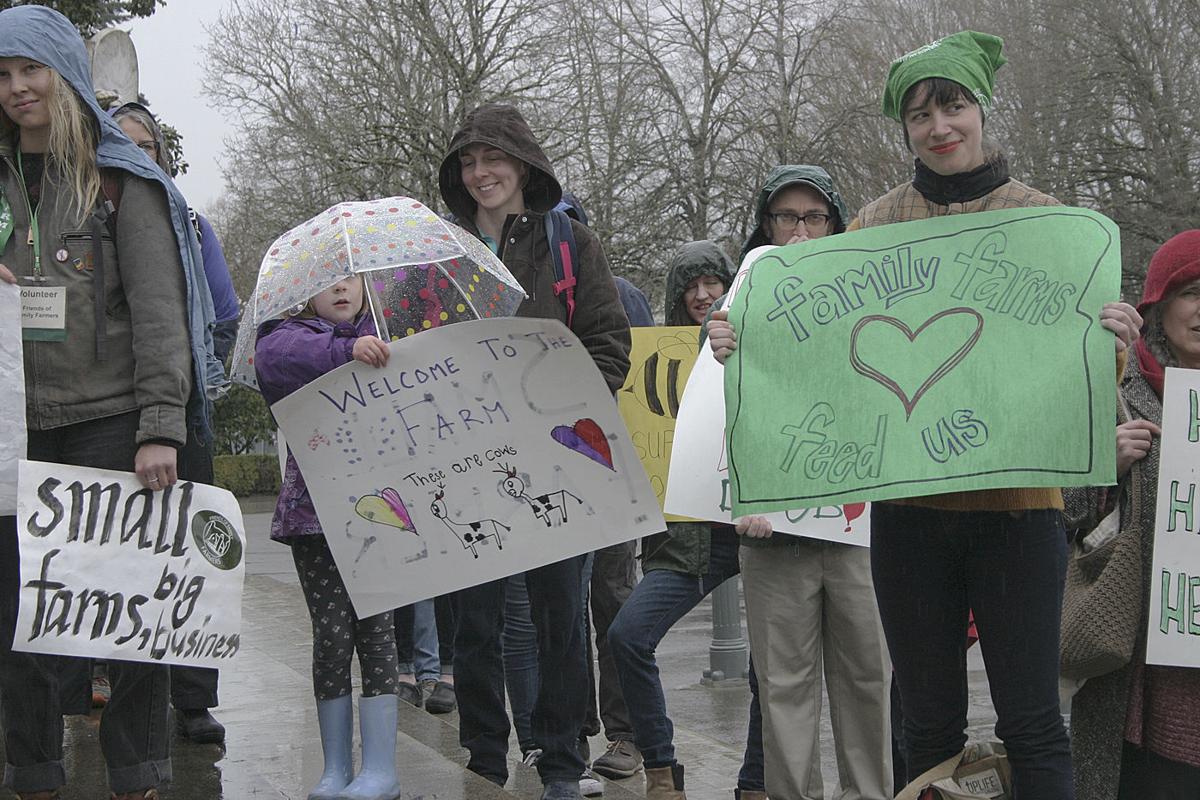 Shari Sirkin, of Dancing Roots Farm in Corbett, Ore., and executive director of Friends of Family Farmers, speaks during a rally March 27 at the State Capitol.

SALEM — Family farmers and local food supporters from across the state rallied in the rain March 27 outside the Oregon State Capitol, calling on lawmakers to pass a suite of bills including a proposed cap-and-trade program for greenhouse gas emissions and a moratorium on large dairies.

The event was hosted by Friends of Family Farmers, a Salem-based nonprofit that advocates for small and mid-size farms.

Shari Sirkin, of Dancing Roots Farm in Corbett, Ore., serves as executive director of Friends of Family Farmers. She fired up the crowd with chants while urging them to speak up for measures to strengthen rural communities.

“We need your voices to spread out in all these halls of power,” Sirkin said. “Who else is going to speak for us?”

One of the most controversial bills in the Oregon Legislature, House Bill 2020, would establish a cap-and-trade program overseen by a new state agency, the Oregon Climate Authority. Under cap-and-trade, companies that emit more than 25,000 metric tons of carbon annually would purchase “allowances” for emissions, with the money reinvested in climate-friendly initiatives.

Friends of Family Farmers supports the bill, while the Oregon Farm Bureau and other agricultural groups oppose it, arguing it will increase costs without making a dent in global climate change.

Linda Perrine, of the Honor Earth Farm near Eugene, Ore., said HB 2020 would be “an amazing start to Oregon dealing with climate change.” In three of the last 10 years, Perrine said, ice storms have wrecked her hazelnut orchards, and in two years summer drought left the Coast Fork Willamette River too dry to irrigate.

“There are trends happening here that have not happened in the past,” she said.

Lawmakers introduced new amendments to the bill, such as the inclusion of a refund program of up to $100 million per year to mitigate higher fuel costs for rural Oregonians.

Perrine also urged small farmers to lobby for 20% of the revenue collected from carbon allowances to go toward rural communities. Negotiations on HB 2020 are expected to continue in the coming weeks.

Crowley, 31, is in the first year of running her own farm, raising pastured pork and poultry. Before that, she did a farm apprenticeship through Rogue Farm Corps to gain management training.

Because apprenticeships often do not pay more than a small stipend, plus room and board, Crowley said many beginning farmers do not have the capital or credit necessary to start their own business.

“Access to capital and access to land are the two biggest barriers to getting into the business that young people face,” Crowley said.

House Bill 3090 would also create a beginning farmer and rancher incentive program under the Oregon Department of Agriculture focused on student loan and tuition assistance.

House Bill 3092 would establish a statewide beginning farmer tax credit to incentivize leasing land to beginning farmers and ranchers. Kristin White, a first-generation farmer in Hillsboro, Ore., said that is especially important as 64% of Oregon’s agricultural lands are set to change hands over the next 20 years, according to a 2016 university study.

“Oregon’s agricultural legacy is on the line,” White said. “We cannot afford to lose one enthusiastic young person.”