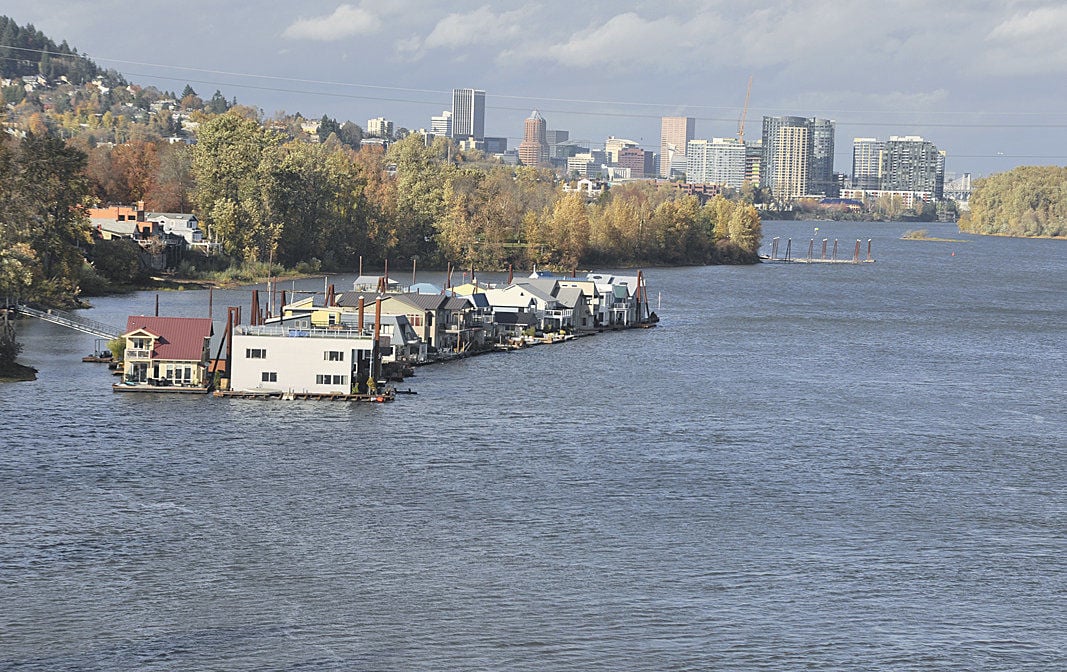 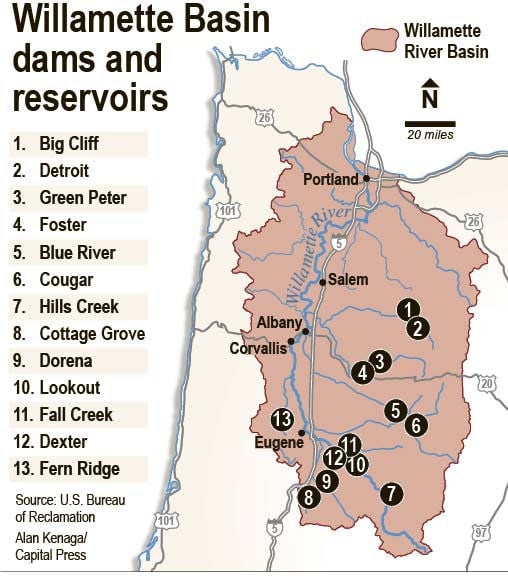 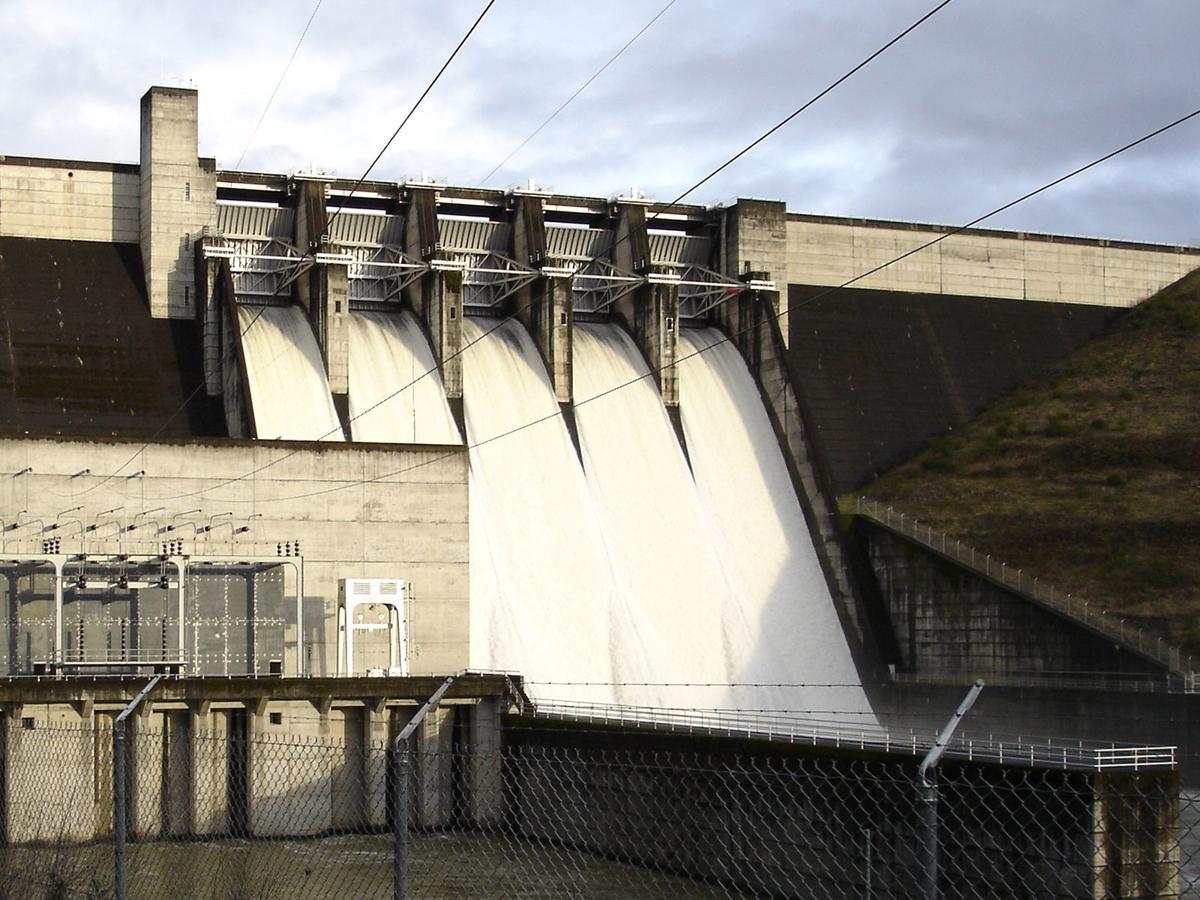 The Lookout Point Dam on the Middle Fork Willamette River is one of 13 in Oregon's Willamette Basin. The U.S. Army Corps of Engineers and Oregon Water Resources Department have proposed specific allocations for the 1.59 million acre-feet stored annually behind the dams. 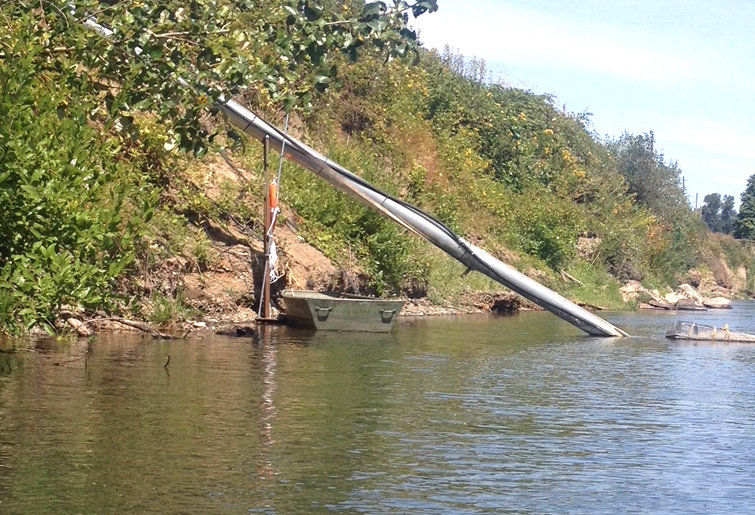 An irrigation intake pipe draws water from the Willamette River in this file photo. The U.S. Army Corps of Engineers and Oregon Water Resources Department propose allocating irrigators 253,500 acre-feet of the 1.59 million acre-feet stored behind 13 dams in the basin.

The Lookout Point Dam on the Middle Fork Willamette River is one of 13 in Oregon's Willamette Basin. The U.S. Army Corps of Engineers and Oregon Water Resources Department have proposed specific allocations for the 1.59 million acre-feet stored annually behind the dams.

An irrigation intake pipe draws water from the Willamette River in this file photo. The U.S. Army Corps of Engineers and Oregon Water Resources Department propose allocating irrigators 253,500 acre-feet of the 1.59 million acre-feet stored behind 13 dams in the basin.

Willamette Valley farmers and ranchers would have rights to about 250,000 acre-feet of irrigation water annually under a reallocation plan suggested by the U.S. Army Corps of Engineers and Oregon Water Resources Department.

The proposal is the latest attempt to decide who gets access to the water stored behind 13 federal dams in the basin. For agriculture, even in the wet Willamette Valley, water availability in spring and summer is crucial.

The Corps’ preferred option allocates more than three times more than what irrigators now draw from the Willamette system, but the Oregon Farm Bureau said that’s not enough.

Cities, industries and fish and wildlife experts and advocates are likely to make the same arguments about their allocation under the plan, and that sets the stage for some tough discussion.

This time, the Corps of Engineers emerged with a proposal that specifically divvies up 1.59 million acre-feet stored annually behind the dams.

“We have just reached the point in the study where we are asking the public to review the tentative plan and provide feedback before a decision is made,” Corps project leader Laurie Nicholas said in a prepared statement.

Here’s the Corps’ suggested breakout. As the name implies, an acre foot is the amount of water needed to cover an acre of land with 12 inches of water:

The latter would be available as needed to supplement specific uses and to provide flexibility as conditions change.

Mary Anne Cooper, public policy counsel for the Oregon Farm Bureau, said the amount assigned to irrigation is “not nearly enough.” She said the bureau has seen demand estimates higher than that, but declined to state a number at this point in the process.

The amount designated for joint use is another concern, Cooper said.

“Our concern is that we will never get to use it,” she said. “We think it will go to fish. We don’t believe we’ll ever see any part of that joint use (amount).”

She said the water allocated to fish and wildlife — protected salmon and steelhead runs are the driving factors — are “more than adequate and too large.”

Cooper said an assured water supply is critical to “realize the full potential of agriculture in the valley.”

Producers are driven by markets, she said, and will grow higher value crops when irrigation is available. It’s difficult to predict what crops will be in demand in the decades ahead, she noted.

“I think the state would be shortchanged to not plan for future ag needs,” she said.

The issue has roots in decisions, missed opportunities and delayed action that date back nearly 80 years.

The Willamette River Basin’s 13 dams were built between 1941 and 1969, and their primary purpose is flood control during the winter months. Congress also authorized the Army Corps of Engineers to operate the dams and reservoirs to generate electricity, provide irrigation, assure water quality, offer recreation and to support fish and wildlife. However, there isn’t a specific amount of reservoir storage allocated for any particular use.

Federal bureaucracy complicates the matter because another federal agency, the Bureau of Reclamation, holds the only water right certificates to the “conservation storage” behind the dams. Under those certificates, all 1.59 million acre-feet in storage is designated for irrigation.

But only 75,000 acre-feet per year is now contracted for irrigation. Cooper, of the Oregon Farm Bureau, said a lack of expensive infrastructure — pipes, pumps and canals — limits how much water farmers draw. In any reallocation solution, the Bureau of Reclamation would have to file with the Oregon Water Resources Department to change how water use is designated.

Cooper said the Farm Bureau is willing to engage with the other stakeholders to find a solution.

The stakes are high. The Willamette River Basin encompasses more than 11,000 square miles, is home to nearly 70 percent of the state’s population and contains its biggest cities — Portland, Salem, and Eugene — many of its major industries and some of its best farmland.

The reallocation work comes on the heels of a six-year Oregon State University research project that used computer modeling to predict water availability, demand and storage in the Willamette River Basin to the year 2100.

The OSU modeling projected Willamette Valley farmers will be planting earlier and will begin irrigating about two weeks sooner than they do now. Climate change most likely will result in wetter winters, OSU researchers said, but the snowpack will be severely reduced and will melt and runoff earlier than it does now.

Rainy winters and springs will be followed by hotter and drier summers, but more farmers will have finished irrigating by the time water shutoffs are contemplated, the research team concluded. Although the reduced snowpack will cause the loss of an estimated 600,000 acre-feet of stored water, it won’t have a significant impact on farmers in the Willamette River basin who rely on rain-fed streams. Farmers in the more arid Eastern Oregon and Deschutes and Klamath basins, however, depend more on melting snow for irrigation water and are more likely to face shortages.

Commentary: Why I chose organic farming