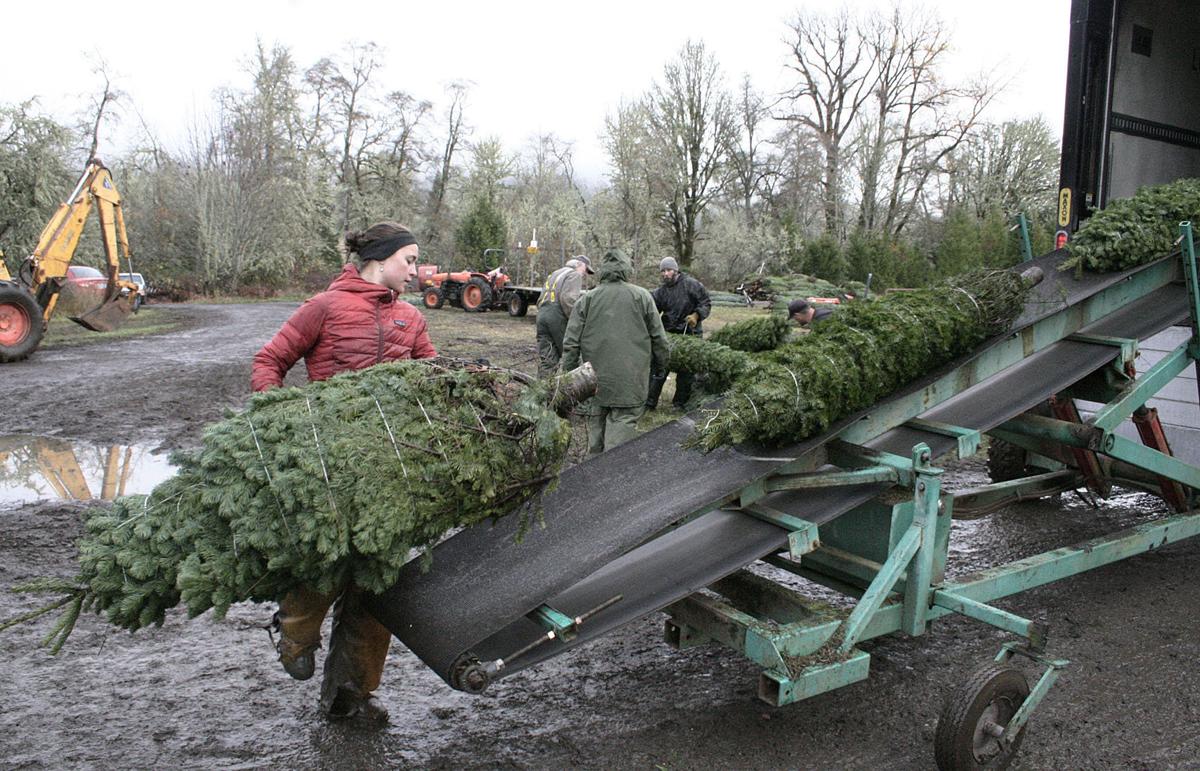 Workers load Christmas trees onto a conveyor in preparation for shipping at Sunrise Tree Farm near Philomath, Ore., which is owned by Pat and Betty Malone. The Christmas tree industry will vote next year whether to continue a research and promotion program. 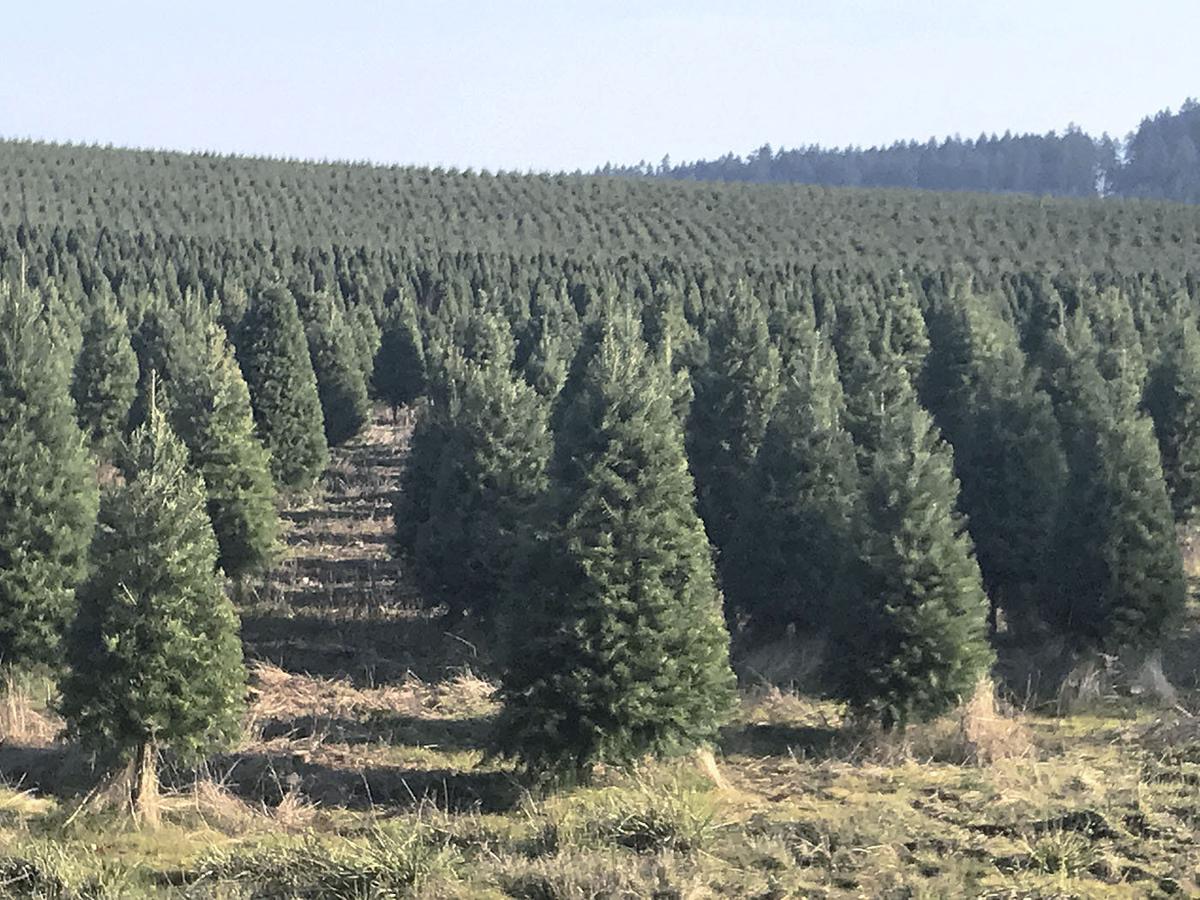 Christmas trees grow in Oregon's Willamette Valley. The Christmas tree industry will vote whether to continue a research and promotion program next year. 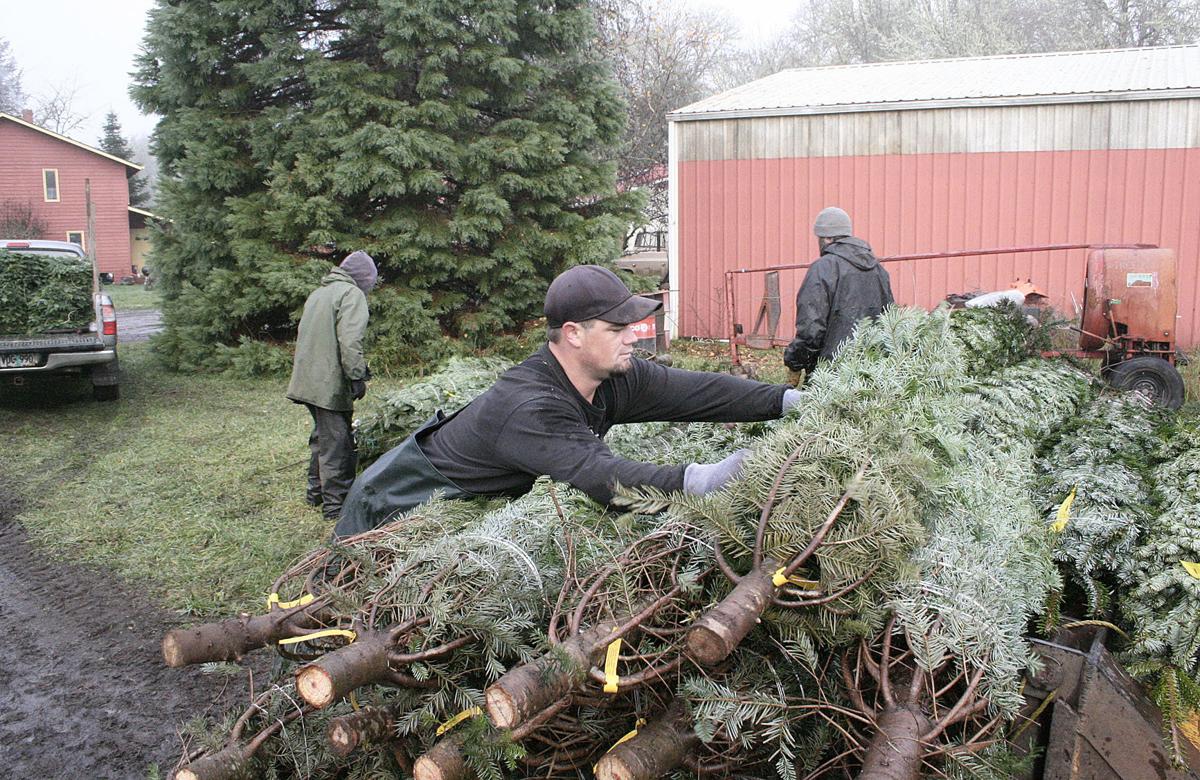 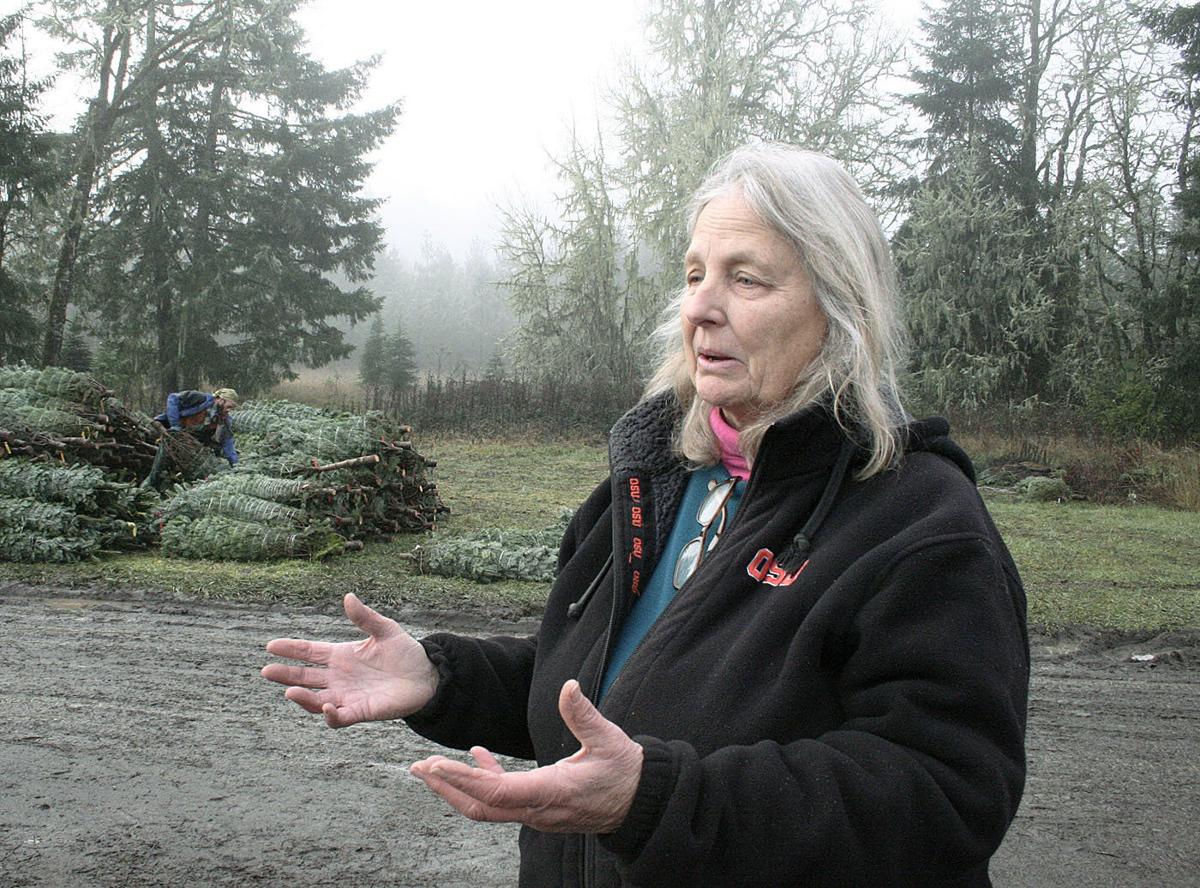 Farmer Betty Malone speaks about the Christmas tree checkoff as trees are prepared for shipping at Sunrise Tree Farm near Philomath, Ore. 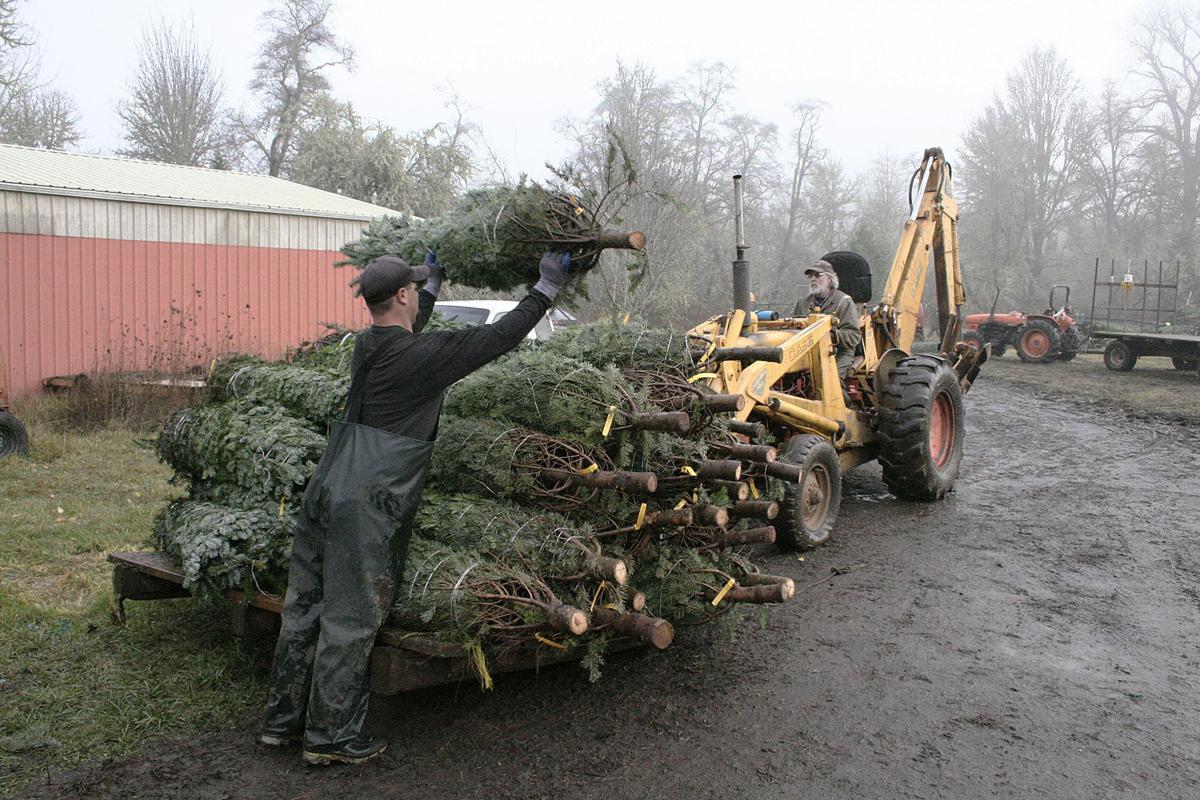 Farmer Pat Malone prepares to move a pallet of Christmas trees with his tractor at Sunrise Tree Farm near Philomath, Ore. 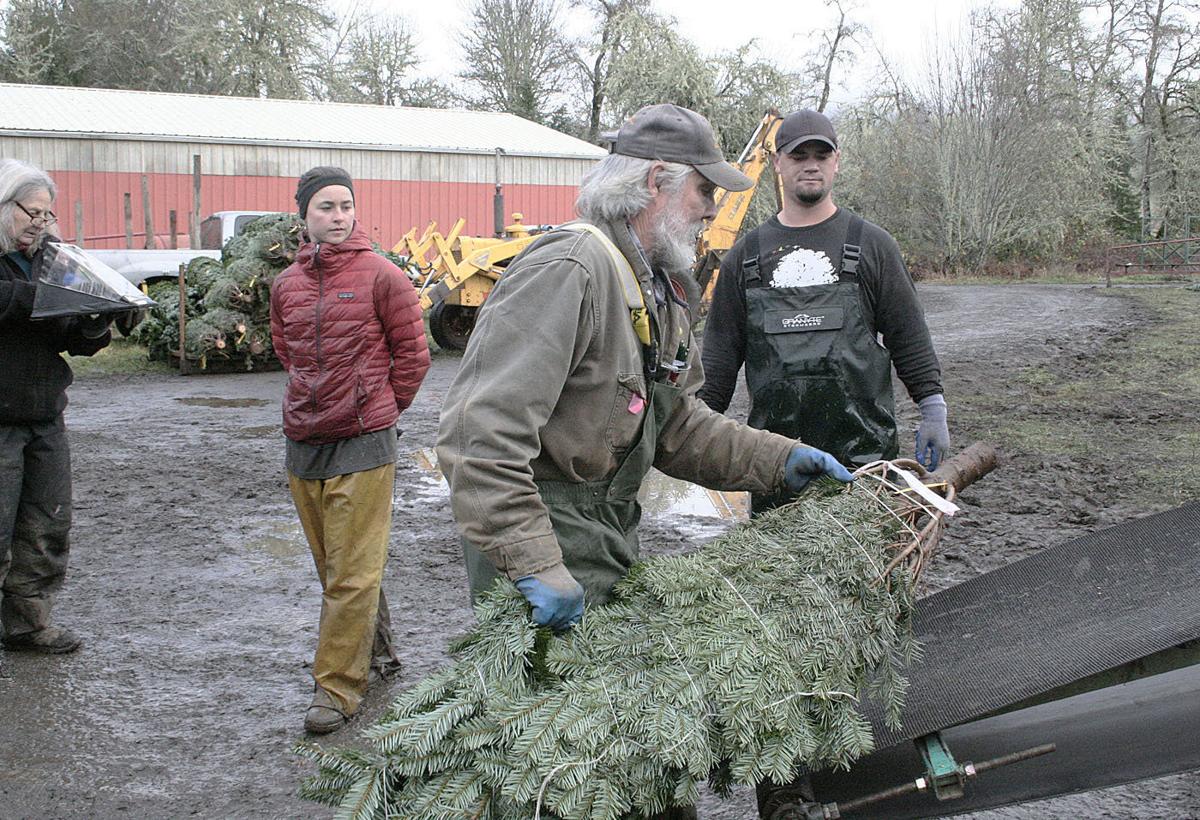 Farmer Pat Malone loads Christmas trees onto a conveyor in preparation for shipping at Sunrise Tree Farm near Philomath, Ore., which he owns with his wife, Betty. 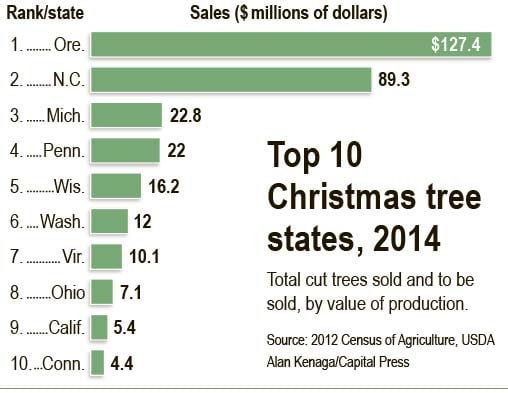 Workers load Christmas trees onto a conveyor in preparation for shipping at Sunrise Tree Farm near Philomath, Ore., which is owned by Pat and Betty Malone. The Christmas tree industry will vote next year whether to continue a research and promotion program.

Christmas trees grow in Oregon's Willamette Valley. The Christmas tree industry will vote whether to continue a research and promotion program next year.

Farmer Betty Malone speaks about the Christmas tree checkoff as trees are prepared for shipping at Sunrise Tree Farm near Philomath, Ore.

Farmer Pat Malone prepares to move a pallet of Christmas trees with his tractor at Sunrise Tree Farm near Philomath, Ore.

Farmer Pat Malone loads Christmas trees onto a conveyor in preparation for shipping at Sunrise Tree Farm near Philomath, Ore., which he owns with his wife, Betty.

In a humorous video viewed more than 300,000 times on Facebook, a Christmas tree grower named Mark ridicules his own lack of social media skills.

Bantering with his daughter in a field of growing trees, Mark repeatedly mistakes the names of several popular social media applications: “Face Face” instead of Facebook, “Snaptalk” instead of Snapchat, “Tweezer” instead of Twitter.

The video concludes with a positive message, as Mark tells the viewers, “Forget all that. Get your family together, head out and pick a real Christmas tree!”

The light-hearted video also illustrates a real-life dilemma for the Christmas Tree Promotion Board, which produced the video as part of its new social media-driven promotional campaign, “It’s Christmas. Keep It Real.”

The board was launched by USDA in 2015 at the request of farmers who wanted to raise funds for industry promotions and research with a “checkoff” fee of 15 cents per tree, generating roughly $1.8 million a year.

But unlike the young consumers who are targeted by its promotional campaigns, some farmers who pay for the program are indifferent to social media. This year, the board invested $1.1 million in promotions.

The question is whether farmers will be supportive of continuing to pay for a promotional strategy that some may find confusing or unfamiliar. The answer will be provided next year, when Christmas tree farmers across the U.S. will vote whether to retain the program.

Despite his apathy toward social media, Schaefer said he recognizes the program’s value because the Millennial generation — people born between 1978 and 1998 — consumes information differently.

“They don’t read newspapers or watch TV,” he said.

Retailers have told Schaefer the promotional campaign is effective, which is important if real Christmas trees are to remain a viable retail item, he said.

“If they can’t sell the trees, it’s going to trickle down to the farmer,” Schaefer said. “They’ve got to get a return on their investment.”

Christmas trees are grown by about 3,400 U.S. farmers on 178,000 acres, generating roughly $367 million in annual sales, according to USDA data from 2014, the most recent year available.

Generally, it appears that farmers who are part of the Christmas tree industry support the checkoff and are excited to see their crop promoted, said Tim O’Connor, the board’s executive director.

However, there is a small contingent of farmers who happen to grow Christmas trees but don’t see the crop as their main specialty and may not care about paying for promotions, he said.

Whether these less-invested growers will favor continuing the program — and how much they will influence the referendum — will remain a mystery until the votes are tallied, since the board doesn’t plan to devote money to conduct polling, O’Connor said.

In the board’s early days, some older farmers didn’t understand the social media emphasis of the promotional campaign, but they’ve since warmed to the concept, said Phil Hunter, president of the Pacific Northwest Christmas Tree Association and a grower near Port Orchard, Wash.

“As an industry, I think we’d be foolish not to pass the referendum,” he said.

A couple hundred growers don’t use email, so the board must make a special effort to keep them in the loop about promotions, said Betty Malone, a farmer near Philomath, Ore., who spearheaded the effort to start a checkoff.

The program will do more outreach through traditional mail, in case digital communications aren’t reaching the decision-makers at a farm, she said.

“Where I get my information is not where my kids get their information,” Malone said.

Regardless of the potential generational disconnect over social media, some growers object to the checkoff for philosophical reasons.

Robert Brown, a Christmas tree grower in New York, said he’s comfortable with promoting his own business over social media but doesn’t like the idea of a mandatory program.

“To me, it’s just another form of government: Let’s tax the little people,” Brown said. “They mean well. I’m just not sure it’s something I want to be involved with, but I’m stuck with it.”

His sentiment is echoed by Edward Steigerwaldt, a Wisconsin tree producer, who doesn’t see the purpose of spending on promotions when there’s a shortage of Christmas trees.

Several years ago, growers cut back on planting trees after overproduction put prices in a slump and forced some out of the industry. The pendulum has now swung the other way, with tight supplies bringing up prices. Wholesale prices to growers are in the range of $17 per tree for Douglas firs, up from about $10 during the slump, while Noble firs are selling for about $30 per tree, up from about $18.

It’s unlikely the industry will see another major surplus soon, particularly since farmers are getting older and leaving the business while younger people are reluctant to enter it, Steigerwaldt said.

“There are so many people who don’t want to do this type of work,” he said.

While Steigerwaldt believes the checkoff was created at the behest of “big growers,” a major Christmas tree producer shares his lack of enthusiasm.

Holiday Tree Farms, a company based in Corvallis, Ore., that sells up to 1 million trees a year, is willing to go along with the program but doesn’t see a direct benefit, said Greg Rondeau, its sales manager.

The firm sees more value in working directly with its chain store customers, which can afford to pay for a national television advertising blitz, he said.

“It’d be difficult for the checkoff to come up with that kind of money,” Rondeau said.

Farmers who support the program see such arguments as short-sighted.

Promoting the Christmas tree industry as a whole — rather than farmers promoting themselves individually — is necessary to keep the crop relevant in consumers’ minds, according to checkoff supporters.

A sustained promotional campaign is the best way to accomplish that goal, said Jim Rockis, the board’s chairman and a West Virginia farmer.

“Changing a mindset takes time,” Rockis said. “You’re not going to do this overnight.”

Aside from promotions, the checkoff also raises funds for agronomic research across several regions, he said.

The program is investing about $300,000 with eight universities, which will test new tree species, study disease problems and seek new slug control methods, among other projects.

Unless growers are willing to pay for the studies, they may simply never be done, Rockis said. “A lot of funding for extension and land grant universities, especially for minor crops like Christmas trees, is no longer available.”

“We need to go toe-to-toe with them as best as we can,” he said.

Consumer research conducted by the board found that Christmas tree growers face serious obstacles in winning over Millennial consumers, the next generation to form families, O’Connor said.

“This is really a critical factor for the industry to understand,” he said.

One serious misconception is that artificial trees are environmentally superior to real trees because they’re not chopped down.

Most Millennials hold this view, not understanding that Christmas trees are specifically planted to be harvested as a farm crop, similar to Halloween pumpkins, O’Connor said.

Only about 32 percent of Millennials grew up celebrating Christmas with a real tree every year, compared to 57 percent for the baby boomer generation, the board’s research found.

People who grow up with artificial trees are more likely to buy them when they form families, O’Connor said. “That’s the experience they had as a kid.”

To counter these forces, the promotional campaign focuses on three core messages.

The first is that real trees are better for the environment because they absorb carbon and release oxygen while they grow, then can be recycled or mulched instead of spending thousands of years in a landfill.

The second is that choosing a real tree is a fun family experience that people will cherish and remember for years. It’s also a way to connect directly with agriculture, which Millennials desire.

The third is that real trees create business for American farmers, as opposed to overseas manufacturers who rely on petroleum-based plastics.

Due to consumer research and a strong public response, the board decided on a social media-heavy campaign that focuses on about 30 videos created by Concept Farm, an advertising agency in New York City.

In its advertisements, the program must be careful not to be derogatory toward artificial trees, which is prohibited by USDA, O’Connor said.

For example, an advertisement comparing them to toilet brushes was rejected by the agency, he said.

On the other hand, the program can discuss how artificial trees are manufactured and disposed of, O’Connor said. “We can deal with facts.”

USDA’s edict against negative campaigning even extends to the term “fake,” which the board can’t use in its promotions, said Malone, a farmer and board member.

“They think of it as a pejorative,” she said.

Print, online and television reporters can pull information from the program’s media resources, such as a “myth-busting” infographic about Christmas trees.

The board is sponsoring Christmas tree lightings in multiple major cities and conducting a “satellite media tour” with several news stations, which will conduct remote interviews with a Christmas tree farmer.

Several lifestyle bloggers, who typically have a reach of a quarter-million readers, are being targeted as “social influencers” who can advise their followers on the benefits of real trees.

The 200,000th tree will be delivered to military families through the “Trees for Troops” program, which will be highlighted in promotions.

Throughout these different communication channels, the program’s three core messages are heavily emphasized.

“People should be proud of their decision to have a real tree,” said Malone.