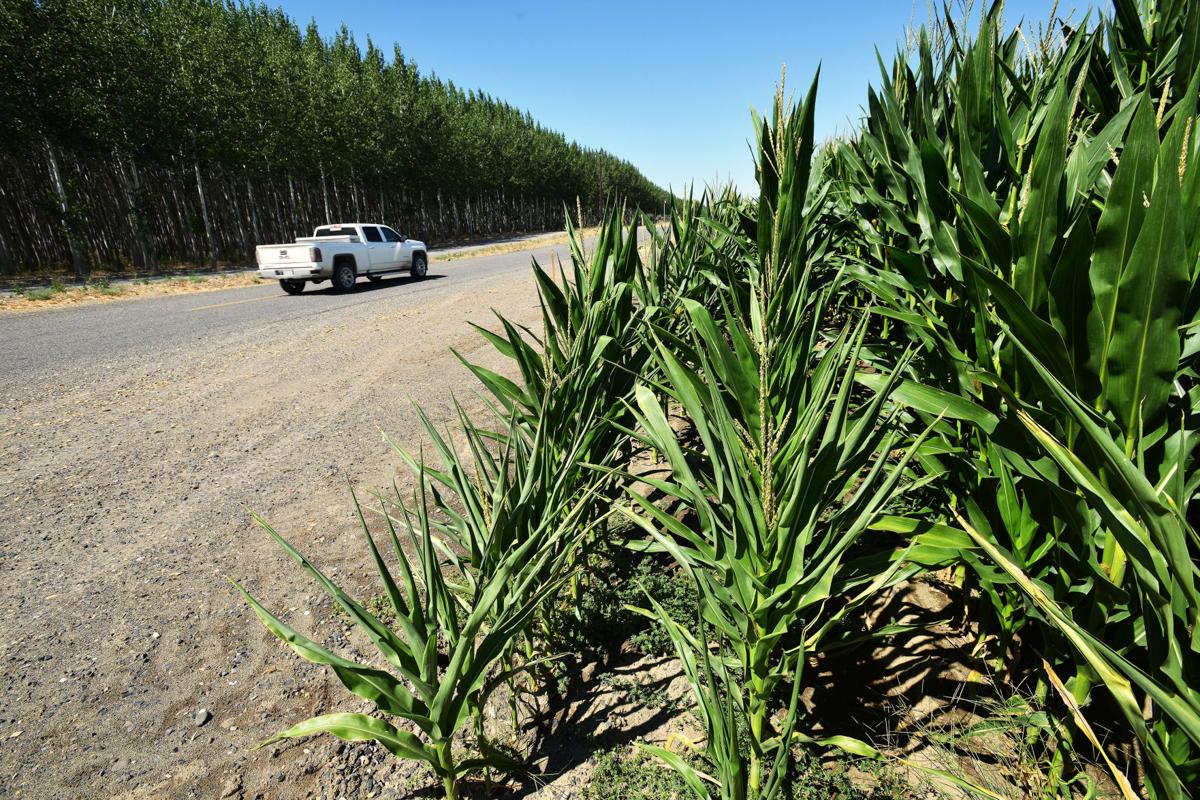 A truck drives down Poleline Road between poplar trees on the left and a corn field on the right as the transition begins at the Boardman Tree Farm from trees to food. 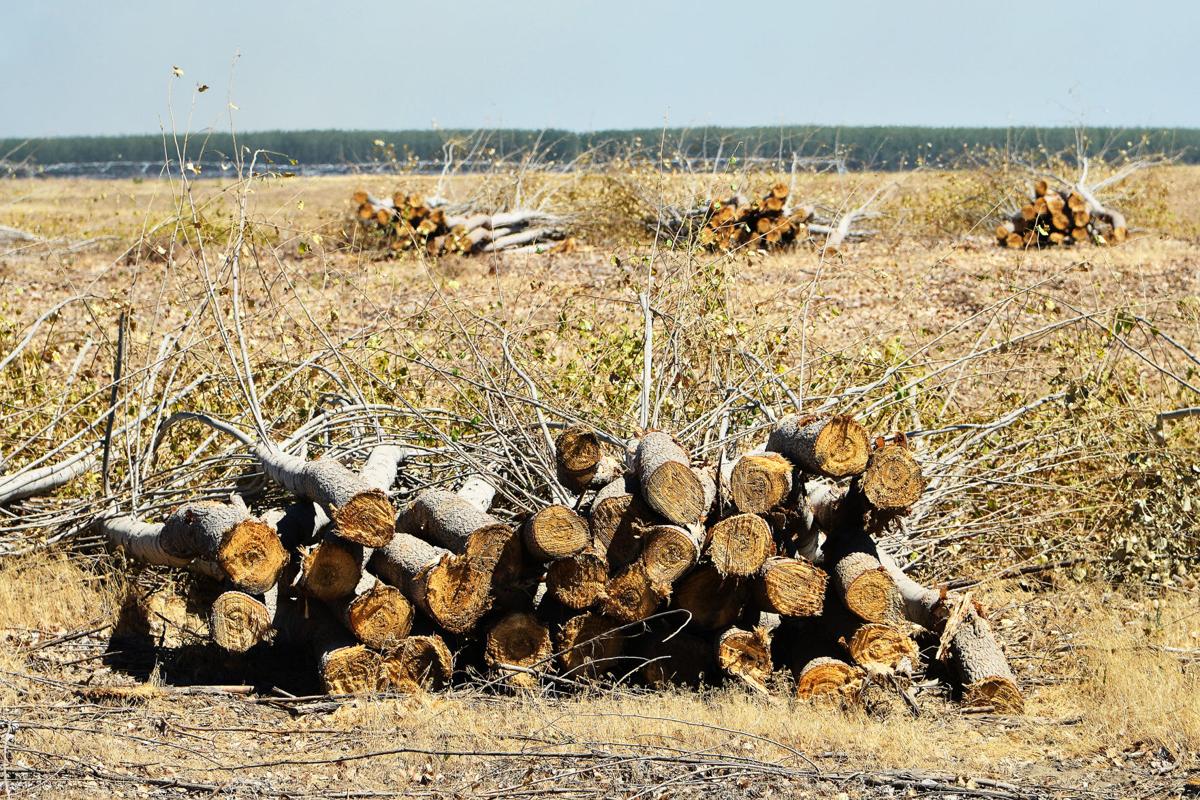 Piles of cut poplar trees sit in a field Friday at the Boardman Tree Farm. 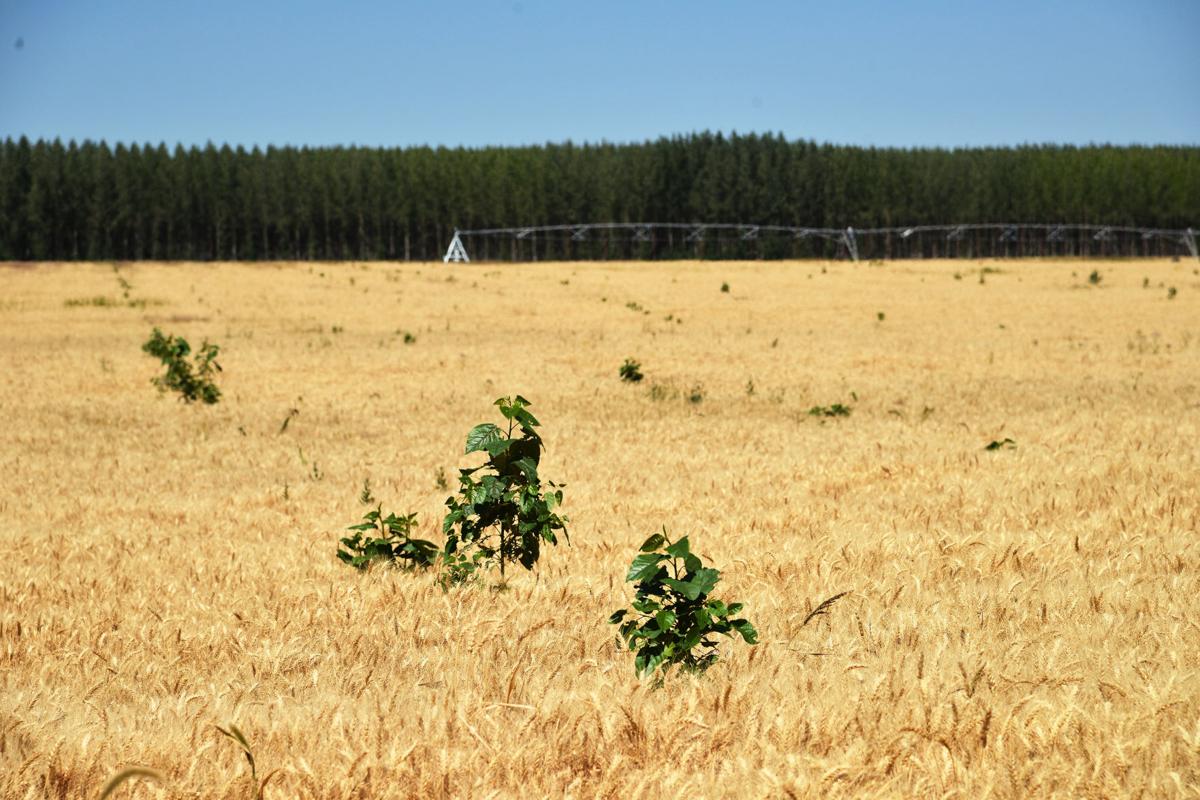 Volunteer poplar trees grow up in a field of wheat at the Boardman Tree Farm.

A truck drives down Poleline Road between poplar trees on the left and a corn field on the right as the transition begins at the Boardman Tree Farm from trees to food.

Piles of cut poplar trees sit in a field Friday at the Boardman Tree Farm.

Volunteer poplar trees grow up in a field of wheat at the Boardman Tree Farm.

Once a captivating landmark along Interstate 84 in Eastern Oregon, the Boardman Tree Farm is quickly disappearing to make way for more conventional crops and cows.

GreenWood Resources, headquartered in Portland, sold the land earlier this year and already large swaths of poplars have been cut down and replaced with irrigation pivots. Approximately one-third of the 25,000-acre property is slated to become a dairy farm — permit pending — while the rest was purchased by AgriNorthwest, based in the Tri-Cities.

Will Evans, division controller for AgriNorthwest, said the plan is to convert all acreage into cropland as the remaining trees are harvested. Evans said the transition has gone better than expected since the company took over in February.

“It’s a beautiful piece of property,” he said. “This is a great place to farm.”

Terms of the deal, which included both the land and water rights from the Columbia River, were not disclosed. AgriNorthwest grows a variety of local staples, including potatoes, corn, wheat and carrots.

Don Rice, director of North American operations for GreenWood Resources, said it will likely be a few years before all the trees are gone. Part of the wait, he said, is to allow younger trees to finish growing before they are ready to be processed. Another part is based on what the markets will bear.

The Collins Companies informed Morrow County officials they will permanently shut down the Upper Columbia Mill by the end of October, with most of the facilities’ 67 employees laid off by Sept. 19. However, Rice said the Columbia Forest Products veneer mill is still open, and GreenWood will continue to sell wood chips to pulp and paper mills.

The Boardman Tree Farm has been around since 1990, and has become a popular attraction for visitors to the community. Residents will have one more chance to bid farewell to the tree farm during the final “Very Poplar Run,” a charity 5K, 10K and 15K race that benefits the Agape House in Hermiston.

Rice said they are planning to make this year’s event extra special.

“The idea is to do it up real nice for the last event,” he said.

More than 7,000 acres of the tree farm also sold to Lost Valley Ranch, formerly Willow Creek Dairy, which is proposing to bring in 30,000 cows on ground east of where Homestead Lane intersects with Poleline Road. The dairy, owned by Greg te Velde, is in the process of obtaining a confined animal feeding operation, or CAFO, permit with the state. If approved, it would become the second-largest dairy in Oregon behind only nearby Threemile Canyon Farms.

The permit regulates how Lost Valley Ranch would handle wastewater and manure generated on site to protect surface water and groundwater. A public hearing on the permit was held Thursday at the Port of Morrow in Boardman, with the majority of comments in favor of the proposal.

Wayne Downey, of Hermiston, managed the design of the facility, which he said uses the best management practices and latest technology. The design calls for open top lagoons capable of holding 260 acre-feet of liquid manure, which is then recycled and applied onto farmland for growing animal feed.

Lagoons are to be built with a synthetic liner and leak detection system to protect groundwater. The farm will conduct annual soil monitoring and quarterly sampling of monitoring wells, according to its application.

“Sustainable agriculture is really what we’re talking about here,” Myers said. “This whole operation is really a recycling venture, where the cows are the main benefit.”

Morrow County Planning Director Carla McLane presented comments on behalf of the county court, which were not necessarily in opposition of the project, but did pose some concerns. McLane said the dairy would be located within the Lower Umatilla Basin Groundwater Management Area as well as three different critical groundwater areas, which raises questions about water use and contamination.

“We’re not unfamiliar with (land application) here in Morrow County, but we have to find a way to balance that with historical impacts of high nitrogen levels in the groundwater,” McLane said.

Written public comments will be accepted through Thursday, Aug. 4 on the project. There is no timetable for a decision to issue the permit, which is done jointly by the Oregon Department of Agriculture and Department of Environmental Quality.