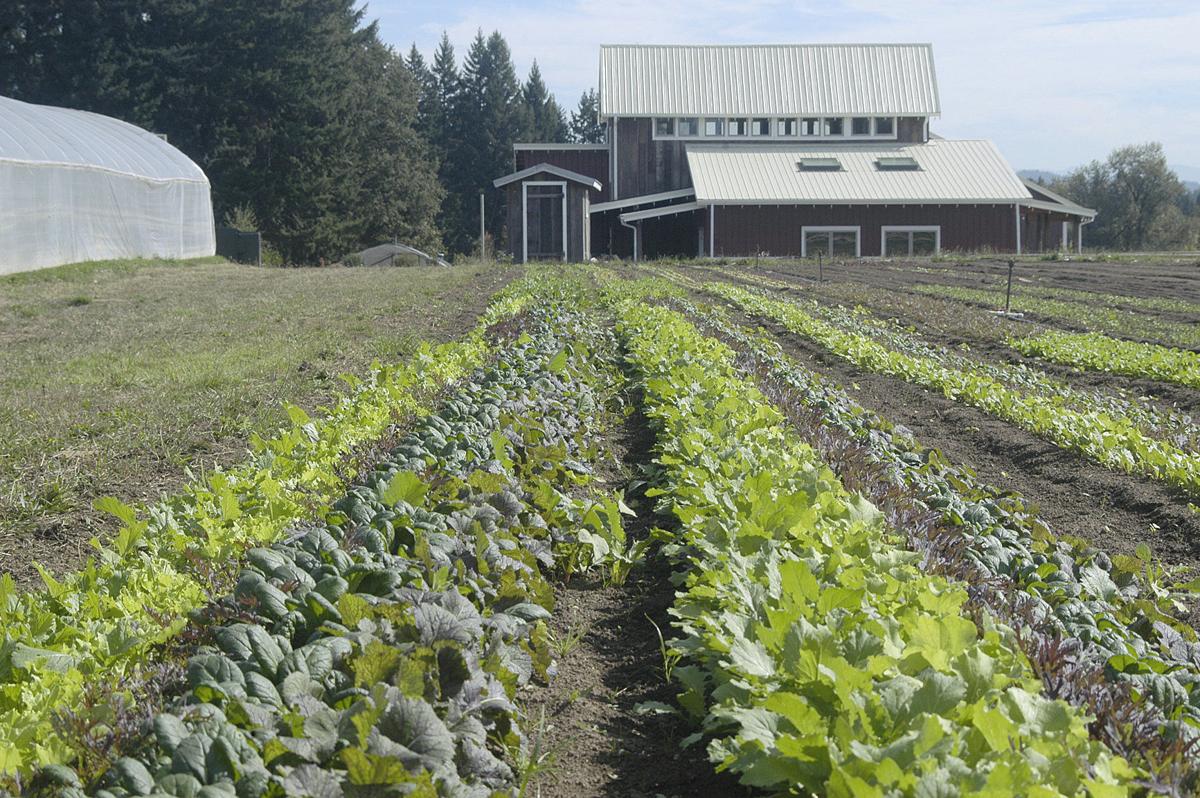 Our Table, a 58-acre co-op farm near Sherwood, Ore., has a small store and a commercial kitchen, hosts dinners, sells to restaurants, farmers' markets and a CSA, uses solar energy to power its irrigation and refrigeration needs, and functions like a collective. 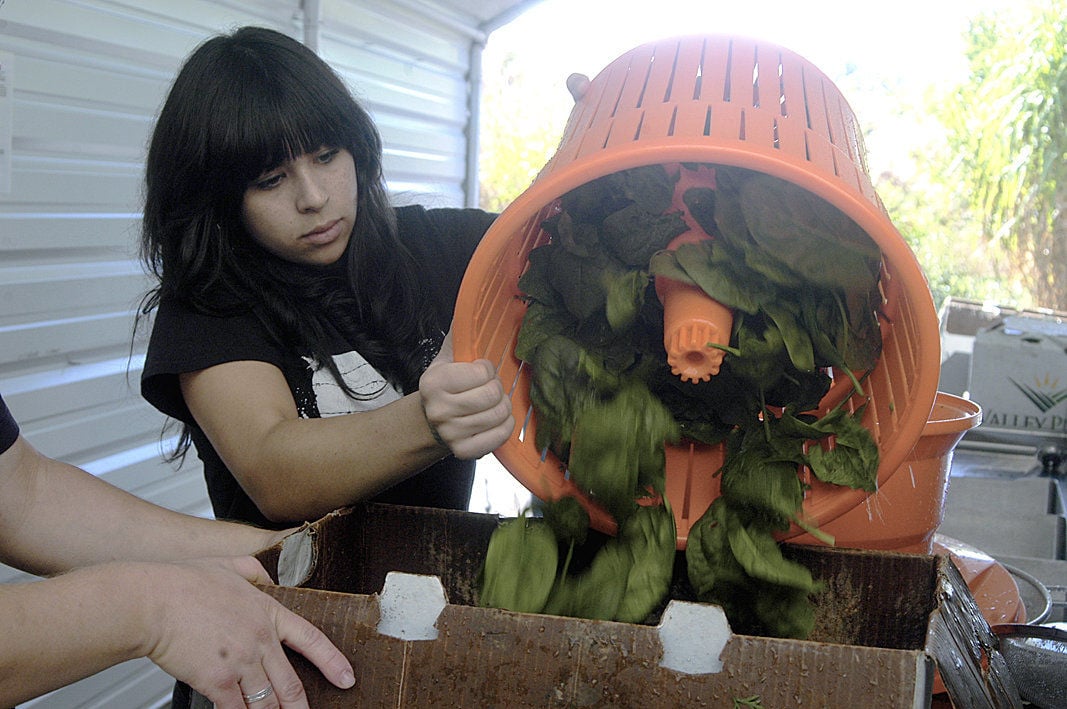 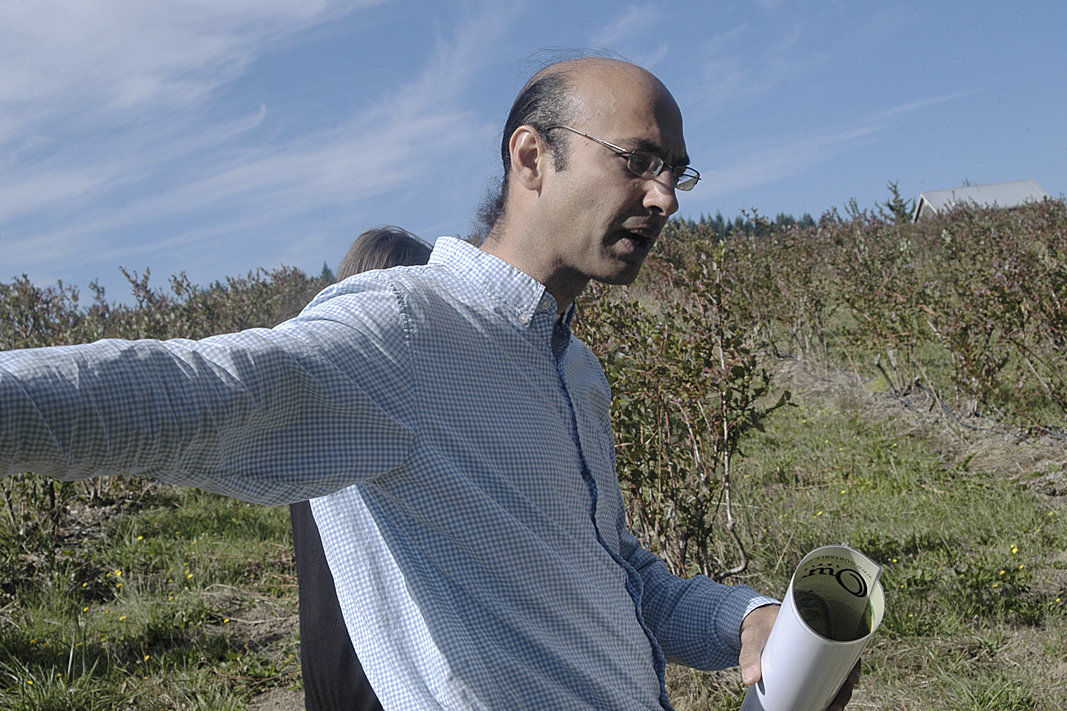 Our Table Cooperative co-founder Narendra Varma, leads a tour of the 58-acre collective farm near Sherwood, Ore. He says the ownership model is intended to sustain the land in farming. 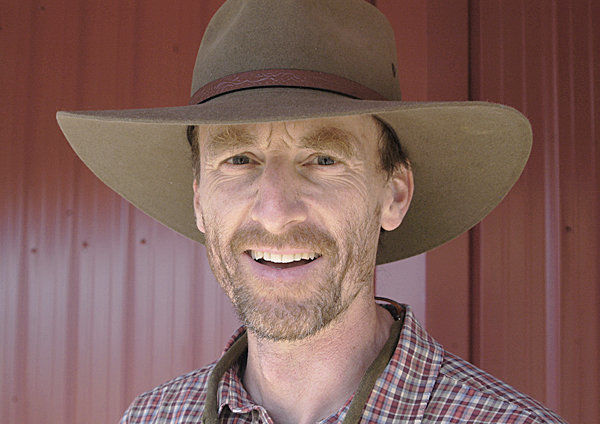 Josh Volk of Portland, Ore., has written a book about small farms and consults on their operations. He's also a mechanical engineer who designs and builds handcarts and other tools scaled for use on small farms. 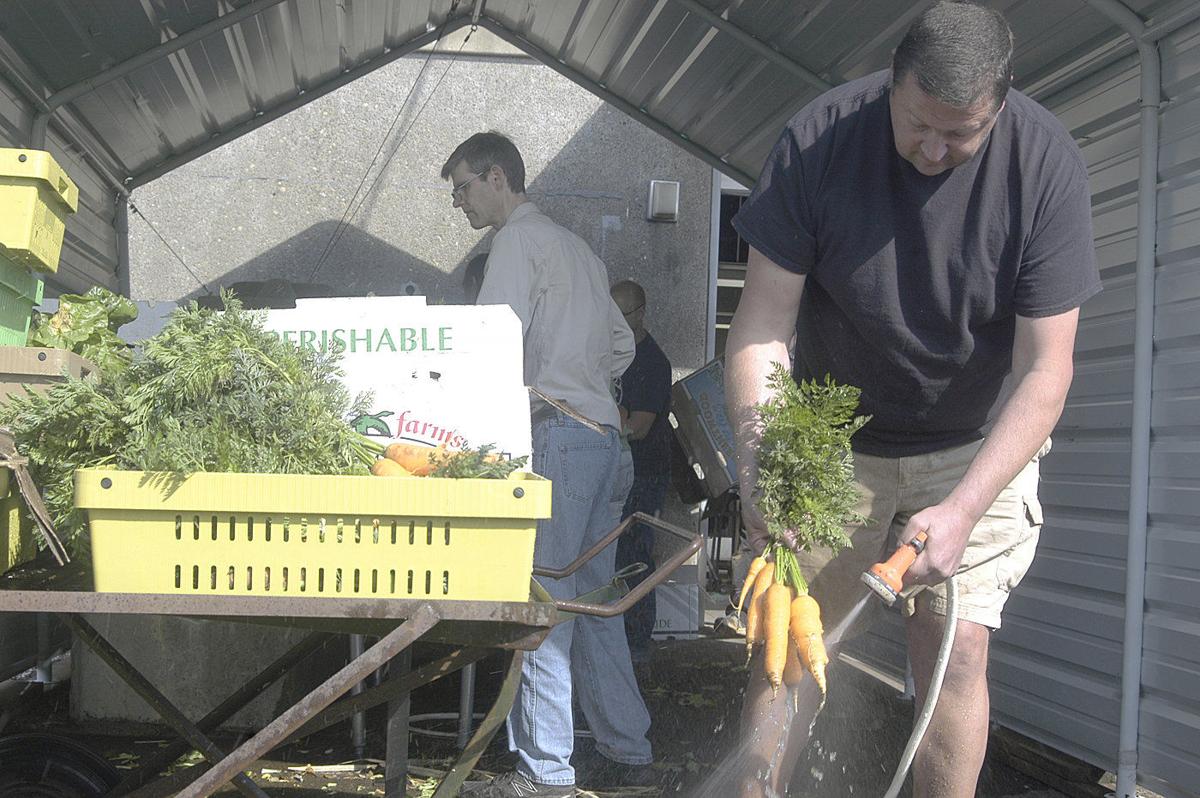 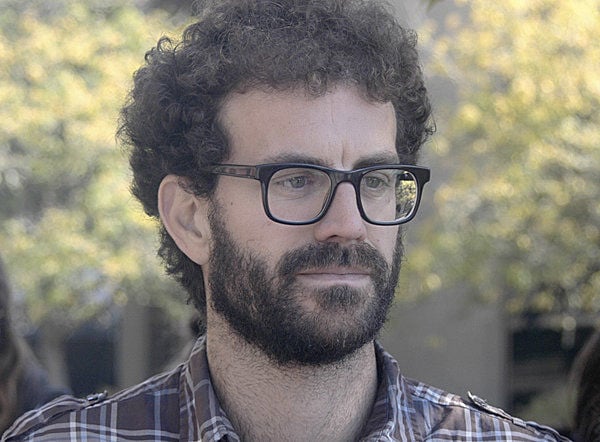 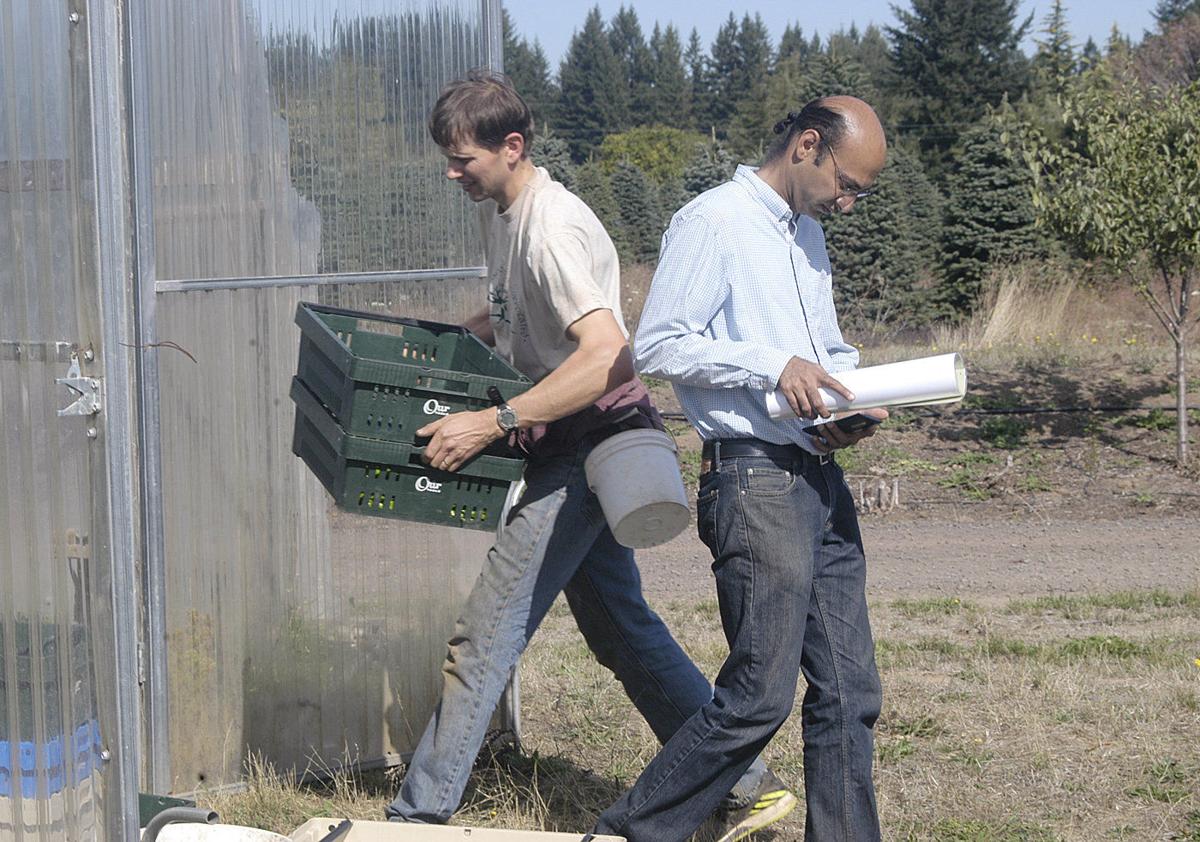 Our Table farmer-member Steve Radtke, left, and co-founder Narendra Varma cross paths at one of the farm's greenhouses outside Sherwood, Ore. The farm functions as a collective, with workers, consumers and commercial partners sharing risks and rewards.

Our Table, a 58-acre co-op farm near Sherwood, Ore., has a small store and a commercial kitchen, hosts dinners, sells to restaurants, farmers' markets and a CSA, uses solar energy to power its irrigation and refrigeration needs, and functions like a collective.

Our Table Cooperative co-founder Narendra Varma, leads a tour of the 58-acre collective farm near Sherwood, Ore. He says the ownership model is intended to sustain the land in farming.

Josh Volk of Portland, Ore., has written a book about small farms and consults on their operations. He's also a mechanical engineer who designs and builds handcarts and other tools scaled for use on small farms.

Our Table farmer-member Steve Radtke, left, and co-founder Narendra Varma cross paths at one of the farm's greenhouses outside Sherwood, Ore. The farm functions as a collective, with workers, consumers and commercial partners sharing risks and rewards.

On an Oregon farm, a collective vision creates a different agricultural model

SHERWOOD, Ore. — Is this the changing face of Oregon agriculture?

Our Table Cooperative, a 58-acre farm 20 miles southwest of Portland, functions as a collective, with workers, regional producers and consumers buying memberships and sharing risks and rewards.

The farm grows blueberries, apples and an ocean of greens, plus chickens for eggs and meat. It has a small grocery store where it sells its own products and those of producer members. Adjacent to the store is a commercial kitchen, used when hosting farm dinners at $90 a pop. Solar panels provide most of the electricity needed for irrigation and refrigeration. The farm’s delivery vehicle is a commercial-sized Mercedes van.

Its co-founder is Narendra Varma, 47, an Indian-born, American-educated and citizen “visionary,” as a friend calls him, who left Microsoft in 1998 with what he describes as a “stock-option fueled financial windfall” and set out to do some good with it.

After an “obligatory globe-trotting walkabout” and some years involved in property development, he settled on agriculture and its ecological and economic connection to nearly everything, from climate change and social justice to nutrition.

Drawn by Oregon’s land-use laws that protect farmland, he and his wife, Machelle, also a Microsoft refugee, moved from Seattle in 2010 intending to create a farm based on a model of “permaculture.” That is, an agricultural and even social system that mimics natural ecosystems.

Varma believes Our Table Cooperative is an alternative to a food system that she says is broken, unhealthy and mired in “hidden cultural stuff.”

“The problem’s not one of how to grow a better carrot,” Varma said. “It’s much more pervasive and deeper than that.

He isn’t alone in his thinking.

“We have a generation of people in their 20s and 30s who are interested in going into farming as a business and as a statement of how they see the world,” said Garry Stephenson, director of Oregon State University’s Center for Small Farms and Community Food Systems.

While the number of small farms counted in the 2012 Census of Agriculture actually declined compared to the 2007 census, their impact in urban areas is considerable.

In Portland, self-described homesteaders converted abandoned city lots into specialty herb gardens and sell to high-end restaurants. Others invent tools scaled for small farms, such as battery-powered tillers and adjustable handcarts equipped with bicycle tires. Some carve out a living by hosting farm dinners, selling at farmers’ markets and delivering to community supported agriculture customers.

Increasingly, small farms are gaining institutional recognition and help. OSU’s small farms center and extension programs help beginning and small farmers, while the USDA provides grants and expertise through agencies such as the Natural Resources Conservation Service and National Institute of Food and Agriculture.

In many cases, the agencies are interacting with people who were drawn to farming by a sense that the food system doesn’t work and that regionally, at least, they can fix it.

Josh Volk of Portland, a mechanical engineer who turned his skills to designing and building farm tools, said farming is attracting people who have worked in other industries or businesses.

Volk, a consultant who helped design Our Table and who has written a manuscript profiling four farms of less than five acres, said environmental concern is a common entry point for new young farmers, and agriculture is an outlet.

“If you’re going to be growing things, you have to be nurturing in some sense,” he said. “It’s not a coincidence.”

It’s a movement that shows no sign of fading. In September, more than 200 people attended a one-day small-farm school put on by OSU. Also this fall, Clackamas Community College southeast of Portland became the first school in Oregon to offer a certificate in urban agriculture.

The program attracted students such as Andrew Watson, a former statistical engineer for Netflix who, with his wife, is looking to buy a small farm in Oregon. He grew up on a conventional dairy farm in the United Kingdom and now hopes to grow vegetables and have dairy goats and chickens.

“I devoted myself to high-tech, now I’m devoting myself to producing food,” Watson said with a smile. “It’s quite a content switch, but you’re still producing something people enjoy.”

Fellow Clackamas student Chad Bennett was a recruiter for high-tech companies in the Portland area such as Intel before getting laid off. He decided to pursue his real interest, growing food, and established a farm on the one-fifth acre he owns in East Portland. His wife continues to work in high-tech while Bennett grows leafy greens, root crops and salad mixes.

He said Portland is a food-conscious city that supports such ventures.

“It will be more sustainable if people are growing food right around them,” he said. “Otherwise you’re using a truck and driving it across the country.”

Community college instructor Chris Konieczka said some in the urban agriculture program are simply looking to have the “sweetest” home garden, indulge a hobby or make a little money on the side. He said others pursue it as an issue of “food justice” — the concern that the poorest people can’t afford or don’t have access to nutritious food.

“We’re kicking in a little bit of difference to the world,” he said, “and that feels good.”

Our Table Cooperative, the Sherwood farm, incorporated in 2013 and was founded on that notion of change.

Varma and his wife chose the site carefully, buying land that was close to Portland’s supportive foodies and access to the urban amenities that would be attractive to workers.

They looked for land with good soil and existing water rights, the lack of which hampers many beginning farmers. They purposefully sought property whose previous owners had been through Oregon’s Measure 37 and Measure 49 land-use process, and won the transferable right to eventually add two more residences. Most development is not allowed on Oregon farmland.

When built, those houses will be rented to workers. Varma hopes workers will be attracted by a trade-off of reduced income in exchange for subsidized rent and subsidized food from the farm.

Rather than focus on one crop — by expanding the blueberry acreage that was already in place, for example — the farm grows multiple types of vegetables, berries, flowers and fruit.

“What we lose in efficiency, we gain in resiliency” through diversification, Varma said.

Varma said the farm produces a lot of food but is not yet making a profit and so hasn’t yet paid dividends to co-op members. The farm hopes to make a profit by 2017.

Farm membership shares cost $5,000 for workers; $1,500 for producers and $150 for consumers. Workers can pay the fee up front or with a down payment and payroll deductions. The farm pays a minimum wage of $10.40 an hour for farmer members and no more than two times that for managers. The wage rates are based on the Massachusetts Institute of Technology’s living wage calculator for the Portland metro area. Varma said MIT recently increased its Portland calculation to $11.25 an hour but the farm can’t catch up to that until 2016. The farm’s three owner groups are represented by a board of directors.

Gianna Banducci, Our Table’s marketing director and a cooperative member, said the farm has had a mixed reception from conventional farmers. Some are apprehensive or merely curious, others identify with the challenges of starting a small, diversified farm.

“For myself, personally, I’ve never worked harder, I’ve never put myself into a job like this,” she said. “At the end of the day, it’s mine. If it doesn’t get done, it’s because I didn’t do it.”

Varma’s overriding concern is maintaining the land for farm use over generations. The average age of American farmers is 57, near retirement, and developers may be the only ones with enough money to buy farmland outright.

The shared ownership model, or holding land in a public trust and leasing to new farmers, may be alternatives, he said.

“We knew we wanted to manage the land with an eye to long-term health,” Varma said.

Idaho board stands by USDA Wildlife Services to control wolves