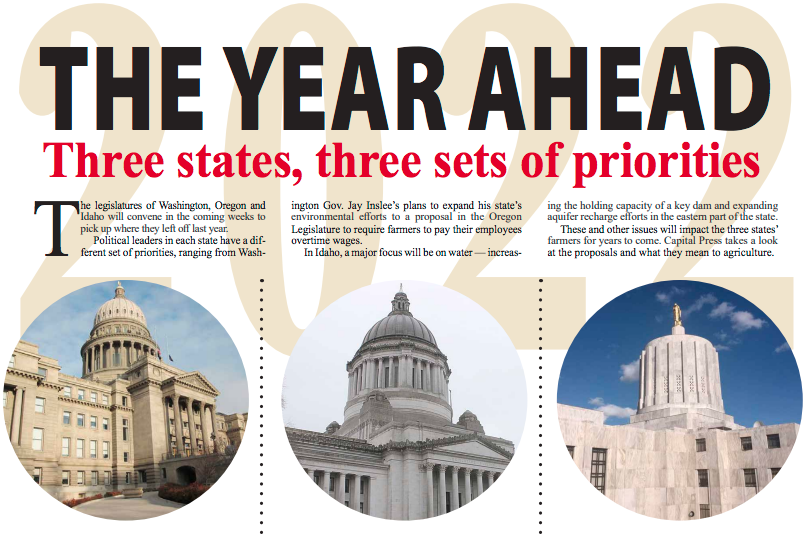 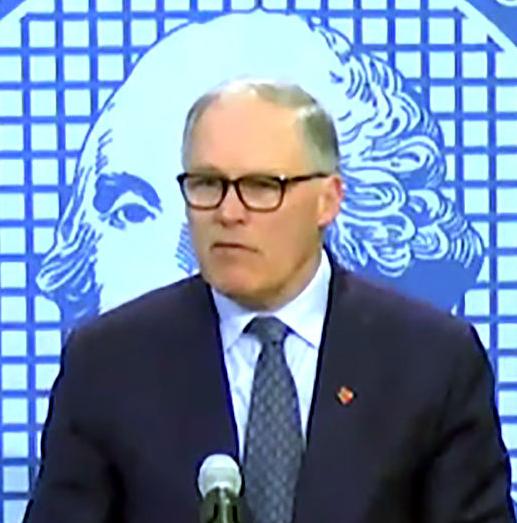 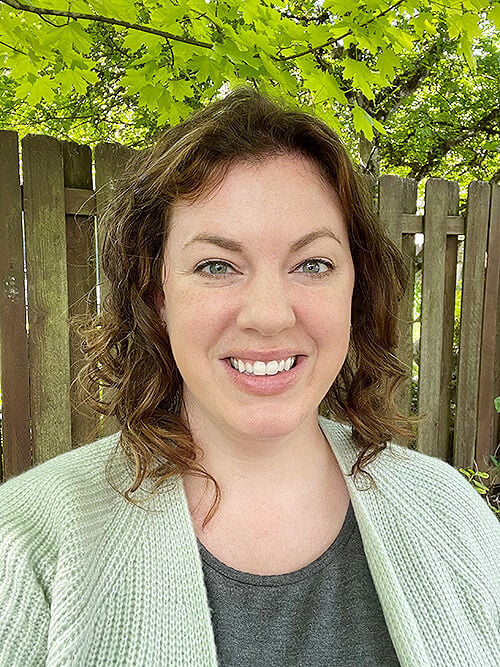 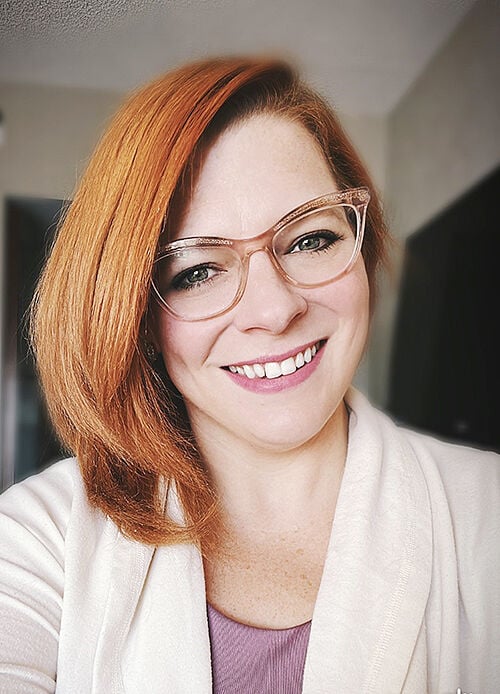 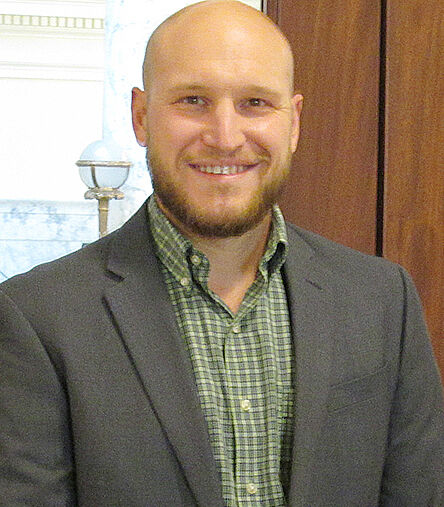 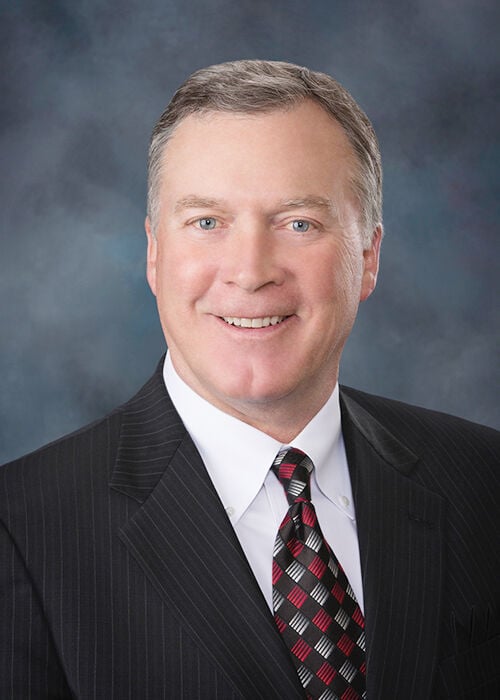 The legislatures of Washington, Oregon and Idaho will convene in the coming weeks to pick up where they left off last year.

Political leaders in each state have a different set of priorities, ranging from Washington Gov. Jay Inslee’s plans to expand his state’s environmental efforts to a proposal in the Oregon Legislature to require farmers to pay their employees overtime wages.

In Idaho, a major focus will be on water — increasing the holding capacity of a key dam and expanding aquifer recharge efforts in the eastern part of the state.

These and other issues will impact the three states’ farmers for years to come. Capital Press takes a look at the proposals and what they mean to agriculture.

SALEM — Farm groups and labor advocates are expected to be preoccupied with agricultural overtime wages during Oregon’s month-long legislative session that begins on Feb. 1.

The prospect of eliminating the agriculture industry’s exemption from higher overtime wages got a lot of attention from lawmakers last year, but attempts to negotiate a compromise have been complicated by litigation over the issue.

A lawsuit alleges the exemption lacks an underpinning in state law and isn’t constitutional because farmworkers are excluded from “privileges” enjoyed by other employees.

It’s been an unsettling experience for farm representatives, who were negotiating in “good faith” with labor advocates who were “looking at us in the eye” while planning the legal attack, said Mary Anne Cooper, vice president of public policy for the Oregon Farm Bureau.

The overtime issue has been presented as a “racial equity agenda item,” but in reality, ending the exemption wouldn’t put more money into farmworkers’ pockets, she said. “It’s just not going to be the result because our members can’t afford to pay more wages.”

Proponents of ending the overtime exemption seem to believe farmers can just raise their prices, when they’d actually be forced to limit employee hours to contain labor costs, said Jeff Stone, executive director of the Oregon Association of Nurseries.

“Clearly, we need to use different words because they don’t understand the price-taking side of ag,” he said.

Another major natural resource proposal before Oregon lawmakers will be the compromise deal between environmental groups and the timber industry, under which logging buffers near streams would be expanded.

The agreement would also restrict logging below steep slopes to prevent sediment from reaching streams and implement other changes in the forest practices law.

The “private timber accord” was negotiated with help from Gov. Kate Brown’s office. It is anticipated to receive a “rubber stamp” from lawmakers in 2022.

“This is a legislative priority and has all the ingredients to pass,” said Cooper, adding that the Oregon Farm Bureau is still studying the proposal. “I have a hard time seeing a situation where it doesn’t go forward.”

Certain aspects of the accord, such as increased regulations for beaver removal in forests, have made the Farm Bureau nervous about the implications for agriculture.

“It could be a reason to adapt that policy to other lands,” said Lauren Smith, the group’s director of government affairs.

The Farm Bureau also plans to advocate for the resumption of a program under which private landowners pay an assessment to raise money for predator control by USDA’s Wildlife Services. The program was allowed to sunset during the previous legislative session after animal advocates opposed extending it.

“There doesn’t seem to be an avenue for our communities to manage predators,” Smith said.

There’s likely to be action on climate legislation, if Democratic lawmakers try to enshrine an emissions reduction plan from the state’s Department of Environmental Quality in law, Stone said.

“I expect there will be a bill to codify whatever the Climate Protection Plan rules say,” he said. “I’d be surprised if the majority did not try to push something through legislatively.”

County tax assessors sometimes differ in what they consider taxable real property, such as stationary equipment for greenhouses and seed cleaning, Stone said. The goal would be to make those rules uniform.

As for water supplies, a grant program created several years ago is largely focused on efficiency and hasn’t been used to develop water storage facilities, as intended, he said. “That needs to be taken down to the studs and rebuilt.”

In light of the politically charged atmosphere and the governor’s race, it’s likely that agriculture will have to fend off “just plain stupid” proposals intended to score points with certain voters, Stone said.

“2022 I would hope it would be boring, but I fear it may not be,” he said of the session. “I just don’t want anything truly harmful to get any oxygen during a short session.”

OLYMPIA — The Washington Legislature will convene Jan. 10 for a 60-day session that Gov. Jay Inslee says should be an ambitious one for ruling Democrats.

Over four days in December, Inslee rolled out his proposals for 2022. The agenda includes mandating riparian buffers along streams, phasing out natural gas use and subsidizing solar energy.

“The moment calls for boldness, and it calls for action that is at a scale commiserate with the challenges we face,” he said.

Democrats have firm majorities in the House and Senate. During 2021, they passed cap-and-trade, a low-carbon fuel standard and a new capital gains tax.

Tax collections are exceeding forecasts. Inslee has rebuffed a Republican invitation to use some of the unexpected revenue to cut taxes.

The governor cautioned “those who get stars in their eyes” and think the money will keep pouring into state coffers.

“The need for expenditures (is) going to go on, but the revenues are going to go away,” he said.

Even if the private-sector economy cools, the Inslee administration can look forward to new revenue sources.

The capital gains tax took effect Jan. 1. The state estimates it will collect $442 million when tax bills are due April 2023.

The Washington Farm Bureau and others are suing to overturn the tax. The suit remains in Douglas County Superior Court. The state Supreme Court ultimately will rule on the tax’s legality.

Also in 2023, manufacturers must start bidding for the right to emit greenhouse gases. The cap-and-trade auctions are expected to bring the state $220 million the first year.

Inslee did not propose raising taxes, but it’s possible the Legislature will consider raising the gas tax and other transportation-related fees.

For the “salmon crisis,” he proposes $187 million.

The salmon plan includes $8.4 million for the state Department of Fish and Wildlife to set and enforce “riparian-protection zones.”

Although the buffers would take land out of agricultural production, the governor’s office did not include farm groups in developing the proposal.

“We don’t do things that way in Washington — at least we didn’t use to,” said Jay Gordon, policy director for the Washington State Dairy Federation.

BOISE — Water storage and delivery infrastructure could get a large portion of Idaho’s $1.1 billion share of American Rescue Plan Act funds that the 2022 Legislature will allocate during the upcoming session.

Gov. Brad Little, a Republican rancher from Emmett, will open the three-month annual session with his State of the State and Budget Address on Jan. 10.

“The governor has made clear his goal is to use it for infrastructure — specifically water, sewer and broadband infrastructure,” said Alex Adams, the governor’s budget director.

The U.S. Treasury is yet to issue final rules for Rescue Plan Act funds.

Brian Patton, executive officer of the Idaho Water Resource Board, said a line item in the federal infrastructure bill President Joe Biden signed in November allows a state’s Rescue Plan Act money to be used as the non-federal match in a Reclamation project.

The board last summer prioritized 20 projects worth about $843 million. They include raising Reclamation-owned Anderson Ranch Dam and building a large aquifer-recharge project in the Upper Snake River Valley.

“We need to look at this ARPA money and the rules around it and see what we can do for water projects that are going to last the next 50, 60 years,” said House Agricultural Affairs Committee Chairman Clark Kauffman, R-Filer.

Lawmakers must also decide how to spend a state general fund surplus of $1.6 billion, driven by state sales and income tax revenue that is higher than expected.

“And so what we are looking at is how can we address some of our needs to have sustainable water supplies into the future, whether that be additional recharge, storage infrastructure like Anderson Ranch or even fixing or modernizing our existing delivery infrastructure,” he said.

Treasure Valley Water Users Association Executive Director Roger Batt said he expects infrastructure needs to be combined into a Water Resource Board appropriation. If an appropriation is approved, the board’s plan to spend it may include matching grants such as those found in the state’s flood-management program.

“As the population continues to grow, there will be additional pressures on water,” said Russ Hendricks of the Idaho Farm Bureau Federation. Increasing the capability to store and use water before it leaves the state would be beneficial in the long term, he said.

He said budget writers are identifying revenue sources “to not spend dollars that are one-time on ongoing needs.” In spending federal Rescue Plan Act funds this year, for example, “we want them to be identified for one-time capital projects.”

Little, in a June 3 memo to agency directors, said except for the public school budget, agencies should not exceed last year’s general fund appropriation by more than 3.1%.

Some agency requests will impact agriculture and forestry budgets.

Rob Sepich, budget and policy analyst for the Legislative Services Office, said the Department of Lands proposes to add full-time fire personnel and increase starting firefighters’ pay. The Department of Water Resources is also requesting additional staff for water-rights work such as adjudications.

The state Department of Agriculture wants to move employment at its invasive-species check stations from seasonal and temporary to full-time.

At its Center for Agriculture, Food and the Environment, the University of Idaho Agricultural Research & Extension Service seeks to hire an operations manager, a research support scientist and an extension 4-H educator focused on science, technology, engineering and math.

For the fiscal year that started July 1, the state general fund budget is about $4.22 billion. Tax collections through November were more than 13% ahead of forecasts, the Division of Financial Management reported.

The $11.2 billion overall budget, including federal funds, is 46.6% higher than a year earlier due to federal coronavirus aid, the Relief and Economic Security Act and ARPA funding, said Keith Bybee, the Legislative Services Office Budget and Policy Division manager.