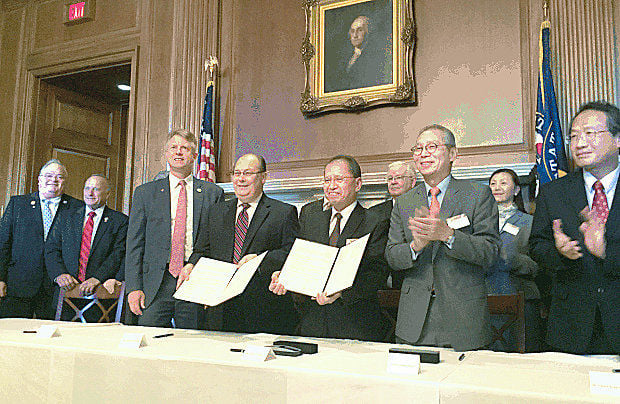 Members of a group representing Taiwanese millers sign a letter of intent to purchase U.S. wheat for two more years on Sept. 13 in Washington, D.C. They were also scheduled to travel to Idaho to sign an agreement. 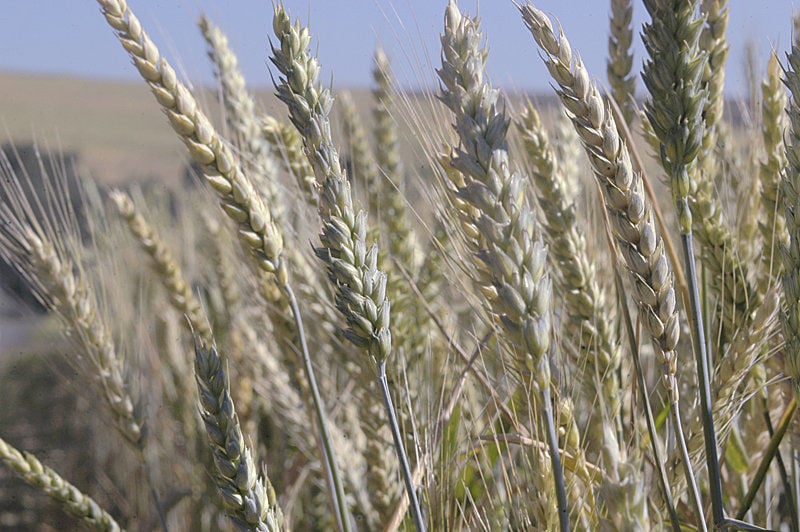 Members of a group representing Taiwanese millers sign a letter of intent to purchase U.S. wheat for two more years on Sept. 13 in Washington, D.C. They were also scheduled to travel to Idaho to sign an agreement.

BOISE — Representatives of the fourth largest importer of Idaho wheat are scheduled to sign a pledge Sept. 20 at the Idaho Capitol to continue their grain purchases for two more years.

During the 11 a.m. ceremony, which Gov. Butch Otter said he plans to attend, officials with the Taiwan Flour Millers Association will sign a letter agreeing to buy 1.8 million metric tons of U.S. wheat in 2018 and 2019 combined.

The Taiwanese group, which arrived in the U.S. Sept. 12 for an eight-day visit, signed the same pledge in Washington, D.C., on Sept. 13 and also visited Montana and North Dakota. The letter of intent is symbolic and is renewed by the Taiwanese millers every two years, based on their projected grain demand. This marks the 11th time leaders with the association, which represents all 20 of Taiwan’s millers, have signed a pledge to buy U.S. wheat.

“This is an opportunity for our groups to come together to thank each other for being a customer and a supplier of wheat and to continue to grow our relationship,” said Tereasa Waterman, the Idaho Wheat Commission’s information and education manager. “Idaho is a good friend to Taiwan. We appreciate them coming and we always roll out the red carpet.”

During their time in the Gem State, the Taiwanese representatives will tour an artisan bakery in Boise and meet with Idaho wheat growers at a dinner hosted on Kuna grower Richard Durant’s farm.

Waterman said about 47 percent of Idaho’s wheat is exported, and the Taiwanese buy roughly $470 million in Idaho wheat annually. She said Taiwan buys a lot of hard red wheat from Idaho, but they’re most interested in the state’s soft white wheat, which they use in products such as cookies, crackers, bunch cakes and noodles.

Mark Fowler, vice president of overseas operations with U.S. Wheat Associates, said Taiwan buys most of its wheat from the Pacific Northwest, which has a freight advantage over other U.S. regions. Fowler said Taiwan is the eighth largest importer of U.S. wheat, averaging about 38 million bushels per year in purchases, and its demand has grown by about 1.5 percent per year.

Fowler said Taiwan is unique among Asian markets in that its population now consumes more wheat than rice. His organization has had an office in Taiwan for more than 50 years and invests heavily in market development, training and educational programs in the country. U.S. Wheat Associates invests about $350,000 per year in developing the Taiwan market, coming from both USDA and internal funds.

Fowler, a milling expert who has facilitated past training sessions in Taiwan, said his organization will emphasize food safety and the high quality of U.S. wheat in its upcoming trainings in Taiwan.

Researchers to study impacts of wildfire smoke on hemp