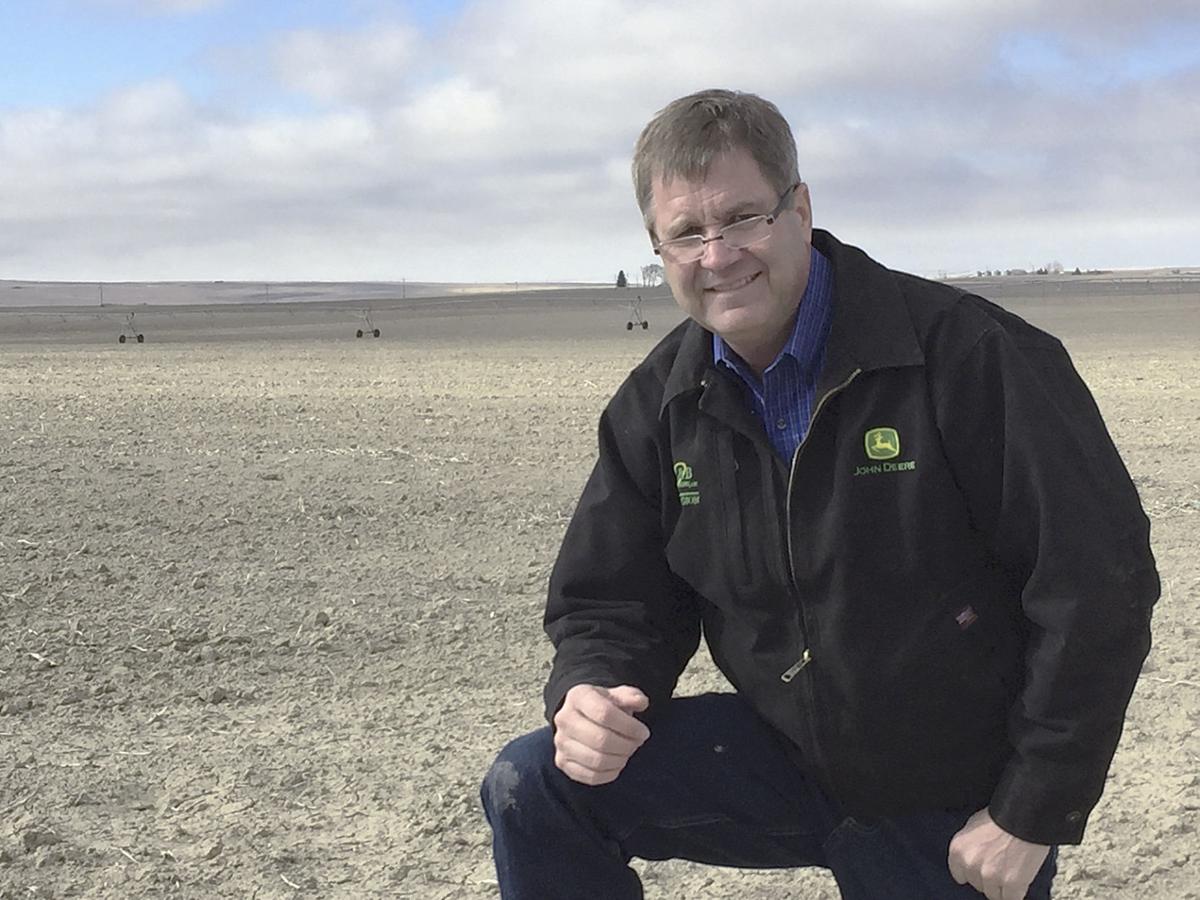 Mark Mickelsen discusses potato production in a field at his Roberts, Idaho, farm. He is among the group petitioning for more representation for Eastern Idaho growers on the Idaho Potato Commission. 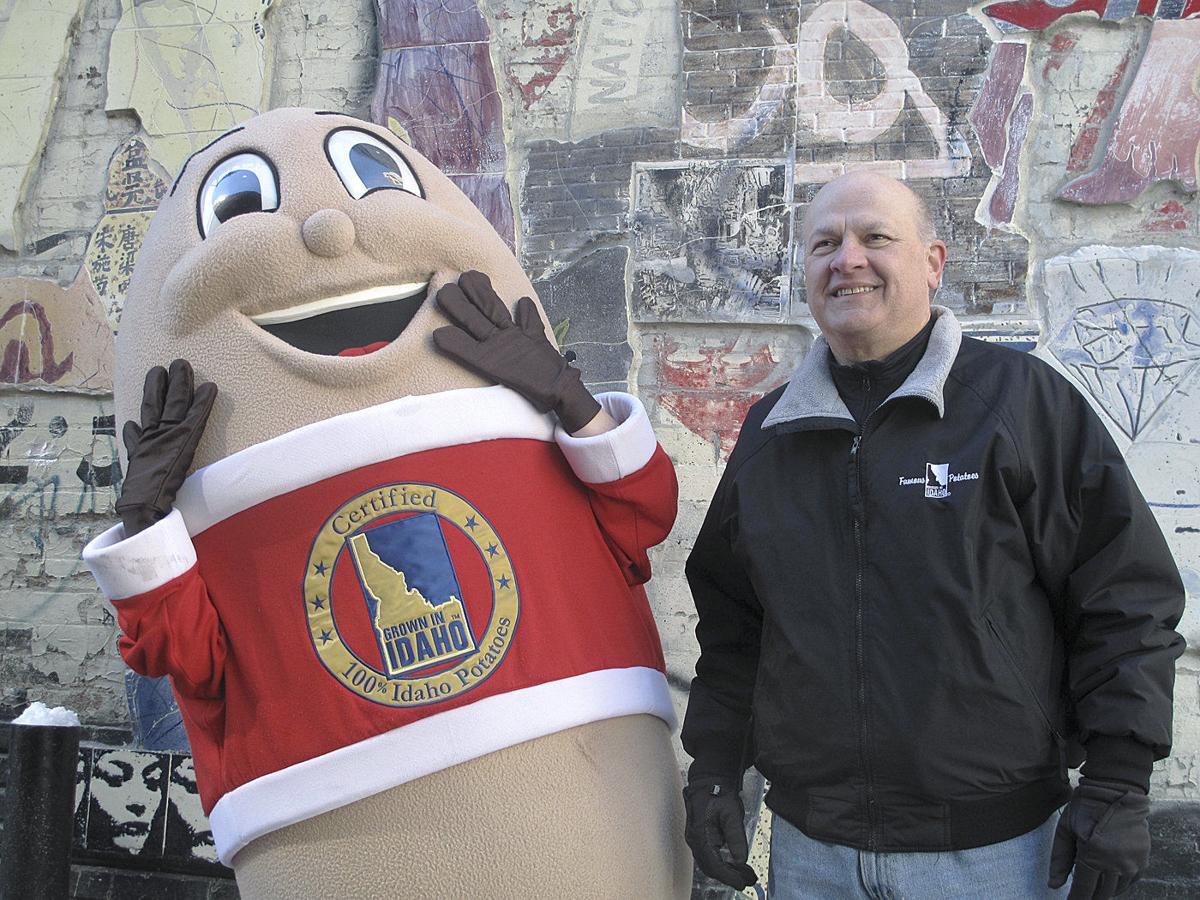 Idaho Potato Commission President and CEO Frank Muir and the commission's mascot, Spuddy Buddy, are shown Feb. 23 in Boise while shooting a social media video to promote Idaho potatoes. A grower petition is seeking to change the makeup of the IPC's nine-member board and how its members are selected. 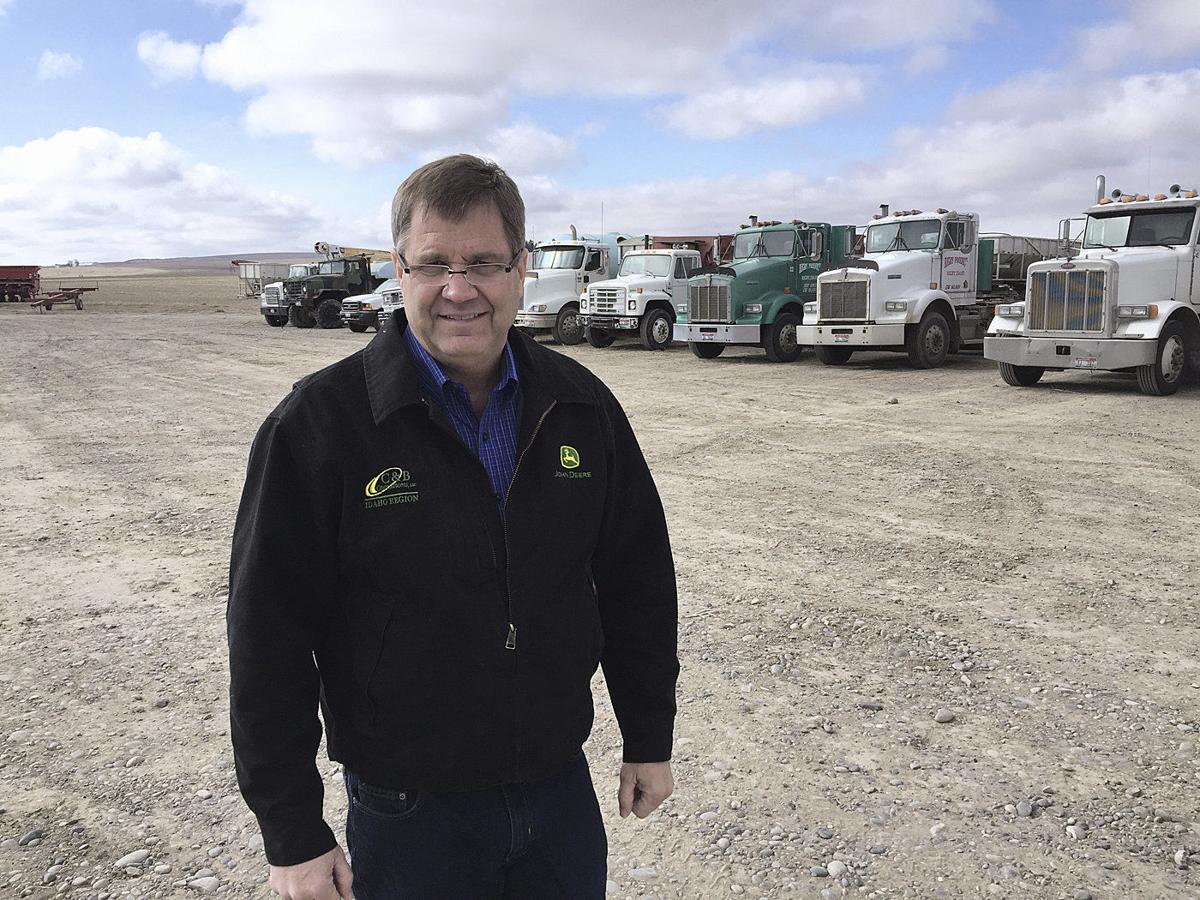 Mark Mickelsen with his fleet of potato trucks at his Roberts, Idaho, farm. He is among the group petitioning for more representation for Eastern Idaho growers on the Idaho Potato Commission. 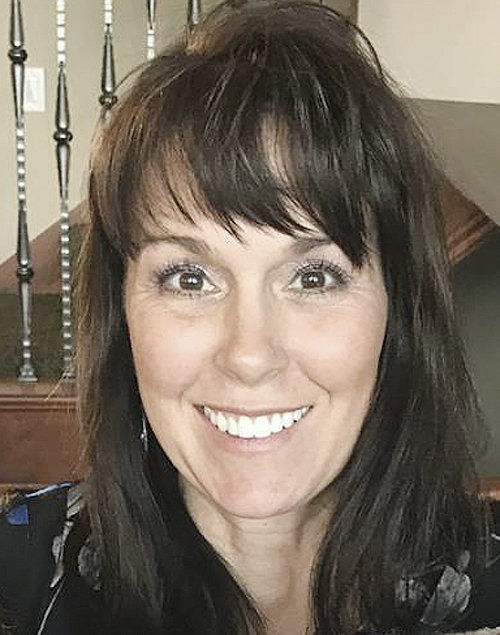 Mark Mickelsen discusses potato production in a field at his Roberts, Idaho, farm. He is among the group petitioning for more representation for Eastern Idaho growers on the Idaho Potato Commission.

Idaho Potato Commission President and CEO Frank Muir and the commission's mascot, Spuddy Buddy, are shown Feb. 23 in Boise while shooting a social media video to promote Idaho potatoes. A grower petition is seeking to change the makeup of the IPC's nine-member board and how its members are selected.

Mark Mickelsen with his fleet of potato trucks at his Roberts, Idaho, farm. He is among the group petitioning for more representation for Eastern Idaho growers on the Idaho Potato Commission.

BOISE — Some Eastern Idaho potato growers are petitioning for a bigger voice in the Idaho Potato Commission and how its nine members are chosen.

The commissioners are responsible for overseeing the IPC and its $15 million budget, which is funded through a grower assessment of 12.5 cents per every 100 pounds of potatoes Idaho farmers grow.

Supporters of the proposal to alter the commission believe that since the governor has the final say on who serves on it, the IPC doesn’t necessarily always represent how the state’s potato growers feel on certain issues.

They also question whether potato farmers are getting the most bang for their buck from the potato assessment.

“We want to connect the commission back to the growers who are paying the tax,” said Stephanie Mickelsen, a potato grower near Idaho Falls. “If you ask potato farmers who their commissioners are, most of them can’t tell you.”

The Mickelsen family farm crafted the proposal. They presented its highlights to members of the House Agricultural Affairs Committee Feb. 12.

They said the petition is supported by 25 farmers who represent about 100,000 of the roughly 320,000 acres of potatoes grown each year in Idaho, which is the national leader in spud production.

Immediately before that presentation, IPC President and CEO Frank Muir presented the committee with highlights showing how the commission has benefited the Idaho potato industry since he was hired in July 2003.

From 2004 to 2016, potato revenue in Idaho has averaged $867 million annually, which has meant an additional $2.9 billion in added value for potato farmers, Muir said.

In the most recent six years, Idaho potato revenue has averaged $980 million.

Muir said the “most important measurement of the impact the IPC has had the past 14 years is the bottom line, which for the potato industry is farm gate revenue.”

Idaho’s 600 potato farmers produce 13 billion pounds of spuds per year and “the IPC has been instrumental in moving that pile to consumers every year during the past 14 years,” he said.

Muir said that 14 years ago, potatoes were targeted by a barrage of low-carbohydrate diets and even under attack in Idaho.

The state’s then-governor, Dirk Kempthorne, announced he was going on the Atkins low-carb diet, which frowned on potatoes, and a bill introduced in the state legislature sought to remove “Famous Potatoes” from Idaho’s license plates.

Now, Idaho’s only college football bowl game is sponsored by the IPC and 30,000 people crowd into downtown Boise each year to watch as a large, lighted potato is lowered to ring in the new year, Muir said.

On the national front, the commission fought back against the low-carb diet fad and hired fitness icon Denise Austin to promote the nutritional benefits of Idaho potatoes.

With support from the industry, the IPC’s potato assessment was increased, which allowed the commission to begin advertising nationally for the first time. The commission also began educating potato shippers on how to market fresh potatoes around the globe, which had never been done before, Muir said.

As a result of the commission’s many marketing efforts, including its Big Idaho Potato Truck promotion, “The Idaho potato is now cool with millennials and even younger generations,” he said.

Following Muir’s presentation, supporters of the proposal to change the makeup of the commission presented data showing that grower returns for Idaho potato farmers are lower than those in other potato producing states.

They also pointed out that Idaho’s potato assessment is higher than the assessment in all other potato producing states.

For example, Washington, the nation’s second-largest potato-producing state behind Idaho, has an assessment of 4 cents per cwt., Wisconsin’s assessment will be 8 cents effective in July, Colorado’s assessment is 7 cents, Maine’s is 6 percent and Oregon’s is 5 cents.

Muir said it shouldn’t be surprising that Idaho’s potato assessment is higher than other states.

“Americans don’t even know other states even grow potatoes,” he said.

If Idaho growers want to vote to reduce their potato assessment to be more in line with other states, he said, “then they have to be prepared to dramatically reduce their acres they grow to be more in line with those same states, because you aren’t going to be the nation’s leader without keeping your pedal to the metal in marketing your potatoes.”

But, he added, “the reason we shared that information is to show that perhaps our commission may not be performing to the standards that we desire. If the commission can’t help us, then perhaps the assessment should be less.”

Muir told Capital Press that the state’s lower grower returns have to do with the fact that Idaho ships potatoes throughout the nation and faces higher transportation costs.

“Last year, we shipped 38 million hundredweight of potatoes, which is a record for the state of Idaho,” he said. “People are eating more Idaho potatoes than ever before and that is what the commission is responsible for and charged to do: increase demand. It’s not our role to set the prices. We can’t affect prices directly.”

Since the Feb. 12 House ag committee meeting, specifics of the proposal have changed somewhat based on input from industry members, Stephanie Mickelsen said.

Changing the makeup of the commission and how commissioners are chosen would allow growers to have a more direct say in the assessment and how the commission operates, she said.

Currently, growers, shippers and processors present three names to the governor and the governor chooses one.

“Government closest to the people does the best job. It would be the same principle with the potato commission,” said Stephanie Mickelsen.

“We don’t really have any say over who is on our commission,” he said. “We just don’t feel that’s right.”

The proposal also calls for better grower representation on the commission based on where potatoes are grown.

Grower seats are now divided into four districts, with District 1 in East Idaho, where 70 percent of the state’s spuds are produced, having two seats and each other district having one.

District 3, which includes southwestern Idaho, has one seat despite growing only 3 percent of the state’s potatoes.

The commission districts are currently disproportionate to where potatoes are actually grown, petition supporters say.

The grower petition would create seven grower districts that each represent about 14 percent of Idaho’s potato production.

The petition also calls for referendums and “periodic reviews of assessments by the growers that are paying the assessment.”

Doug Evans, a Blackfoot potato grower, supports the call for a change in the commission “but exactly how that change should happen, I’m not sure yet,” he said.

The state statute that governs the commission hasn’t been changed in almost five decades.

“If I were still growing potatoes the same way I was (50) years ago, I would definitely be out of business,” Evans said. “I would support a petition to take a look at the commission and whether it’s benefiting growers in the best possible way.”

Some House ag committee members said the proposal includes some interesting things to consider but they didn’t commit to supporting any changes.

Rep. Ryan Kerby, R-New Plymouth, said it would take a long debate on the issue before he was prepared to make any change. But, he added, “It’s pretty interesting.”

Rep. Judy Boyle, R-Midvale, the House ag committee chairwoman, said the committee doesn’t plan on getting in the middle of the issue and urged both sides to work together to modernize the IPC statute if changes are needed.

“Don’t come to us and ask us to choose between one or the other,” she said.

If the two sides do agree on any changes, the Idaho Legislature would have to approve them.

IPC commissioners said they are open to considering what petition supporters have to say.

Commissioner Nick Blanksma, a processing potato grower from Hammett, said the first time he heard about the proposal was during the committee meeting.

There’s a lot in the proposal to sift through, he said, “But I would be glad to look at it. They are potato growers in Idaho and we need to be open to what anybody in the industry is concerned about. We need to listen to them and that’s what we’ll do.”

Muir said the IPC always welcomes input from industry on “how the commission can better represent the needs of its growers, shippers and processors.”

He said a discussion will be held during an upcoming industry-wide meeting regarding many topics, including the current commissioner grower districts.