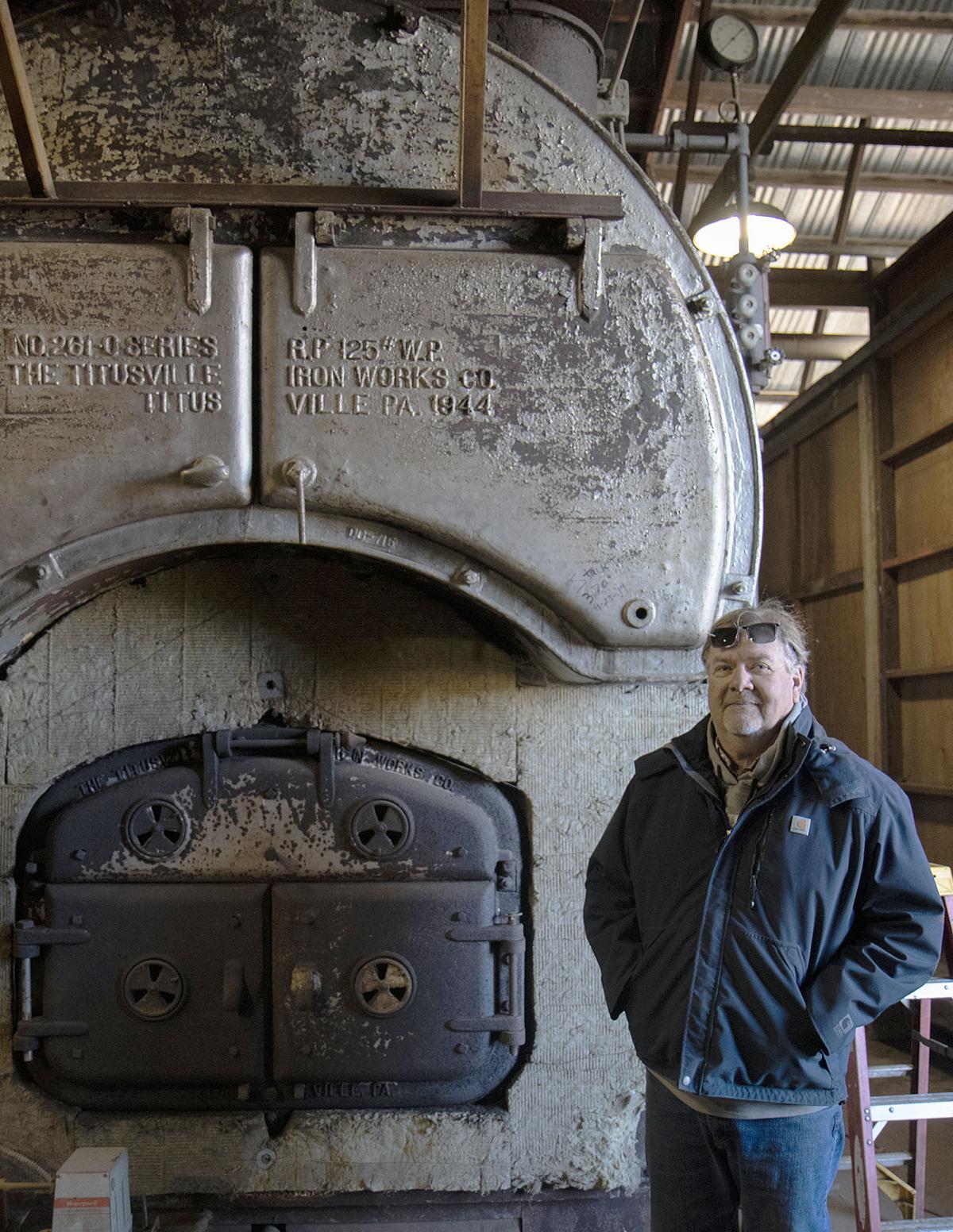 Oregon mint grower John Reerslev stands in his distillery beside a boiler, built in 1944, which he still uses. 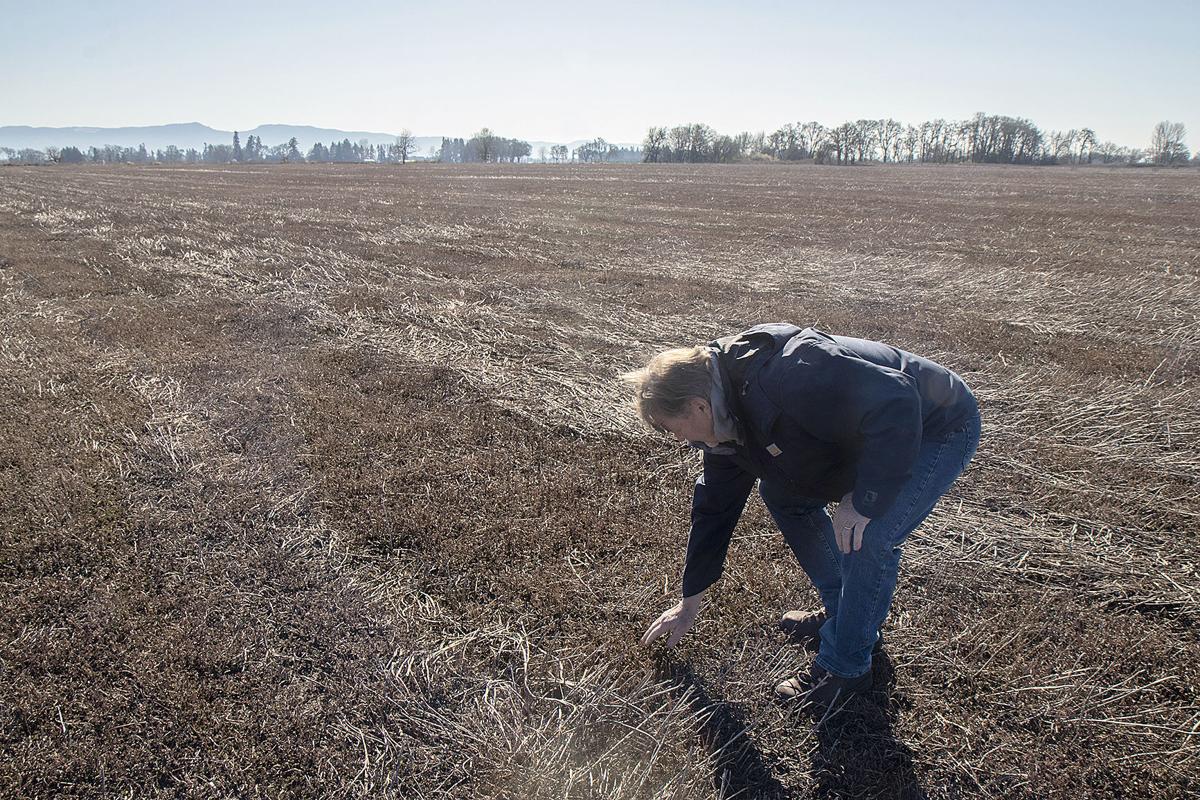 John Reerslev, a second-generation mint grower in Junction City, Ore., plucks a sprig of young mint from a dormant field in March. 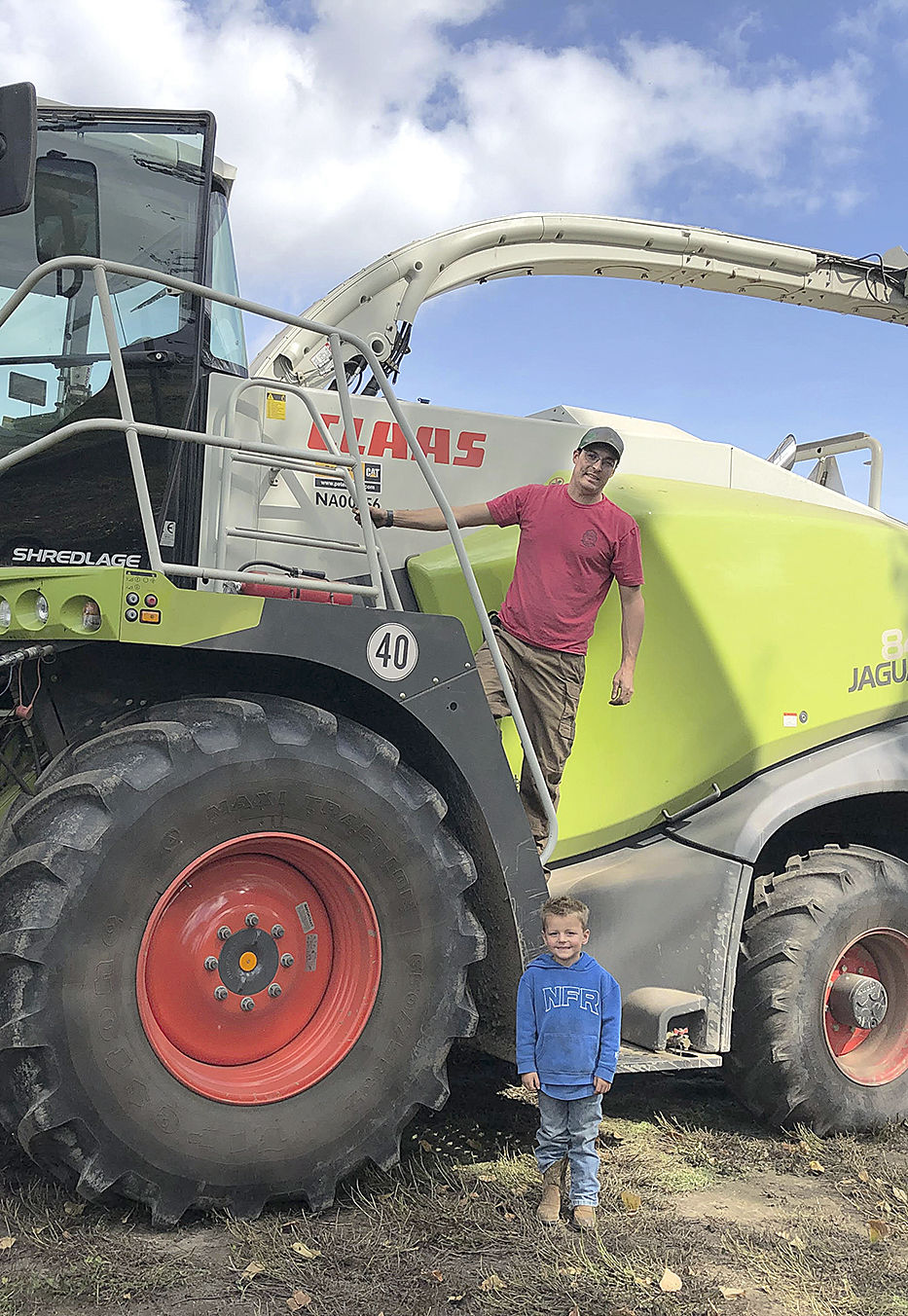 Scott Setniker, a mint grower in Independence, Ore., with his son, Hesston Setniker. 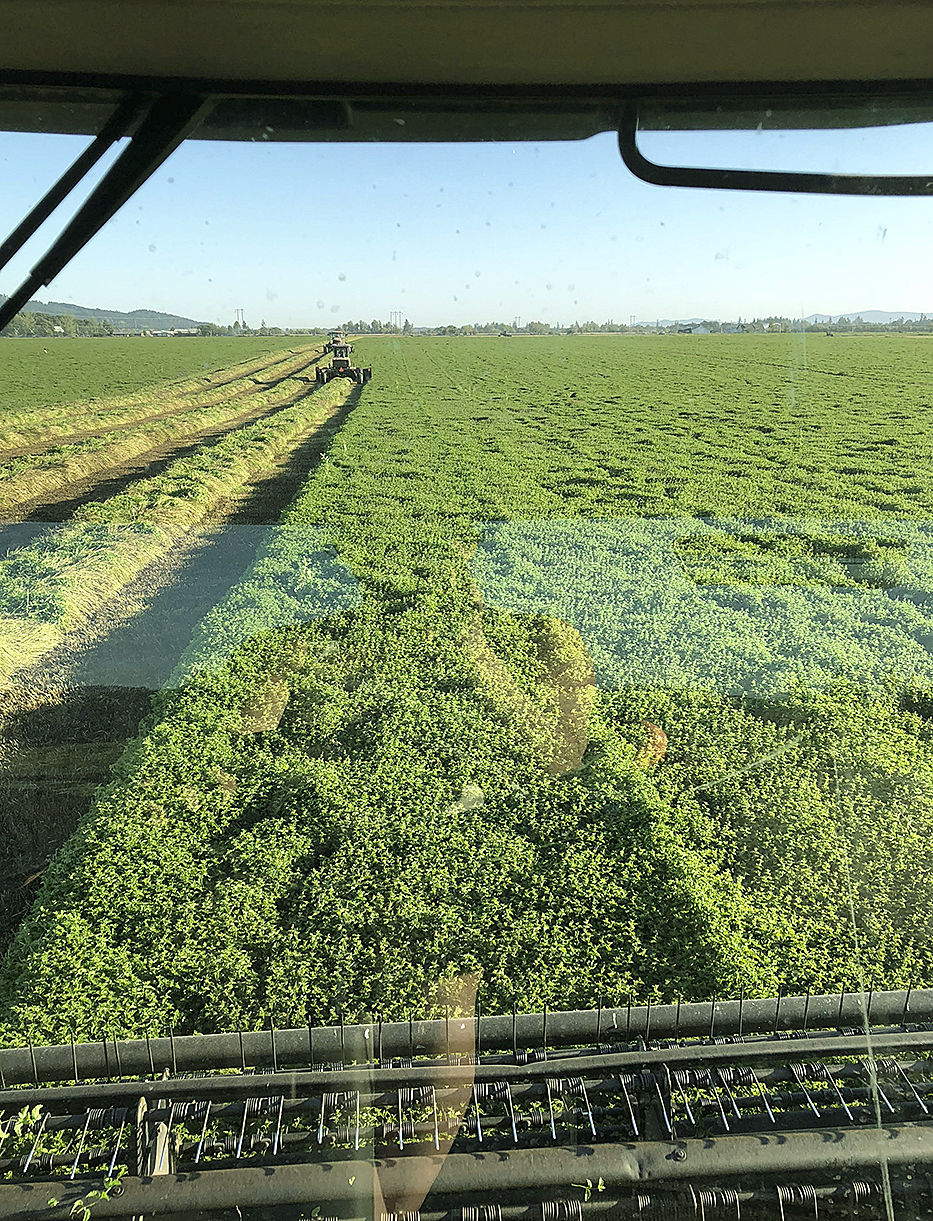 A view of the harvest from inside a harvester. 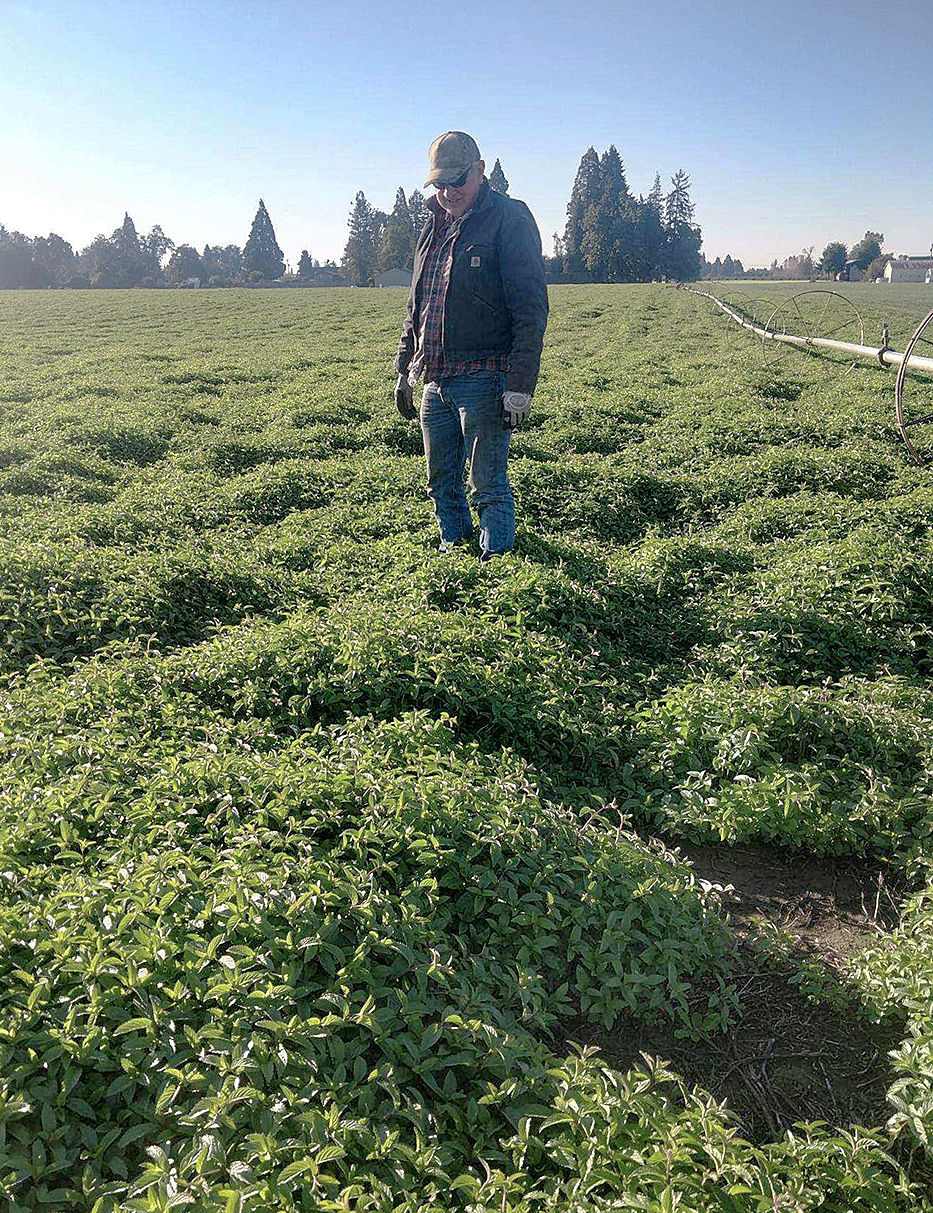 David Reerslev, a grower in Junction City, Ore., stands in a field of mint. 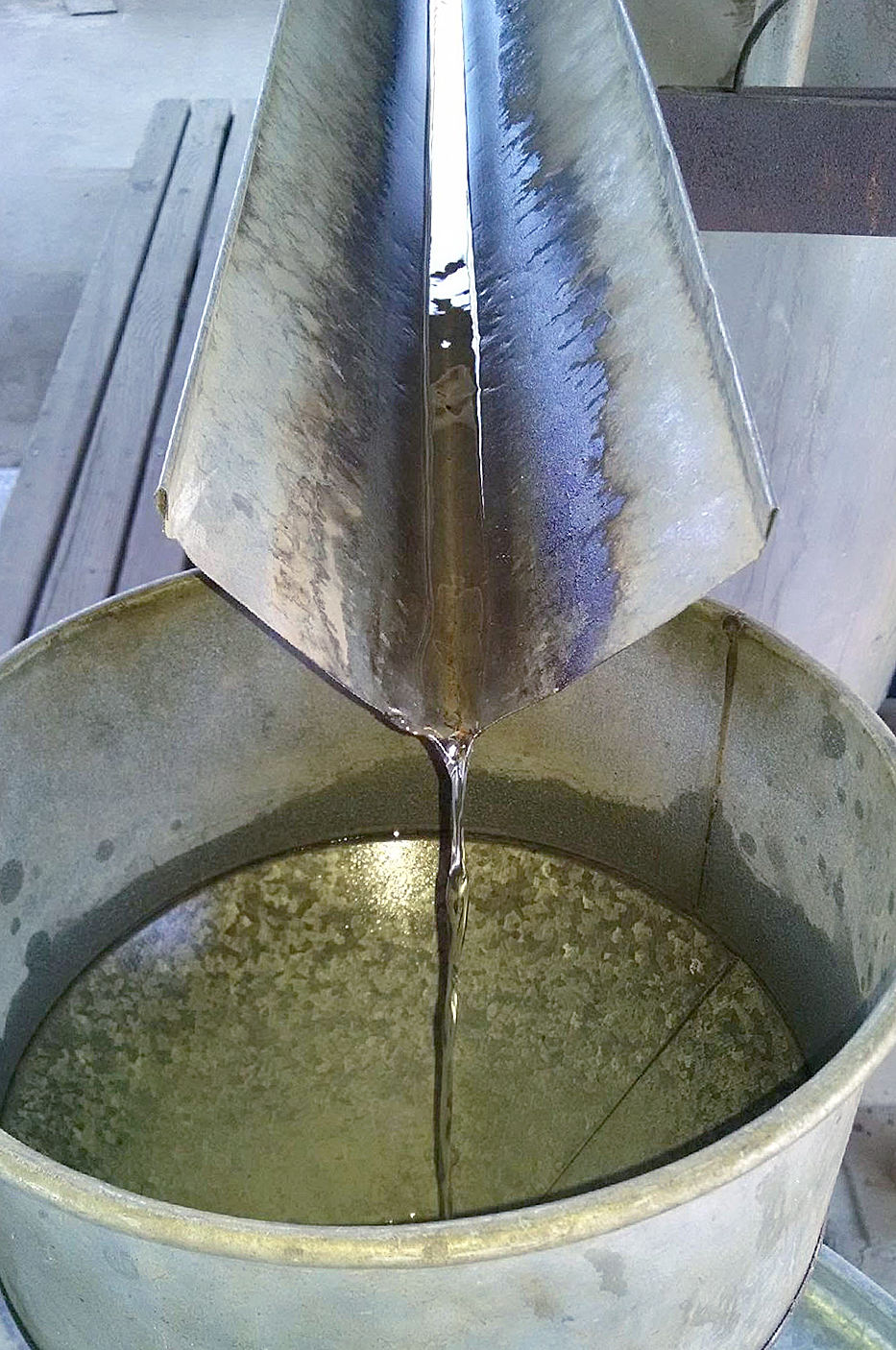 Mint oil during the distillation process. 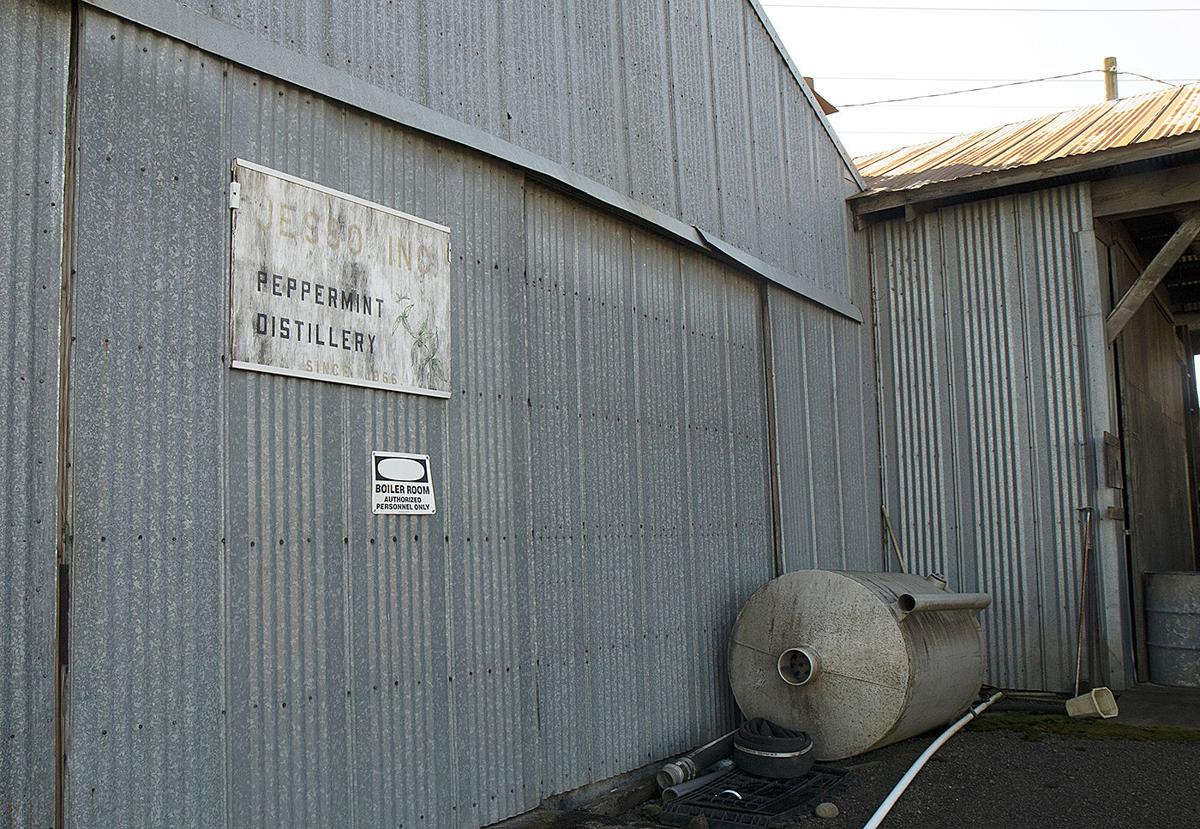 The Reerslevs run one of the three remaining mint distilleries in Oregon’s Willamette Valley.

Oregon mint grower John Reerslev stands in his distillery beside a boiler, built in 1944, which he still uses.

John Reerslev, a second-generation mint grower in Junction City, Ore., plucks a sprig of young mint from a dormant field in March.

Scott Setniker, a mint grower in Independence, Ore., with his son, Hesston Setniker.

A view of the harvest from inside a harvester.

David Reerslev, a grower in Junction City, Ore., stands in a field of mint.

Mint oil during the distillation process.

The Reerslevs run one of the three remaining mint distilleries in Oregon’s Willamette Valley.

JUNCTION CITY, Ore. — John Reerslev, 65, a second-generation mint farmer, bent and plucked a young mint sprig from the soil. He rubbed it between leathery fingertips and held it to his nose. A breeze rippled his graying hair.

“When harvest comes, everything smells like peppermint,” he said. “It fills the air.”

Reerslev and his family grow mint and distill mint oil in the Willamette Valley, heartland of America’s mint industry.

The Reerslevs run one of just three remaining mint distilleries in the valley in a time when, despite continued consumer demand for mint, Northwest growers grapple with deadly fungi and foreign competition.

“Mint is a really interesting specialty crop to grow,” said Reerslev. “But it’s not easy. You've got to have a sense of humor to grow mint."

The farm is scaling back its operation, said Reerslev, in the face of industry challenges.

When the Reerslevs built their distillery in 1966, they did it alongside two other farms — which are no longer growing mint.

Although Oregon now has fewer distilleries, the Northwest mint industry continues strong. Acreage isn’t disappearing; it’s just shifting locations from Oregon to Idaho and Washington, where the cost of production is often lower.

According to Bryan Ostlund, executive director of the Oregon Mint Commission and administrator of the Mint Industry Research Council (MIRC), the Willamette Valley alone produces some 10,000 acres of mint.

Statewide, he said, Oregon has about 50 growers and will plant about 18,000 acres of mint this year, resulting in 2 million pounds of mint oil — enough to give every person on earth 13 sticks of mint-flavored chewing gum.

Some Oregon growers told the Capital Press they’ve cut back mint acreage by as much as 20% in the past year.

Together, Ostlund estimates, the three states constitute 80% of the domestic industry.

One of the reasons mint acreage is simultaneously shrinking in Oregon but expanding elsewhere is Idaho and Washington, relatively new to the industry, have more “virgin soils” available that aren’t contaminated by verticillium wilt, mint’s arch nemesis.

According to Kelly Vining, horticulturalist and mint researcher at Oregon State University, verticillium wilt, caused by the fungus verticillium dahlia, causes wilting and death in mint.

Once a field is infected, it stays that way. Mint is a perennial plant typically grown in four-year rotations. Many other crops, such as strawberries and potatoes, are not themselves hurt by this strain of wilt but can act as hosts to keep it alive in the soil. Even if farmers rotate crops hoping to choke out the fungus before the next mint crop, their efforts are often in vain.

The Reerslevs primarily grow Mentha xpiperita, or peppermint, a sterile plant propagated through root rather than seed. For each new mint crop, David Reerslev said, the family buys “clean,” or fungus-free, root stock from virgin soils in Burns, Ore.

“But we plant the clean roots in our wilty soil, and they get contaminated,” said David Reerslev.

“We like to call the fresh root stock ‘baby mint,’” added John Reerslev, casting a knowing smile at his brother. “But it’s not baby mint anymore; it’s maybe mint.”

To combat the fungus, some growers propagate their own root stock, such as Scott Setniker, a third-generation farmer in Independence, Ore.

The fungus was introduced to Northwest soils through early farming practices when settlers crossed the continent, according to the Mint Industry Research Council.

North America’s mint industry started on the East Coast, said Ostlund, where there was a natural pathogen.

“Settlers kept looking for fresh ground,” he said, “and it progressed from east to Midwest and ultimately out to the Far West.”

Some mint varieties, such as spearmint, are relatively resistant to wilt. But to limit oversupply, in 2018, the USDA created a rule to limit who can grow spearmint and in what quantity.

Spearmint and peppermint are actually very different. Because of its 40% menthol content, peppermint has a pungent smell and a cooling, refreshing taste — popularly found in toothpastes and holiday treats.

Spearmint, in contrast, contains only 0.5% menthol, resulting in a delicate scent and sweet, herbal flavors. It is often used in savory recipes such as Mediterranean lamb dishes. The demand — and, therefore, the acreage — for peppermint is far greater.

Race to the future

Growers across the Northwest, frustrated by the disease that ails their peppermint plants, say they’re excited about ongoing research to develop wilt-resistant varieties.

Vining, the OSU horticulturalist, studies genomics, or genetic mapping, of mint, and is working to identify genes and markers for wilt resistance. Vining uses traditional plant breeding techniques rather than genetic engineering.

But she and other researchers have not yet developed a variety suitable for the market, because the relatively wilt-resistant plants so far produce low yields, poor oil and the wrong scent.

“It will take a lot of crosses,” said Vining. “We’ll just slog through until we get it right. We’re not quite there yet, but we’re getting closer to field trials, and I hope soon we’ll have something marketable.”

Mint growers, Vining said, have offered to be part of future field trials.

More than 25 species of mint are grown throughout the world for many purposes.

The ancient Egyptians used the herb as a remedy for indigestion, and dried peppermint leaves have been found in pyramids dating to 1,000 B.C., according to the Museum of Egyptian Antiquities in Cairo.

In Greek mythology, a beautiful nymph, Minthe, angered Persephone, the goddess of vegetation, who turned Minthe into a plant — from which we get the later Latin word “mentha” and the English “mint.”

The Bible records that the Pharisees paid a tenth of their mint as a tithe.

Mint appears in classic literature and plays, ranging from Chaucer to Shakespeare.

And in the Middle Ages, people used powdered mint leaves to whiten their teeth: a tradition that has continued.

Today, according to the industry’s Research Council, 45% of mint oil is used to flavor toothpaste, mouthwash and other oral hygiene products.

Mint was, and is, global.

And so is the competition.

“It’s the Walmart effect,” said Ostlund of the MIRC, “globalization.”

“The Willamette Valley produces the highest quality mint anywhere,” said Ostlund. “But if you can’t compete price-wise, it’s all for naught.”

The harvesting and distilling processes for mint are complex and expensive.

“Mint harvest is like a mini-business in itself,” said John Reerslev.

John and his wife, Karla, have a biological son, a daughter adopted from India and five adopted from Ethiopia. When harvest time came through the years, it was “all hands on deck” — with John’s brothers David and Kenny, John’s nephews, Karla and the kids and an assortment of locals — working together, in shifts, 24 hours a day, for three weeks.

Even with a smaller operation this year, the harvesting and distilling process will still be intense and costly.

Mint growers say they work at the front of a long distribution chain: including farm laborers, drivers, dealer-handlers (there are only six in the U.S.), flavoring house specialists in lab coats examining the oils, product manufacturers, retailers and at last, consumers.

And according to Ostlund, professional flavorists are perfecting the skill of blending oils — using a cheaper Indian mint base with just enough Northwest-grown mint to create, for example, a “Willamette flavor profile,” mimicking the valley’s high-quality oil at a lower cost.

Experts say it remains to be seen whether brands move away from reliance on domestic growers, or young consumers push for more “local” and “natural” mint as they have done with other products.

Some brands have managed to maintain relationships with local farmers in the face of international industry shifts. Setniker, the mint grower, estimates Colgate-Palmolive still sources more than 60% of its mint from the Willamette Valley.

“I and my son are in a video Colgate made,” he said. “And you can even find a picture of us with Colgate toothpaste on Amazon. Our little moments of fame.”

Vining of OSU said there have always been “booms and busts” in the mint industry. In recent years, she said, between international competition, fungal challenges and new crop trends — like displacing mint fields with long-term hazelnut orchards — domestic mint has been pushed out of the limelight.

“But it may make a comeback,” she said. “We’ll see what happens with the research. And regardless, there will always be a niche for Northwest mint, especially Willamette Valley mint. It’s grown on family farms. And it’s an important regional tradition.”

Morning sunlight spilled into John Reerslev’s distillery, creating a kaleidoscope of golden blocks and deep shadows on the floor. He stood beside the great iron boiler built in 1944. The room smelled of peppermint.

“The baby mint are just poking out now,” said Reerslev. “And then we’ll harvest around the first of August. I was 12 when my father started raising mint. And here we are, another year.”