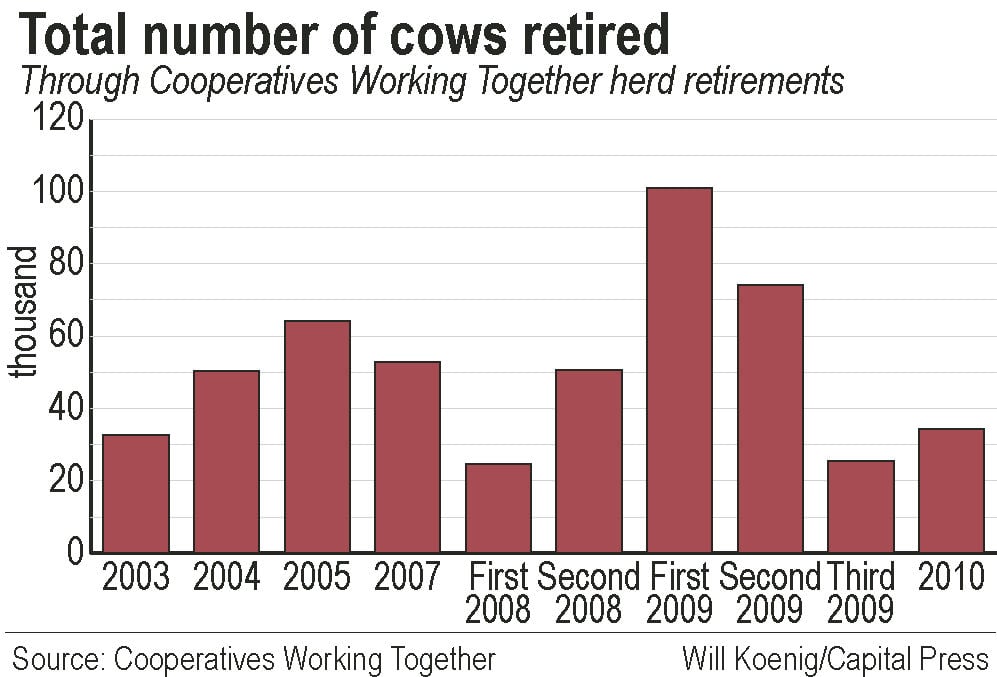 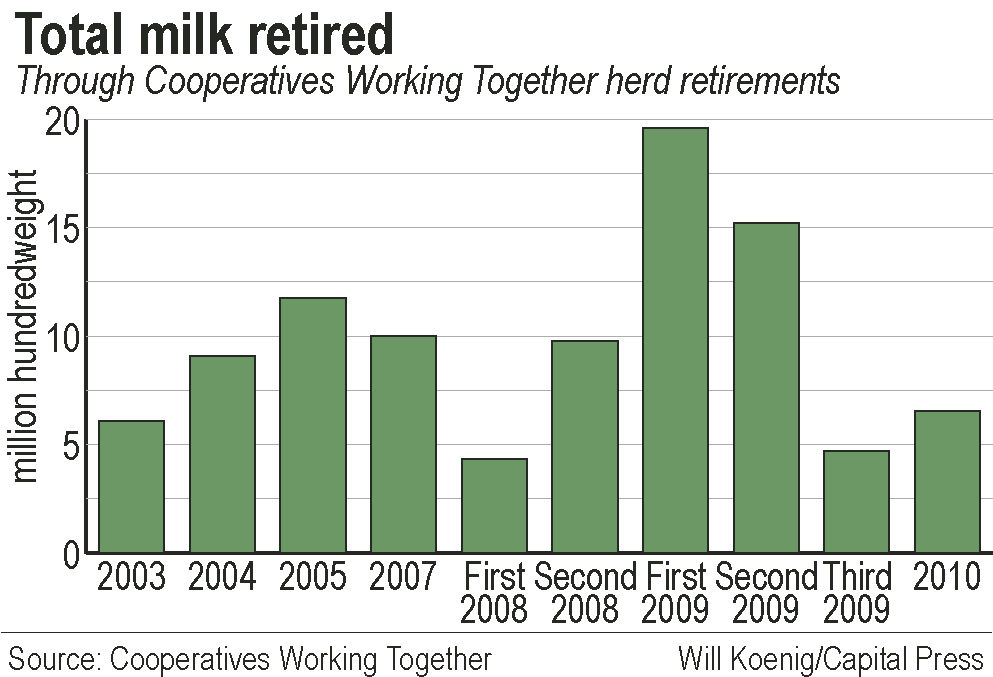 More dairies in the Midwest have taken buyouts in the Cooperatives Working Together herd retirements, but more cows and more milk are removed from dairies in the West.

CWT is working now on farm audits for its 10th herd retirement since 2003, aiming to remove 34,442 cows from the national herd and about 654 million pounds of milk from the market.

"For the smaller operations to the east, it's a situation of age and health, a factor of producers utilizing (CWT) as a way of leaving the business," said Jim Tillison, CWT chief operating officer.

In the West, it's a combination of age and financial well-being, he said.

"It's an indication financial stress had more to do with the decision," he said.

At first blush, it might seem larger dairies in the West would have a lower cost of production, but that's not necessarily so, Tillison said.

"In terms of cost of production, a major factor that's not always considered is debt load," he said. "Dairies in the East tend to be older operations, more established and carrying less debt load than those in the West."

"The conventional wisdom is farms in the West were more highly leveraged. Guys in other parts of the country with more equity could hold out longer," he said.

One difference is that producers in the West buy feed, while those in the Midwest grow their own, he said.

"With our cost structure, margins are lower or non-existent. Dairymen just had to decide," said Jamie Bledsoe, president of Western United Dairymen and a Riverdale, Calif., dairyman. "And larger dairies didn't have MILC to prop us up."

"Our markets react much quicker, 60 days ahead of the rest of the country, to feel the hurt," he said.

Some of those takers in the West might have opted to restructure and get back in the business at a later date, Tillison said.

CWT is an option for farmers to exit the business without losing everything, said Don Blayney, an ag economist with USDA Economic Research Service. It could also give farmers a way to step back and take a breath for a year and re-evaluate their situation.

Herd retirements are not reducing the aggregate milk supply. July milk production in the major producing states was up 15.3 billion pounds, 3 percent, from July 2009.

Removing 3.9 billion pounds of milk from the pipeline in the three retirements in 2009 helped raise the milk price $4 per hundredweight.

That created a situation where producers are more comfortable with the margin to produce more milk, Tillison said.

More milk is the result of producers being more optimistic. It's also being driven by a significant increase in per-cow production and not by an increase in cow numbers, he said.

The CWT committee is planning to continue herd retirements going forward, but also wants to look at other tools, such as its export assistance program, to build markets rather than using herd retirements to make temporary adjustments, he said.

The goal is to get off the cyclical treadmill that has arisen where prices rebound with herd retirements then fall again with more production, he added.