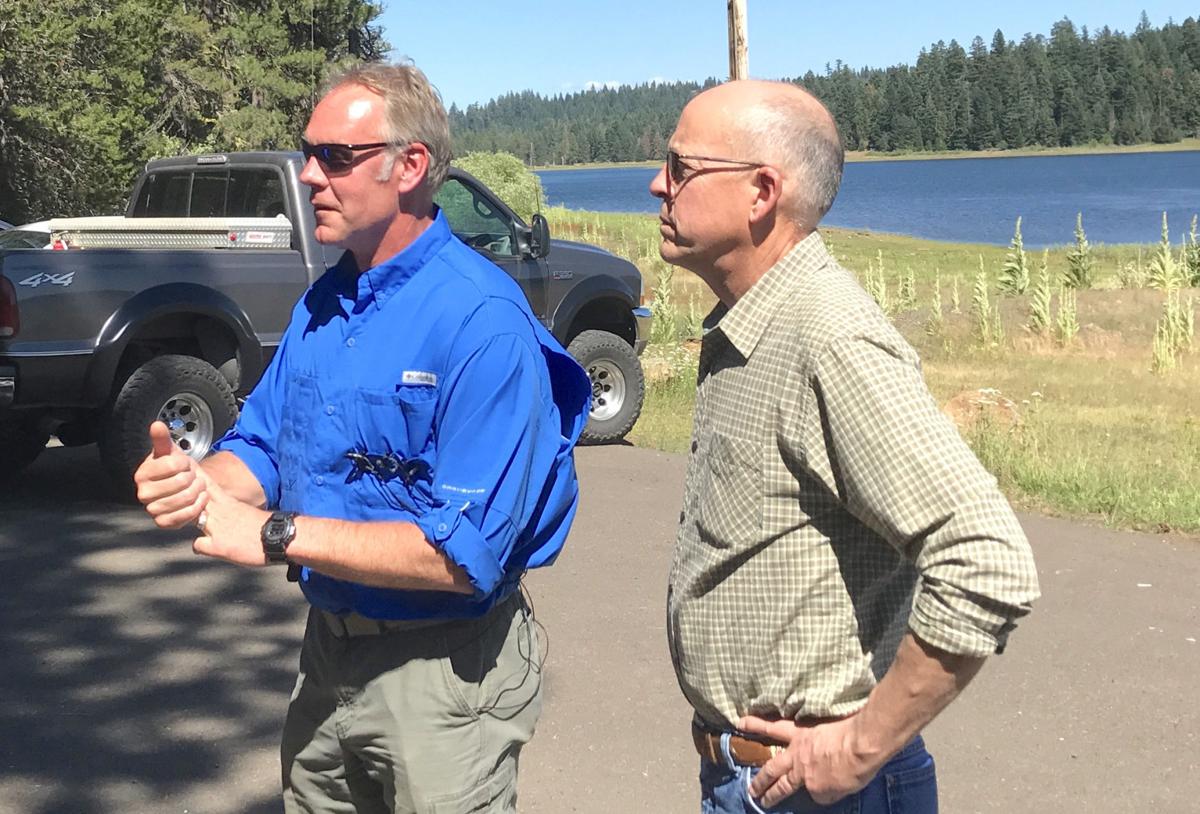 Interior Secretary Ryan Zinke, left, and Rep. Greg Walden, R-Ore., speak about the borders of the Cascade-Siskiyou National Monument at Hyatt Lake in this July 15, 2017, file photo. Zinke told the Associated Press he quit President Donald Trump's cabinet on his own terms, despite indications he was pressured by the White House to resign effective Jan. 2. 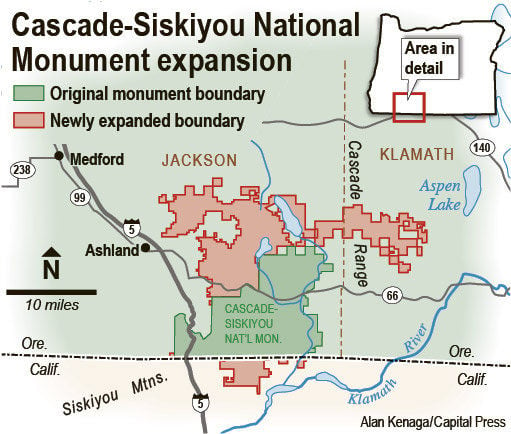 Interior Secretary Ryan Zinke, left, and Rep. Greg Walden, R-Ore., speak about the borders of the Cascade-Siskiyou National Monument at Hyatt Lake in this July 15, 2017, file photo. Zinke told the Associated Press he quit President Donald Trump's cabinet on his own terms, despite indications he was pressured by the White House to resign effective Jan. 2.

The original 53,000-acre monument was created in 2000 but was increased to roughly 100,000 acres by the Obama administration last year.

It’s now one of 27 national monuments created in the last two decades that are under review by the Trump administration.

Zinke’s recommendation for potential changes to the Cascade Siskiyou’s monument is due Aug. 23, after which any final decision will be in President Donald Trump’s hands.

“He’s the best boss I’ve ever worked for. He doesn’t micromanage,” said Zinke.

Unlike many national monuments, the Cascade-Siskiyou isn’t known for a particular geological feature, but rather for its unique biodiversity.

“Other monuments don’t have the same object,” said Zinke.

Another particular trait of the Cascade-Siskiyou is the large amount of private land that’s enclosed within its boundaries, which can create access problems for landowners, he said.

While he’s prepared to accept the premise that the area’s flora and fauna justify a monument designation, Zinke said the Cascade-Siskiyou’s boundaries seem arbitrary in some areas.

So far, nobody at the Interior Department has taken responsibility for drawing the boundaries or explaining their placement, he said.

“They had nearly no input in drawing the boundaries and that concerns me,” he said.

Any changes to the national monument would be based on science — specifically, which areas contain watersheds, plants, animals, soils and geological features that should be protected, Zinke said.

Zinke is also examining how the boundaries affect traditional economic uses, such as grazing and timber, as well as recreational uses, including hiking, snowmobiling and horseback riding.

A top concern is that managing the land as a wilderness increases the amount of fuels that can contribute to a catastrophic fire, he said.

“Burning habitat down is not acceptable,” Zinke said.

Grazing is an important industry in the region, but it’s also a tool to keep those fuels in check, said Rep. Greg Walden, R-Ore., who accompanied Zinke on the two-day trip.

Legal precedents have made clear that presidents can modify national monuments — it has occurred 18 times in the past, Zinke said.

The law is less certain when it comes to an outright rescission of a monument, Zinke said.

Such a decision would have to be substantially justified by the science, he said.

National monuments have been controversial since the first one — the Devils Tower in Wyoming — was designated by President Theodore Roosevelt in 1906, Zinke said.

Such designations have protected some of the greatest national treasures in the U.S., he said.

At the same time, Zinke said he’s a strong advocate of multiple uses for public lands.

“Public land is not a political issue, it’s an American issue,” he said.

During a stop at Hyatt Lake, which abuts the monument, Zinke was greeted by supporters and opponents of the monument.

Robin Haptonstall said he didn’t believe the expansion was legal because much of it encompassed “O&C Lands” that the federal government dedicated to timber production.

As a rancher, Haptonstall said he’s also worried about the previously proposed Siskiyou Crest National Monument, which could affect his property.

“I’m trying to stop this disease,” he said.

Bonnie Johnson, a monument neighbor who supports the expansion, said the Cascade-Siskiyou is a major tourist draw.

“It’s like a cathedral,” she said. “It’s a spiritual experience.”

The expansion is necessary to ensure the survival of native plants and animals, Johnson said.

“You can’t confine them in a little island of protection,” she said.