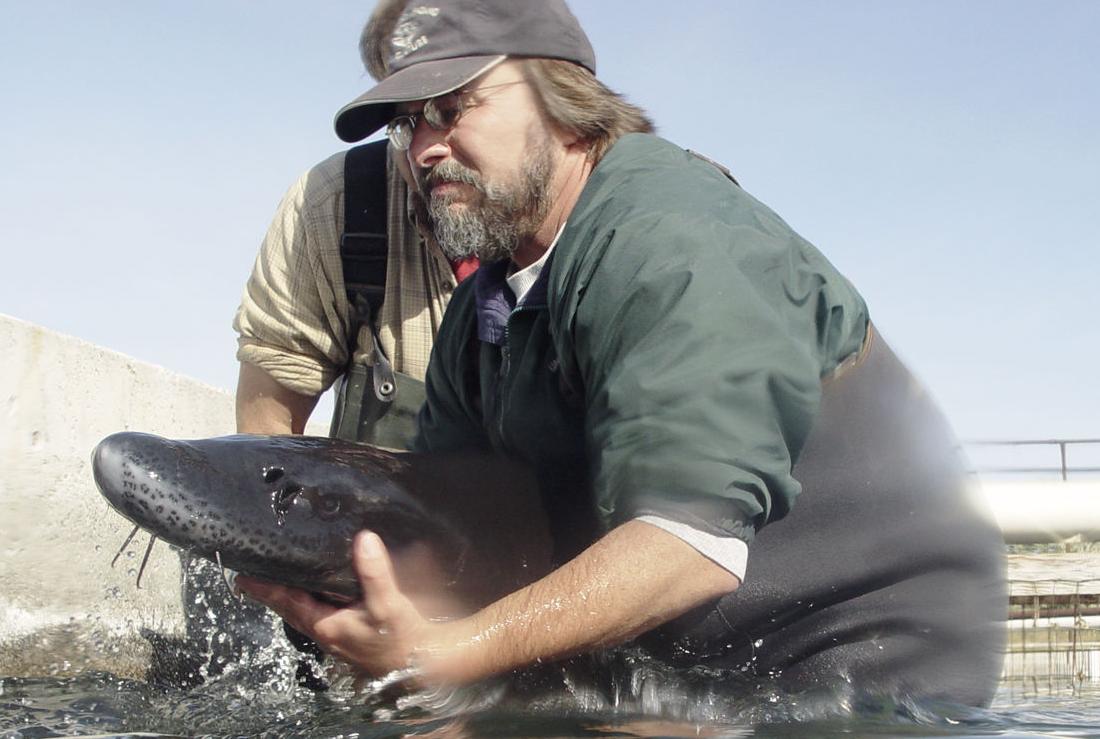 Gary Fornshell, University of Idaho Extension aquaculture educator based in Twin Falls, with a sturgeon. Mackay High School hopes to open the first certified disease-free hatchery at a high school to supply up to 20,000 fish fingerlings a year for state waters.

Gary Fornshell, center right, University of Idaho Extension aquaculture educator based in Twin Falls, shown in May 2018 standing on a scale while holding a dip net containing cutthroat trout.

Gary Fornshell, University of Idaho Extension aquaculture educator based in Twin Falls, with a sturgeon. Mackay High School hopes to open the first certified disease-free hatchery at a high school to supply up to 20,000 fish fingerlings a year for state waters.

Gary Fornshell, center right, University of Idaho Extension aquaculture educator based in Twin Falls, shown in May 2018 standing on a scale while holding a dip net containing cutthroat trout.

Idaho producers grow more than two-thirds of the trout that end up in U.S. grocery stores and restaurants, and Gary Fornshell’s job is to help them understand the economics and possibilities of farm-raising fish.

The University of Idaho Extension’s lone aquaculture educator, Fornshell is involved in two major projects that illustrate the industry’s technical and financial challenges as well as his work’s diversity.

One, a three-year study in its late stages, centers on how regulation impacts U.S. trout farmers economically. The other, a four-year study entering its second year, looks at the biological feasibility of raising burbot on fish farms.

“There is a lot of variety and variability from day to day,” he said of his work. “I work with a number of different areas that the industry has needs for, or priorities in.”

Nutrient discharge and water quality, feed and nutrition, and diseases are other examples of fish farmers’ priorities Fornshell has studied and tracked in 26 years on the job. Work by researchers and the industry in areas like feed and nutrition, and waste management helped fish farms in south-central Idaho exceed an Environmental Protection Agency-required 40 percent reduction in phosphorous discharge into the middle Snake River since the current permit took effect 11 years ago, he said.

Idaho has about 67 fish farms in its south-central region, where the Thousand Springs reach of the middle Snake contributes to ideal conditions, and 10 to 12 others elsewhere.

He said the number of Idaho fish farms decreased by 27 percent from 1998 to 2013 in part because of regulation, which the economic-impact study analyzes.

The study covered more than 94 percent of the U.S. industry and drew a strong 63 percent response rate, Fornshell said.

“While laws and regulations result in clear benefits to society, questions have been raised as to: Have aquaculture and fish farms been over-regulated, causing unintended consequences?” he said. “The study took steps toward addressing this question by collecting and analyzing national data on types and magnitudes of costs faced by trout farmers as they seek to comply with the total set of regulations required for their businesses.”

Maximizing production proved unworkable, at least in the short term. Fish farms’ output instead dropped “because regulatory effects forced them out of markets and also required them to reduce production capacity,” he said.

Regulatory costs are eight times greater on a per-pound basis on small farms compared to large farms, the study found. Fornshell said most fish farms that have gone out of business were small.

“More than half of respondents in the survey knew of farms that had been driven out of business by the regulatory framework they have to operate under,” he said. “And this is occurring at a time when there also is very good demand for trout. That demand is being supplied by an increasing volume of imported trout.”

A potential new species for Idaho fish farms is burbot, also known as freshwater ling. The spotted, sizable fish resemble a catfish in front and an eel in back. The Kootenai Tribe and university researchers in the past 15 years significantly boosted the population of burbot, which spawn in winter in their native Kootenai River.

But burbot enter the world as plankton-eating larvae; for viable commercial production, they must be weaned off plankton and onto finely powdered feed. Fornshell said technology and techniques used for marine aquaculture species with larval stages, such as white sea bass, were adapted to help young burbot make the transition.

The aquaculture program at the College of Southern Idaho in Twin Falls and some local fish farmers are growing burbot on a trial basis in facilities typically used for trout.

Ken Cain, a professor in the UI Fish and Wildlife Sciences Department and associate director of the university’s Moscow-based Aquaculture Research Institute, said in a release that researchers aim to reduce the time baby burbot spend eating live food, either by selecting for quickly growing fish or by introducing smaller dry diets earlier.

Researchers also plan to test how different foods impact growth and health, and to create sterile fish — possibly suited to areas where burbot otherwise may not be allowed, such as where they could escape and become an invasive species.

“What we want to do now is see how well burbot will do on a commercial fish farm,” said Fornshell, who recalled earlier conservation efforts for white sturgeon, now grown for caviar and meat in Idaho and California. “We know (burbot) can grow under the same conditions as trout. We want to look at how well they grow, what size they get to and the efficiency of converting feed into flesh.”

The $417,000 burbot study is funded through the Western Regional Aquaculture Center and a USDA National Institute of Food and Agriculture grant.

A NIFA grant was instrumental in the $221,000 economic-impact study, which also involved Virginia Tech, Oregon State University and the University of California-Davis.