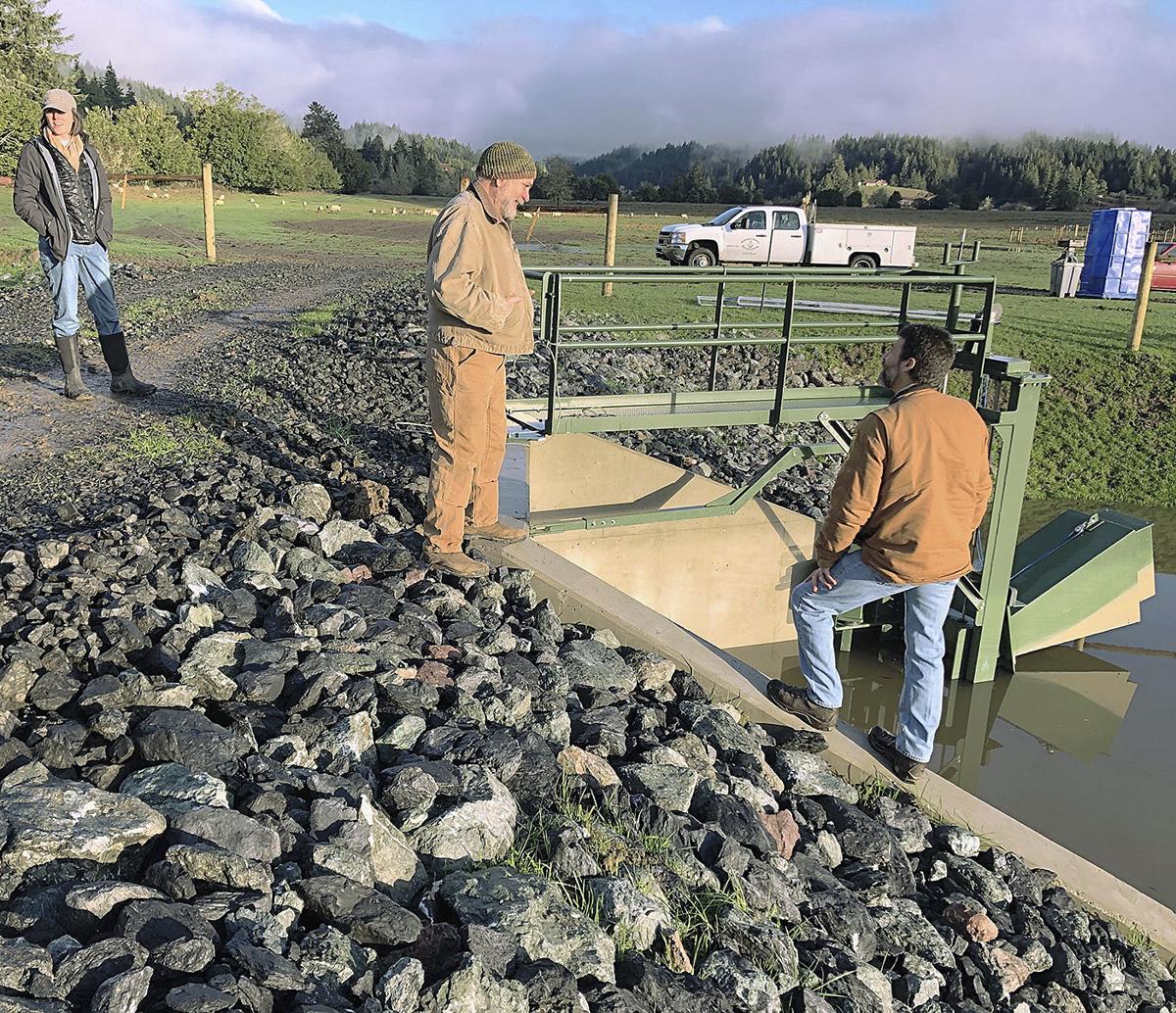 Leo Kuntz, center, at the Seestrom Creek project on the Coquille River, has developed modern tidegates that can maintain both pastures and salmon habitat. Left is Melanie Dunne of the Coquille Watershed Association. Right is Chris Claire, ODFW biologist. 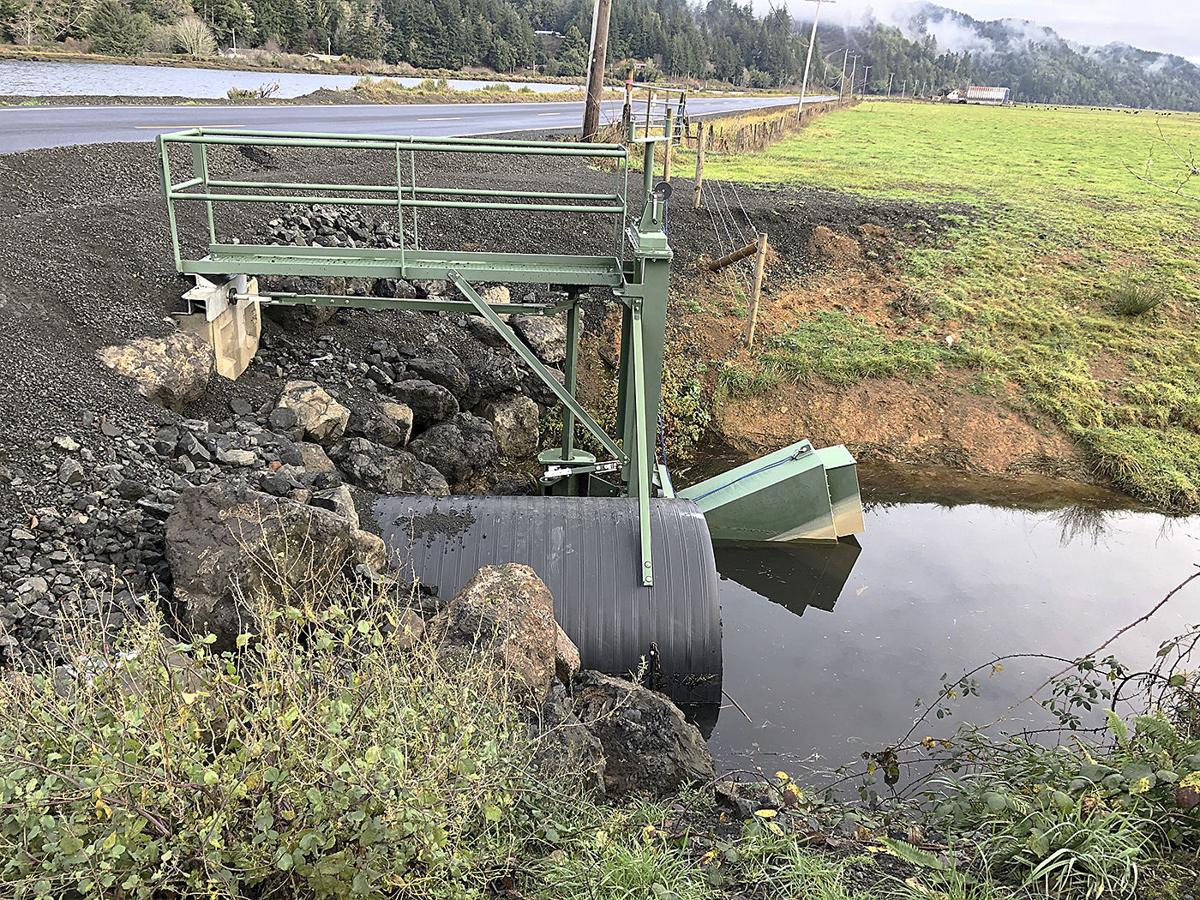 A smaller tidegate with a muted tidal regulator is installed in the road culvert along Coos River.

Leo Kuntz, center, at the Seestrom Creek project on the Coquille River, has developed modern tidegates that can maintain both pastures and salmon habitat. Left is Melanie Dunne of the Coquille Watershed Association. Right is Chris Claire, ODFW biologist.

A smaller tidegate with a muted tidal regulator is installed in the road culvert along Coos River.

COOS COUNTY, Ore. — For more than 100 years, farmers and ranchers on the Oregon coast have installed tidegates to turn estuaries into farmland, inadvertently cutting off young salmon and other fish from their habitats.

Leo Kuntz, a former commercial fisher, boat builder and diver, has been at the forefront of the challenge to invent tidegates that conform to recent laws that require failing gates to be either removed, upgraded or replaced. His innovations have made the owner of Nehalem Marine Manufacturing a hot commodity. In the past 20 years, he’s installed his gates at hundreds of locations along the West Coast between Canada and Mexico.

His latest invention is the tidegate with muted tidal regulators (MTR). The new gates seem to hit all the sweet spots for man and fish, slowing down tidal flow to allow young fish to enter pasture channels, opening the gates for a longer period of fish passage, improving water quality and controlling tidal flooding on the land.

Old-style tidegates featured heavy metal or top-hinge doors that, even when open, posed barriers to the small fish that fed and sheltered in the gated streams and flooded fields. High velocity water through the gates often scoured banks and washed away soil.

“We’re really about finding these win-win opportunities,” said Chris Claire, Oregon Department of Fish and Wildlife biologist who is among volunteer, technical, farming and funding partners installing many of Kuntz’s tidegates along the Coquille River and its tributaries.

State laws, passed in 2001 and enforced beginning in 2008, require gates to be at least 4 feet wide, have open fish passage and a water velocity at or under 2 feet per second at least half the time.

The law is triggered when a gate fails or there are other changes to the culverts that house them. To assess the work ahead, five years ago the Coquille Watershed Association conducted a survey of 120 tidegates in the watershed. As a result, several gate improvements on private and public property are completed or planned.

Coos County landowners are not alone in their need to replace failing tidegates. The effort to modernize gates is coast-wide, Kuntz said.

“Our failing infrastructure has come to a head,” said Melanie Dunne, executive director of the association.

Kuntz recently toured one of the newly installed MTR tidegates controlling tidewater into 125 acres of sheep pasture. Thirteen river miles upstream from the mouth of the Coquille, the Seestrom Creek project is home to 200 head of sheep and five new or repaired tidegates. Future plans for additional tidegate replacement and estuary improvements will expand the project to adjacent agricultural land.

New tidegates and their installations don’t come cheap. Construction of the box culvert on the Seestrom Creek project has cost more than $300,000, in addition to the $70,000 price tag on Kuntz’s innovative equipment.

Smaller culverts with tidegates can cost as little as $10,000 to replace, but still, Kuntz said, the expense is more than most farmers can afford. As result, state, federal and nonprofit funding and technical help underwrite most of the improvements.

Kuntz’s patented invention is called a muted tide regulator because it creates a muted tide cycle inside the gates. This “muted” tide restores much of the habitat value while maintaining the farmland. Unlike traditional gates that are controlled by water levels on the river or bay side of the gate, the MTR gate opens and closes according to the level of the interior waterways. This control allows gate doors to remain open whenever there is a low enough interior water level activate it. Descriptions can be found on Kuntz’s website, www.nehalemmarine.com.

Information about rules, regulations and funding available for tidegates is available from organizations including the Coquille Watershed Association, a non-regulatory group, or from the Oregon Department of Fish and Wildlife, which approves designs and permits.